WASHINGTON — A key player in President Trump’s efforts in Ukraine has significantly revised his sworn testimony, confirming that he helped push a quid pro quo in the country.

U.S. Ambassador to the European Union Gordon Sondland said in a written addendum to his testimony that he told a top Ukrainian official in early September that “resumption of U.S. aid would likely not occur until Ukraine provided the public anti-corruption statement that we had been discussing for many weeks.”

Those remarks dramatically overhaul Sondland’s previous testimony before Congress, and give first-person confirmation of what two other top Trump administration officials testified: that Sondland had directly informed Ukraine that military aid wouldn’t flow unless Ukraine’s government did Trump’s bidding and publicly announce an investigation into Joe Biden, Trump’s 2020 foe, as well as 2016. Both Tim Morrison, a top National Security Council adviser, and Acting U.S. Ambassador to Ukraine Bill Taylor testified the same.

Although Sondland had previously testified to some kind of quid pro quo involving a White House visit and an anti-corruption investigation announcement, he hadn’t made a direct connection to military aid, repeatedly saying in his closed-door testimony on Oct. 17 that he couldn’t recall key events surrounding his involvement in Ukraine. But he claims now that Morrison’s and Taylor’s opening remarks “refreshed my recollection.” His revised testimony confirms key, damning parts of their testimony, including his own direct efforts to push Ukraine to announce a public investigation of Burisma, an energy company where Joe Biden’s son Hunter previously served on the board.

Despite his significant revisions, Sondland continued to maintain that he did not know definitively who held up the aid to Ukraine or why. Instead, by September he “presumed that the aid suspension had become linked to the proposed anti-corruption statement.”

Read: Here Are Some of the Most Disturbing Allegations From The Impeachment Inquiry’s First Transcript Drop

Sondland said last summer that he was given a “special assignment” in Ukraine by Trump even though it’s not an EU member state. He quickly took on greater responsibility in Ukrainian affairs, to the growing concern and bewilderment of U.S. officials responsible for foreign policy there, according to other witnesses’ testimony and documentation of conversations. Multiple officials have testified that he repeatedly raised Burisma and an investigation into a conspiracy theory about the 2016 election during a White House meeting with Ukrainian officials on July 10.

Sondland rose to national attention after contemporaneous text messages between himself and Kurt Volker, a former special envoy to Ukraine, were released in early October. In those text messages, Sondland can be seen pushing for Ukraine to give Trump what he wanted — “I think POTUS really wants the deliverable,” he texted Volker on Aug. 9. In the same conversation, he suggested asking to see a draft statement from Ukraine’s president.

Later, he insisted there was “no quid pro quo” between Ukrainian military aid and an investigation into Joe Biden and his son Hunter — comments he testified were relayed to him in a direct conversation with President Trump. It’s hard to square those previous claims with what he’s now testified under oath at the risk of perjury.

The “continuum” of cash for dirt

In Sondland’s first round of testimony, he described the negotiations as a vague “continuum” of increasingly detailed requests from Rudy Giuliani.

“It started as talk to Rudy [Giuliani], then others talk to Rudy,” he said. “Corruption was mentioned. Then, as time went on — and, again, I can’t nail down the dates — then let’s get the Ukrainians to give a statement about corruption. And then, no, corruption isn’t enough, we need to talk about the 2016 election and the Burisma investigations.”

Sondland initially claimed that others, specifically, Senator Ron Johnson (R-Wis.) and Ambassador Taylor, suggested to him that there may be some kind of a link between holding up aid to Ukraine and the important diplomatic gesture of a White House visit.

“At the end of the continuum I became aware that there might be a link between the White House visit and aid to the Ukraine that was being held up,” Sondland originally testified. “When I couldn’t get a straight answer as to why the aid was being held up, both Senator Johnson and Ambassador Taylor raised the possibility that there might be a link.”

But at the time, he couldn’t quite remember all the details, he claimed.

“And then the aid was released, and then this whole thing blew up,” Sondland said during his first round of testimony. “That’s the best I can recall the sort of progression.”

He did acknowledge, however, that at some point he figured out that Trump and Giuliani’s interest in investigating the Ukrainian gas company Burisma really meant investigating the Bidens — and said he viewed such a request as improper.

Near the end of the transcript of his deposition, he says so explicitly in an exchange with Rep Raja Krishnamoorthi (D-Ill.) that reads:

— KRISHNAMOORTHI: “Sir, one last question, which is: Do you believe that, with regard to Burisma, that the effort by Giuliani to investigate Burisma, now that we know that it was actually intended to go after Mr. Biden’s son Hunter, was ever a proper inquiry?”

— SONDLAND: “I mean, I think I testified to that at the beginning, that it would not be proper.”

— SONDLAND: “Again, I’m not a lawyer. I don’t know the law exactly. It doesn’t sound good.”

Cover: Gordon Sondland, the U.S. ambassador to the European Union, arrives at the Capitol to review transcripts of his earlier testimony in the impeachment inquiry of President Donald Trump, in Washington, Monday, Oct. 28, 2019. (AP Photo/J. Scott Applewhite) 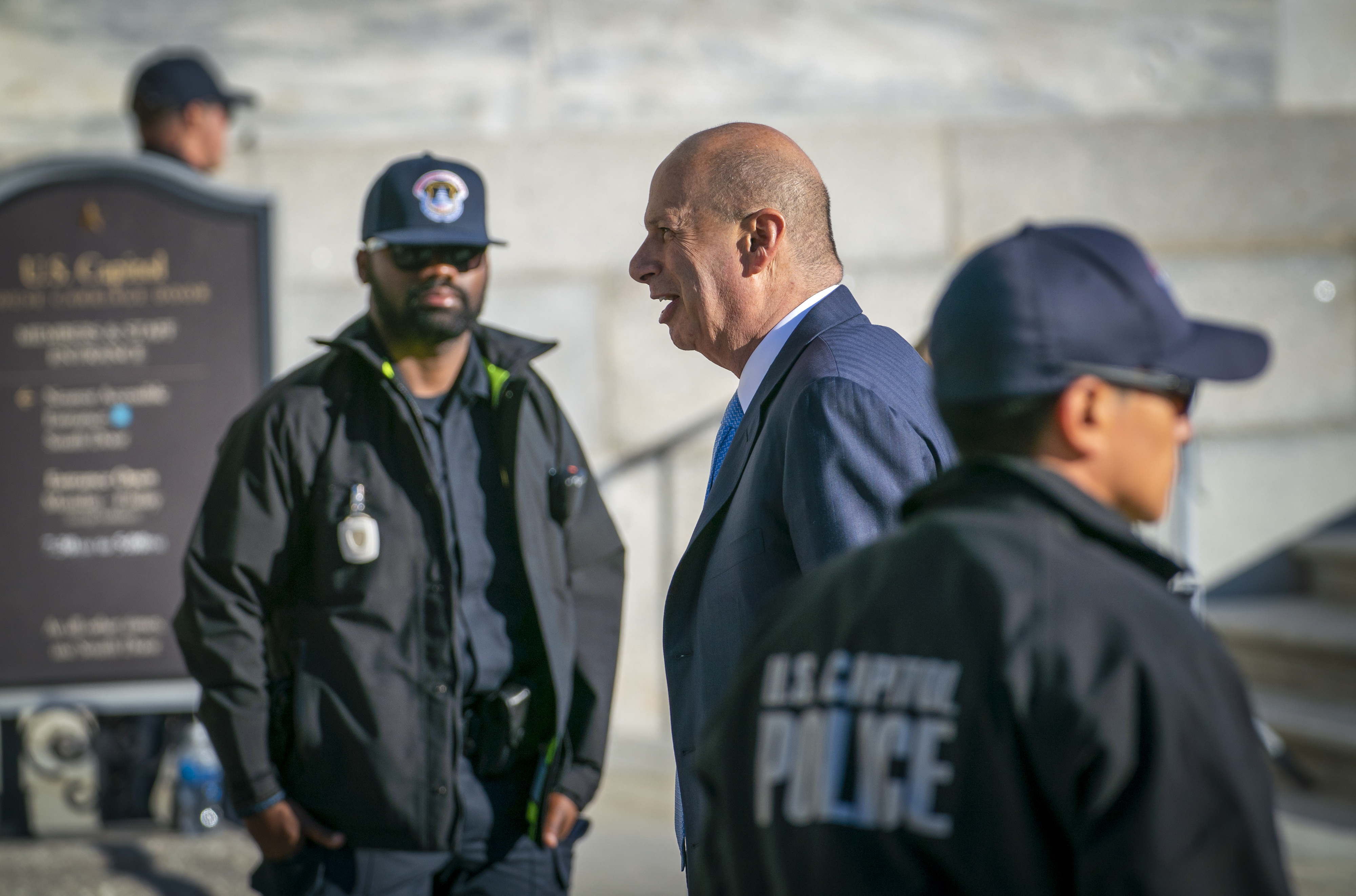