When the Keystone Pipeline burst last week, half of an Olympic-sized swimming pool’s worth of a particularly dirty fossil fuel spilled into wetlands in North Dakota. And the thick liquid, known as tar sands oil, will be nearly impossible to clean up.

The spill realized some of the biggest fears of the pipeline project, which was approved in 2006 — despite opposition from farmers, indigenous groups, and environmental organizations — and started pumping oil back in 2010. The Keystone Pipeline carries oily sludge from the enormous tar sands fields in Alberta, Canada, across more than 2,000 miles of pristine wetlands in the Dakotas, through Nebraska to Patoka, Illinois.

The company, TC Energy, formerly TransCanada, projected that the pipeline would spill just 11 times over the course of 50 years, or about once every seven years. Since it started pumping, it’s already spilled four times.

”I would tell you that’s the worst-case scenario.”

Tar sands oil is a mixture of clay, water, and a thick, heavy oil called bitumen, the sticky stuff that binds cement together. The oil gets dissolved in a cocktail of chemicals, called diluent, to allow it to flow through a pipeline. (Imagine trying to suck peanut butter through a straw; that’s what pumping bitumen through a pipeline would be like without diluent.) Together, the combo of bitumen and diluent is called “dilbit.”

TC Energy estimates that 383,000 gallons of the particularly sludgy tar sands oil spilled out of their pipeline on Oct. 29, near Edinburg, North Dakota, a rural town with a population of less than 200 on the edge of farmland and prairies.

“Once bitumen sinks to the bottom of a lake or wetland, it is much more problematic to clean up than conventional oil, which floats nicely and can be skimmed off the surface,” Diane Orihel, a professor in aquatic ecotoxicology at Queen’s University, told VICE News.

The wetlands in the Dakotas, fertile breeding grounds for migratory birds like Canada geese and the American bittern, have already been widely drained out for agriculture. They once covered about 10% of the state; half were wiped out over the course of the 20th century to create more farmland. Only about 2.7 million acres of wetlands remain.

When tar-sands oil leaches into wetlands, they’re just about impossible to restore entirely.

“Wetlands are a fragile environment, the most sensitive,” said Michel Boufadel, a professor of Civil and Environmental Engineering at the University of New Jersey Institute of Technology. “On the other extreme is rocks.”

“So if you told me there’s an oil spill in wetlands, I would tell you that’s the worst-case scenario,” added Boufadel, who worked with the EPA on the cleanup of a previous tar-sands oil spill in Kalamazoo, Michigan.

Cleaning up the wetlands could involved digging them up to get at the bitumen that’s sunk in. But that risks damaging the wetland in the process of trying to save it.

“One of the larger ones”

These kinds of pipelines are built to spill. But just how big the spills are can be tricky to estimate, and the company has a vested interest in not alarming the surrounding community.

Of the four times Keystone has spilled large amounts of oil, the most recent incident is currently estimated to be the second-biggest. And with each of the prior spills, initial estimates drastically lowballed the amount.

“This one would be one of the larger ones in volume that we’ve had in my time,” said Karl Rockeman, the director of the state Department of Environmental Quality’s division of water quality.

Two years ago, when the Keystone Pipeline burst in South Dakota, the company initially said that 210,000 gallons of oil had spilled. It turns out that TC Energy dumped twice as much oil into the serene South Dakota landscape.

Rockeman doesn’t expect any major adjustments to the estimates of how much oil spilled this time. The company, he said, has provided an adequate justification for their current figures, which are already high. That doesn’t mean the estimates won’t be revised, though.

“It’s important to remember that as new data becomes available, and as a spill progresses, those numbers can change,” he said. “I think as we go forward, we might see some adjustments to that volume, but not a large change.”

Eating through a pipeline

At the mines in Alberta, the oily tar sands get shoveled out of huge, open-air pits, carted to a plant, and dropped into a big cone-shaped vessel. There, using huge amounts of hot water, the bitumen is separated from the sand and clay.

Extracting, refining, and burning this type of oil sends more carbon emissions into the atmosphere than crude oil. One barrel’s worth of tar sands oil produces about 20% more greenhouse gas emissions than a barrel of conventional oil.

Once refined through that energy-intensive process, the sludge makes its way into a pipeline.

Tar sands oil is also more corrosive than traditional crude oil, in part because, its thickness requires staying hot and diluted with a chemical cocktail to allow it to flow through the pipeline. If water gets into the mix, the oil becomes especially corrosive, according to Boufadel.

That increases the likelihood that tar sands oil will eat its way through a pipeline’s steel. A study found that pipelines carrying tar sands oil through the Midwest burst three times as often as those carrying conventional oil, according to the National Resources Defense Council.

TC Energy hasn’t said what caused this particular spill — but the last big one in 2017 was the result of damage done to the pipeline during its construction, according to a federal investigation.

For now, no one but regulators and the company have been allowed to inspect the site of the spill. Activists and environmentalists are predictably concerned that the spill is way bigger.

Joye Braun, the first camper at Standing Rock, a protest organized to oppose an extension of the Keystone Pipeline, said she felt she’d be risking arrest if she attempted to get close to it.

“What we know is that these spills tend to be dramatically worse than initial estimates,” Collentine said. “And even if we already have the information for the true amount that’s spilled, the impacts are serious.”

For Native Americans in the Dakotas like Braun, these spills are deeply personal.

“This is our homeland, this is our DNA –has been here for millennia,” Braun said. “Long after the United States and North Dakota is long gone, we’re still going to be here. And we’re going to have to clean this up.” 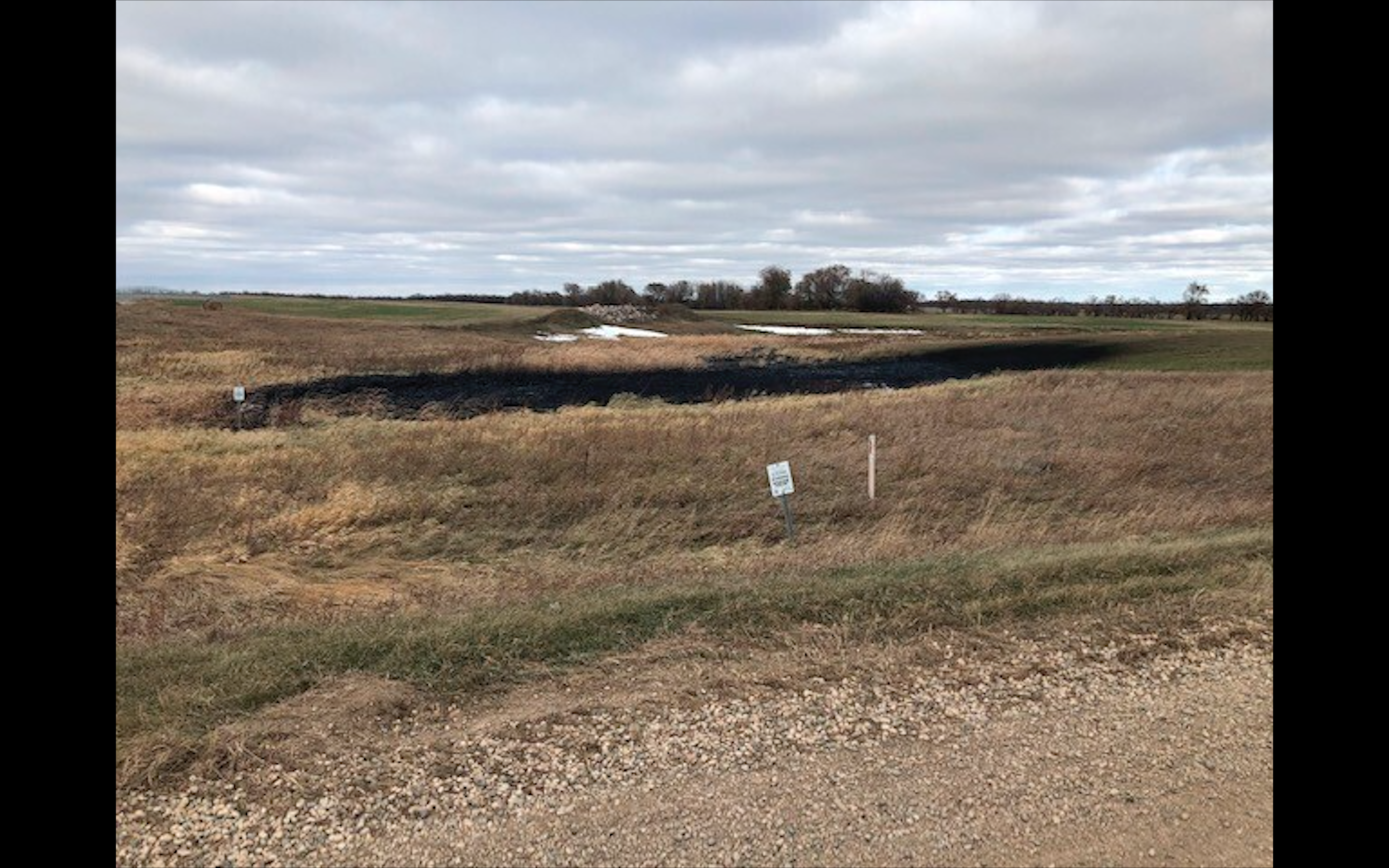