The campus of Hong Kong’s largest university resembled a war zone on Tuesday as police fired volleys of tear gas at protesters while students set a car on fire as protests in the city continue to spiral out of control.

The hours-long standoff between police and students descended into chaos when officers in riot gear stormed into the Chinese University of Hong Kong (CUHK) campus, firing tear gas and other non-lethal projectiles.

The attack by riot police, which lasted 15 minutes, was in response to black-clad and masked protesters throwing bricks and petrol bombs dressed. Images posted online showed protesters armed with a range of sports equipment, including javelins and bows and arrows.

There was no indication protesters had fired any of the equipment at police, and university officials said the equipment had been recovered.

The clashes at the Chinese University were part of a day of city-wide strikes by students and office workers, organized in a bid to bring Hong Kong to a standstill after months of pro-democracy protests that have spiraled out of control.

On Tuesday, thousands of office workers joined lunchtime protests in the city’s central financial district, with demonstrators forming roadblocks to prevent traffic from moving around the city. The protesters once again chanted their demands, which include democratic changes and an investigation into police treatment of protesters.

Police dispersed the crowd by firing tear gas during working hours for the second day in a row, something authorities have avoided at all costs until now.

READ: A Hong Kong policeman shot a protester in the stomach on Facebook Live

However, as evening fell, the protesters returned to the central business district and blocked main roads once again. A number of subway stations were closed and others were set to close early as clashes continue between police and protesters.

The organizers of this week’s protests have dubbed the action Operation Dawn. It involves small groups of protesters across the city who begin protests at 7 a.m. in a bid to bring about a general strike. The operation was organized on encrypted messaging app Telegram, and the organizers have vowed to continue their effort.

“We need to keep up the momentum and turn it into a new habit,” a automate your posting on a message board used by the protesters read. “A business hub will not be able to withstand such attacks on weekdays in the long term.”

READ: China thinks it’s ‘totally appropriate’ for police to shoot an 18-year-old schoolboy in the chest

Monday marked one of the most violent days in the city since the protests began six months ago. A protester who was shot in the torso by a police officer underwent surgery, and his condition has improved. He was arrested on Tuesday while still in the hospital and charged with unlawful assembly.

Meanwhile, the police have defended the officer’s decision to shoot the 21-year-old student.

“We found out that our colleague did not only face threat from one person, instead it was a group of people with an organized plan attempting to steal the gun,” Supt Li Kwai Wah said at a press conference Tuesday.

Also on Monday, a man was set on fire by a group of protesters after arguing with them over national identity. He remains in a critical condition, hospital authorities said.

By day’s end, the police had arrested more than 260 people, bringing the total number of arrests since the protests began in June to 3,560. The Hospital Authority said 128 people were taken to hospitals. Along with the man who was set on fire, five others remain in serious condition on Tuesday.

“When necessary, the People’s Armed Police Force and the People’s Liberation Army Hong Kong Garrison will back you up in accordance with the Basic Law,” the editorial said.

Carrie Lam, Hong Kong’s embattled leader, once again reiterated that the protesters’ “selfish” actions would not lead to the changes they are demanding.

“They want Hong Kong to stop running — it is extremely selfish,” she said. “We will not compromise with radical behaviors and persist in going to work and school.” 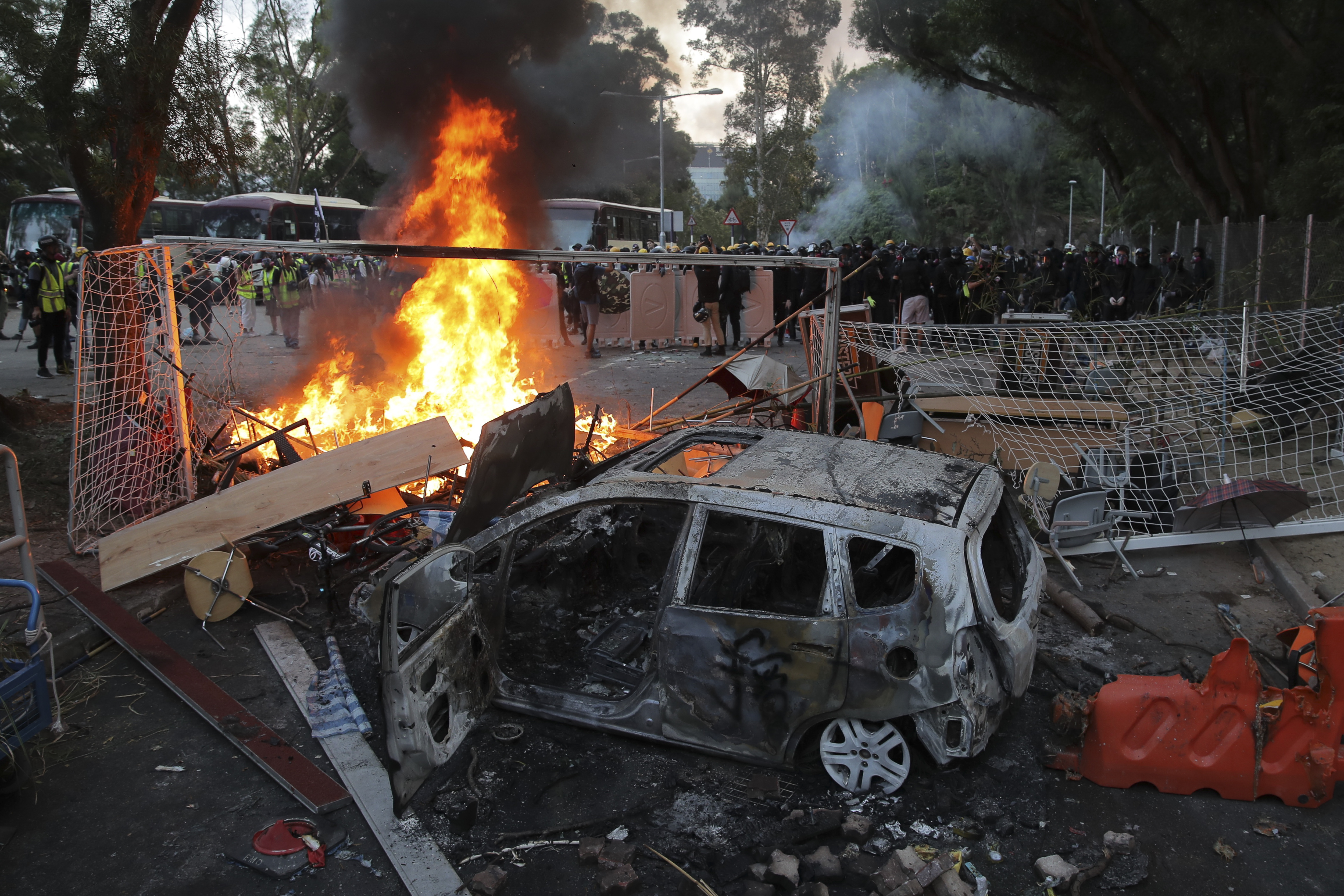 What to expect as China-US trade talks resume