It’s not looking so good for the Dreamers.

Conservative Supreme Court justices appeared to side with the Trump administration Tuesday as it argued its case for ending DACA, the Obama-era program that protects young immigrants with no criminal record from deportation.

For over two years, the Trump administration has fought to dismantle the program, whose recipients are dubbed “dreamers,” despite providing little explanation for its decision to do so.

A Sept. 2017 memo published by the Department of Homeland Security gave no policy reason for its termination, and former DHS Secretary Kirstjen Nielsen merely said it was inconsistent with the country’s immigration policy.

President Trump has subsequently called DACA unconstitutional, and said it couldn’t be defended in court.

On Tuesday, conservative justices appeared to buy those arguments.

In a prolonged exchange, Justice Neil Gorsuch pushed back against the lawyer arguing on behalf of DACA beneficiaries.

“I hear a lot of facts, sympathetic facts, you put out there, and they speak to all of us,” Gorsuch said, before going on to ask why the administration doesn’t have the authority to decide how it enforces the law.

And Chief Justice John Roberts seemed to imply that ending DACA wouldn’t pose a significant threat to the legal status of the immigrants it protects, because Trump has said he is willing to negotiate a deal for them to stay in the U.S.

Should the court rule that the Trump administration was justified in dismantling the program, it could affect the legal status of nearly 700,000 people, most of them women, and the vast majority of them under 25.

But beyond DACA itself, experts worry that, should the court the Trump administration’s arguments, it sets a precedent for other unrelated lawsuits in other areas where the White House has given thin justification for a change in policy.

“The primary explanation accorded by the administration was so sparse, and really almost negligible,” Avidan Cover, an associate dean at Case Western University’s law school, told VICE News ahead of the arguments on Tuesday. “For the court to allow that to go forward as a policy, on that thin reed, [there’s] virtually no reasonable explanation.”

“From environmental regulations to transportation, it can affect everything throughout the country,” he said.

The lawyer arguing on behalf of the Trump administration, Solicitor General Noel Francisco, dismissed that argument in court.

“DACA was a temporary stopgap measure that, on its face, could be rescinded at any time,” Francisco said on Tuesday. “And the Department’s reasonable concerns about its legality and its general opposition to broad non-enforcement policies provided more than a reasonable basis for ending it.”

The Supreme Court has previously upheld the Trump administration’s immigration policy, including its so-called “travel ban” that prevented people from several predominantly Muslim countries from entering the U.S.

Cover said he wouldn’t be surprised if the court eventually ruled that, because presidents have significant leeway to shape immigration policy, Trump has the power to end the program. He added that the court might plausibly argue that “Obama went one way [with] DACA, and Trump has the same power to take it away.”

“Either way, even if they don’t go that far, DACA ends,” Cover said. “And then, in theory, they start deporting people, people start losing their benefits and legal status, and certainly everyone lives in fear. That’s horrible in and of itself.”

Cover: Hundreds of people gather outside the U.S. Supreme Court to rally in support of the Deferred Action on Childhood Arrivals program as the court hears arguments about DACA November 12, 2019 in Washington, DC. (Photo by Chip Somodevilla/Getty Images) 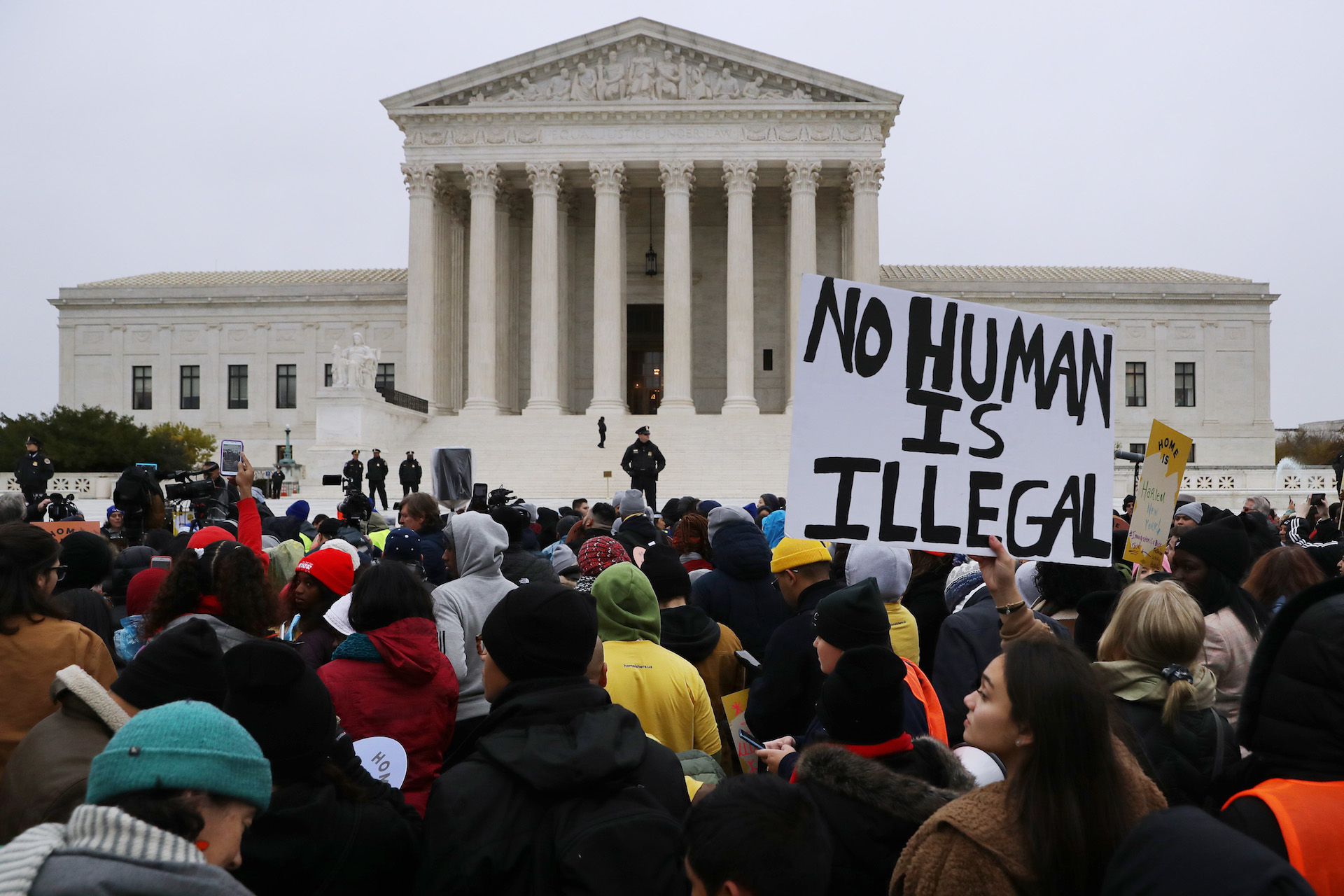 Coronavirus: A fifth of smaller UK firms ‘will run out of cash’