As the Supreme Court prepares to hear a new abortion case and Missouri teeters on the brink of losing its last abortion clinic, the U.S. House called a hearing Thursday to learn more about abortion access. They got three hours of veiled insults, references to “The Handmaid’s Tale,” and a rehashing of basically every single skirmish in the American fight over abortion.

The hearing was ostensibly focused on state efforts to limit access to abortion. But legislators and witnesses brought up everything from the “Born Alive Abortion Survivors Protection Act” to the disposal of fetuses to the United States’ persistently high maternal mortality rate. The House Committee on Oversight and Reform room was packed, and tensions were high: Republicans spoke of babies being killed, while Democrats argued that Republicans don’t do enough to care for children once they’re actually born.

Over the last year, a handful of states across the South and Midwest have passed laws that would ban abortion as early as six weeks into a pregnancy. But the hearing often fixated on Missouri, which may soon become the first state since Roe v. Wade, the Supreme Court decision that legalized abortion nationwide, to have zero abortion clinics. Here are some of the biggest moments from the hearing.

Missouri’s last abortion clinic squared off against the state in a hearing late last month to determine whether it could keep its license to perform abortions. A bizarre detail emerged: The Missouri state health department’s director testified that the agency kept a spreadsheet of the menstrual cycles of Planned Parenthood patients.

That detail came up early and often in Thursday’s hearing. Missouri Rep. Lacy Clay — who had originally pushed for the hearing — brought it up in his opening remarks.

“I am truly amazed that the Missouri department of health went along with efforts to shut down the clinic, intimidate patients, and threaten providers, and allegedly and bizarrely track women’s menstrual periods on spreadsheets to determine if they had had an abortion,” he told the room. “No woman should be subjected to this violation of her personhood.”

READ: This state could become the first without an abortion clinic.

Maryland Democratic Rep. Jamie Raskin, meanwhile, compared Missouri to something out of “1984” and “The Handmaid’s Tale.” “Big Brother seems to have come to Missouri,” he declared. “All of our colleagues who like to strike a libertarian note when it comes to people possessing AR-15s and military-style assault weapons, the kinds that are wreaking havoc across the land, suddenly become the champions of leviathan, Big Brother, Gilead, and the all-powerful state.”

Dr. Colleen McNicholas, chief medical officer at the Planned Parenthood of the St. Louis Region and Southwest Missouri as well as an abortion provider at the clinic fighting with Missouri, also talked about how the state had temporarily forced the clinic to perform multiple pelvic exams on women who wanted abortions. McNicholas said the requirement was medically unnecessary, and mentioned a patient was a minor who’d been sexually assaulted. She’d never had a pelvic exam before and “didn’t even know what her parts were,” McNicholas said.

“In the times when we had to comply with this regulation, I’m not sure who cried more — the physicians, the staff, the patients,” McNicholas said. “We had patients apologizing to us.”

Republicans tried to tear down a Planned Parenthood abortion provider

Republicans did not hide their hostility towards McNicholas, the first physician to publicly testify before Congress on Planned Parenthood’s behalf since 1995. At one point, after reading a snippet of the medical ethics oath, North Carolina Republican Rep. Virginia Foxx asked, “Dr. McNicholas, did you swear a Hippocratic oath when you were licensed?”

“I did,” McNicholas said. “I continue to live that every single day.”

“I’m not sure how I would even quantify that,” McNicholas replied.

READ: These 5 states are the next battlegrounds in the abortion wars.

Massie then sought to pin McNicholas down on whether she would be willing to abort a fetus after it becomes viable. McNicholas tried to explain that viability can vary from pregnancy to pregnancy.

“You seem to have a hard time saying this. This tells me you have a heart, or at least you know that people watching this have a heart,” Massie told her eventually. “And they would be concerned if you would just admit, which you won’t admit here, that you would abort a viable fetus for any reason if the law did not prevent it.”

“Mr. Massie, abortion is moral,” McNicholas replied. “It is important, it is healthcare, and I support people being the experts in their own lives and making decisions for themselves.”

After the hearing, McNicholas told VICE News that she had “absolutely” been prepared to be attacked by anti-abortion legislators. “But the reality is that abortion is healthcare. And no matter how they [abortion opponents] try to oversimplify what can be complicated occurrences in pregnancy, I think the general public is smarter than that.”

Six states, including Missouri, now have just one abortion clinic.

“The greatest act of love”

One of the most emotional moments in the hearing happened in its first few minutes: Jennifer Box, a small business owner from Missouri, shared the wrenching story of how she decided to get an abortion.

“Our daughter, if not stillborn, would be born into a life of immediate and repeated invasive medical intervention,” Box said. “She essentially would have been born onto life support. With broken hearts, we knew that the greatest act of love that we could undertake as her parents would be to suffer ourselves instead.”

READ: Why abortion foes are psyched about the new supreme court case.

But Box could not get care at the Catholic hospital that had delivered her older children, she said. She had to paid thousands of dollars out-of-pocket because Missouri largely bans people from using insurance to cover abortions. And she had to time her abortion to comply with a state law that mandates women wait 72 hours after an initial consultation to get the procedure.

“I moved at the direction of the government,” Box said.

Later on during the hearing, Box confronted Allie Stuckey, a self-described author and podcaster who served as the witness for the minority. Stuckey, who opposes abortion, frequently cast the procedure as killing babies.

“I actually did not say the term ‘murderers,’ to my recollection, and I don’t think that me being passionate about the subject — which we do disagree on — means that I disrespect you,” Stuckey shot back several minutes later. “I just care about life inside the womb and protecting babies unborn.”

Cover: Abortion-rights supporters stand on both sides of a street near the Gateway Arch as they take part in a protest in favor of reproductive rights Thursday, May 30, 2019, in St. Louis. A St. Louis judge heard an hour of arguments Thursday on Planned Parenthood’s request for a temporary restraining order that would prohibit the state from allowing the license for Missouri’s only abortion clinic to lapse at midnight Friday. (AP Photo/Jeff Roberson) 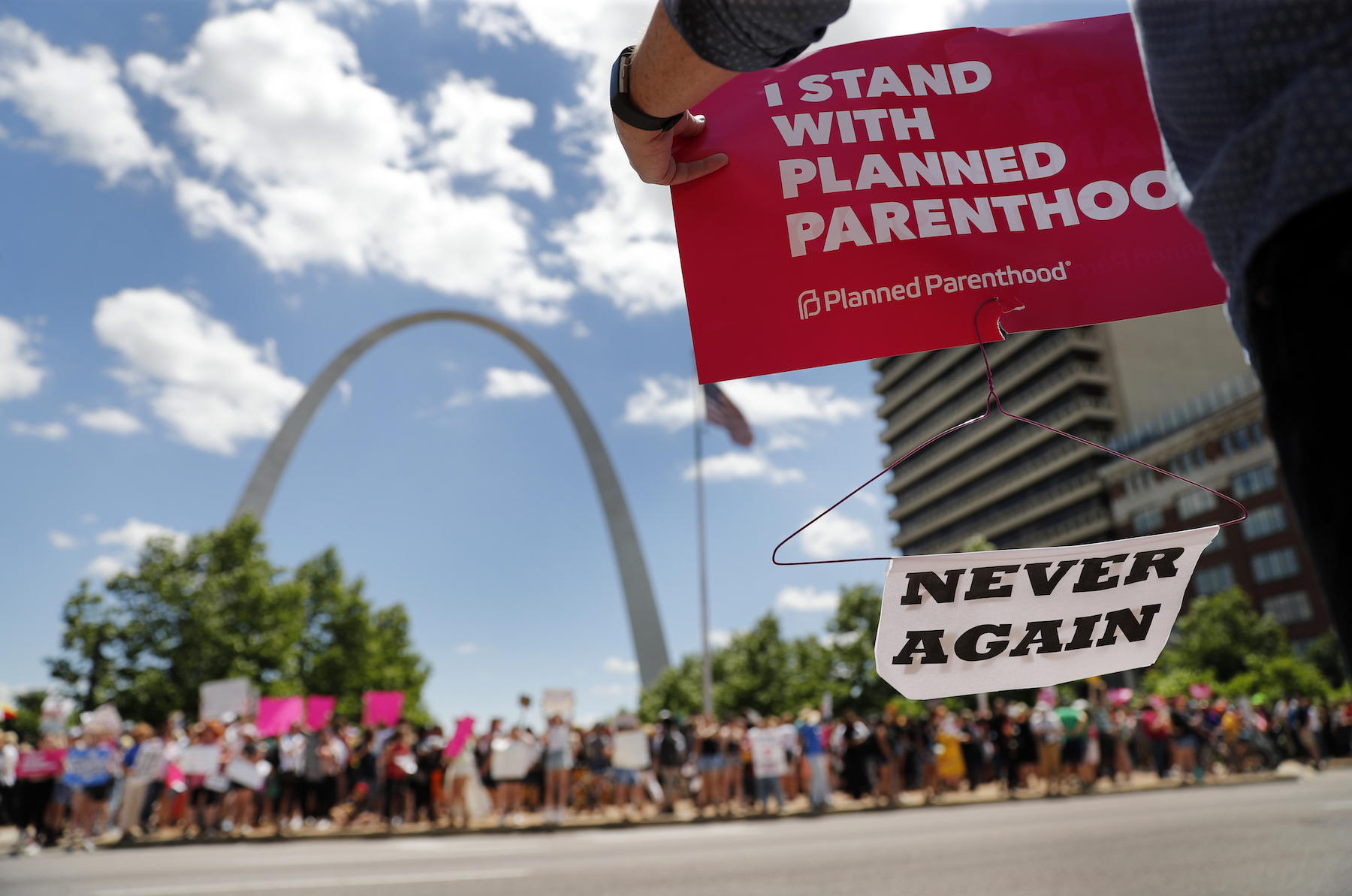 Hero, A new perfume launched in gratitude for those on the frontline