WASHINGTON — Democrats pulled off an upset win to take back Kentucky’s governorship earlier this month. So Kentucky Gov. Matt Bevin tore a page out the Republicans’ playbook by insinuating voter fraud, refusing to concede, and claiming “a number of irregularities” cost him the election.

Call it the sore loser strategy, one that has become commonplace in the Trump era. Trump has long promoted conspiracy theories and made sweeping and baseless claims about voter fraud, which raises a question for 2020: What if President Trump loses and refuses to concede?

Experts fear at minimum it would further damage voters’ trust in democracy and at worst lead to a constitutional crisis.

“There are reasons to be concerned,” said Ned Foley, a constitutional law professor at the Ohio State University who specializes in the history of American contested elections. “Trump has talked about voter fraud in a way that’s not really reality based. That creates a reasonable fear that he might want to reject numerical results that are objectively [correct].”

Trump has hinted before that he’d reject any election loss.

In 2016, he repeatedly claimed a “rigged” election was being “stolen” from him, asked his supporters to monitor urban voting booths and suggested that “the Second Amendment people” take matters into their own hands if Hillary Clinton won the election. During the final debate, he refused to say he’d accept the results if he lost. “I will keep you in suspense,” Trump said.

Even in victory, Trump obsessively and falsely insisted that he’d carried the popular vote as well “if you deduct the millions of people who voted illegally.” He even set up a bogus, taxpayer-funded voter fraud commission to back up his claim. That commission turned up nothing and quietly disbanded after more than a year of controversy.

In 2018, he claimed “electoral corruption” when GOP Senate nominee Martha McSally fell behind in Arizona after leading on election night and “election fraud” when now-Sen. Rick Scott’s (R-Fla.) lead shrank as late votes were counted. Last August, Trump claimed he should have won New Hampshire in 2016 if “thousands and thousands of people coming in from locations unknown” hadn’t shown up to vote.

In recent weeks he’s called the House impeachment investigation a “coup,” accused his opponents of “treason,” and tweeted a comment made on Fox News by a controversial pastor that his removal from office would “cause a Civil War like fracture.”

Experts are worried about where Trump is headed. Duke University Professor Peter Feaver, a former member of the National Security Council under President George W. Bush, is concerned enough that he’s organized a Nov. 25 conference to discuss “best practices” for administrations to “simultaneously campaign to win reelection and prepare to hand over power in case you lose.” Former Obama White House Chief of Staff Dennis McDonough and former Bush 43 White House Chief of Staff Joshua Bolten are the featured speakers.

Feaver said Trump’s rhetoric is at the very least “deeply irresponsible,” and warned that foreign actors who seek to damage America will look to amplify any claims of fraud, as Russia did in 2016. His worst-case scenario is a “genuine constitutional crisis” where a state’s results are in dispute, either because of foreign interference or because one party’s nominee simply refuses to concede and seeks to “work outside the constitution to hold power.”

READ: Trump Tried to Intimidate Marie Yovanovitch as She Testified About His Intimidation

“We’re not there yet and we’re not particularly close to it, but we’re at a stage where it’s reasonable to just say ‘calm down, folks.’ This kind of rhetoric leads in a bad direction,” Feaver warned.

What happened in Kentucky

Bevin, for his part, threatened to fight on, but he ended up quietly conceding after more than a week when a statewide recanvass of ballots showed almost no changes in the vote count. But rather than congratulating his opponent, he instead left with a parting shot, casting doubt on the democratic process.

“If the people lose confidence in their ability to actually know that the vote they cast is the one that was tabulated for the person they intended it to be for… we lose something in America,” he said.

Trump, mysteriously, didn’t go to war for Bevin the way he has for other allies. He declined to boost Bevin’s claims of fraud and instead argued without evidence that his last-minute campaign rally for the governor helped Bevin close a 19-point gap in the polls (no such deficit ever existed in public polling).

That may be because Bevin, as governor, can’t help him directly the way that senators can. He also wasn’t particularly close to Bevin, and his aversion to losers may have turned him off from helping more — Trump’s team notably left Bevin off their list of honorary reelection co-chairmen when they included almost every other Kentucky elected official. Or maybe he was just too busy worrying about impeachment.

But other conservative activists stepped up. A wealthy conservative Bevin ally funded robocalls in the state asking voters to report “suspicious activity” and “suspected voter fraud.” Judicial Watch President Tom Fitton’s tweet that “Kentucky has weak voter id and dirty election rolls” got more than 10,000 retweets. Right-wing Twitter activists and bots amplified an obvious fake account that claimed to have destroyed GOP ballots in the state.

Bevin conceded only after his party refused to stand with him. Republicans have a super-majority in both chambers of the state house and could have stepped in to overturn the election, but they didn’t. Senate Majority Leader Mitch McConnell (R-Ky.), who Bevin ran against in 2014, said Bevin should concede if the recanvass didn’t go his way.

But Bevin is widely disliked within his own party. Trump, meanwhile, has a firm grip on the Republican base in 2019.

The president’s margins in Wisconsin, Pennsylvania and Michigan were all less than one percentage point when he won in 2016, and recent polls show tight contests there once again. Arizona, another potential tipping-point state, is notoriously slow at counting votes because of its reliance on mail-in ballots. It often takes days or even weeks to know who’s won in close elections there.

The worst-case scenario would be a real constitutional crisis where a key state’s results are legitimately in question. Florida’s 2000 election results are the closest modern analogy, but things could get even worse than that. If both sides dig in a state with split political control, there could be two different, competing certified election results — one signed by the secretary of state and another backed by the state legislature.

The last time that happened was in the 1876 presidential election, which ended in controversy and a deal with the devil where Republican Rutherford B. Hayes traded away reconstruction for the White House. If a similar thing happens where a state submits two competing vote certificates, Congress determines which one they accept — and if the Senate stays in GOP control and the House in Democrats’ hands, it’s unclear how they’d solve anything.

“The kind of thing that happened in 2018 in Arizona could spin out of control and take a dispute all the way to Congress. If the Senate went one way and the House goes the other way it could get very ugly,” said Foley.

If Trump has clearly lost and refuses to concede, it’s less likely that his whole party would rally around him to try to upend the election results. Bevin isn’t the only recent case where this happened — Alabama Republican Roy Moore and Georgia Democrat Stacey Abrams are two other recent examples (though Abrams had much more legitimate complaints than the others).

But any claim from Trump that the election is rigged could prove unusually dangerous even if his party doesn’t go along. There’s been an uptick in white supremacist violence in recent years and a spike around 2018 elections with the Pittsburgh synagogue shooting and the mail bombs a Trump supporter sent to a bevy of Democrats and media outlets.

“If it’s close, where Trump refuses to accept results… the [white supremacist] movement will be riled up and the possibility for violence will be high,” said Heidi Bierich, an expert in white supremacist violence at the Southern Poverty Law Center. 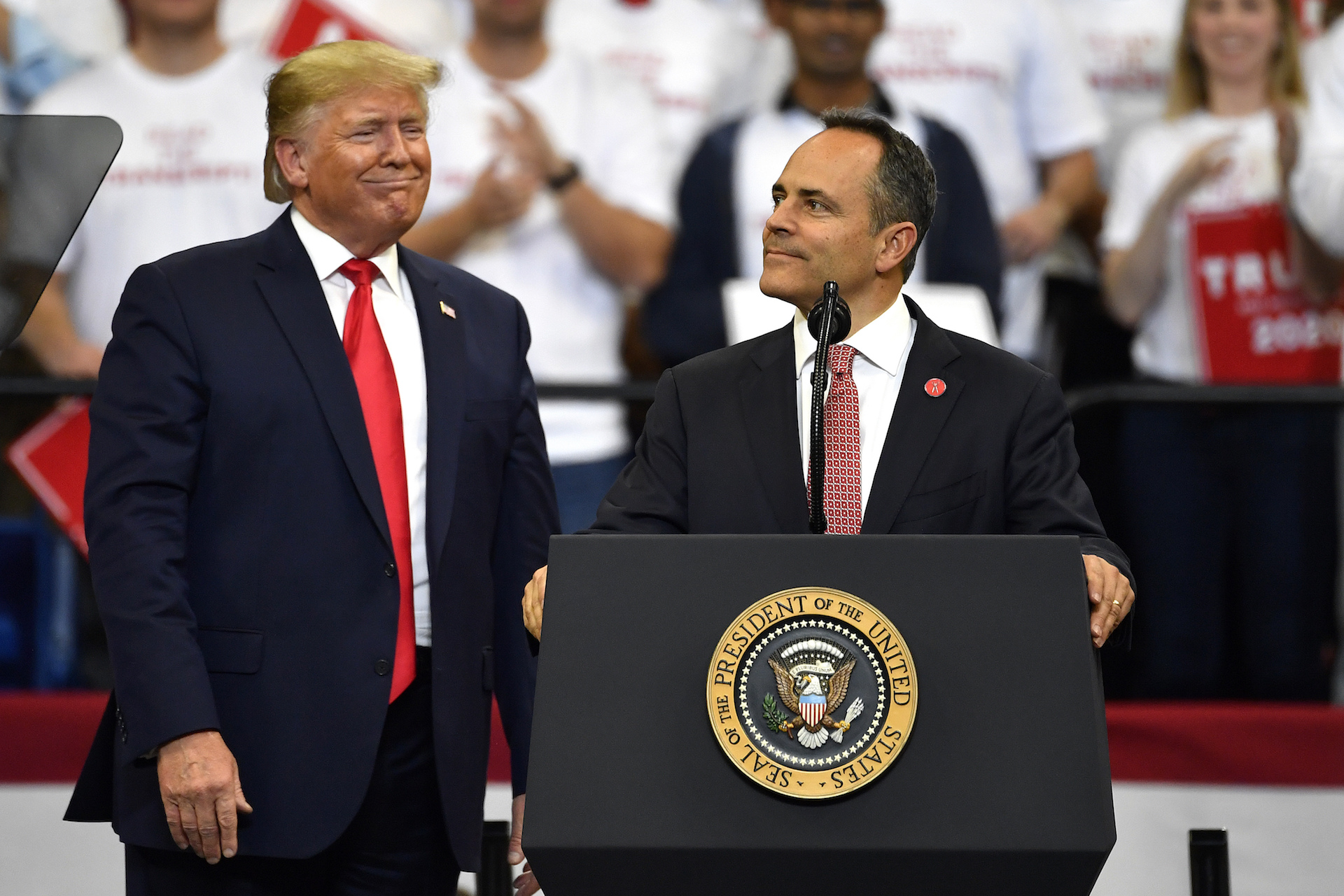 How You Can Support Your Aging Parent