A Hong Kong activist leader said he feared of another Tiananmen Square as hundreds of pro-democracy protesters desperately tried to escape a university besieged by police Monday, while outside their parents begged officers to let their children leave.

The standoff at the Hong Kong Polytechnic University (PolyU) followed pitched battles at the campus which began on Sunday, when police attempted to clear protesters who had been occupying the university for three days. Demonstrators lit a massive fire at the university’s entrance and lobbed petrol bombs to fend off police. Once policeman was was hospitalized after being shot in the leg with an arrow.

Police confirmed officers fired two live rounds during the confrontations, following warnings they would do so unless the protesters dropped their violent tactics.

The siege began on Sunday morning, and lasted throughout Sunday and into Monday. By Monday evening police were warning the 600 or so people inside, who they described as rioters, to surrender or face up to 10 years in jail for rioting.

But when some of those protesters attempted to escape, they were driven back by riot police firing tear gas.

“We are trying to escape”

The police said that the Red Cross was on the scene and those requiring hospitalization would be allowed to leave.

VICE News spoke to one protester who had been holed up on the campus since Sunday. “We are trying to escape from the campus,” said the man, who, like many on the frontlines, wished to remain anonymous.

In a public video message, another protester described the demonstrators’ sense of powerlessness.

“We have no water supply, no food supply, and we just learned that our energy supply will be cut off as well, and there’s no way out,” she said.

“The police are outside firing tear gas, rubber bullets and maybe live rounds towards us… We have only our face masks, goggles and umbrellas.”

Activist Joshua Wong, a leader of the Demosisto student movement, called on the international community to speak out to prevent the standoff from escalating into a “Tiananmen 2019.” The U.S. has condemned the “unjustified use of force” in the clashes and urged Beijing to protect Hong Kong’s freedom.

About 100 of the students trapped inside the university are high schoolers. Hundreds of parents of those pinned down inside gathered close to the campus for a peaceful sit-in to demand their children be released safely. Some burst into tears and knelt as they begged police to let their children leave the campus; others held signs saying “Save our Kids.”

While clashes raged at the campus, protests flared up elsewhere around the city in solidarity. More than 50 people were arrested for unlawful assembly in nearby Tsim Sha Tsui after they sat on the pavement with hands tied behind their backs in protest. Office workers protested in the city’s central financial districts during their lunch breaks, and police were once again forced to fire tear gas to disperse the demonstrators.

The government indicated in comments Monday that the escalating violence could lead to the cancellation of local assembly elections due to take place next Sunday, but critics say the government has completely mismanaged the protests since they began in June.

“It’s been going on for almost 6 months and the government has done nothing to resolve the biggest crisis in Hong Kong’s history. They even said there is anarchy, so what earth is the government doing about it?” Emily Lau, a former leader of the Democratic Party, told VICE News. “Most people, including those from the pro-Beijing camp, are exasperated at their incompetence and inaction.”

A campus under siege

Following last week’s pitched battle at the Chinese University in Hong Kong, many protesters moved to the centrally located campus of Polytechnic University in Hung Hom, on the southern end of the Kowloon Peninsula.

Protesters fortified the perimeter of the campus to prevent police from getting inside, but police moved in on Sunday morning to try and remove them. They were met with significant resistance as protesters set fire to the entrance and threw petrol bombs at riot police.

The battle continued throughout Sunday, before police ordered everyone to leave the school campus or risk “taking part in a riot” — an offense punishable by 10 years in prison.

However, when dozens of people did try and leave the school, including first responders, they were arrested. The police on Monday said officers arrested 51 people wearing “reporter” or “first aid” vests, citing intelligence that “some rioters would disguise themselves as fake reporters or first-aiders.”

By late Monday, many of the protesters had fled, but several hundred remained. Some of them attempted to escape but were forced back by police firing more tear gas.

The university campus is a key location in the ongoing battle between the government and the protesters. In recent weeks it has been an important base for protesters to launch operations in the surrounding neighborhoods, including blocking access to the Cross Harbor Tunnel, a key traffic artery in the city.

“They have to face the consequences of their acts”

The police remain in a standoff with the protesters on the campus of Polytechnic University on Monday evening and appear willing to wait it out.

“These rioters, they are also criminals. They have to face the consequences of their acts,” said Cheuk Hau-yip, the commander of Kowloon West district, where Polytechnic is located.

“Other than coming out to surrender, I don’t see, at the moment, there’s any viable option for them,” he added.

The police once again labeled the protester’s actions as “terrorist-like” during a press conference Monday. Speaking about the officer who was injured with an arrow during Sunday’s battle, a police spokesman said: “Without a doubt, this is a murderous act. The arrow could have killed our officer or anyone in the surroundings.”

Despite escalating violence, an embarrassing legal loss, lunchtime protests in the city’s financial hub and a crucial election in six days’ time, Carrie Lam has barely been seen.

Her one public act on Monday was to visit the policeman who was shot with an arrow during the campus protests, posting an update on her Facebook page about the visit.

However, her government will now face increased pressure to make a decision about the election on Sunday.

Pro-democracy groups are hoping to make significant gains, but the government could use the protests as an excuse to call off the vote.

“The situation in the past weekend has obviously reduced the chance of holding the elections as scheduled and I’m very worried and anxious about this,” Patrick Nip, the Secretary for Constitutional and Mainland Affairs, told local media outlet RTHK on Monday.

Nip added that ”postponing the election is a difficult decision to make and we will not take this step unless absolutely necessary.”

Canceling elections is likely to inflame an already explosive situation. When asked what she thought the chances are of the elections taking place, Lau said, “it’s touch and go, anything could happen.” 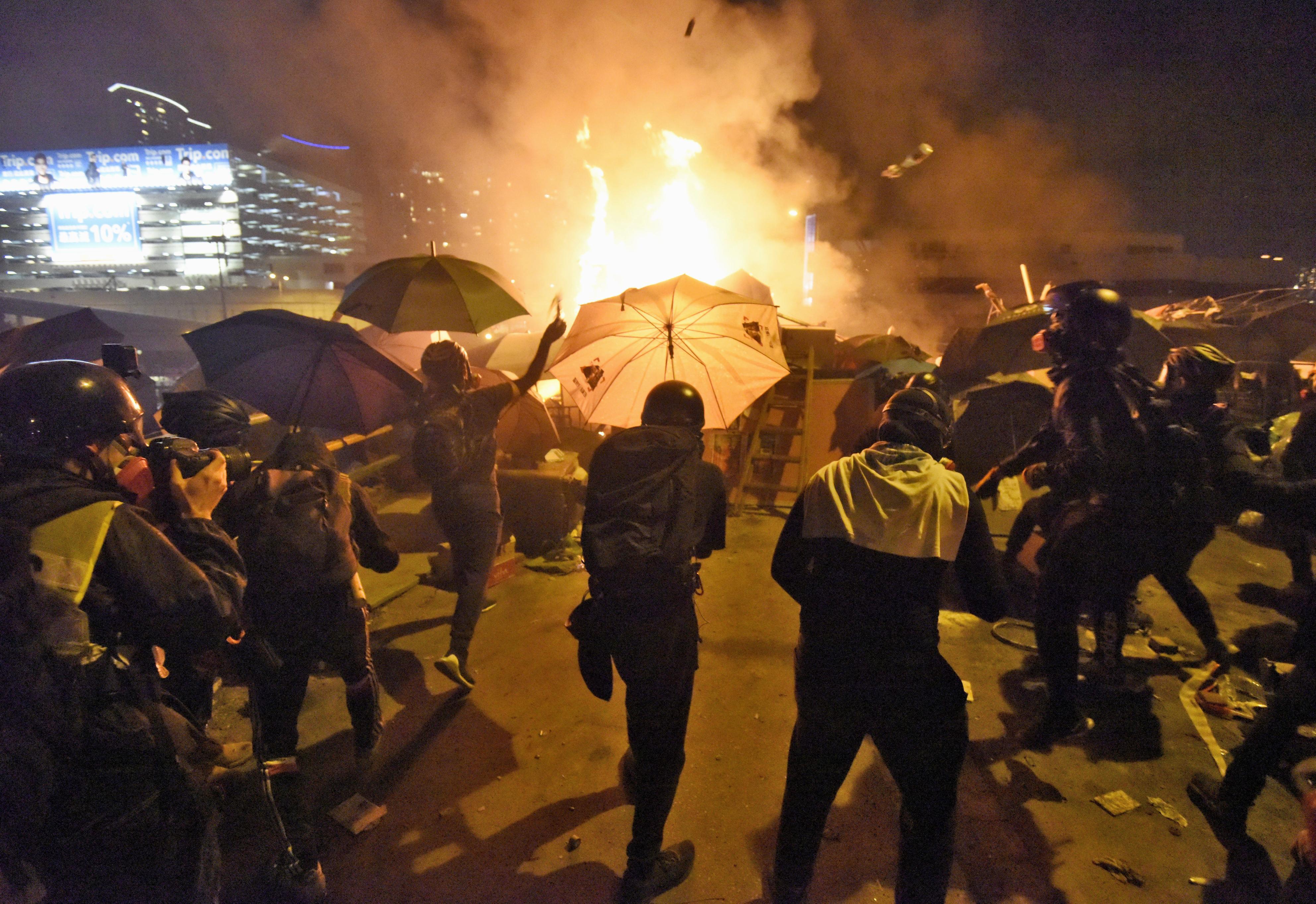