WASHINGTON — Democrats wanted a made-for-TV moment from Friday’s impeachment hearing. And President Trump, true to his reality television background, did all he could to assist.

Just as former Ukraine Ambassador Marie Yovanovitch was testifying about feeling threatened by the president’s smear campaign against her, Trump fired off a fresh insult on Twitter, attacking her track record as a diplomat and blaming her, evidently, for sparking conflict in hardship posts abroad.

Read: Trump Tried to Intimidate Marie Yovanovitch as She Testified About His Intimidation

In one tweet, Trump all but undercut the GOP’s strategy, which was to make Yovanovitch’s day on Capitol Hill so boring that the television audience would change the channel. His outburst was so off-message that even Fox News’ Bret Baier characterized it as “adding, essentially, an article of impeachment, real time” such that Republicans would have to “take the rest of this hearing to probably try to clean that up.”

And that was pretty much the size of things on Friday, the second day of live public testimony of Trump’s impeachment inquiry. Republican members of Congress and Trump’s own White House tried to keep things dull, as if backing up the message that nothing out of the ordinary had happened — while Trump fired off a schoolyard taunt at his own ambassador on Twitter.

Otherwise, Republicans vacillated between burying Yovanovitch in minutiae, and attempting to describe her experience under Trump as ultimately positive. Specifically, they tried to paint a happy ending for Yovanovitch, by portraying her as landing a cushy teaching gig at Georgetown University after she was recalled from Ukraine.

Earlier in the day, the White House tried their own hand at counter-programming by releasing a rough transcript of a previous call between Trump and Zelensky that was dull and lifeless. That release appeared intended to deflect from the other call between the two presidents — in which Trump slammed his own ambassador, Yovanovitch, as “bad news” and said ominously that she’s “going to go through some things.”

Democrats, meanwhile, struggled to find other newsworthy moments, but ultimately appeared to decide they couldn’t compete with Trump’s own bombast.

By the end of the day, they’d foisted up Trump’s tweet as an exhibit in the very hearing itself. Democrat Rep. Eric Swalwell slammed it as “disgusting.”

The audience in the chamber seemed to agree — and ended Yovanovitch’s hearing with a standing ovation for the career foreign service officer.

Cover: Former U.S. Ambassador to Ukraine Marie Yovanovitch is sworn in to testify to the House Intelligence Committee on Capitol Hill in Washington, Friday, Nov. 15, 2019, during the second public impeachment hearing of President Donald Trump’s efforts to tie U.S. aid for Ukraine to investigations of his political opponents. (AP Photo/Andrew Harnik) 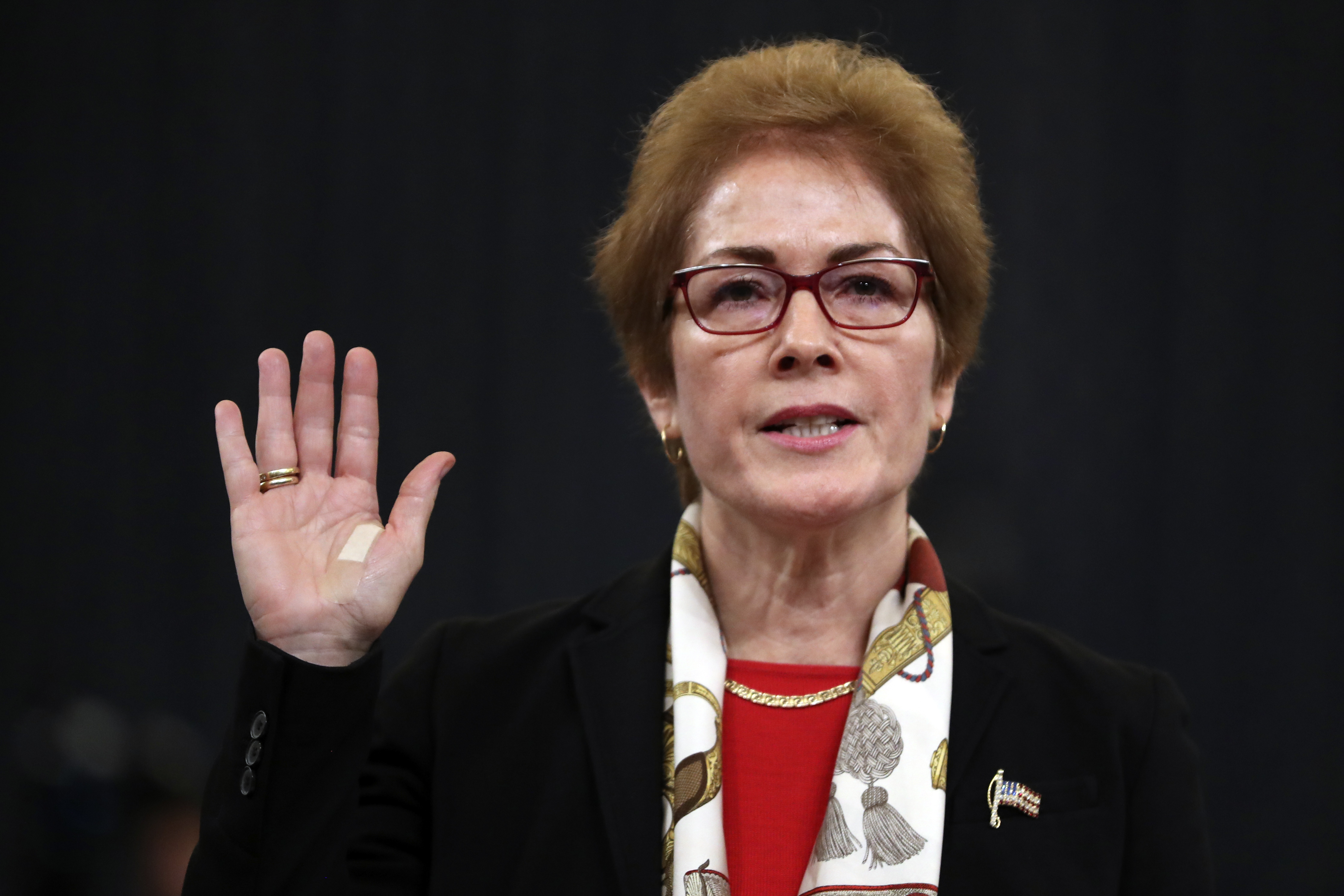