One McDonald’s employee was cleaning the bathroom when a man entered the room, exposed himself, and urinated on her. Another’s manager told her, after a customer exposed himself to her, that she should let the man “make love to you.” Then there was the dead body found inside a McDonald’s bathroom. One worker walked in to find blood everywhere.

These incidents and several more are detailed in a lawsuit filed Thursday by 17 Chicago-area McDonald’s cooks and cashiers, who accuse the fast food chain of failing to protect them from being “regularly exposed to violent and criminal behavior by customers.”

The workers’ lawsuit comes just days after a Michigan McDonald’s worker, backed by the Time’s Up Legal Defense Fund, sued the company over sex discrimination. Activists have spent the last year protesting allegations of sexual harassment at McDonald’s. They even participated in what is believed to be the first multistate strike against sexual harassment last year against the American icon, which is one the largest employers in the United States.

READ: A new sexual harassment lawsuit could be a huge blow to McDonald’s

In many of the lawsuit’s alleged instances, which took place at both corporate-owned stores and stores operated by franchisees, the workers say they let their managers know about the violence or that the manager witnessed it. But those managers allegedly failed to help. In one instance, a manager even started throwing items back at a customer who’d thrown them at workers. That manager allegedly told an employee that she could even throw hot oil from the fryer at a customer, if she wanted — but if the employee hurt a customer, she was on her own.

“McDonald’s never provided any safety training or offered any support for the trauma I’ve suffered,” Sonia Acuña, the McDonald’s worker who allegedly found the body in the bathroom, said in a statement. “We shouldn’t have to put ourselves in harm’s way just to support our families. That’s why we’re suing McDonald’s today — because it’s life or death for us.”

The workers in Thursday’s lawsuit are working with the Fight for $15, a labor rights group. They’re seeking unspecified damages but also want McDonald’s to change a number of practices that the lawsuit alleges leave workers in danger. For example, McDonald’s has allegedly torn down barriers that separate employees from customers to modernize their restaurants, a move that allegedly leaves the workers more vulnerable to attacks from customers.

“McDonald’s takes seriously its responsibility to provide and foster a safe working environment for our employees, and along with our franchisees, continue to make investments in training programs that uphold safe environments for customers and crew members,” the McDonald’s Corporation said in a statement. “In addition to training, McDonald’s maintains stringent policies against violence in our restaurants.”

Cover image: McDonald’s employees gather during a protest at City Hall in Chicago on Thursday, Nov. 21, 2019. A group of employees of 13 McDonald’s has filed a lawsuit alleging that the company’s drive for profits puts workers at risk of physical attack by dangerous customers. (AP Photo/Teresa Crawford) 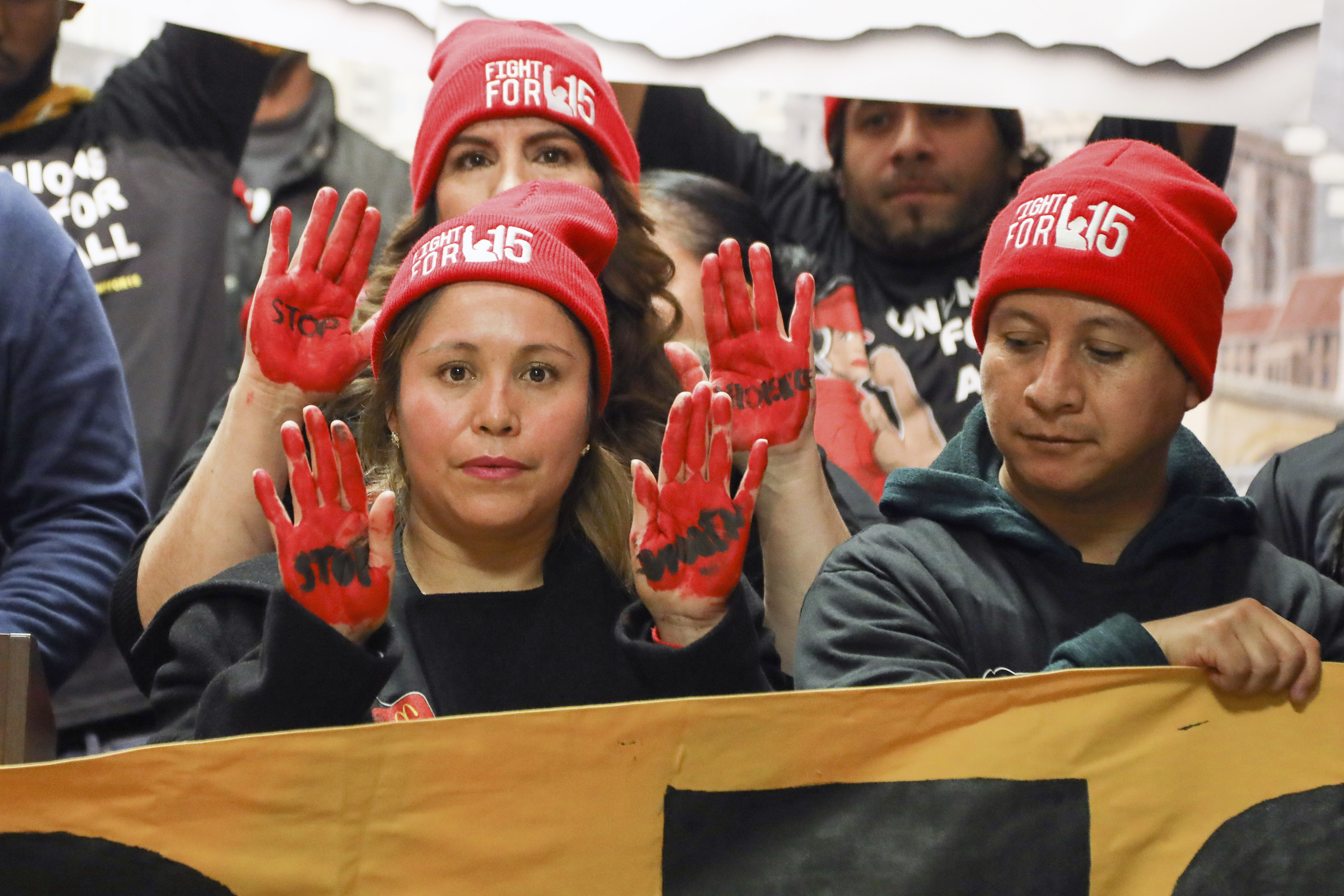