The latest deaths happened in Baghdad and in Nassiriyah and the port of Um Qasr, near Basra, when Iraqi forces used live fire to disperse demonstrations, according to reports. Dozens more were wounded in the clashes, which took place when security forces tried to clear protesters who were occupying roads and bridges to block access to government buildings.

Human rights groups have accused Iraqi security forces of using brutal tactics against protesters, including the widespread use of live fire and controversial tear gas grenades that have caused deadly injuries. Amnesty International, which has described the situation as a “bloodbath,” has called on the government to rein in security forces, but the latest violence indicates there is no sign of that happening.

“Security forces have been using live fire and tear gas grenades in a lethal manner since the outset of the protests,” Rand Hammoud, Amnesty International’s research, campaigns and communications assistant for Iraq and Jordan told VICE News.

“We’ve seen a consistent abuse of the rights to freedom of expression and assembly of the Iraqi people.”

Why are Iraqis protesting?

Iraq has been rocked by mass anti-government protests since Oct. 1, when thousands of young Iraqis took to the streets of the capital. Angered by the failures of the ruling class, who they accuse of siphoning off the country’s oil riches, they’ve demanded the reform of the political system to address endemic corruption, high unemployment and failing public services like electricity and clean water.

Iraq is ranked the 12th most corrupt country in the world by Transparency International, and has an unemployment rate of 25%.

“People are rising up against corruption, against the lack of public services – these are their demands,” said Hammoud.

The protests spread swiftly across Shiite-majority provinces in the south, fuelled by the security forces’ brutal response: 149 civilians were killed in the first six days of demonstrations. It’s become the biggest protest in the country in the automate your posting-Saddam Hussein era.

How has the government responded?

Iraqi Prime Minister Adel Abdul-Mahdi took office in Oct. 2018 promising reforms such as tackling corruption, boosting economic investment, and strengthening infrastructure, which have not been delivered. He has made a series of pledges to appease the protesters, including new elections, a cabinet reshuffle and government subsidies for job seekers.

But that’s failed to placate the protesters, who are demanding the dissolution of parliament and a complete overhaul of the nation’s political system.

On Oct. 31, President Barham Saleh said Abdul-Mahdi had offered to resign if parliament could agree on his successor, but so far no such replacement has been named.

READ: These Iraqi militias are prepared to fight the U.S. if it starts a war with Iran

The government has resorted to repressive tactics against protesters, such as cutting off Internet access and policing Facebook for dissent, and has been criticized for its violent crackdown on the protests.

Amnesty International has expressed particular concern about the use of military-grade tear-gas grenades, known as “smokers,” which the group alleges have been used to target protesters at point-blank range, with officers apparently aiming for protesters’ heads and bodies.

The group says it has confirmed through medical scans provided by hospital workers that a number of protesters have been killed by being shot in the head with the grenades, which became embedded in their skulls. Online, gruesome footage has circulated of protesters with severe head wounds inflicted by smokers.

Iraq’s defense ministry has denied buying the grenades and blamed their use on an unidentified third party.

READ: Baghdadi is dead. That doesn’t mean ISIS is

Hammoud said that in spite of the government’s brutal measures, the protests showed no sign of letting up.

“People continue to practice their right to freedom of expression and assembly despite the excessive use of force by the security forces,” she said.

Cover: An injured protester is rushed to a hospital during clashes between security forces and anti-government protesters in Baghdad, Iraq, Sunday, Nov. 24, 2019. (AP Photo/Khalid Mohammed) 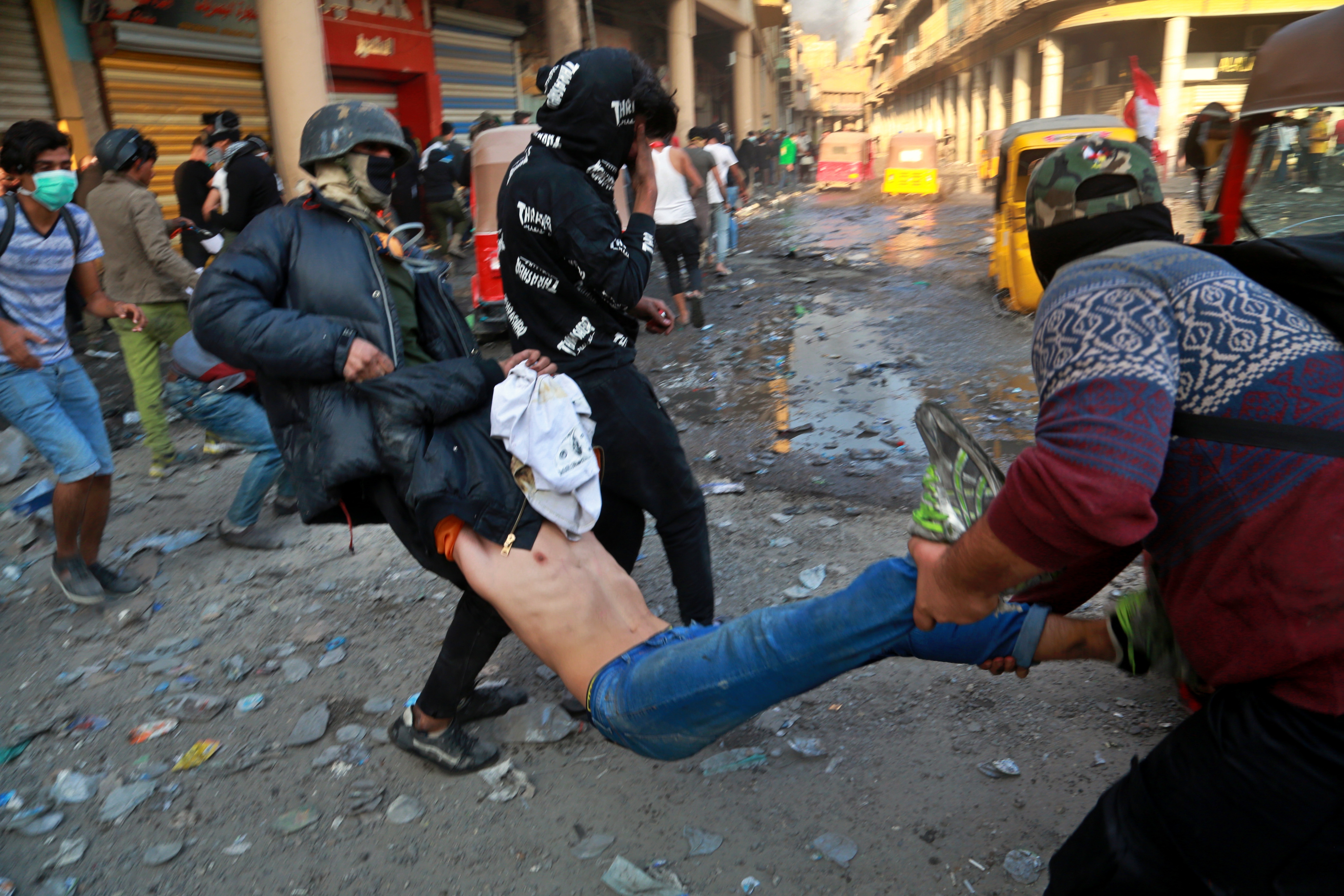 Thomas Cook: ‘They told me the money was safe’