The father of one of the victims of Friday’s London Bridge terrorist attack has accused the government of exploiting his son’s death for “vile propaganda,” as Prime Minister Boris Johnson promised a harsh crackdown on terrorists following the killings.

Though the government has faced calls not to politicize the attack out of respect for its victims, the sentencing and monitoring of convicted terrorists has become a hot-button campaign issue ahead of the UK’s elections next week, after it emerged the attacker, Usman Khan, was a convicted terrorist under “active investigation” by security services.

Khan was one of nine extremists convicted in 2012 over an al-Qaeda-inspired plot to bomb the London Stock Exchange and other targets. He was given a sentence that meant he would serve at least eight years and could not be released unless the Parole Board was convinced he was no longer a threat. But this sentence was successfully appealed, and Khan was released early on licence in December 2018 without appearing before the Parole Board. He was wearing an electronic monitoring tag during Friday’s attack.

Khan launched his attack Friday at a conference held by a prisoner rehabilitation program that had hailed him as a success story. He killed two people and injured three others before being wrestled to the ground by members of the public and shot dead by police.

The Conservatives and Labour, in campaign mode ahead of the Dec. 12 elections, have clashed over who bears greater responsibility for the attack.

On Sunday, Johnson blamed the previous Labour government for introducing the sentencing guidelines that led to Khan’s early release last year, and launched an urgent review of more than 70 convicted terrorists who had also been released early.

Jeremy Corbyn, leader of the opposition Labour party, rejected those allegations and blamed Conservative funding cuts to services such as community policing, probation, mental health, and social services. He said the cuts could “lead to missed chances to intervene in the lives of people who go on to commit inexcusable acts.”

Phillip Lee, the former Conservative justice minister who joined the Liberal Democrats this year, echoed the criticism of the government’s response, telling Sky News Monday that Johnson was drawing from “the Trump playbook” in calling for tougher sentences without having adequately invested in expanding prison capacity. “We never really had enough prison places in all the time I was a justice minister,” he said.

The two people killed by Khan were both involved in Learning Together, the University of Cambridge’s prison rehabilitation program which was holding its fifth-year anniversary event when Khan began his rampage. Jack Merritt, 25, was a course coordinator, and Saskia Jones, 23, was a volunteer for the program.

“Don’t use my son’s death, and his and his colleague’s photos — to promote your vile propaganda,” he wrote. “Jack stood against everything you stand for — hatred, division, ignorance.”

Although ISIS claimed responsibility for the attack, Britain’s security services believe Khan acted alone, according to reports. But they have begun their urgent review of released terrorists by looking at his accomplices from his previous terror plot, to assess whether they pose a greater threat than had been believed.

On Sunday, police said they had arrested one of them “on suspicion of preparation of terrorist acts,” saying the arrest had been made “in connection to a wider ongoing review of existing licence conditions of convicted terrorism offenders.” British media named the man as Nazam Hussein, who, along with Khan, was released early in December last year after their sentences were shortened on appeal.

Five of Khan’s accomplices in the 2010 plot have been released so far; one of them, Mohibur Rahman, was jailed again in August 2017 for plotting a “mass casualty attack” on security forces. He received a minimum 20-year sentence.

According to a Guardian report citing government sources, Khan was one of about 3,000 suspects under “active investigation” by British security services.

He is only the second suspect under active investigation by MI5 who has gone on to kill, the first being Khuram Butt, the ringleader of a 2017 terror attack on London Bridge.

Kacper Rekawek, an external associate fellow at the GLOBSEC security think tank, told VICE News that the ongoing threat posed by convicted terrorists after their release from prison was one of the major challenges facing European security services, with scores due for release in coming years.

A Globsec paper published in September studied the cases of more than 300 European jihadists implicated in terrorism during 2015, and found 199 had been convicted of terror offenses. Of that group, 45 will be released by the end of this year, and 113 will be out by the end of 2023.

He said cases like Khan — who had been held up as a model of successful rehabilitation — highlighted the risks posed by this group, some of whom would resist any attempts at deradicalization despite outward appearances.

“Maybe the takeaway is that some of these sentences are just too short,” he said. “It’s populist, but sometimes the return of good old-fashioned hard sentencing is all we have. We will never convince them to stop in some cases.”

Cover: Tributes are placed by the southern end of London Bridge in London, Monday, Dec. 2, 2019. London Bridge reopened to cars and pedestrians Monday, three days after a man previously convicted of terrorism offenses stabbed two people to death and injured three others before being shot dead by police. (AP Photo/Matt Dunham) 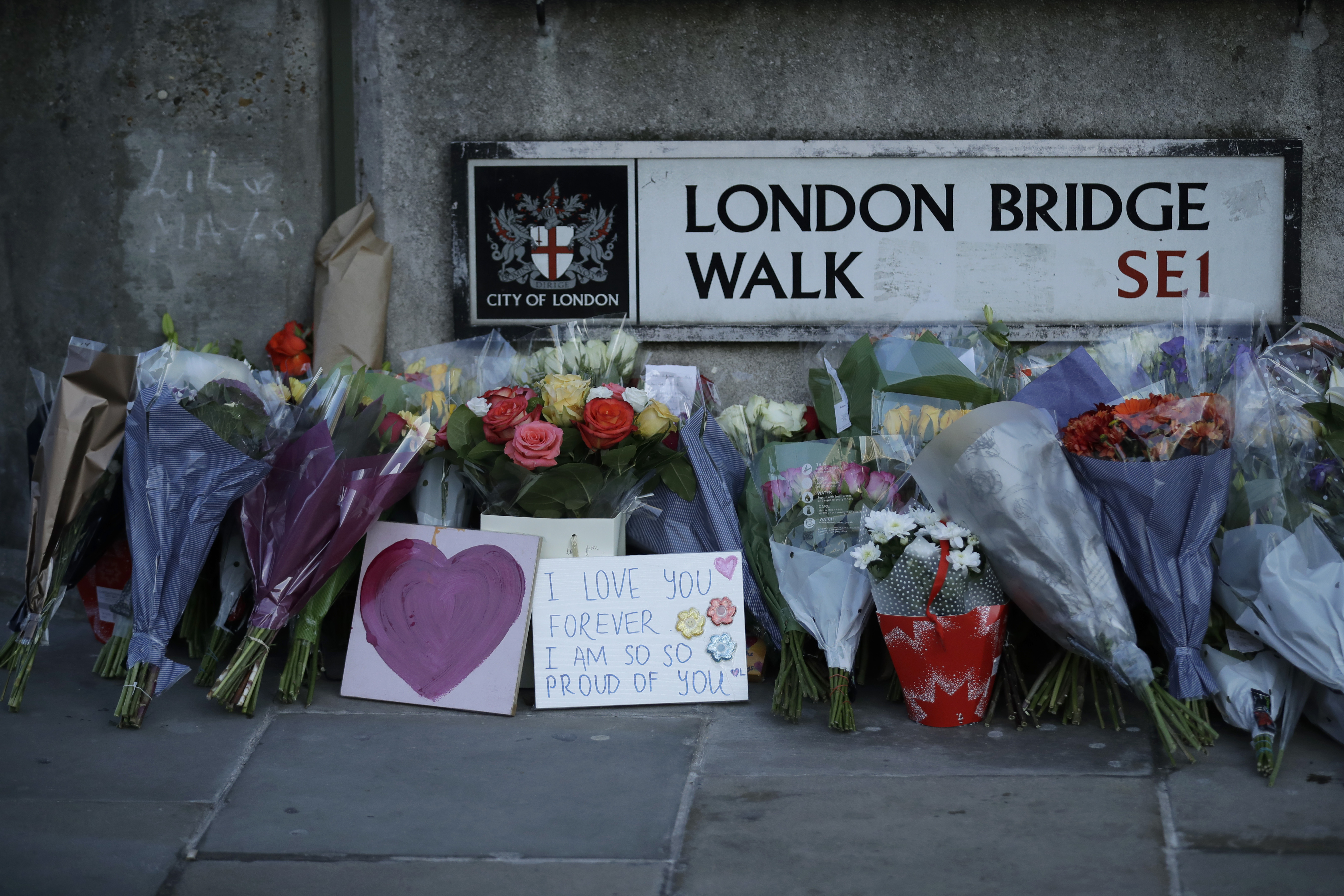