Hong Kong’s pro-democracy activists were initially welcoming to the burly young Ukrainians who arrived on the front lines of their protests Sunday.

Then they noticed the swastika tattoos.

In photos that swiftly circulated on social media, it was clear the visitors’ political allegiances were radically incompatible with Hong Kong’s pro-democracy movement. One of the men had two swastikas tattooed behind his ear, while another had the white power symbols “14 88” tattooed on his shoulders and the initials WPSH (white power, skin head or sieg heil) across his stomach.

As the photos spread, so did the questions. Who exactly were these Ukrainian fascists, and what the hell were they doing wandering around the protest front lines in Hong Kong?

“Nobody here knows who they are. Nobody invited them,” said Hong Kong Hermit, a prominent online activist who tweeted out a warning about the fascist “protest tourists” Monday (he doesn’t want to be identified by name because he regularly receives threats from hard-line Chinese nationalists over his activism.)

“Once people were informed they are neo-Nazis, my mentions have been full of Hong Kongers outright rejecting them,” he told VICE News.

The men, it turns out, are well-known figures in Ukraine’s far-right scene, former soldiers for the ultranationalist Azov Battalion who fought Russian-backed separatists in the east. While they say they’re just tourists, their presence in Hong Kong has sparked concerns that they may be there to glean lessons from this city’s protest movement to push their ideology back home.

The men’s backgrounds are in Azov, the ultranationalist military and political movement that’s notorious for its far-right ideology, including explicitly neo-Nazi views among its members. The leader of the group that visited Hong Kong, Serhii Filimonov, was until last year head of the Kyiv chapter of Azov’s political wing, National Corps, while two others accompanying him have given firearms training to National Corps activists, according to a Bellingcat investigation last year.

Since splitting from Azov about a year ago, they’re now affiliated with the hooligan-based street protest movement Honor.

The Ukrainian nationalist group, which styles itself as a civic activist movement, has organized street protest workshops, which it advertised with posters featuring Molotov cocktails. Filimonov, Honor’s leader, is currently facing charges for an alleged assault of a policeman, while its members have made posts encouraging violence against authorities, such as: “The only good cop is a dead cop.”

Filimonov told VICE News that while he supports Hong Kong’s protests, his group was just tourists. They had no plans to participate in the protests, he said, as they understood “this may hurt the protesters more than help them.”

But, he said, his group was “very interested in what is happening.”

“We participated in the revolution in Ukraine and we see many similarities,” he said. “It is interesting to see how they are organized.”

That interest has concerned far-right experts like Mollie Saltskog, an intelligence analyst at strategic consultancy firm The Soufan Group. She told VICE News the group’s presence in Hong Kong suggested they were likely seeking to learn lessons from the six-month anti-government protests to bring home to their own movement.

She said Ukraine’s far right had proven itself to be internationally minded, with groups like Azov actively courting connections with like-minded groups in other countries to network and share strategies. She said the group from Honor had also networked widely in Europe, and were likely in Hong Kong to try to learn successful techniques from the city’s protest movement firsthand.

“They’ll go wherever violence is and learn whatever tactics there are to learn to bring it back to their own fight,” she said.

READ: Far-right extremists have been using Ukraine’s war as a training ground

Saltskog said two of the group in particular were well-known figures on Ukraine’s far right with extensive social media followings.

Filimonov has more than 20,000 followers on Instagram, where posts featuring his family and Honor associates are interspersed with shots of him giving firearms instruction holding a rifle, wrestling with police officers, and engaging in violent street clashes.

Often featured on his feed is a fellow Honor member known as “Maliar,” another Azov veteran among the group in Hong Kong. Maliar — who has swastika tattoos on his head — was revealed in a 2018 Bellingcat investigation as having received military training in Poland from private military company the European Security Academy. Subsequently, along with another member of the group in Hong Kong, he gave firearms training to National Corps activists in 2017 and 2018.

Maliar is also a notorious figure in the football hooligan scene. In May 2015, he was photographed running on to the pitch of a Europa League semifinal in Kyiv brandishing a white supremacist Celtic cross banner. Five months later, he was reportedly involved in a racist attack on a black Chelsea fan at a Dynamo Kyiv match.

“We are not neo-Nazis, we do not hate minorities. We have neither the time nor the desire to hate people who have done us no harm,” he said, attempting to explain the neo-Nazi tattoos as nothing out of the ordinary.

“The majority of us were brought up in the football fan scene where such symbols aren’t unusual.”

He describes Honor — which uses a fascist-style logo of three upraised daggers, and whose name many members have tattooed on their bodies — as a “new youth civic movement that focuses on the problems of the capital” and whose guiding ideology is the “struggle for justice and Ukrainian independence.” Despite the violent imagery in its propaganda, he denied the group espoused violent tactics.

Analysts said such denials don’t square with the men’s clear track record of far-right ideology. Still, Filimonov’s spin reflects a strategic shift for the far-right group. Vyacheslav Likhachev, research analyst the ZMINA Center for Human Rights, told VICE News that the group had deep roots in the far-right hooligan scene but was attempting to shake its extremist public image and gain a measure of acceptance as a legitimate player in Ukraine’s civil society.

Matthew Schaaf, director of the Ukraine office of human rights watchdog Freedom House, told VICE News that the group has positioned itself as an anti-government street protest movement and a defender of civic activists. Its members had acted as security at mainstream civil society protests, apparently with the aim of “insinuating themselves into respected civil society in Ukraine.”

“They are clearly interested in building their brand,” he said.

If their trip to Hong Kong was also intended as one such PR exercise, it doesn’t appear to have worked. Hong Kong Hermit said that while Hong Kong protesters were sympathetic to Ukraine, seeing parallels between their struggle and the Euromaidan protests, they had spurned the “unwanted and uninvited parasites” once their extremist affiliations became known.

Filimonov, for his part, said the group had gained little from their trip that could help their movement.

“We have not met with anyone,” he said. “Frankly, we did not see anything new.”

Cover: Riot policemen try to disperse pro-democracy protesters on a street following a protests in Hong Kong, Sunday, Dec. 1, 2019. Thousands took to Hong Kong’s streets Sunday in a new wave of pro-democracy protests, but police fired tear gas after some demonstrators hurled bricks and smokes bombs, breaking a rare pause in violence that has persisted during the six-month-long movement. (AP Photo/Ng Han Guan) 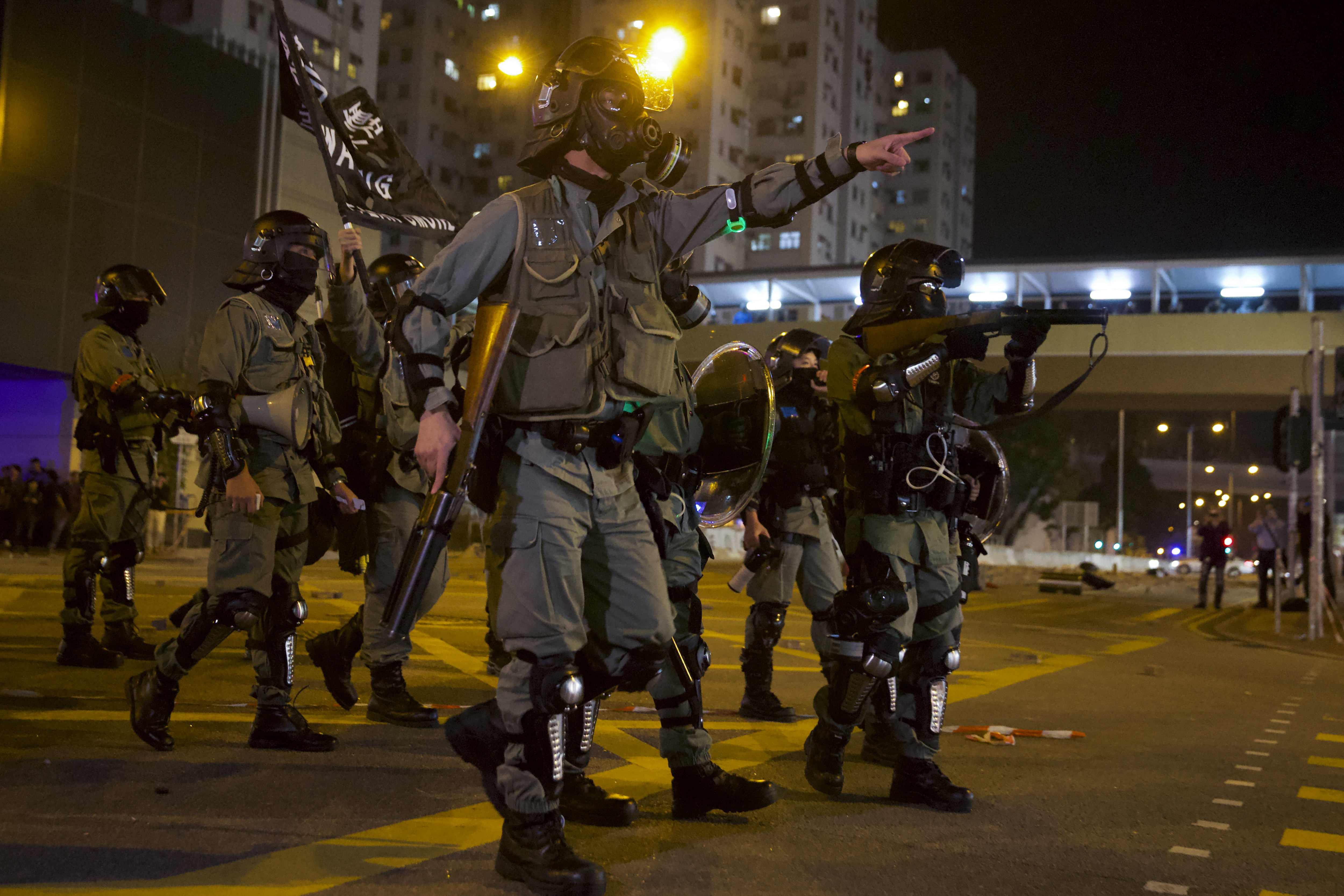