MEXICO CITY — Within a matter of two months, the Jalisco New Generation Cartel brazenly killed 13 Mexican police officers; the Sinaloa cartel took an entire city hostage after the arrest of one of its leaders; and nine U.S.-citizen women and children were massacred in northern Mexico.

The idea of designating Mexican cartels as terrorist organizations may not sound crazy — after all, the cartels do inflict terror — but the idea has sent reverberations of fear among Mexican officials. Not only do they see it as a threat to the country’s sovereignty — one that could lead to military intervention by the U.S — it doesn’t solve the biggest problem from the Mexican perspective: stopping the flow of U.S. weapons over the border into Mexico.

Political analysts also warned that such a designation could backfire for Trump. Among other things, it could undermine his immigration policies aimed at clamping down on asylum seekers, give prosecutors broad leeway to go after U.S. businesses and citizens perceived as supporting the cartels, and permanently damage U.S.-Mexico relations.

“It raises all these concerns about sovereignty and all these historic fears going back to the war of 1847 where the U.S. annexed large portions of Mexico,” said Earl Anthony Wayne, U.S. Ambassador to Mexico from 2011 to 2015. “It’s rooted in the Mexican collective psyche.”

READ: El Chapo’s son was just captured — and freed after the cartel attacked

On Thursday, Attorney General William Barr met with Mexican President Andrés Manuel López Obrador and other top officials in Mexico City to discuss ways to combat cartel violence and presumably for Mexico to make its case against the terrorist designation. The Justice Department said the two sides discussed “the importance of targeting illicit financial networks and disrupting the illicit movement of cash, weapons, and drugs.”

Barr was scheduled to brief Trump Friday on the trip and advise on “next steps.”

Complicating matters is that Trump and López Obrador have diametrically opposite views on how to address the soaring violence in Mexico, which is on pace for its deadliest year on record.

López Obrador took office on a slogan of “hugs, not bullets” and promised to end his predecessors ill-fated war on drugs. He maintains that if the U.S. really wants to help it would do more to stop gun trafficking from the U.S into Mexico. Seventy percent of guns confiscated in Mexico are from the U.S., according to Mexico’s defense minister.

Trump, on the other hand, called on Mexico to “WAGE war on the cartels and wipe them off the face of the earth,” shortly after the killing of nine American Mormon women and children. A few weeks later, in an interview with former Fox News host Bill O’Reilly, Trump first publicly raised the prospect of designating cartels as terrorist organizations and said his administration is “well into that process.” He complained that López Obrador has refused offers of military help. “But at some point, something has to be done,” Trump said.

But a terrorist designation may come at the cost of his other priorities.

Perhaps most importantly to Trump, it could sabotage his policy of sending asylum seekers to Mexico to wait out their cases — one of the most effective immigration deterrents he has pushed through.

The Trump administration insists that the more than 60,000 migrants returned to Mexico are safe, despite sending them to violent Mexican border cities where cartels operate with impunity. Labeling the cartels as terrorist groups could bolster legal challenges to the policy by immigrant-rights groups.

“The administration has to prove that migrants are being kept in a country where there isn’t a threat and they are safe,” said Duncan Wood, director of the Mexico Institute at the Wilson Center in Washington, D.C. “If you designate these groups as terrorist organizations, then somebody will be able to say that there is a terrorist threat in this part of Mexico. It opens him up to court challenges.”

Wayne, the former U.S. Ambassador to Mexico, said the Department of State, Department of Defense, and Homeland Security have long opposed such a designation. In addition to damaging U.S.-Mexico relations, he said there is a fear that it could frustrate other anti-terrorism efforts. Terrorist groups are generally defined as being politically-motivated. Cartels, on the other hand, are profit-driven criminal organizations.

Blurring that line, Wayne said, “could result in undermining the broad international consensus that has allowed such good cooperation in fighting terrorist groups.”

Also, once a group has been named a terrorist organization, it’s illegal for people in the U.S. to knowingly give it money or support. That raises the specter that thousands of people in the U.S. could be labeled as supporters of terrorism — everyone from gun sellers whose arms make it into the hands of Mexican cartels, U.S. businesses that benefit from cartel money, and drug users themselves.

“There are all sorts of implications,” Wayne said. “How do drugs get to Atlanta? And once they get there, what happens to them? Someone distributes them, sells them, buys them. A lot of those people are American citizens. So what do you do with them?”

But it’s not just drug dealers. U.S. institutions that keep the cartels running could find themselves ensnared.

“My guess is that quietly there are groups in the U.S. — not the least of which are businesses, banks and service providers that are uneasy with it,” said Antonio Garza, the U.S. ambassador to Mexico from 2002-2009. “This terrorist designation opens up a range of prosecutorial tools that could just as easily be aimed at businesses in the U.S. as directed at the cartels.”

Still, the latest shoot-out in Mexico, just days after Trump’s threat, couldn’t have come at a worse time for Mexico.

Members of the Cartel del Noreste — an offshoot of the Zeta Cartel — reportedly drove in armored vehicles to the city hall in Villa Union and began firing. The state prosecutor said the cartel was seeking to assert control over the territory and establish it as a drug trafficking route to the U.S. Villa Union is about an hour’s drive from Eagle Pass, Tx.

López Obrador called the shoot-out, which killed 23 people, an “exceptional act” of violence. But coming on the heels of a series of high-profile shoot-outs — including an hours-long gun battle in the city of Culiacan after the bizarre capture and then release of the son of former cartel leader Joaquín “El Chapo” Guzmán — it deepened concerns that such incidents will become commonplace.

Jorge Castañeda, Mexico’s foreign minister from 2000 to 2003, said López Obrador has been wishy-washy, and that’s hampered his efforts to stem the violence.

Cover: Forensic experts and investigators of the prosecution office work at the crime scene next to a man’s corpse in Ciudad Juarez, Mexico, on April 20, 2019. (Photo: HERIKA MARTINEZ/AFP via Getty Images) 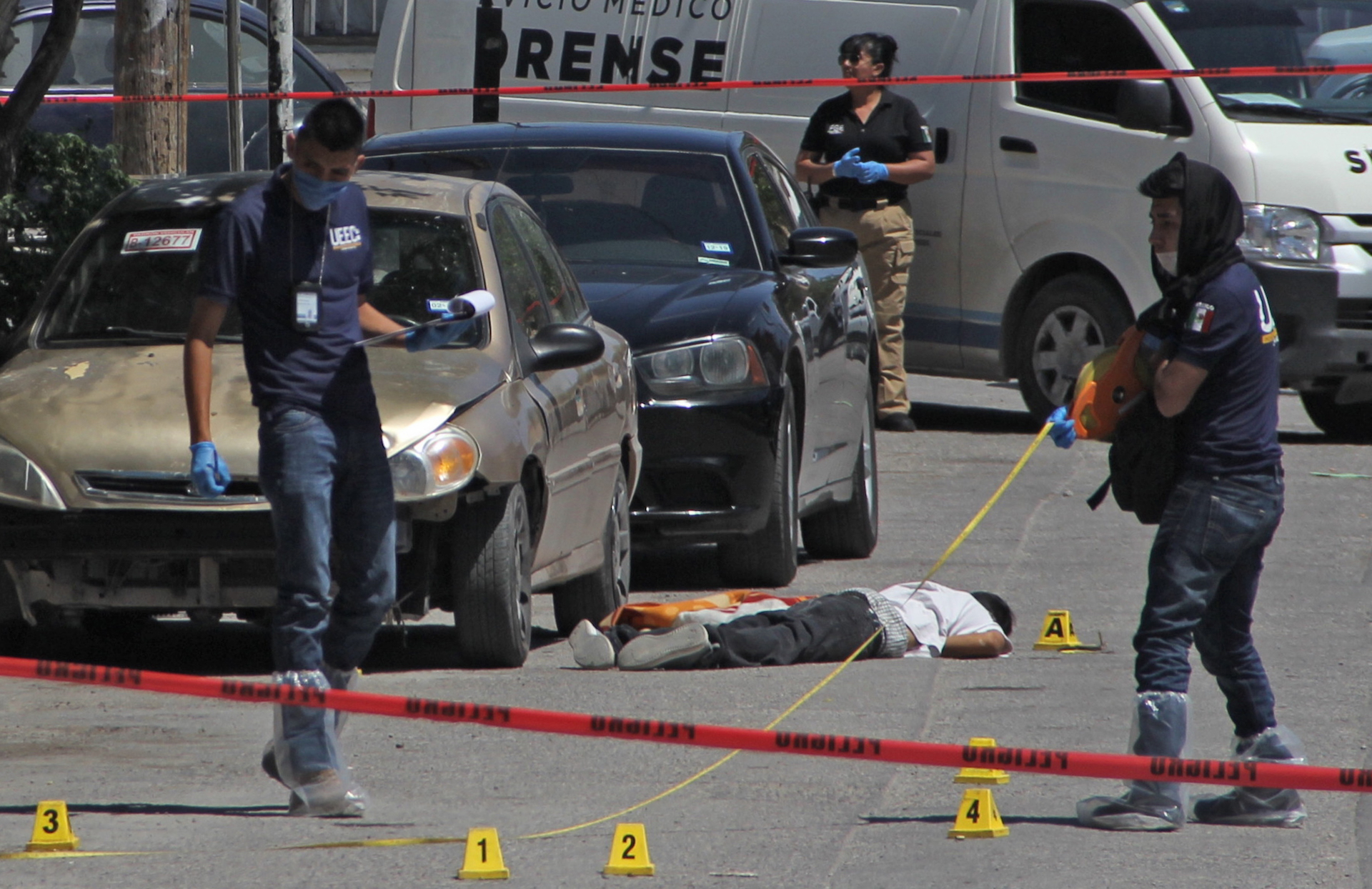