When Bernie Sanders was asked what message it sends to Democratic voters that Andrew Yang was the only person of color on the debate stage Thursday, the Vermont senator brought up an issue that’s received little to no airtime at previous debates.

“I will answer that question, but I wanted to go back to the issue of climate change for a moment because I do believe this is the existential issue,” he said. “People of color are going to be the people suffering most if we do not deal with climate change.”

Climate change has already gotten more air time during the Democratic primary campaign than it’s gotten in any other presidential campaign. But given that it’s one of the top priorities for Democratic voters, moderators have asked relatively few questions on the topic at the televised debates. But Thursday night, the candidates were afforded more time — about 13 minutes — to elaborate on their changing climate platforms than they’ve gotten at any other debate.

For his part, Andrew Yang elaborated on his plan to move people to higher ground as seas rise.

Warren, channelling the central message of her campaign, said no meaningful action on climate would happen unless corruption in Washington is dealt with.

Klobuchar said she’s the best candidate to tackle climate change cause she’s from the Midwest, for some reason. (“It’s not flyover country to me,” she said in response to a question about climate change. “I live there.”)

The candidate who spent the most time on the topic, at a full 2 minutes and 22 seconds, according to the New York Times was Billionaire Tom Steyer, a late entry into the 2020 race who, for years, has advocated for more aggressive action on climate change.

“Our biggest crisis is our biggest opportunity,” Steyer said, noting that addressing climate change could create millions of union jobs. “This is a generational question.”

At the last debate, there was a single question on climate change (which was asked to Rep. Tulsi Gabbard, the only candidate on the debate stage who hadn’t put out a comprehensive climate change plan and who was not at the sixth debate). The lack of focus on climate has had activists clamoring for a full debate focused on the climate crisis, but the Democratic National Committee has refused to allow one.

All of the leading candidates support reentering the Paris Climate Agreement which President Donald Trump has pulling the U.S. out of, and committing to massive technological and infrastructural investments. They also know new well-paid jobs need to be created in the transition to a green economy. (The morning after the debate, Elizabeth Warren put out a big plan to create more than 10 million jobs while greening the economy.)

But until Thursday’s debate, candidates hadn’t had much of an opportunity to hash out their differences on climate change head-to-head. And though all of the Democratic candidates believe in the fact that climate change is real, and a threat, they’re not completely in agreement on how to deal with it.

The moderators went down the line of a candidates and asked several of them whether they thought a new federal program should be created specifically to relocate people. Some, like Andrew Yang, think that would make sense; others, like Bernie Sanders and Amy Klobuchar, don’t think mass relocation is a federal priority. (People are already being displaced by climate change.)

The candidates also don’t agree entirely on the role that nuclear power will play in a transition away from fossil fuels. Warren said she’d keep existing nuclear plants open for now but wouldn’t build new nuclear power. “I want to put the energy, literally, and the money and the resources behind clean energy,” Warren said.

Yang disagreed. “If we’re going to innovate our way out of this, we have to have nuclear at the table,” he said.

But despite their differences, there’s one point they all agreed on. It’s time to act.

“I’ve seen politicians in Washington say the right things about climate change for as long as I’ve been alive,” said South Bend Mayor Pete Buttigieg, who, at 37, is the youngest candidate in the race.. “Their impact is multiplied by zero if nothing gets done.”

Klobuchar even turned the heated and length discussion about Buttigieg’s courtship of billionaires’ money in a Napa “wine cave” into a commentary on the environment.

“I have never even been to a wine cave,” Klobuchar said. “I’ve been to the Wind Cave in South Dakota, which I suggest you go to.”

Turns out, the Wind Cave, a national park in the midwestern prairie, is threatened by climate change. 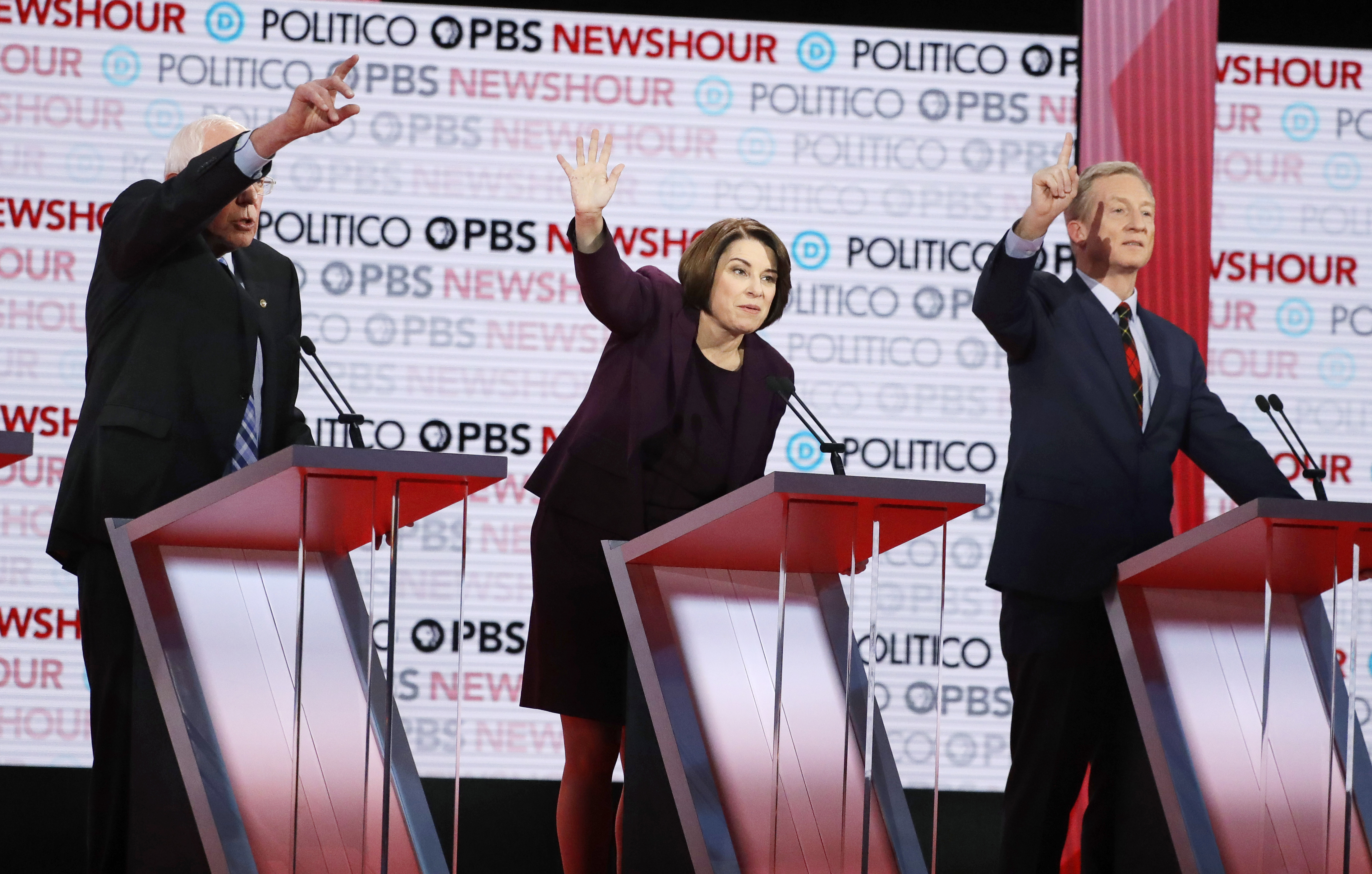