A deadly typhoon in the Philippines killed more than a dozen people and forced countless others to flee their homes over the Christmas holiday.

Reported death tolls varied on Thursday: The AP reported at least 20, while CNN put the figure at 16. Authorities said the deaths were primarily from drowning, falling trees, and accidental electrocution, the AP reported. 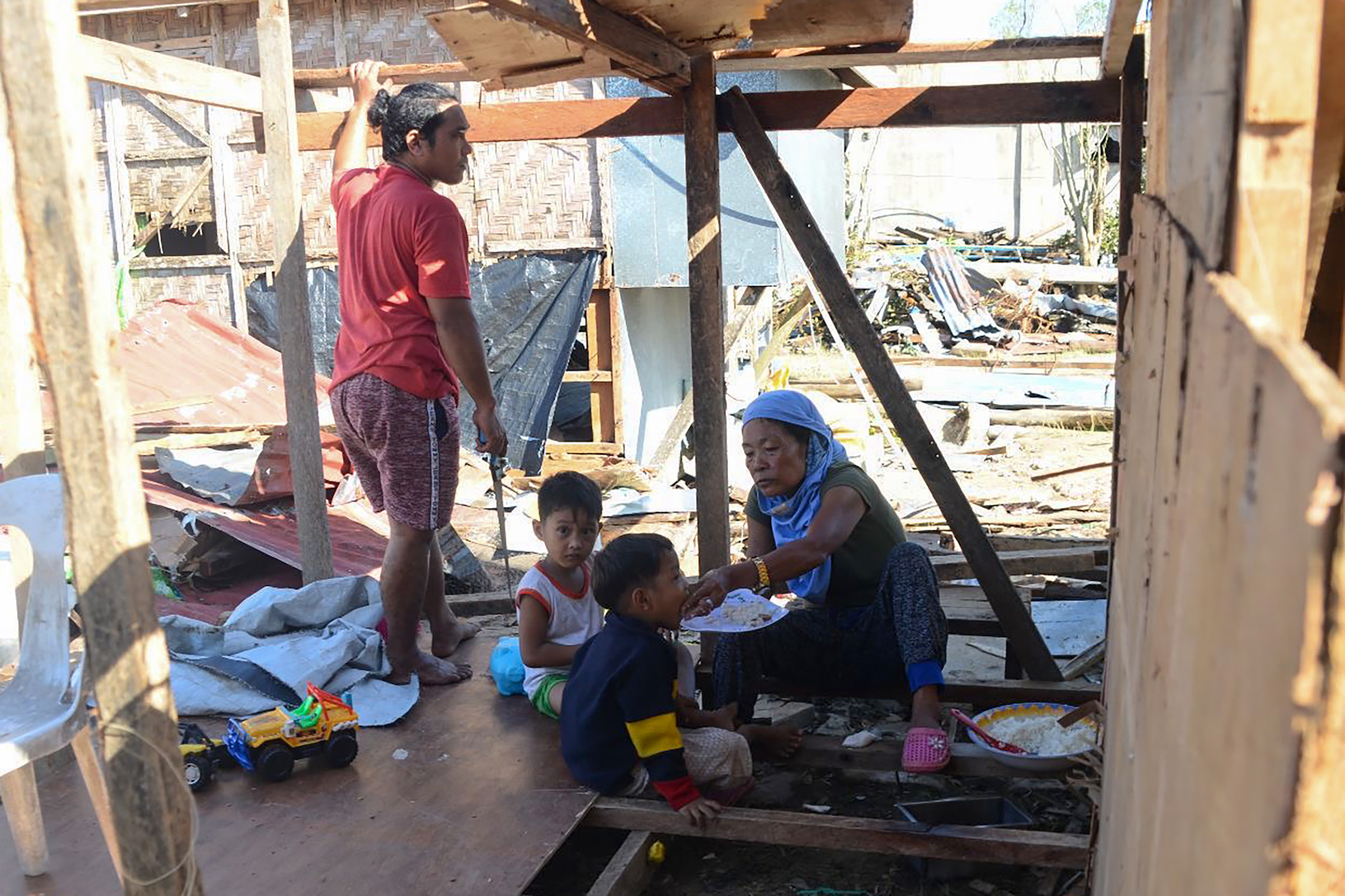 A family eat a meal inside their house damaged at the height of Typhoon Phanfone in Guiuan town in Eastern Samar province on December 26, 2019. (Photo: ALREN BERONIO/AFP via Getty Images)

The storm, known as Typhoon Ursula in the Philippines, made landfall on Tuesday and battered the Philippines ― a largely Catholic country ― through the entire Christmas holiday. It peaked with sustained winds of some 90 miles-per-hour with gusts up to around 120 mph. By Thursday it had weakened slightly as it moved toward the South China Sea.

Some 60,000 people had to be evacuated as the typhoon approached, and thousands more were stranded over the holiday as travel became impossible, the New York Times reported. About 25,000 people were stranded at sea ports after ferries were canceled, and nearly 16,000 were stuck in airports. 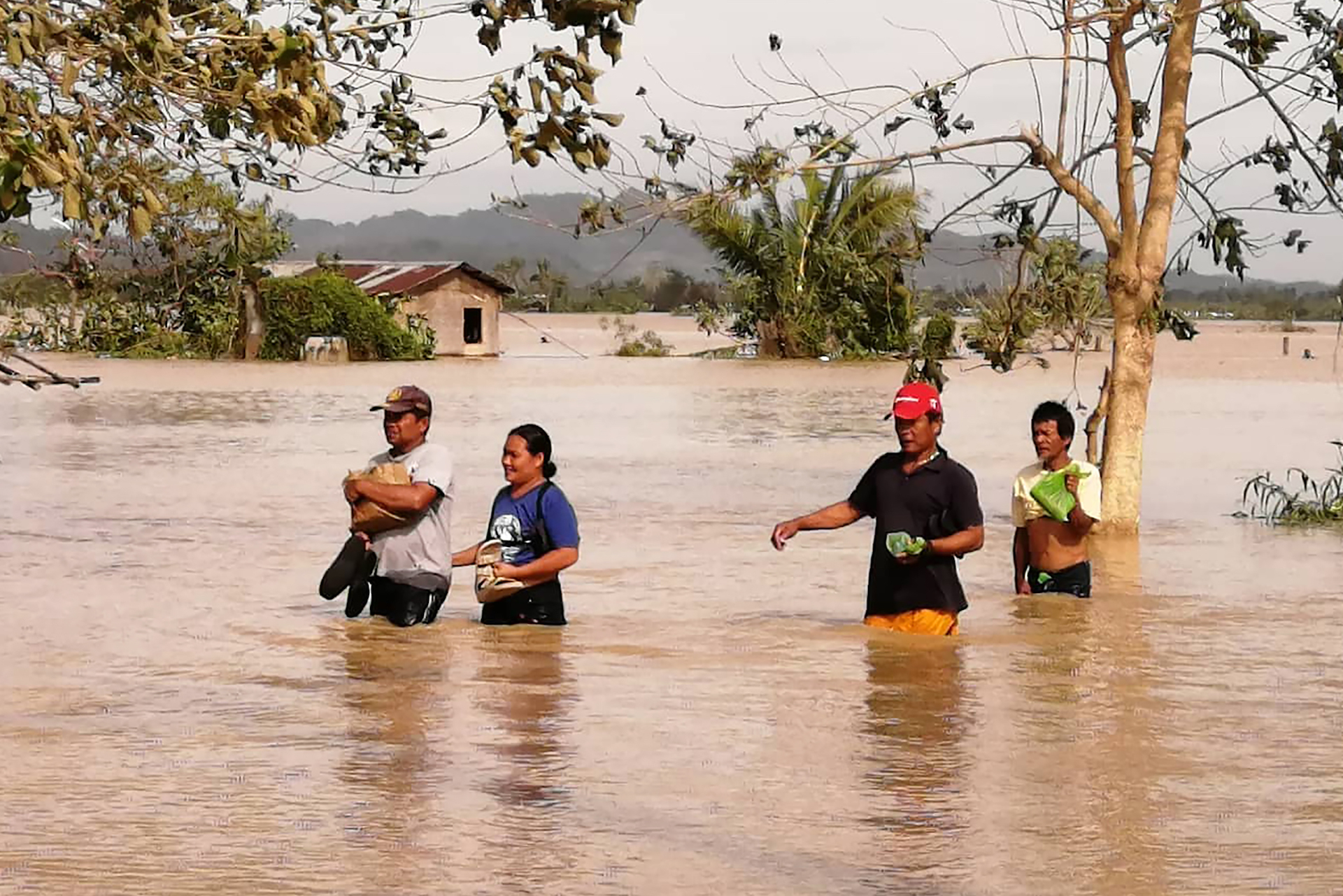 Residents wade through a flooded highway, caused by heavy rains due to typhoon Phanfone, in Ormoc City, Leyte province in central Philippines on December 25, 2019. Typhoon Phanfone pummelled the central Philippines on December 25, bringing a wet, miserable and terrifying holiday season to millions in the mainly Catholic nation.

READ: Here’s a heartbreaking look at what Dorian did to the Bahamas

After the storm hit, towns were pummeled by landslides, flooding, and strong winds as widespread power blackouts complicated recovery and rescue efforts.

“You can’t see anybody because there was a total blackout, you can’t hear anything. The town looked like a ghost town,” Cindy Ferrer, of the regional Office of the Civil Defense, told the AP about a coastal town called Batad. 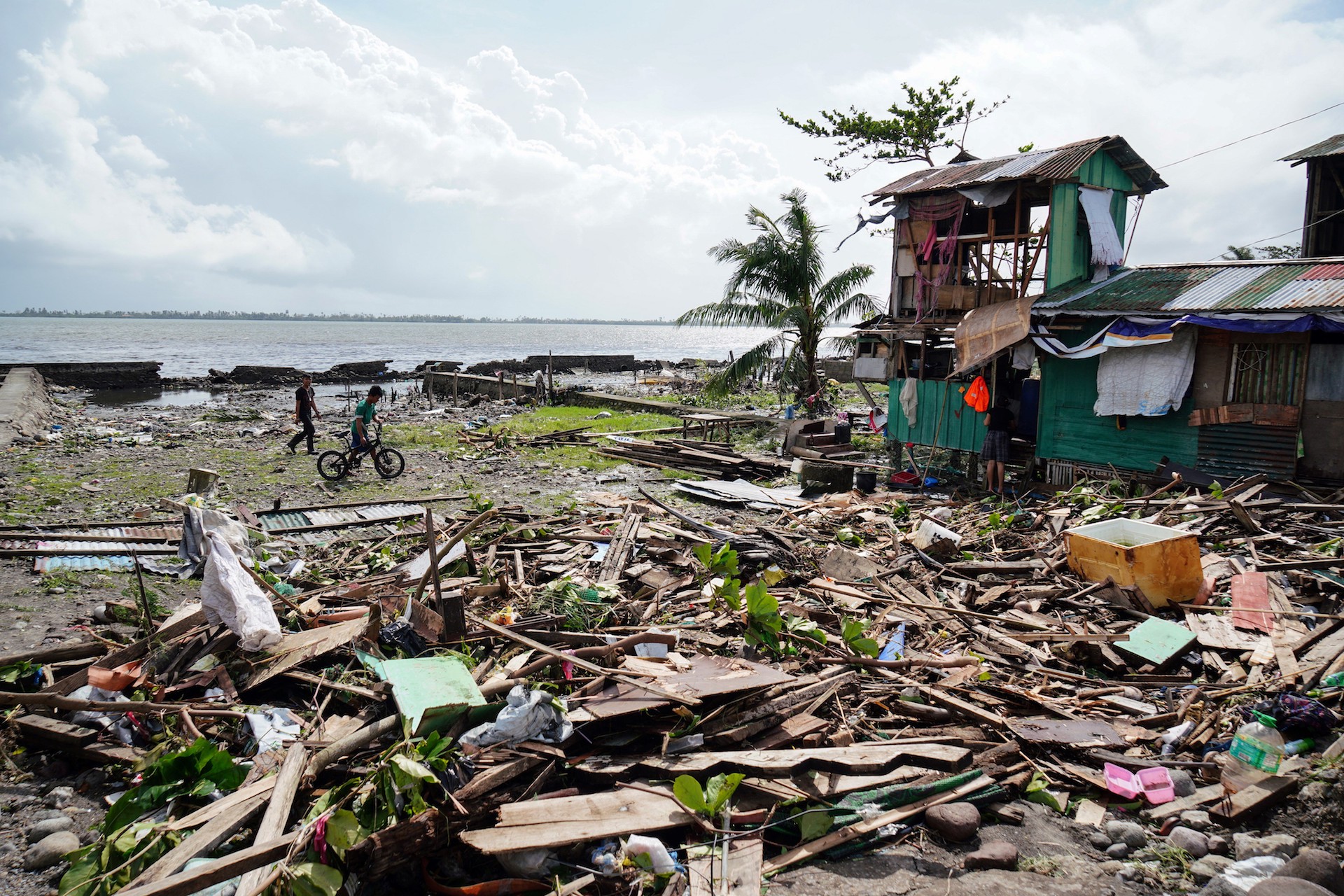 Residents walk past a house damaged during Typhoon Phanfone in Tacloban, Leyte province in the central Philippines on December 25, 2019. (Photo by BOBBIE ALOTA/AFP via Getty Images)

MORE: These storm tourists are dropping thousands of dollars to chase tornadoes

Photos of the aftermath of the typhoon showed crumpled houses, massive floods, and survivors struggling to wade to safety. Emergency services were working Thursday to provide food even as many roads were impassable.

The Philippines has been hit by about 20 typhoons this year, with Ursula proving to be one of the most damaging. It followed a similar path to 2013’s Typhoon Haiyan, which killed more than 6,000 people. 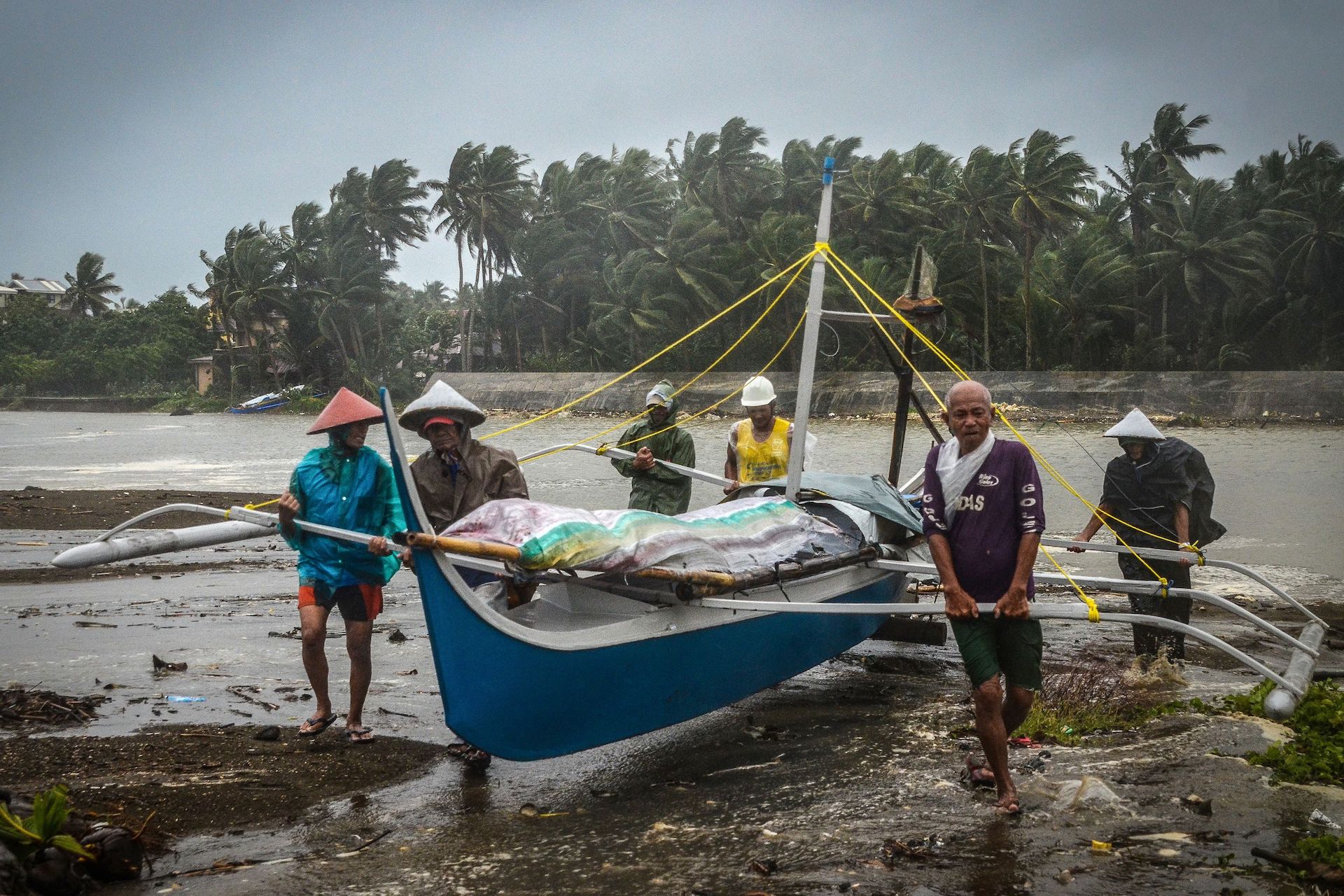 Cover: Motorists wade through a flooded highway, caused by heavy rains due to typhoon Phanfone, in Ormoc City, Leyte province in central Philippines on December 25, 2019. (Photo by RONALD FRANK DEJON/AFP via Getty Images) 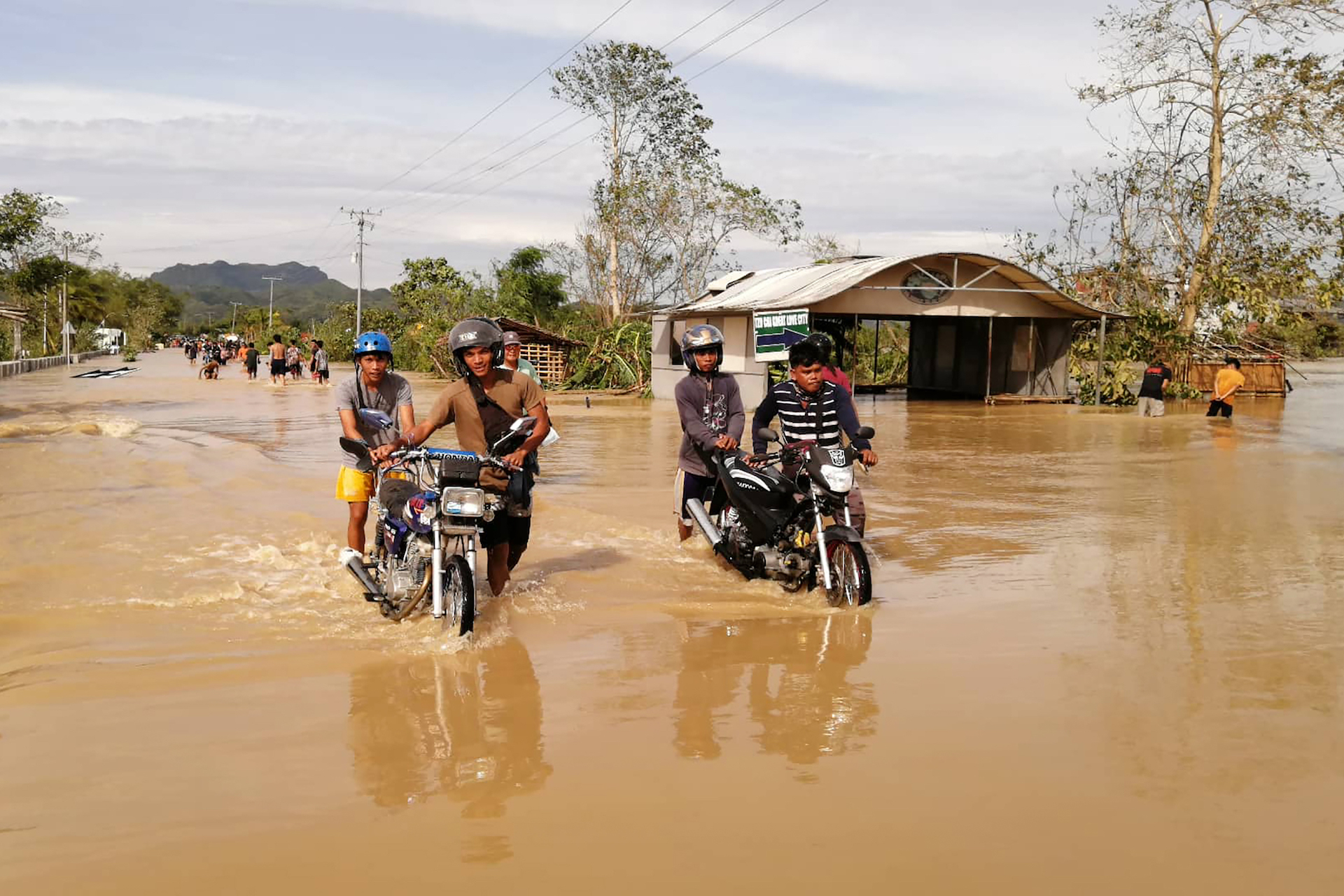 5 Must-Have Items in a Luxurious Bedroom