Thousands of people along the southeast coast of Australia were forced to flee to the water’s edge under blood-red skies on Tuesday as wildfires tore through the region.

The country planned to send military aircraft and vessels to the states of New South Wales (NSW) and Victoria on Tuesday to help recovery efforts, the BBC reported. At least two more people were killed in NSW, raising the fire season death toll to 12, according to the BBC.

Beautiful beach towns were turned to smoky hellscapes as Australia prepared to ring-in the New Year. In the popular camping town of Mallacoota at least 4,000 people rushed to the shore to seek safety from fires. The fires have grown so dangerous that now people are sheltering on boats in the water or finding refuge in the water itself.

“There’s no way in or out,” Mallacoota resident Jason Selmes told CNN after fleeing his home.

People took similar actions In other coastal towns. In Batemans Bay, about 250 miles south of Sydney, residents sat on folding chairs on the shoreline, with life-rafts nearby for a speedy escape.

“We’ve got literally hundreds, thousands of people up and down the coast, taking refuge on the beaches,” said Shane Fitzsimmons, commissioner of the NSW Rural Fire Service, according to the BBC.

Photos and videos of the fire-ravaged areas showed the midday sun totally blocked by sun, a red hue taking over the sky. The fires are so large they’re generating their own weather. The storms are forming “pyro-cumulonimbus clouds” — basically localized storm clouds formed by rapidly rising hot air — that are, in turn, spreading more fire through lightning and wind that carries embers.

Military vessels are preparing to evacuate residents from the water, while thousands more people are packed into evacuation centers. Tens of thousands are without power, the New York Times reported.

READ: A ‘heat dome’ is about to make Australia’s summer from hell even hotter

Monday and Tuesday marked just the latest awful days in a long summer of fires for Australia, where high temperatures, sustained droughts and strong winds have fed blazes for weeks. And there are still several months to go until summer ends.

Robert Salway, 63, and his son Patrick, 29, died trying to defend their property in the town of Cobargo along the country’s southeastern coast on Tuesday. A 28-year-old volunteer firefighter named Samuel McPaul died on Monday when his truck flipped during a “fire tornado” near the border of NSW and Victoria.

Fitzsimmons called the summer “the worst fire season we have experienced here in NSW.”

In all, at least 900 homes have been destroyed and millions of acres have been scorched. Roughly 500 million animals have been killed. And there’s no end in sight for the fires that have almost assuredly been made far worse by climate change.

Cover: In this image dated Dec. 30, 2019, and provided by NSW Rural Fire Service via their twitter account, firefighters are seen as they try to protect homes around Charmhaven, New South Wales. Wildfires burning across Australia’s two most-populous states Tuesday trapped residents of a seaside town in apocalyptic conditions, destroyed many properties and caused fatalities. (Twitter@NSWRFS via AP) 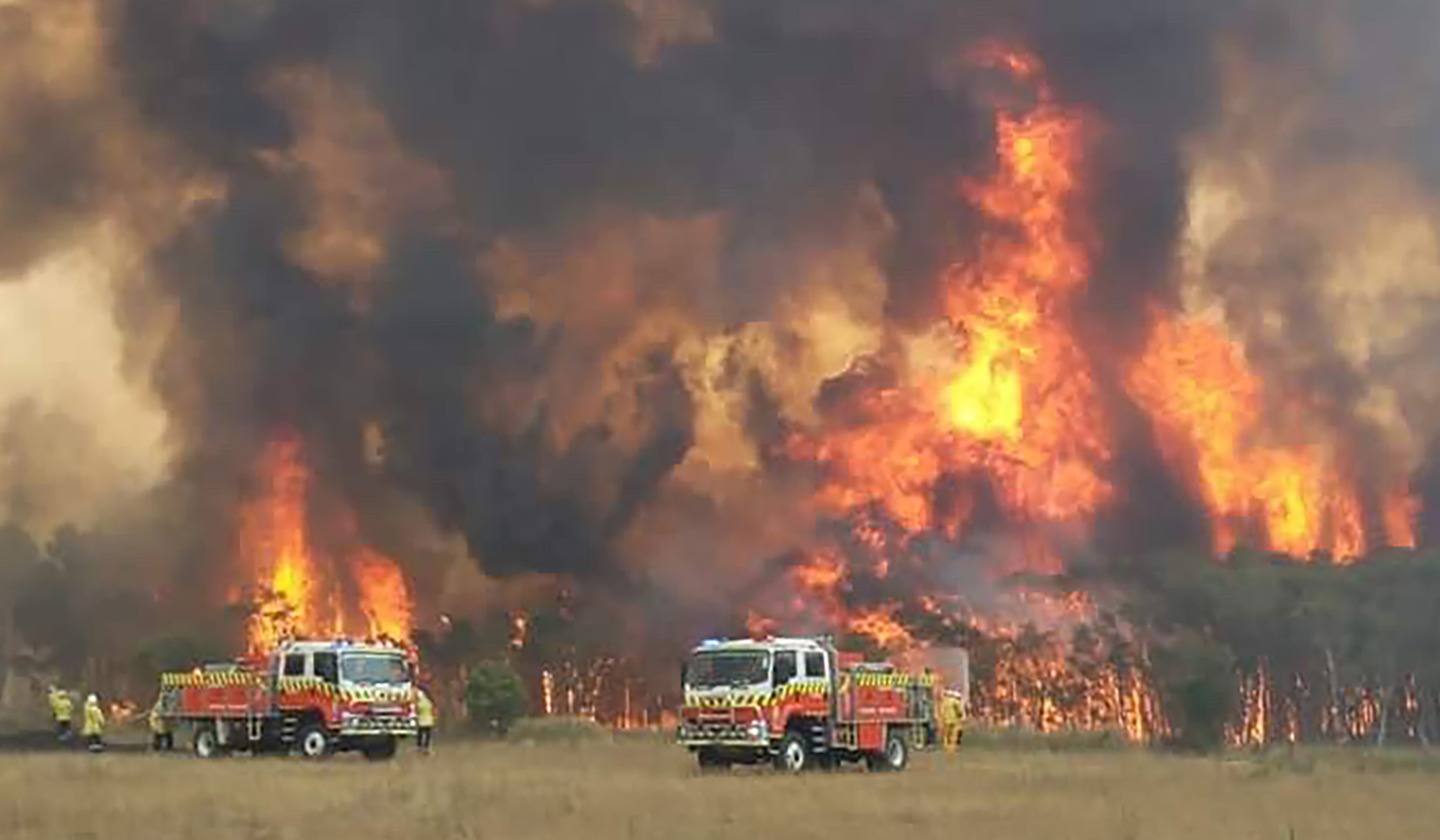