When Google users typed “Trump” into their search bars Thursday, an unexpected result might have popped up: a message from Michael Bloomberg.

“Trump Has Betrayed Us and Broken His Promises,” read an ad above any Trump-related news articles, images, and other links. “Enough is Enough.”

The temporary takeover of the president’s turf was a particularly aggressive move by a campaign that has tried to gobble up every inch of media real estate. Bloomberg has spent millions buying Google ads in recent weeks, many of them similarly targeting other search keywords, like “impeachment,” “gun control,” and various climate-related terms.

The approach mirrors the way the campaign has thrown seemingly endless piles of money at other crucial advertising platforms like Facebook and the more expensive TV. Flooding the zone has allowed Bloomberg to spread his message, bring voters to his website, and — maybe most importantly — drive up prices for every other candidate who doesn’t have a $55 billion personal fortune at their fingertips.

“When you have more people bidding on keywords and are willing to spend higher and higher amounts, that’s going to move the market,” said Steve Johnston, COO of the GOP digital firm Flexpoint Media and a former staffer on Google’s elections team. “It’s going to be notable when he [Bloomberg] comes into conflict with his competitors. That includes other Democrats and also President Trump.”

Since jumping into the race in late November, the former New York mayor has outgunned the vaunted Trump digital team on Facebook, $6 million to $3.5 million, more than tripled Sen. Bernie Sanders’ spending, and more than quadrupled that of Sen. Elizabeth Warren.

“Wouldn’t you rather have a President who builds coalitions, treats people with respect, and works for a better world?” pleads one ad targeting Facebook users in North Carolina, one of 14 states holding Super Tuesday primaries on March 3. Bloomberg is staking his bid on those states, which include California, rather than early voting states like Iowa and New Hampshire. 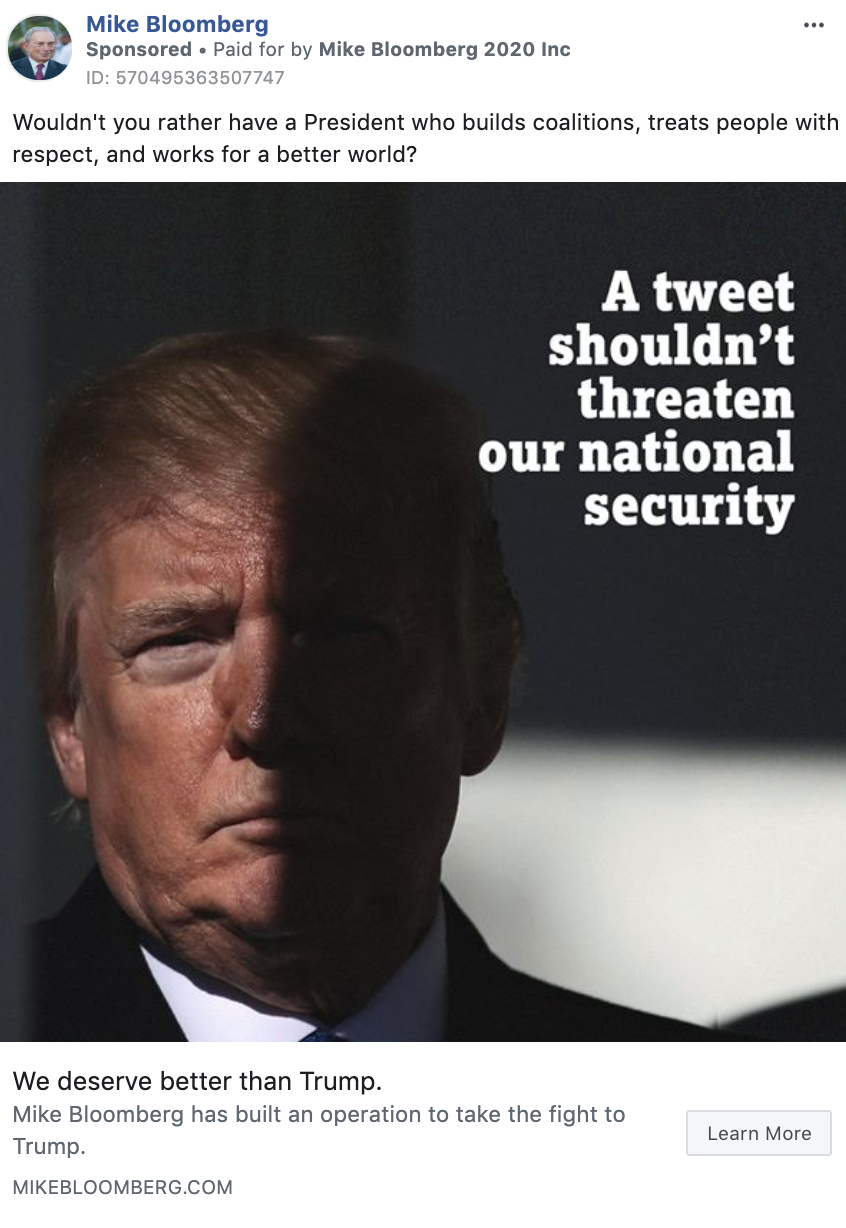 Bloomberg’s advantage on Google is even more stark. Between Nov. 23 and Dec. 28, the late-entry presidential candidate threw $14.6 million at the search engine and its sister site YouTube, according to data compiled by the digital firm Bully Pulpit Interactive. The spending makes Trump’s $2.5 million during the same span look like child’s play, and no other Democrat managed more than $1.3 million.

“The sick relationship between Trump and the NRA just has to stop,” Bloomberg said during one YouTube cameo.

Bloomberg is unique in that he doesn’t need a return on his investment to keep the lights on, according to Johnston, who advised GOP campaigns on their Google strategy during the 2016 race. That means fewer shameless fundraising asks and more attempts to persuade voters on issues or throw haymakers at Trump.

The other upshot is that the billionaire could bleed his competitors dry during automated auctions for users’ eyeballs that last just fractions of a second on Google and other digital platforms.

“If you have a number of people bidding, they [rates] could increase considerably, maybe even up to a factor of 10,” Johnston said of Google search ads.

The scale of Bloomberg’s war chest came into even greater focus Thursday, when campaigns unveiled their fourth-quarter fundraising hauls. Warren raised $21.2 million, Joe Biden cobbled together $22.7 million, and Pete Buttigieg pulled $24.7 million. When Sanders announced that he led the field by raising $34.5 million from an army of small dollars, his campaign put a dollar sign on its favorite slogan: “Not Me. Us.”

But Bloomberg’s TV spending in January alone already dwarfs those numbers. As of Thursday, the billionaire already booked $38.1 million in TV ads this month, the tracking firm Advertising Analytics told VICE News. That number could go up.

So maybe just call Bloomberg’s efforts the “Not Us. Me.” strategy.

The Democratic field has collectively booked $260 million in TV ads from the start of November through the end of February, according to Ad Analytics. Bloomberg accounts for $164 million of that, or 63%. And his campaign hasn’t even begun to take over time slots for February.

It’s also largely avoided early-voting states. Once Bloomberg’s remaining competitors move past those states and toward Super Tuesday, they’ll have to begin buying airtime in markets where TV stations will likely take Bloomberg’s cash into account when setting prices.

In the 45 days before a primary election, the FCC requires TV and radio stations to guarantee all candidates the same, lowest ad rate for any particular time slot. But that doesn’t necessarily mean it’s cheap.

“Even though everybody gets the lowest unit rate, that rate could still rocket up with a bunch of spending in a marketplace,” added Russell, who’s currently neutral in the Democratic primary.

It also means other campaigns’ TV spending might not go as far as it would have without Bloomberg in the race. And it’s particularly bad news for outside groups like super PACs, which aren’t protected by FCC rules and can pay many multiples more than candidates for a given ad slot. Nevermind used-car dealerships in Super Tuesday states trying to compete for airtime. 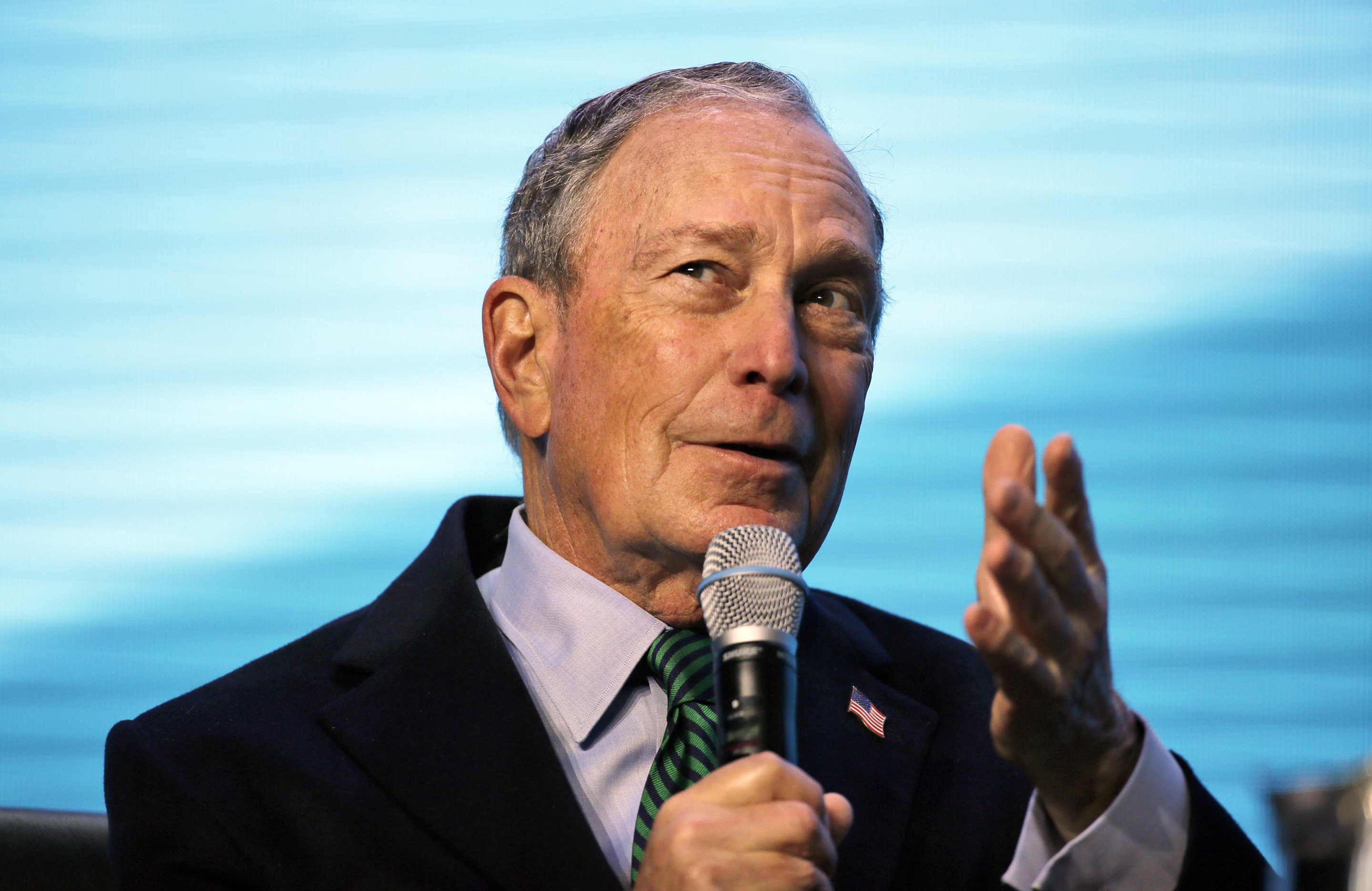 Brexit: Emmanuel Macron ‘not sure’ of UK-EU trade deal by end of year