The homeless mothers fighting to occupy a vacant, investor-owned home in Oakland just lost their court battle. Now the women and their children face immediate eviction from the residence they’ve been living in since November.

But activists say they’ll guard the house until the mothers are physically removed. And the moms promise that if they’re leaving, they’re leaving in handcuffs.

Alameda County Superior Court Judge Patrick McKinney ruled Friday that the women didn’t have a legal claim to the three-bedroom home, which is owned by Wedgewood Properties, a company that buys and flips distressed homes. The current residents of the home include Dominique Walker, a 34-year-old mother of 1- and 5-year-old girls who became homeless while working full-time; Sameerah Karim a 41-year-old who works three jobs and is still unable to afford housing; and two other mothers who remain unnamed.

READ: A homeless man got himself arrested just so he’d have a warm place to sleep.

Walker, who challenged the eviction on the basis that there should be a human right to housing, was ordered to immediately leave the property Friday, while the other women will be evicted within five days, according to KQED. The women have said since November that their ultimate hope is that Wedgewood will come to the table and make a deal to sell the property.

“I’m not leaving, we’re not leaving,” Walker said during a press conference in front of the house Friday. “They got to take me.”

The moms knew this was coming, Walker noted. The Alameda County Sheriff’s Office previously threatened to evict the women, who as a group call themselves Moms4Housing, last month, and McKinney tentatively ruled in favor of Wedgewood. But Moms4Housing argued they’re unable to find affordable housing anywhere else in the Bay Area, despite working multiple jobs, and would be left on the streets if evicted.

They recently spent the holidays in the Oakland home — Christmas tree and all.

And despite their occupation of the home being illegal, the mothers have even won support from local legislators desperate for any way to house the city’s 4,071 homeless people. Oakland councilmember Nikki Fortunato Bas stood with the women Friday.

“The right to housing is the civil rights issue of our time,” Bas said.

READ: The cop who forced a homeless man in Honolulu to lick a toilet just pleaded guilty.

In Oakland alone, the homeless population has soared by 47% in the past two years, largely thanks to the lure of Silicon Valley’s tech sector swelling its population, as well as speculative real estate investors. And the mothers’ method of protest — homeless people taking over vacant properties — previously won support and attention in the ‘80s, during what was then called the “Winter Offensive,” amid another housing crisis.

The upswing in the country’s homeless population — which reversed its years-long decline amid a nationwide rental crisis in the 2010s — is currently largely driven by a booming population of people living without shelter in California.

In a statement Friday, Wedgewood urged the “squatters” to “leave voluntarily and peacefully.” The company says it intends to soon renovate the home, which it purchased in July, and share profits from any sale with a local non-profit company that helps at-risk youth. The mothers, meanwhile, continue to ask that Wedgewood give them an opportunity to try to buy the property.

“The solution to Oakland’s housing crisis is not the redistribution of citizens’ homes through illegal break-ins and seizures by squatters,” Sam Singer, a spokesman for Wedgewood, said Friday. “That is the violent, dangerous, and unsuccessful path taken by this handful of activists and supported by three Oakland city council members and the Oakland Community Land Trust.” 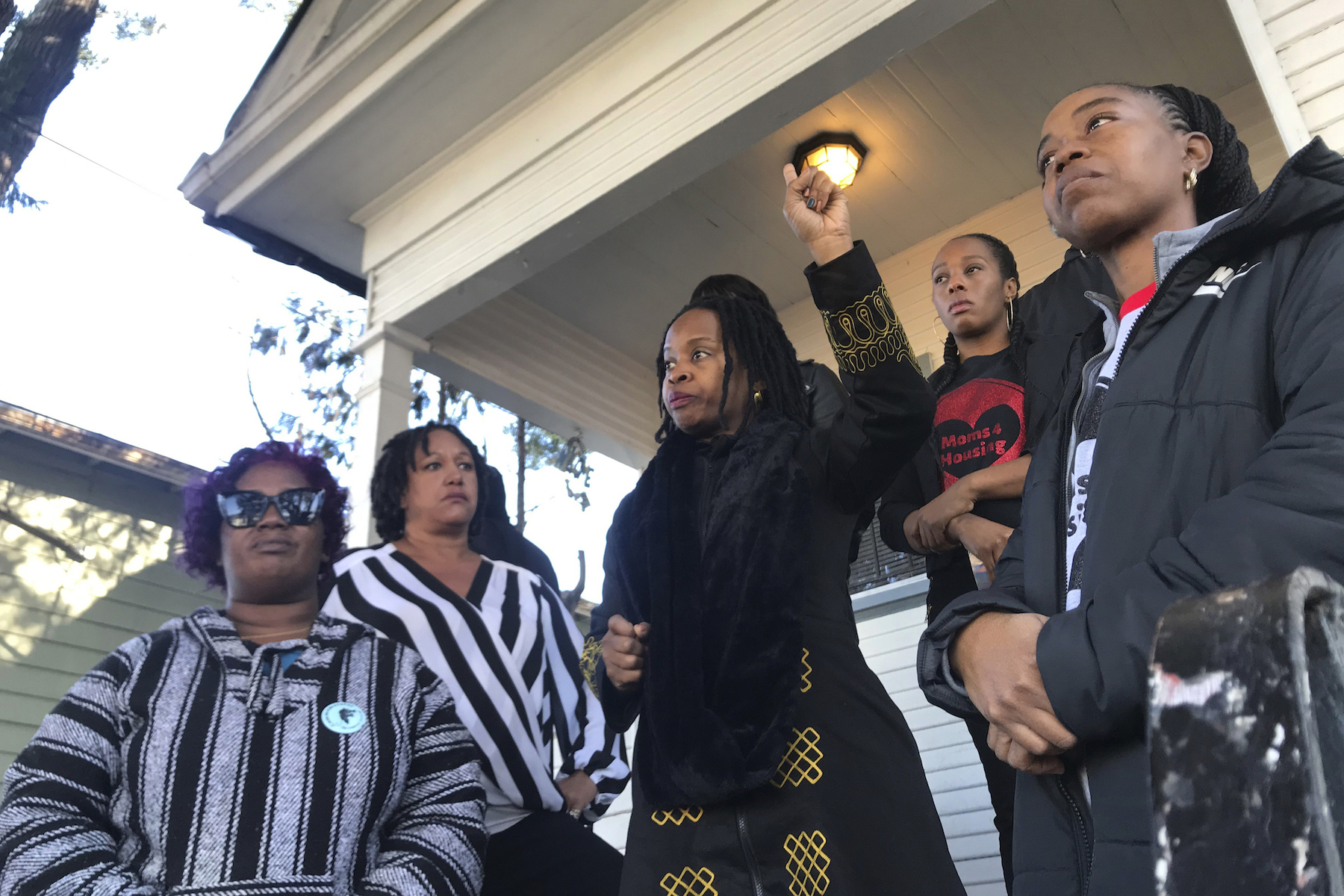 Coronavirus: ‘I may lose it all, but there’s no help for me’

What Jailing Trump Would Say About America