WASHINGTON — Just as many African-Americans say they’d consider voting for Bernie Sanders as Joe Biden, according to new a VICE News-Ipsos Poll, suggesting Sanders might not have as much of a problem wooing black voters if he’s the Democratic nominee as some have assumed.

Fully 56% of African-Americans said they’d “consider voting for” Sanders in 2020 — a statistical tie with the 54% who said the same about former Vice President Joe Biden and significantly higher than any other candidate.

“Despite frequently being described as a ‘socialist’ or ‘too liberal’, Bernie Sanders has as many, if not more, minority Americans considering voting for him as any other candidate,” said Ipsos Public Affairs Vice President Chris Jackson. 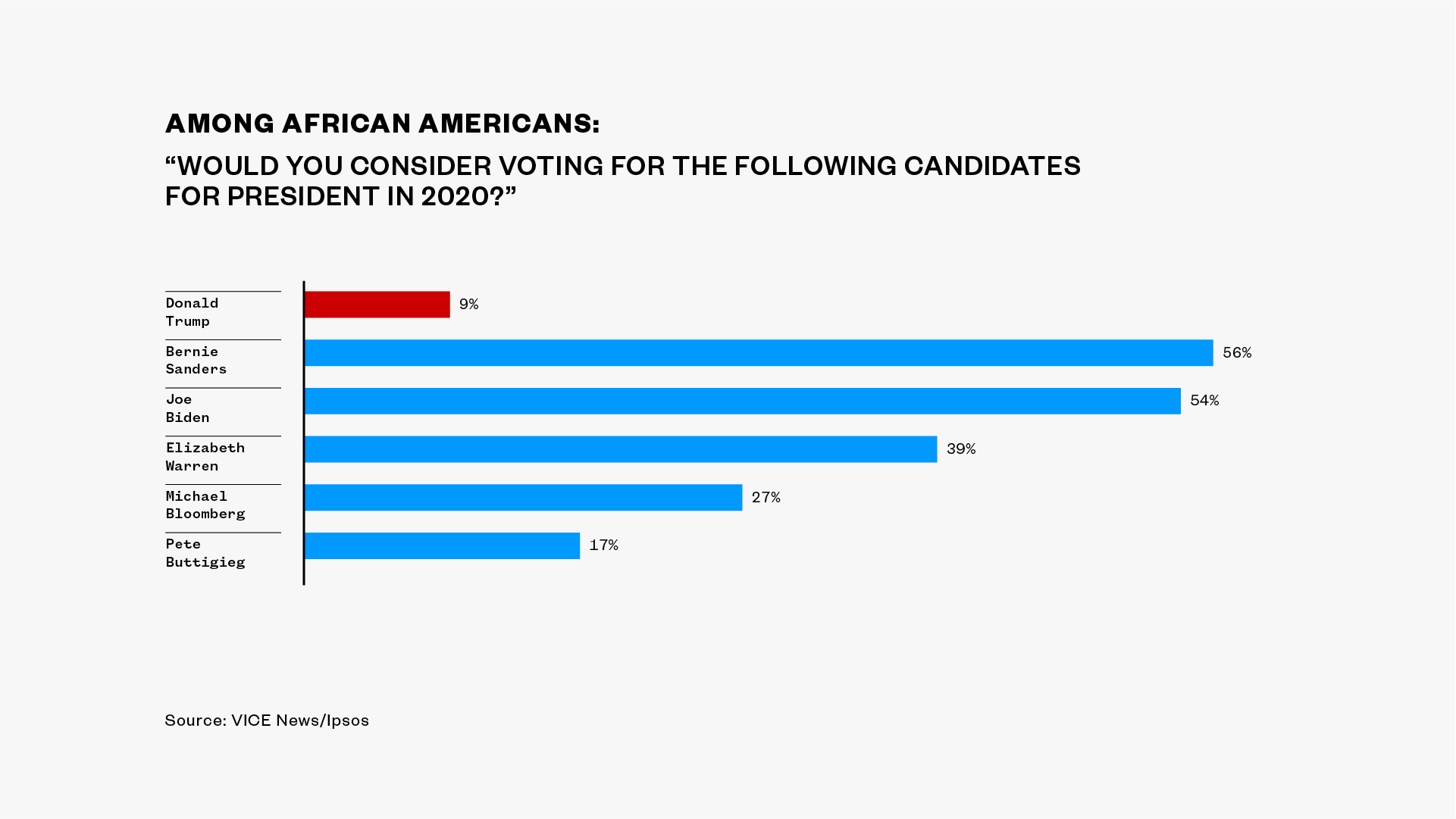 These numbers come from an online poll conducted by Ipsos for VICE News that includes extensive questions about what issues African-Americans and Hispanic Americans care about the most ahead of the 2020 presidential election. Other major findings from our poll as well as the full polling memo will be released Jan. 15.

If Sanders does become the nominee, a real possibility, his turnout of black and Hispanic voters will play a crucial role in whether he can defeat Trump.

These results also matter because Democratic voters are prioritizing electability over just about every other issue — and a big part of voters’ consideration on that question is who could do best to turn out nonwhite voters. If African-Americans had turned out in the same numbers in 2016 as they did in 2012, Trump would not have been elected.

READ: Bernie Sanders is now leading Iowa according to the best poll in the game 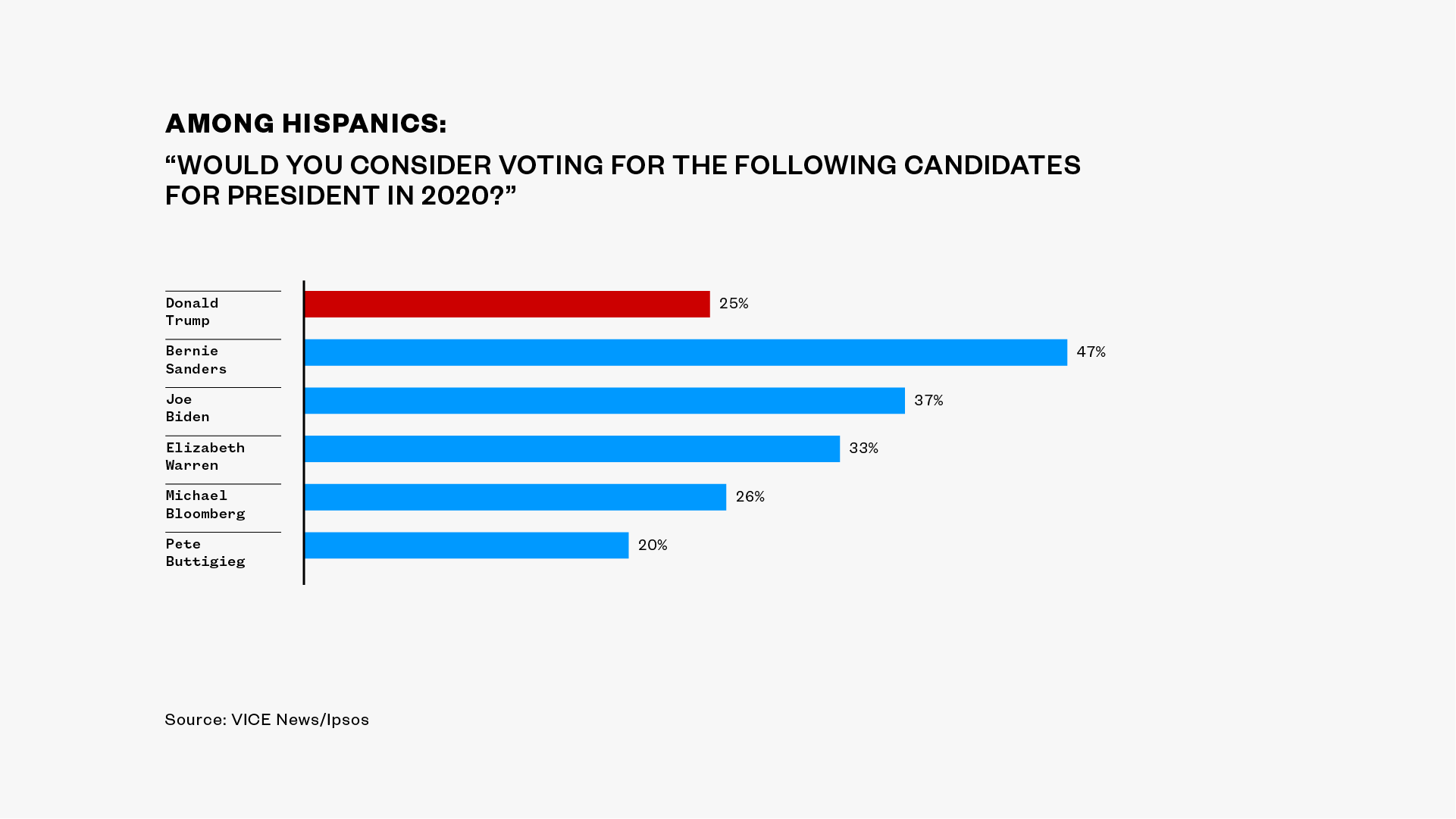 Biden has made electability a central, explicit argument in his campaign message, asserting that he’s the best candidate to recreate President Obama’s coalition of young, moderate, and nonwhite voters to win the White House and defeat Trump.

Sanders has made minority outreach a central focus of his 2020 campaign after struggling to make inroads with black and Hispanic voters during the 2016 primaries.

His failure to win over more non-white voters, especially early on in the primaries, was a big reason Hillary Clinton won the nomination. And Sanders has been battling a lingering perception that he’s not as well-suited to excite minority voters as Biden. If he can convince more voters that he has as good a chance of beating Trump as anyone else in the field, it would help his case in a big way with primary voters.

Right now, history looks like it’s repeating itself, at least in the primary. Biden led Sanders by 48%-20% among Democratic-leaning African-American voters in an Ipsos poll for the Washington Post released last week. But that doesn’t mean this pattern would hold if he’s the nominee.

A few caveats: This poll is of all Americans — a group that’s far different from the likely primary voters who will decide who wins the Democratic nomination. Sanders’ (and Biden’s) relative popularity among this broad cross-section of Americans may be as much a test of name identification as anything since the two remain by far the best-known Democrats in the field. Even in looking ahead to the general election, there’s a big difference between Americans, registered voters, and likely voters.

This poll suggests that whoever the candidate is, black voters are fired up to turn out against the president. When asked what the biggest reason for them to vote in 2020 was, 52% of African-Americans said “to vote against President Trump,” while only 37% of Americans overall said defeating Trump was their top reason to vote, compared with 38% of Hispanics.

Biden and Sanders are the best-positioned candidates in the Democratic field with both Hispanics and African-Americans at this point in the race. Among African-Americans, Sen. Elizabeth Warren comes in next with 39% saying they’d consider her vs. 29% who said they wouldn’t. Michael Bloomberg is at 27% to 37%. Pete Buttigieg is in bad shape with African-Americans at 17% to 42% on the same question.

Warren’s numbers among Hispanics are relatively better: 33% say they’d consider voting for her to 38% who say they wouldn’t. No other candidate tops 30% on that question with Hispanic voters.

This poll was conducted by Ipsos from January 8-10, 2020, on behalf of VICE Media. For this survey, a sample of roughly 2,013 adults age 18+ from the continental U.S., Alaska, and Hawaii were interviewed online in English and Spanish. The sample includes 784 white respondents, 585 African-American respondents, and 577 Hispanic respondents. 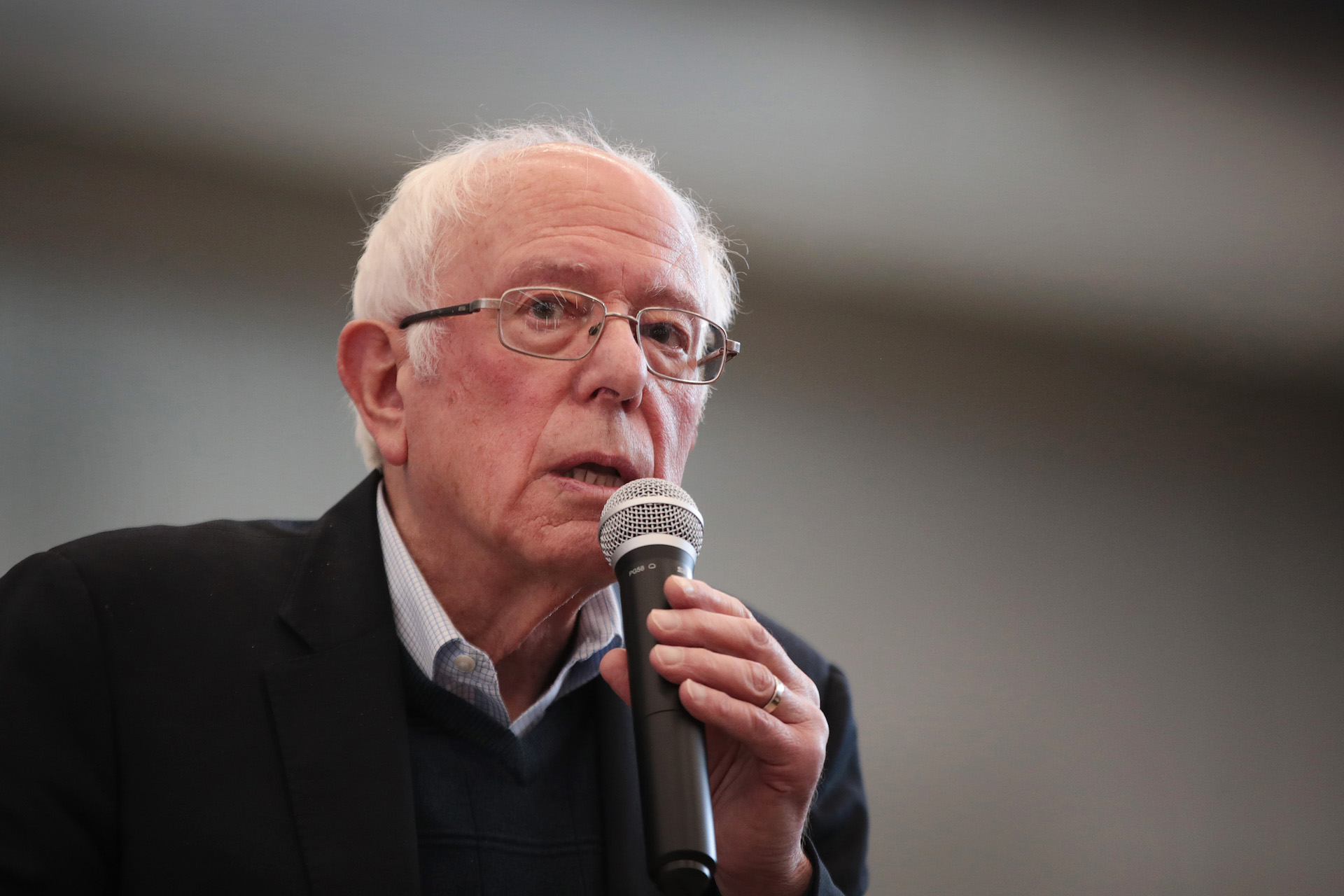