RICHMOND, Virginia — An estimated 22,000 pro-gun activists rallied near the Virginia Capitol building Monday, but despite the city being on edge in fear of violence, the protest against gun control went off without a hitch.

Many attendees were in tactical gear, heavily armed with rifles and ammo slung over their shoulders, wearing stickers saying “Guns Save Lives.” Gov. Ralph Northam, a Democrat, had declared a state of emergency on Wednesday after law enforcement intercepted threats of violence he said echoed rhetoric leading up to the violent white supremacist rally in Charlottesville two years ago.

But Monday’s event, which took place on a bitterly cold morning, was ultimately peaceful. The only person arrested was a 21-year-old woman who wore a bandanna covering her face, in violation of Virginia law (plenty of other attendees were wearing bandannas and were not arrested). Riot police were not called in, and there were no scuffles.

The far-right extremists who did show up were vastly outnumbered by the thousands of right-wingers — overwhelmingly white and male — who bussed into the city of Richmond that morning. Most importantly, a second Civil War, or “Boogaloo” as the far right calls it, did not break out, despite threats online over the last few weeks.

The state of emergency meant that anyone who wanted to attend the rally, originally billed as an open-carry affair, wouldn’t be able to bring their firearms onto Capitol grounds.

The ban resulted in a situation where about 6,000 rallygoers complied with the rule and left their guns at home (but many weren’t happy about it), and the other 16,000 brought their guns and just hung out beyond the fenced-off perimeter of the Capitol grounds, according to Richmond Police estimates.

And though the atmosphere was largely upbeat, attendees everywhere expressed anger over the way that Northam had handled their event. Some even claimed Northam wasn’t telling the truth about the threats.

“It was all lies. There was no violence,” said Christian Goolsby, 46, who was carrying a rifle and standing with a group of other men who were also armed. “They treated us like domestic terrorists. That’s what they called us.” (Goolsby declined to say if he was part of a particular organization).

Northam was the butt of every joke — and the boogeyman — during the rally. In particular, organizers Virginia Citizens Defense League (VCDL) used the rally as an opportunity to remind attendees of a scandal in February, when it came out that he was in a picture of two people wearing blackface and Klan robes (he apologized for the photo, but never said which one he was). VCDL distributed signs saying “The Man Behind the Sheet Wants Your Guns.” One of the comparatively few black rally-goers walked around waving a Trump flag, saying “I’m Gov. Ralph Northam and I’m in blackface,” while people laughed.

Northam was called a traitor and compared to Hitler by rally-goers for backing gun control measures introduced by the newly-Democratic legislature, which flipped blue in November for the first time since 1994. People sold t-shirts saying “My governor is an idiot,” while others held up signs calling him a racist. One 20-year-old in a banana costume was carrying a home-made sign saying “Northam Sucks Bloomberg’s Banana,” a reference to billionaire Michael Bloomberg who founded Everytown for Gun Safety.

Some rally-goers even rolled out a guillotine that was emblazoned with the words, “The penalty for treason is death.”

READ: The U.S. truly has no idea how many people buy guns without background checks.

“We came here because a tyrannical king is trying to take away our Second Amendment rights,” said Jerome Bell, 53, who said he’s from Virginia Beach and running for Congress.

“We are law-abiding citizens,” said Justin Dorton, 33, who drove up from North Carolina for the rally and carried an AR-15. “People have planned this for a long time. The escalation was by the governor.”

Amidst the thousands of gun-lovers who showed up to flex their Second Amendment rights were right-wing celebrities or YouTubers who strolled through the crowd doing interviews and signing autographs. One man was walking around in a red Christmas sweater emblazoned with the words “Epstein Didn’t Kill Himself” — and a signature by notorious conspiracy theorist Alex Jones. Jones had been spotted driving around Richmond Sunday and early Monday morning in a tank-like vehicle, while shouting into a microphone.

Jones was, at times, accompanied by members of the Proud Boys, a far-right street-fighting gang. There was also Joey Gibson, head of right-wing Patriot Prayer, of the Pacific Northwest, who is currently facing felony charges for brawling with antifa.

Gun rights activist Kaitlin Bennett “gun girl,” who got famous for organizing open carry events at Kent State University, was also present. Members of the National Guard, a white nationalist group, were also seen among the crowds, as were members of the League of the South, another white nationalist group that’s banned from organizing in Charlottesville because of their role during Unite the Right.

Not apparently present were the hardcore neo-Nazis who’d reportedly discussed opening fire on the rally from an elevated position. In the last week, seven alleged members of The Base, a neo-Nazi group, were arrested by federal and state law enforcement. At least three of those members had large amounts of ammo and firearms on them — and were talking about carrying out an attack in Richmond, according to the Wall Street Journal.

But despite the fact that law enforcement may have thwarted what could have been a very violent attack, event organizers are using the day’s success to take a victory lap. Some members of the event page for the rally shared a meme marking themselves “Safe From Northam’s False ‘State of Emergency’.” 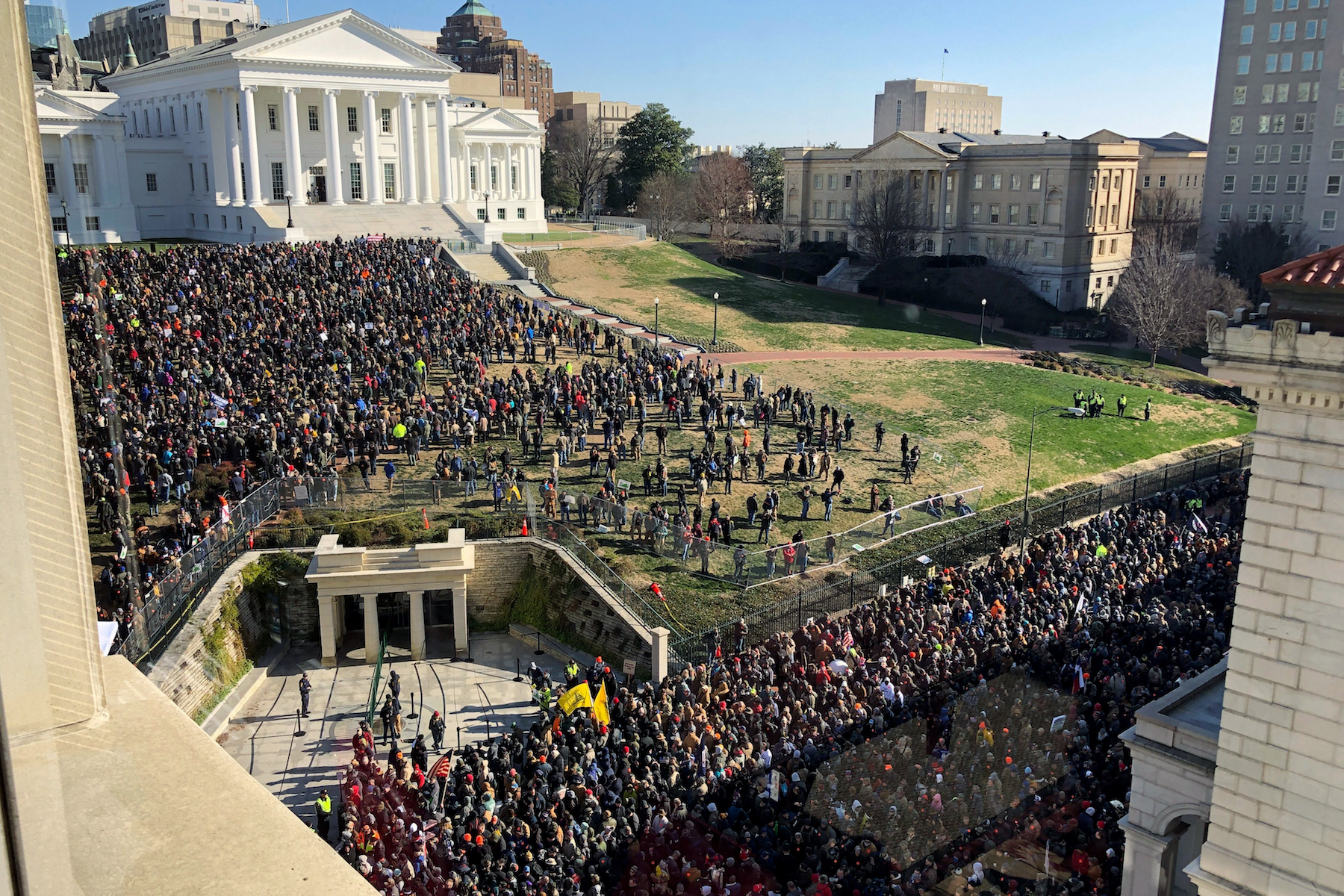