As a seasoned journalist writing about fine wines, gourmet cuisine, and luxury travel, people often assume I know or have heard about everyone in these industries. I am familiar with many notable chefs and winemakers, and I have visited numerous amazing places. However, when you consider the vast number of incredible chefs, divine beverages, and opulent destinations in the world, how could anyone know them all? Recently, I traveled to Puerto Rico with my daughter Brittney, and we dined at the 1919 Restaurant in the Condado Vanderbilt Hotel. It was my pleasure to meet Executive Chef Juan José Cuevas, an internationally renowned chef with an impressive list of prestigious culinary awards. Although well-known to many, he was a spectacular new find for me.

Chef Cuevas, a native of Puerto Rico, took the position of executive chef at 1919 Restaurant in 2012 upon his return to the island. A 20-year legacy of significant accomplishments in both the United States and abroad accompanied him.

Chef Cuevas began his culinary journey in the states as an honors graduate of the Culinary Institute of America. While at the Institute, Chef Cuevas often worked with school instructors. He once served as a translator for a guest chef, Pedro Subijana, the chef/owner of Arkelare, a three-star Michelin restaurant in San Sebastián, Spain. In 1995, Chef Subijana invited Chef Cuevas to come and work with him. This connection was the first of many significant encounters that opened doors for Chef Cuevas’s incredible culinary journey.

After his time with Chef Subijana, Chef Cuevas returned to the states to work as Poissonnier, entremetier, and saucier at The Dining Room at the Ritz-Carlton in San Francisco under the tutelage of Chef Sylvain Portay. Over the years, Chef Cuevas learned from and worked with many great chefs around the world. He expanded his knowledge under Tracy Jardin at Jardinière and did a brief externship in Barcelona at the three-star Michelin restaurant El Raco de Can Fabes under Chef Santi Santamaria. He continued his culinary ascent while working for illustrious Chef Alain Ducasse at the Essex House under Didier Elena and as sour-chef-de cuisine under Christian Delouvrier at Lespinasse. The restaurant received a four-star rating from The New York Times during Cuevas’s two-year term. 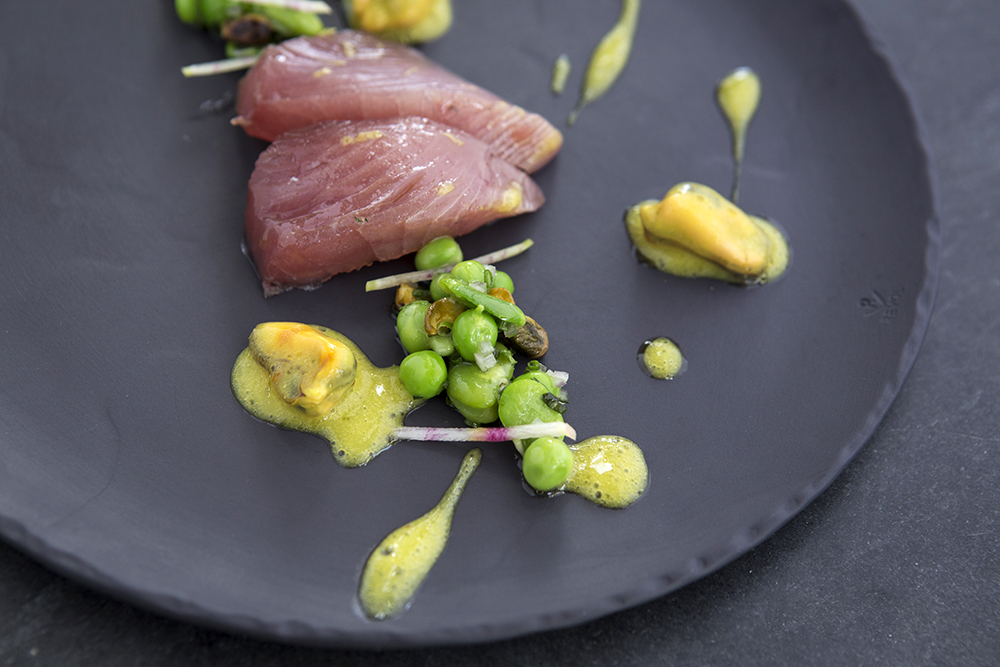 Chef Cuevas later collaborated with Chef Dan Barber at Blue Hill Restaurant in New York. During their four-year partnership, the restaurant received a Michelin star and a three-star rating by The New York Times. Chef Cuevas continued his culinary climb working as chef-de-cuisine at Michelin-star-rated Restaurant 81. He then moved on to the position of executive chef at the Pluckemin Inn, where they received a three-star rating from The New York Times and the AAA Four-Diamond Award in 2010.  Each accolade is significant, but Chef Cuevas says he is most proud of the Chef de l’Avenir (Chef of the Future) Award in 2009 from the International Academy of Gastronomy and the New York Times review of Blue Hill Restaurant.

Chef Cuevas is grateful to all his mentors. I asked him, “Which chefs were most influential in your rise in the industry, and how did they impact your life?” He said, “l learned everything from Sylvain Portay. Alain Ducasse taught me perfection, discipline, techniques, and respect for the product. Santi Santamaria cultivated a love within me for his region, a renewed passion, a knowledge of food history and even more discipline. Dan Barber encouraged a connection with farming and inspired my resolve for farm-to-table dining.” Chef Cuevas said, “These chefs were buff and amazing. The gave me so much information, rules, and discipline, which helped me to become the chef I am today.” 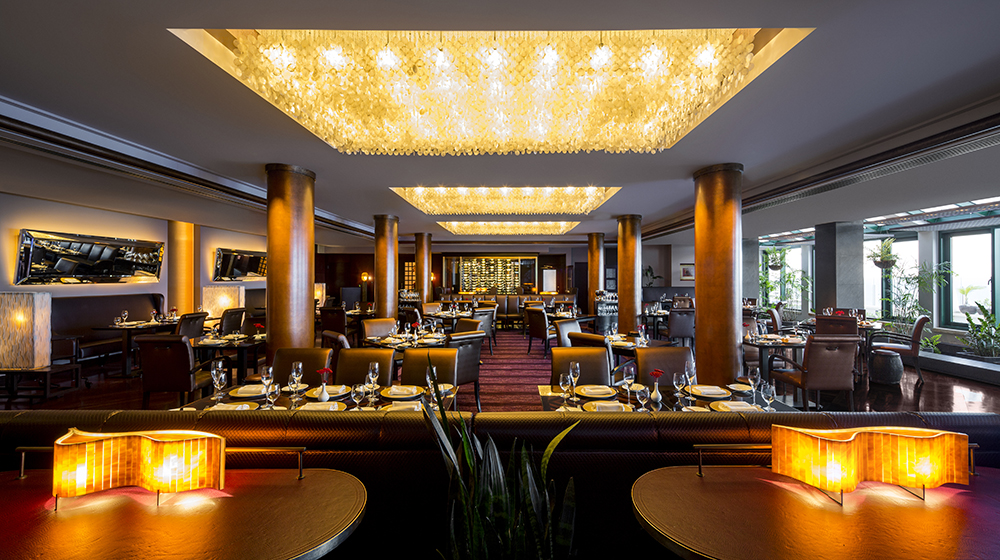 At 1919 Restaurant, Chef Cuevas utilizes his natural talent, friendly personality and knowledge to make the dining experience exciting and appealing for everyone. He loves being the executive chef at the restaurant. He enjoys teaching his staff and delights in seeing how he and his team make guests smile with their food. He shared that the hardest part of each day is the lack of time; there is never enough. I asked him if he were on Iron Chef America and he could select the secret ingredient, what would it be? He answered, “Eggplant.” He exclaimed that he would make salads, garnishes, canapes and even a rum caramelized eggplant dessert with chocolate cremaux and ricotta ice cream.

At the 1919 Restaurant, Chef Cuevas creates fresh contemporary cuisine using hand-selected local products. He works diligently with Sommelier Luis Simone to taste food and wine to put together the perfect pairings for his tasting menus.

My dinner in 1919, one of the two top restaurants in Puerto Rico, was a treat. Brittney and I began with a few glasses of Cava, Spain’s version of Champagne, followed by an assortment of canapes: a caramelized onion-truffle empanadilla, potato-morcilla cake, and quail eggs, and a bacalao-shrimp croquette.

We savored a light cucumber-coconut gazpacho followed by fingerling potatoes with osetra caviar, truffle vinaigrette, and chervil. Next, we dined on tuna-hiramasa Crudo with wasabi pearls that burst open and flooded my taste buds with mouthwatering spice. The local chayote, grapefruit and goat cheese salad arrived with crispy Brussels sprouts and a tasty Thai vinaigrette dressing.

A perfectly cooked scallop was served “a la plancha” with a mussel, two clams, and a fennel-spiced sauce. The local dorado with aromatic lentils and tamarind-red-wine jus whispered India, and the root vegetable and ricotta ravioli were scrumptious. The roasted duck with chickpeas, zucchini-pistachio jus and the side of potato churros were simply outstanding.

We ended the meal with coconut sorbet and local strawberries, lemon curd pavlova, and a pine nut caramel tart with white chocolate and tahini vanilla ice cream. Each course came perfectly matched with a delicious glass of wine, and Chef Cuevas visited the table twice to chat with us. It is no wonder that his career has flourished. He is instantly likable, extraordinarily talented and emanates love for Puerto Rican food and all that the island has to offer. When I asked him if he had a future goal, he said, “I would like to become a sommelier.”

Chef Cueva, Sommelier Luis Simone, and the rest of the staff in 1919 were pleasant and knowledgeable. Visit the fantastic island of Puerto Rico. Enjoy the ocean view while dining at the 1919 Restaurant, where you will discover delectable food and wine delivered in an opulent setting at the Condado Vanderbilt Hotel.

Why More Consumers Are Relying on Subscription Boxes

Rolex and The Tennis Players Who Wear Them, Australian Open 2021 Edition