The president’s team asserted Trump had good reason to ask Ukraine’s president to “look into” Biden, whose son Hunter held a lucrative paid position on the board of a Ukrainian natural gas company called Burisma while his father was handling Ukraine policy in the White House.

The president’s defense team focused, at length and in minute granularity, on the details of Hunter Biden’s employment at a time when his father was urging Ukraine to root out corruption.

But they never quite made the direct claim that any real wrongdoing took place. And that may have been simply because they can’t: While even some of senior Biden’s associates have said the arrangement presented the appearance of a potential conflict of interest, no serious evidence of wrongdoing or illegal activity by Joe or Hunter Biden has ever emerged.

Instead, the presentation Monday appeared designed to raise questions about the arrangement and justify Trump’s request to Ukrainian President Volodymyr Zelensky on the now-notorious July 25 phone call as some kind of legitimate anti-corruption activity.

Democrats have blasted the request as part of a campaign to pressure Ukraine to announce an investigation of Biden ahead of the 2020 election, when Biden is a top contender to win the Democratic nomination.

Trump’s attorney Pam Bondi kicked off the assault on Biden, zeroing in on the moment when the former vice president insisted in 2015 that Ukraine fire a top prosecutor named Viktor Shokin.

“Why was Hunter Biden on this board?”

“Why was Hunter Biden on this board?” she asked. “All we are saying is that there was a basis to talk about this, to raise this issue. And that is enough.”

The Trump team’s decision to task Bondi, the former attorney general of Florida, to make the case against Biden came with its own particular irony, given her background with Trump.

When Bondi was Florida AG, she nixed an investigation into Trump University around the same time she received a $25,000 donation from one of Trump’s charities via a political action committee that was raising money for her reelection. Bondi’s spokesperson has denied Trump’s donation was in any way connected to her decision not to pursue action against Trump University.

While Bondi presented Biden’s bid to remove Shokin as questionable, it was supported by official U.S. government policy, as well as America’s European allies.

Trump’s attorneys suggested Biden was secretly motivated by a desire to block an investigation of corruption at Burisma. In fact, the opposite is far more likely true: Shokin’s removal has been widely seen as assisting anti-corruption investigations in Ukraine, because Shokin was seen as a participant in the corrupt dealings for which the eastern European country is widely and justifiably famous.

The Ukrainian oligarch and former government official behind Burisma, whose name is Mykola Zlochevsky, has indeed been investigated in Ukraine over allegations of corruption and tax evasion. He’s never been charged.

Trump attorney Pam Bondi insisted that her point was really that Trump had legitimate reason to ask Zelensky to “look into” the Bidens.

“Here on Planet Earth, the conspiracy theory that Bondi repeated has been conclusively refuted,” Biden spokesperson Andrew Bates wrote in a statement. “The diplomat that Trump himself appointed to lead his Ukraine policy has blasted it as ‘self serving’ and ‘not credible.’”

But Trump’s lawyers said the questions deserved investigating — apparently, at the level of two heads of state having a private phone call.

“Why would it not merit investigation?” asked Eric Herschmann, another Trump lawyer who followed Bondi, referring to the “supposedly discredited” allegations against the Bidens.

“Ukraine had a particularly bad corruption problem,” he said. The payments to Hunter were “highly questionable.”

The Trump team also took a page from the Democratic House impeachment managers’ playbook in using video clips to help press their point. In this case, they rolled out video of Hunter saying that might not have received such high-paying work if his father weren’t Joe Biden. And they played a clip of Joe Biden himself boasting, in public remarks, about pressuring Ukraine to fire Shokin.

Yet the moment also presented Trump’s defenders, who have spent weeks arguing that the well-documented case against Trump for pressuring Ukraine to investigate his Democratic, with a certain ironic turn.

Now, they were arguing that Trump’s efforts to spur an investigation were legitimate, even though Trump has rarely, if ever, expressed concerns about corruption elsewhere that did not involve a political opponent. Rather, Trump’s chummy relations with the leaders of countries like Russia or Saudi Arabia have not involved parallel personal entreaties for them to investigate corruption.

And while Trump’s defenders have just spent weeks arguing the Democratic case to impeach Trump wasn’t sufficiently air-tight, they presented a case against Biden that contained no concrete allegation of wrongdoing by the vice president, but by their own account, was simply aimed at raising questions.

—Liz Landers contributed to this report.

Cover: Pam Bondi, a White House adviser and member of the legal team, arrives at the Capitol in Washington, Monday, Jan. 27, 2020, during the impeachment trial of President Donald Trump on charges of abuse of power and obstruction of Congress. (AP Photo/Patrick Semansky) 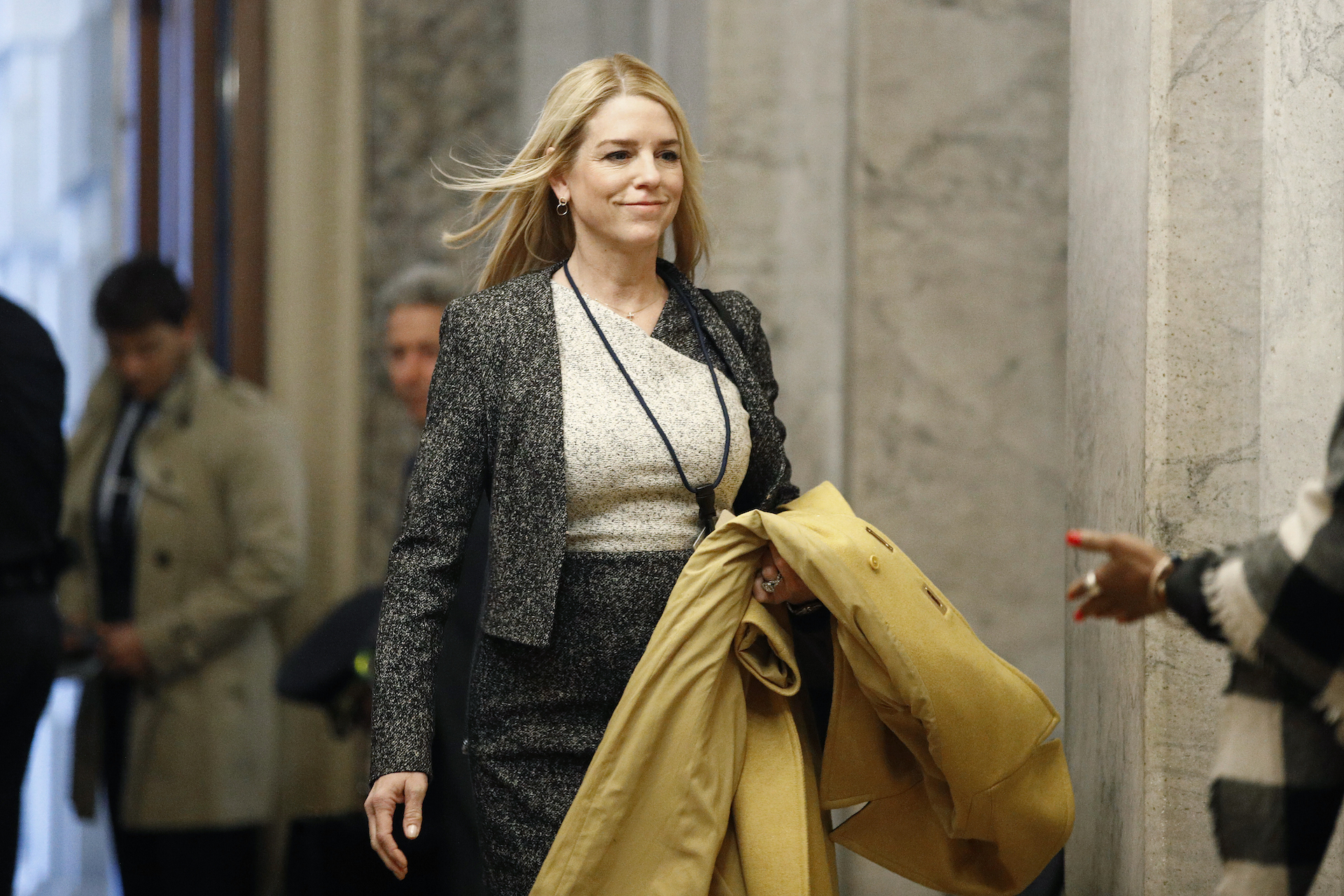 Felixstowe Port in ‘chaos’ as Christmas and Brexit loom