WASHINGTON — A key GOP swing voter in the Senate said there’s “no need” to bring new evidence into President Trump’s impeachment trial, a development that means Democrats face an all-but-insurmountable challenge in their quest to bring new witnesses into Trump’s trial.

Sen. Lamar Alexander of Tennessee indicated Thursday night he will oppose opening the door to new witnesses in a vote currently expected to come as soon as Friday.

“I worked with other senators to make sure that we have the right to ask for more documents and witnesses, but there is no need for more evidence to prove something that has already been proven and that does not meet the United States Constitution’s high bar for an impeachable offense,” Alexander said in a statement.

Alexander argued that the House Democrats have proved the facts of their case against Trump with a “mountain of overwhelming evidence.” But he said those actions were simply “inappropriate,” and did not rise to the level of an impeachable offense. New fact witnesses would be redundant to prove the president did it, and are therefore unnecessary, Alexander said.

Senator Susan Collins of Maine, another key Republican swing vote, said she would vote for witnesses. But Democrats need four Republicans to break with party lines in order to bring witnesses to the chamber.

The other Republican senators who’ve been seen as likely yes votes on witnesses are Sen. Mitt Romney of Utah and Sen. Lisa Murkowski of Alaska. Alexander had been eyed as the crucial fourth vote. Romney has indicated that he, too, will vote to call witnesses, according to The New York Times.

But Alexander’s statement therefore looked a lot like the death knell for Democratic hopes to hear from Trump’s former National Security Advisor John Bolton, who’s said he’d be willing to answer a subpoena from the Senate.

Bolton’s forthcoming book reportedly says Trump explicitly linked a freeze in military aid to Ukraine with demands that the country announce investigations into Democrats, including a top Democratic challenger against Trump for the presidency in the forthcoming election, former Vice President Joe Biden.

READ: Lev Parnas has a wild plan to burn Trump with a million selfies.

The House of Representatives impeached Trump in December for abusing his office by pressuring Ukraine to investigate Biden, and for then blocking the Congressional investigation into what happened.

Alexander said Trump’s guilt in the Ukraine pressure campaign was obvious. But he said he thinks the voters should decide whether Trump should continue on as president — not the Senate.

“The question then is not whether the president did it, but whether the United States Senate or the American people should decide what to do about what he did,” Alexander said. “I believe that the Constitution provides that the people should make that decision.”

Collins said she thought bringing in more witnesses would shed light on some of the big questions that remain outstanding.

“I believe hearing from certain witnesses would give each side the opportunity to more fully and fairly make their case, resolve any ambiguities, and provide additional clarity,” Collins said. “Therefore, I will vote in support of the motion to allow witnesses and documents to be subpoenaed.”

Without Alexander, Democrats will need a miracle to break off enough Republicans to force the Senate to call Bolton or other witnesses.

They may, however, have just enough votes to arrive at a 50-50 tie, since Democrats control 47 votes and may be able to scrape off three more from the GOP. That wild scenario would put the Senate in uncharted territory in the context of a high-stakes impeachment drama.

A tie could potentially allow Chief Justice John Roberts, who is overseeing the trial, to wade in and resolve the dispute. But many observers believe that while Constitutional and parliamentary details may be complicated, a tie is widely expected to mean: No witnesses.

Cover: Senator Lamar Alexander, a Republican from Tennessee, left, speaks with Senator Susan Collins, a Republican from Maine, as they arrive for a vote on Capitol Hill in Washington, D.C., U.S., on Tuesday, Feb. 12, 2019. (Photo: Al Drago/Bloomberg via Getty Images) 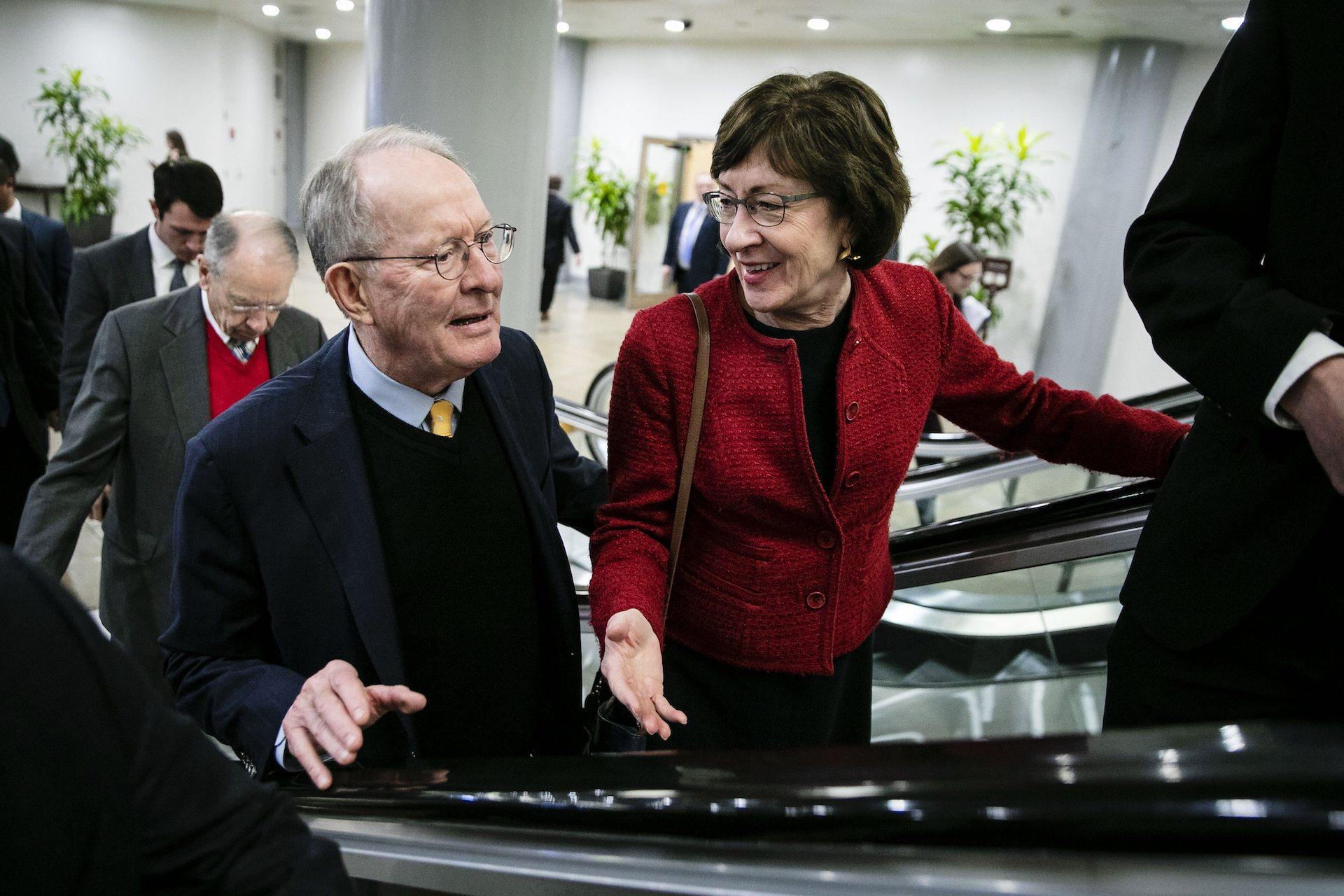 China to cut import tariffs on pork and tech parts

Mayor Pete Thinks He Can Flip Trump Counties in Iowa