With white supremacy groups around the world increasingly sharing information and tactics, a new bill aims to make sure U.S. law enforcement can assess threats from foreign groups and prevent their extremist violence.

The “Transnational White Supremacist Extremism Review Act,” introduced by New York Rep. Max Rose, a Democrat, on Thursday would require the Department of Homeland Security to compile threat assessments of foreign white supremacy groups, which can then be used by local, state and federal law enforcement to monitor extremist activity more effectively.

It’s part of an ongoing effort led by Rose to pressure the U.S. government to take the threat of those groups seriously.

“We can’t only be focused on the threats of yesterday. We need to stay ahead of the curve and ensure law enforcement has the tools and information needed to keep us safe against the threats of today and tomorrow,” said Rose.

DHS unveiled a new counterterrorism strategy last September that included formal recognition, for the first time, of the threat posed by white nationalism and white supremacy. But it’s not clear whether they’ve identified any particular groups or organizations as especially dangerous, or whether they consider the threat to be an international one, as well as domestic.

A increase in right-wing extremism has been observed all around the world, from Europe, to Russia and Ukraine, Canada, Australia, and New Zealand. And many of the groups that have cropped up in recent years are connected to one another online, sharing ideas, memes, aesthetics, and tactics across borders and oceans.

Rose’s bill would apply specifically to groups that are based outside the U.S., such as the Feuerkrieg Division (FKD), a small neo-Nazi organization that embraces the violent philosophy of acclerationism and is affiliated with the group Atomwaffen, a similarly violent American neo-Nazi group that’s been linked to at least five murders. FKD’s leader is based in Estonia and membership is primarily European, but it has increasingly drawn American members. Last summer, a neo-Nazi in Las Vegas who was allegedly in communication with FKD members was arrested for plotting to bomb Jewish and LGBTQ communities. Fliers for the group have been found scattered across the University of California’s Santa Barbara campus and the University of North Florida, as well as near a black church in Spokane, Washington.

Read more: The U.S. doesn’t prosecute far-right extremists as terrorists. Here’s how it could.

The bill could also apply to the Misanthropic Division, an international group that was founded in 2014 in Ukraine and has close ties to the Azov Battalion, a neo-Nazi-aligned regiment of the Ukrainian National Guard. A white supremacist radio host from Indiana can often be seen in videos with the banner of “Misanthropic Division” behind him, according to Bellingcat. The group also has close ties to Atomwaffen.

Rose’s legislation comes a week after several members of another international far-right group The Base were arrested in the U.S. and accused of plotting mass violence at a gun rally in Virginia.

Last October, Rose and dozens of House Democrats wrote a letter to the State Department calling on them to designate several international far-right groups as foreign terrorist organizations, including Nordic Resistance Movement (a neo-Nazi network from Scandinavia), National Action (a neo-Nazi group based in the U.K.) and Azov Battalion.

A month later, the State Department responded stating that they do “not comment on internal deliberations” related to foreign terror organization designations. “However,the Department is committed to the appropriate use of its designations authorities to target foreign groups or individuals engaging in terrorist activity to prevent them from obtaining resources and support,” they added, “regardless of their ideology or motives.”

Cover: In this Friday, Nov. 11, 2016 file photo, nationalists, burning flares as they march in large numbers through the streets of Warsaw to mark Poland’s Independence Day in Warsaw, Poland. Fascists and other far-right extremists are set to assemble in Warsaw for a march that has become one of the largest gatherings in Europe for increasingly emboldened white supremacists. (AP Photo/Czarek Sokolowski, File) 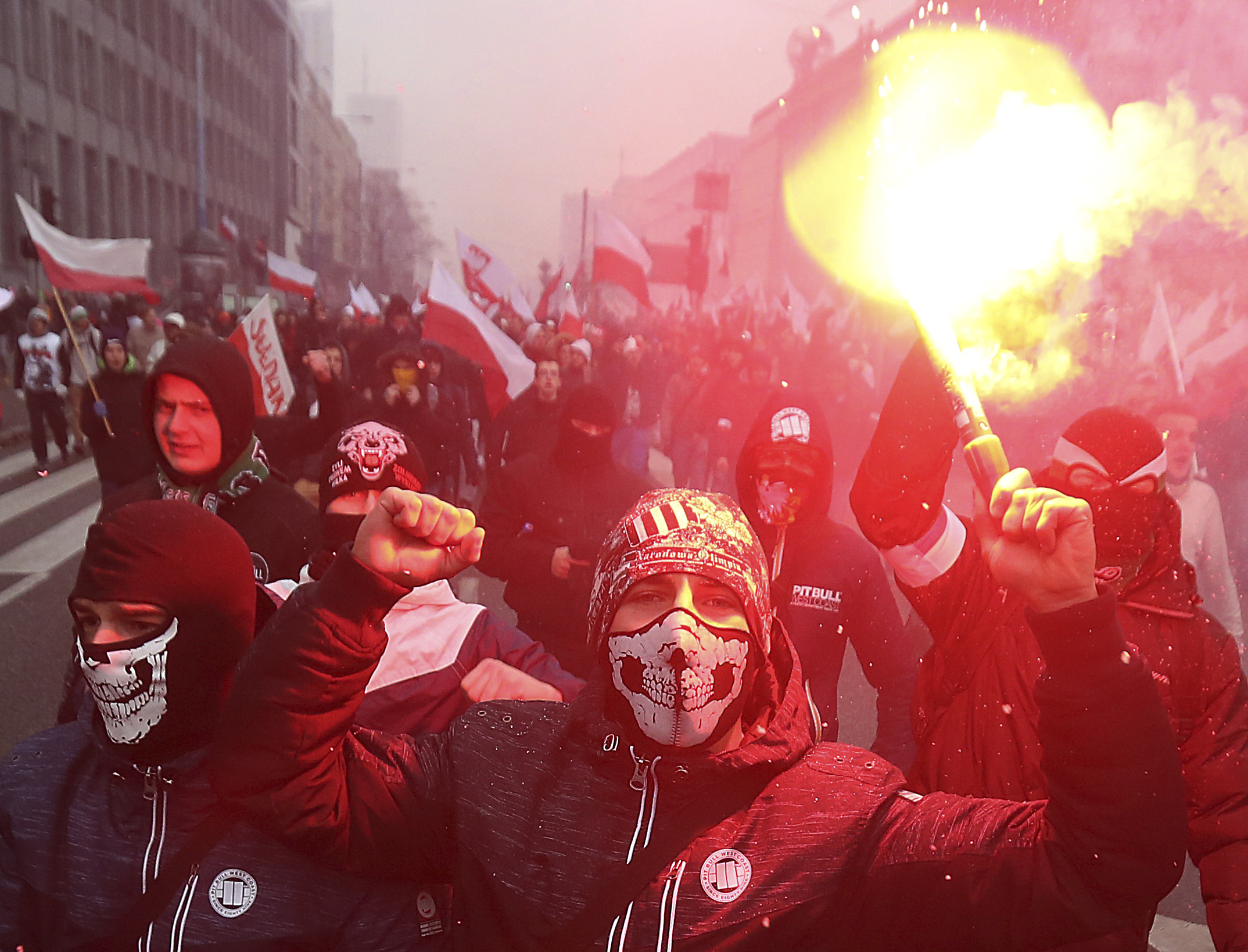 Federal Cops Are Already in Seattle and the Mayor Is Pissed