But rather than a bang, the U.K. left with a whimper.

For all the political turmoil and existential angst that have engulfed Britain over the last four years, in the end, almost nothing will change — for now. Trade and travel will continue as normal. U.K. citizens will still be free to travel around the EU without a visa. London will still be governed by Brussels’ rules, and the European Court of Justice will still have final say over the U.K.’s legal affairs.

Unfortunately for those hoping that Brexit would mark the end of the seemingly never ending drama, Friday starts what’s likely to be years of tortuous negotiations and trade deals as the U.K. attempts to establish links with every other country in the world.

Boris Johnson, who hosted a Brexit party on Downing Street Friday night — one with roast beef, blue cheese, and English sparkling wine on the menu — addressed the nation just before the formal departure at 11 p.m. local time (6 p.m. ET).

“The most important thing to say tonight is that this is not an end but a beginning,” Johson said. “This is the moment when the dawn breaks and the curtain goes up on a new act. It is a moment of real national renewal and change.”

Muted celebrations went down across Britain on Friday. Nigel Farage, leader of the Brexit party, organized the highest-profile public event, a “Leave Means Leave” party in Parliament Square in central London. But pro-EU protesters sought to disrupt the event and held up placards saying “We’ll be back.”

In Brussels, lawmakers joined hands and sang Auld Lang Syne to see off the departing U.K. members of parliament. They wanted Brexit to happen without much fanfare. The EU, which fought the U.K. on every point of the deal, just lost one of its most important economic, diplomatic, and military powers.

For Britons waking up on Saturday morning, life will pretty much continue as normal.

But some things will change. The U.K.’s 73 members of the European parliament are now out of a job, and Johnson and his ministers won’t be automatically invited to EU Council summits.

Most importantly for many Brexiteers, Britain’s passports will now be blue rather than purple.

Saturday marks the first day of an 11-month transition period during which the U.K. remains obliged to follow EU rules and pay into the EU budget. At the end of the period, however, major changes could happen, depending on the outcome of negotiations with the EU and other countries.

Without a free-trade agreement in place, the U.K. would leave the single market and customs union on Dec. 31. That would mean taxes would automatically levied on all goods leaving the U.K. for the EU.

The outcome of the talks will impact how easily Britons can travel and work in other EU countries and whether or not they will need visas. The negotiations will also decide how a wide range of other sectors will work, including fishing rights, regulation of medical products, law enforcement cooperation, intelligence sharing, electricity supply, and crucially, access to the EU’s single market.

The clock is already ticking to have everything in place by then for an orderly switch over.

But EU officials and trade experts have voiced their doubts that such a complex trade deal can be done in 11 months. Similar deals in the past have taken years of difficult talks.

And that’s before they get to the issue of the Irish border.

Northern Ireland (which, as part of the U.K. is leaving the EU) and the Republic of Ireland (which is remaining inside the EU) share a 300-mile border. The two sides need to figure out how customs checks at the border will work, which experts predict will prove one of the biggest stumbling blocks before the U.K. can strike a deal with the EU.

But negotiating with Ireland isn’t the only other dark cloud on the horizon for Johnson.

The Scottish government also still wants a second independence referendum, though Scotland’s First Minister Nicola Sturgeon admitted Friday that a vote was unlikely to happen this year. Across the Irish Sea in Northern Ireland, which voted to remain in the 2016 referendum, calls have grown for a vote on reuniting with the Republic of Ireland, which many believe could happen within a generation.

Not only will Johnson have to make a deal with the same EU officials who negotiated the Brexit deal, but he will have to make deals with dozens of other countries around the world.

Chief among them will be the U.S.

So far, President Donald Trump has spoken positively about his hopes of getting a trade deal with the U.K. done this year. But in recent weeks, a number of hurdles have appeared. London has continued to insist on imposing a unilateral digital services tax that would hit Silicon Valley’s biggest companies, even though the U.S. has warned about retaliatory tariffs on British-made cars.

The U.K.’s decision this week to allow Huawei to build part of its next-generation 5G network has also angered Washington. The White House believes Huawei could provide the Chinese government with backdoor access to the networks and potentially threaten national security.

Some U.S. lawmakers have suggested the deal could limit intelligence the U.S. shares with the U.K. — and even undermine any future trade deal.

Cover image: A Brexit supporter demonstrates in Parliament Square in London, Friday, Jan. 31, 2020. Britain officially leaves the European Union on Friday after a debilitating political period that has bitterly divided the nation since the 2016 Brexit referendum. (AP Photo/Alastair Grant) 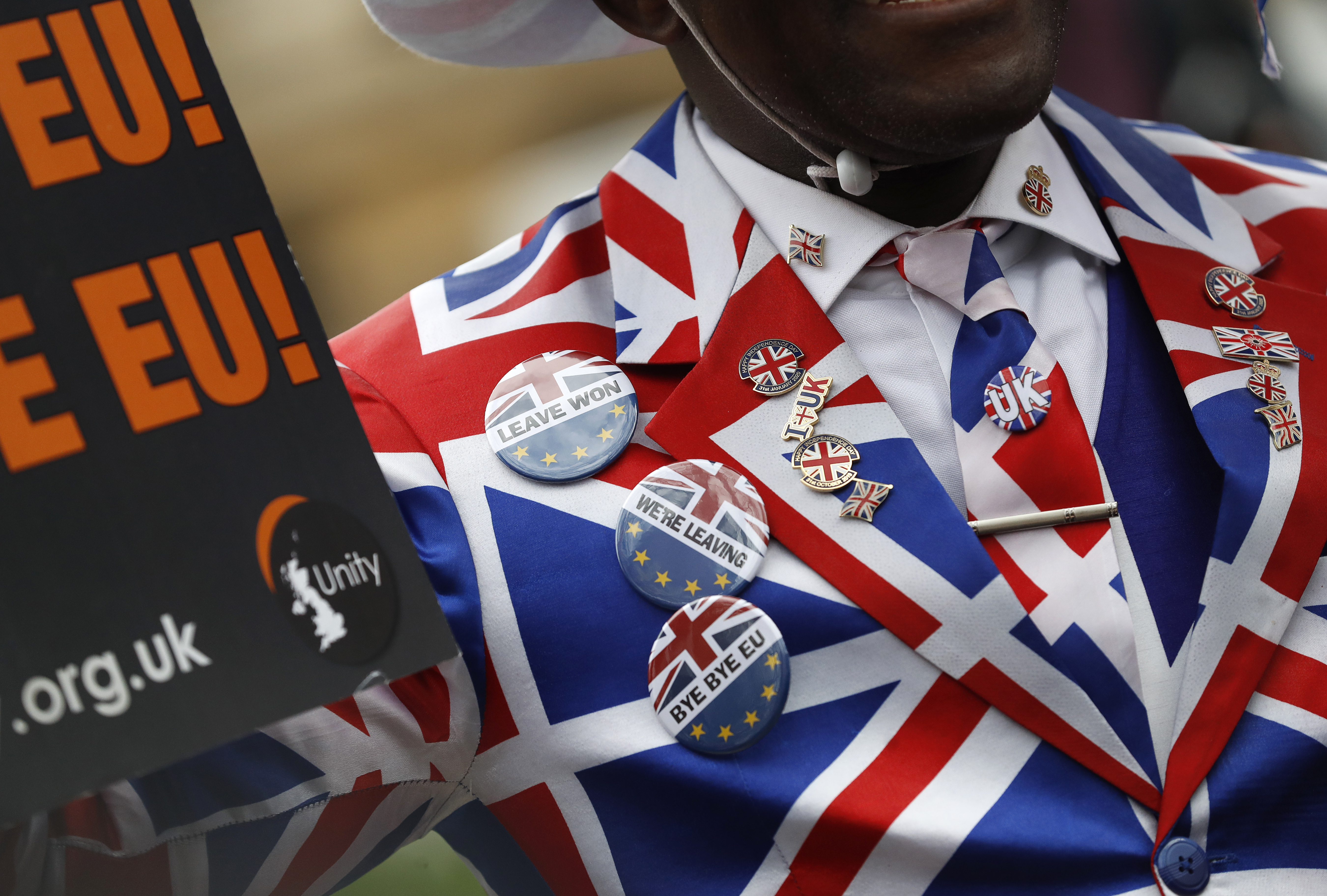