DES MOINES — Hours before President Donald Trump took the stage at a campaign rally here Thursday night, hundreds of people, including dozens of pre-credentialed journalists, were locked out. The fire marshal had declared the 7,000-plus venue at capacity.

Near the locked press entrance, one woman pressed her face and pounded her fists on the glass door, begging cops inside or journalists outside to get her in.

“I came all the way from Colombia,” she said, in a thick accent.

Trump’s rally at Drake University was only the beginning of the campaign’s show of force that will swarm Iowa this pre-caucus weekend. His supporters transformed the campus, usually dotted with the blue-and-white school colors, into a deep-red MAGAville for the night.

“It’s a little hot in this room! This room wasn’t designed for this many people,” Trump told the crowd inside Drake’s Knapp Center.

The evening hinted about just what they’re up against: Democratic primary competitors crow about filling a room with 700; Trump draws 7,000. Sen. Bernie Sanders topped the Democratic primary field in fundraising last quarter with a $34.5 million haul, but Trump easily raised $46 million. While about a dozen candidates battle it out for the future of the Democratic Party, the GOP knows exactly where it’s going: wherever Trump says.

“Look, you know, I could make this speech really short. All I have to do is say, ‘Uh, hello, Iowa. You have no choice but to vote for me. Otherwise, everything you have loved in your entire life will be gone. Goodbye, Iowa. Have a good time,’” Trump said on stage “Instead, I work my ass off up here.”

Many would-be rally attendees left rather than stand in the freezing overnight temperatures, but a crowd of shivering supporters bundled up in freshly bought MAGA beanies and scarves and stuck it out. They ate up every word, as they watched the president speak on a Jumbotron with crackling audio.

Becky Borrett, a 66-year-old retired school teacher, didn’t mind being outside one bit. She’d traveled in from Cedar Rapids to visit her daughter and see the president. Knowing she wouldn’t get in, she donned a thick Trump 2020 beanie to cover her chemotherapy-ravaged hair and stood outside to take in the spectacle.

In addition to agreeing with the president’s stances on abortion, guns, and immigration, she said her experiences in and out of the hospital battling cancer through 10 years and four rounds of chemotherapy made her receptive to his message on health care — and skeptical of Democrats promising free care for everyone.

“He wants people to be able to keep their own health care if they like it — and I do — and we worked hard all our lives for it,” she continued.

Minutes later, Trump, whose administration has a lawsuit pending until after the election that could invalidate Obamacare, made a similar pitch. Despite the fact that congressional Republicans have been trying and failing to pass their own health care bill for more than a decade, he told the crowd that if they deliver the House to the GOP, they’ll succeed.

Back outside, a few dozen protesters yelled slogans like “Fuck Trump” and “Hey hey, ho ho, Donald Trump has got to go.” A young woman who identified herself as a Native American held a homemade sign reading “No Fascist KKK.”

A man wearing two MAGA hats, one backwards, wagged his finger in her face and told her to Google Dinesh D’Souza, saying his movies would explain that Democrats are the real Ku Klux Klan. Another man yelled from across a metal barricade that Andrew Yang’s freedom dividend proposal is “a lot more close to socialism and Naziism than what this guy is talking about,” as he gestured toward the Jumbotron. 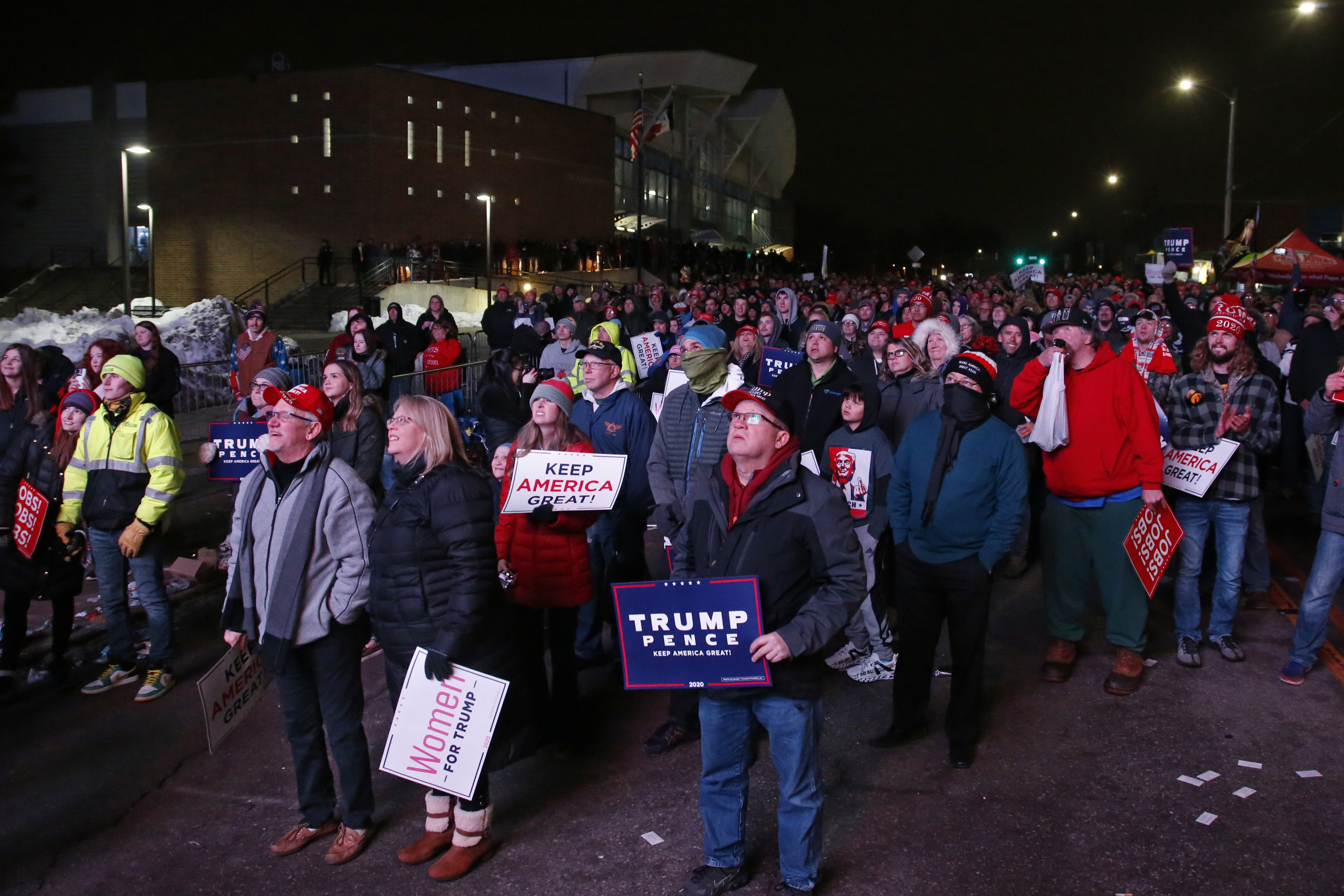 If it’s not already evident to the Democratic candidates that Trump will be hard to beat, it will be after this weekend: His campaign is well funded, well staffed, and completely ruthless. During the caucuses, they’ll have more than 80 surrogates on the ground pitching Trump, including Vice President Mike Pence, Cabinet officials, members of Congress, and current and former administration staff.

Trump campaign spokeswoman Ali Pardo said the team is ready to take on “whichever socialist the Democrats put up.”

“The Democrat nominee will be broke, running on a big-government socialist platform, and lacking the operation they need to win,” she told VICE News. “That’s not going to be a recipe for success in states like Michigan, Ohio, Pennsylvania, and Wisconsin.”

The campaign show of force clearly has another target, though: any opposition that might be brewing within the Republican Party, as ineffectual as that opposition may be.

Former Illinois Rep. Joe Walsh and former New Hampshire Gov. Bill Weld are running quixotic GOP primary bids to oppose Trump, but even a few-percentage-point ding to Trump’s iron grip on the party could look bad for Trump, who often boasts of a GOP approval rating upwards of 90% (a false claim, as the approval rating is actually somewhere in the 80s).

Lara Trump, the president’s daughter-in-law and campaign adviser, explained that they’re not aiming for just a victory, but for an overwhelming one.

“It is imperative that we only select the top supporters of President Donald J. Trump for this honor” to prove overwhelming support for the president, she said of the delegate selection process in a web video explaining the caucus system.

While Iowa went for Trump in the general election by about 10 points in 2016, the state supported President Barack Obama in 2008 and 2012. People outside the rally said they believe Trump will run away with the state again this year.

Dave Knutson, 64, of New Hampton, Iowa, drove three hours to catch the beginning of Trump’s rally but had to leave early to get home to work at the trucking company he owns. He said he likes Trump’s brashness, which reminds him of an old way of life when people weren’t so politically correct. Friends who used to be Democrats feel the same, he said.

“I’ve got people that have been dyed-in-the-wool Democrats that are going, like, ‘No, we can’t; it comes to a point where you gotta say no,’” he said. “He’s not a politician; he’s the first one that comes out and does what he says instead of blowing smoke up your ass.” 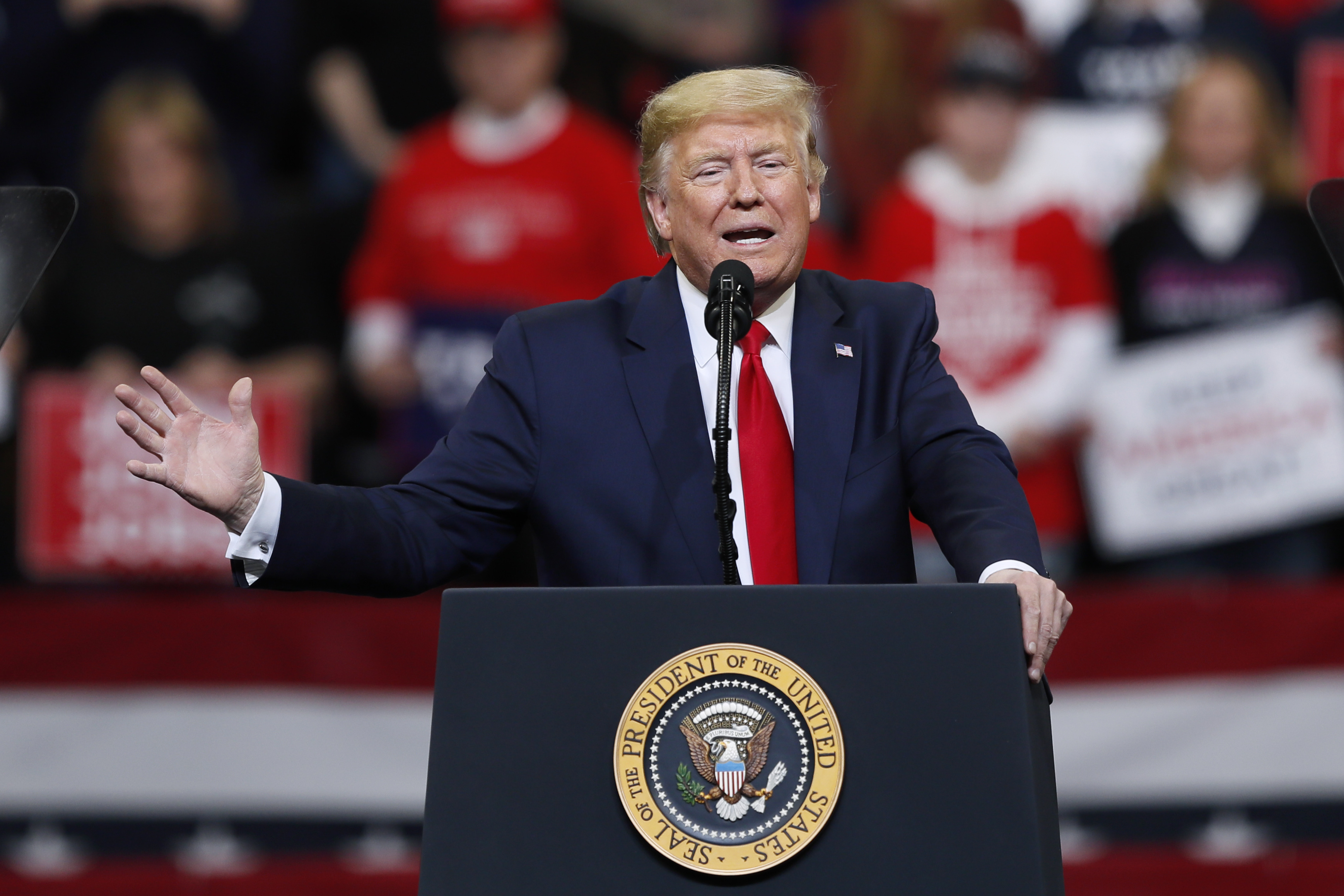 Parents in Japan and Hong Kong struggle as schools shut