Nearly a full day after the Iowa caucuses, the results still aren’t in and the state’s Democratic Party says it might be another day before we find out who definitively won. As they scramble to clean up the botched mess of the all-important 2020 primary kickoff, there’s plenty of blame to go around.

Several people who were at the caucuses told VICE News that the precinct chairs, the officials responsible for reporting results, struggled to get the vote tallies to the state’s Democratic Party, which is responsible for tallying up the results and declaring a winner in the first state primary contest leading up to November’s presidential election.

They tried to use a phone app to submit the votes; it didn’t work. They called the state hotline; they were put on hold. Within hours of the caucuses wrapping up, it was clear that things were going wrong.

Eventually, some precinct captains drove the paper ballots to party offices themselves. And some just gave up and went home.

“There’s a paper trail,” said Katarina Keating, 21, a precinct captain for Sen. Bernie Sanders from Vermont. “I don’t understand why they can’t use it.”

At the caucus in Donahue, Iowa, Denny Miller, another Bernie precinct captain, said the caucus itself went off without a hitch. Iowans in the tiny town of less than 400 people lined up according to the candidates they supported. The final result was decided by coin toss to break a tie between Joe Biden and Pete Buttigieg, as is customary, and Buttigieg won.

But when the precinct chair, the party representative responsible for reporting the results, called the party’s hotline to let them know the results, she couldn’t get through.

There were signs of trouble before the caucuses started: At the training where volunteers learned how to use the app that’s been blamed for much of the caucus chaos, many of the volunteers were retirees who weren’t comfortable using technology. They were told that if they didn’t want to use the app, they could just phone in results via hotline.

The app itself wasn’t exactly user-friendly. In order to use it, volunteers had to submit to their info for a vetting process to get access to the app. That would usually take three to four days, Elesha Gayman, chair of the Scott County Democratic Party, told VICE News. Then, they’d get an encrypted link to download the app: It wasn’t available in any app store. And then, once they finally got access to it, they’d need to enter in two PIN numbers to use it.

“What I believe happened is that people were people in the wrong PIN in the wrong place,” Gayman said. “It’s such a secure system that you automatically get locked out. It’s not something where you can hit password reset or something like that — you’re just done.”

The app, developed by a company called Shadow Inc., which itself is owned by a progressive non-profit organization called ACRONYM, was developed as an easier way to conform with new, more stringent reporting rules in Iowa this year.

And as the app failed, the phone lines were flooded.

Miller said that his precinct chair, who declined to talk to VICE News, was on hold for the 20 minutes while she drove the paper ballots to the party offices in Davenport. She left them there. (Gayman confirmed this account.)

Staff in Gayman’s office were up until 3 a.m. sorting paper ballots. A state Democratic Party staffer was tasked with driving three hours out to her office in Davenport to pick up the ballots on Tuesday.

The next morning, the precinct captain told Miller that she got a call from a representative with the national Democratic Party. She explained what happened.

Keating said some of the precinct chairs didn’t even know there was an app that they were supposed to use to report results. “I saw my precinct chair on the phone, but I don’t know what he was doing,” she said.

Shawn Sebastian, who was trying to report results from Story County, took a call from CNN’s Wolf Blitzer while he was on hold with the hotline. While he was on the air, he was taken off hold — but before he had a chance to report his results, the hotline hung up on him.

For Sanders supporters, the delay in releasing results has been the source of frustration. Per the campaign’s own results, Bernie won. The precinct captains that represented the Vermont senator at the caucuses Monday night feel like he was robbed of a moment he could’ve used to advance his campaign and build momentum going into New Hampshire Friday. Whatever results come out now, they’re not convinced everyone will buy them.

“You can’t erase people’s memories of what happened. No matter what happens, people are going to think, ‘We have to take this with a grain of salt,’ Keating said. “I don’t think it’s possible to salvage it.”

The app, for its part, has apologized.

Some worry that the Democratic Party could be deliberately working to undermine the Sanders campaign.

“I just don’t understand how they have a final total yet. I just don’t get it,” Miller said. “It’s one of two things: It’s either gross incompetence or it was deliberate. Either one is not good.”

Gayman stressed that, though it might take some time to get the results tallied up, they have a reliable paper trail and the results that are eventually reported should be trusted.

“I’m not going to release the results,” Gayman said. “But I will tell you, the Sanders people will be pleased with the outcome here.”

Cover: Caucusgoers seated in the section for Democratic presidential candidate former Vice President Joe Biden hold up their first votes as they are counted at the Knapp Center on the Drake University campus in Des Moines, Iowa, Monday, Feb. 3, 2020. (AP Photo/Gene J. Puskar) 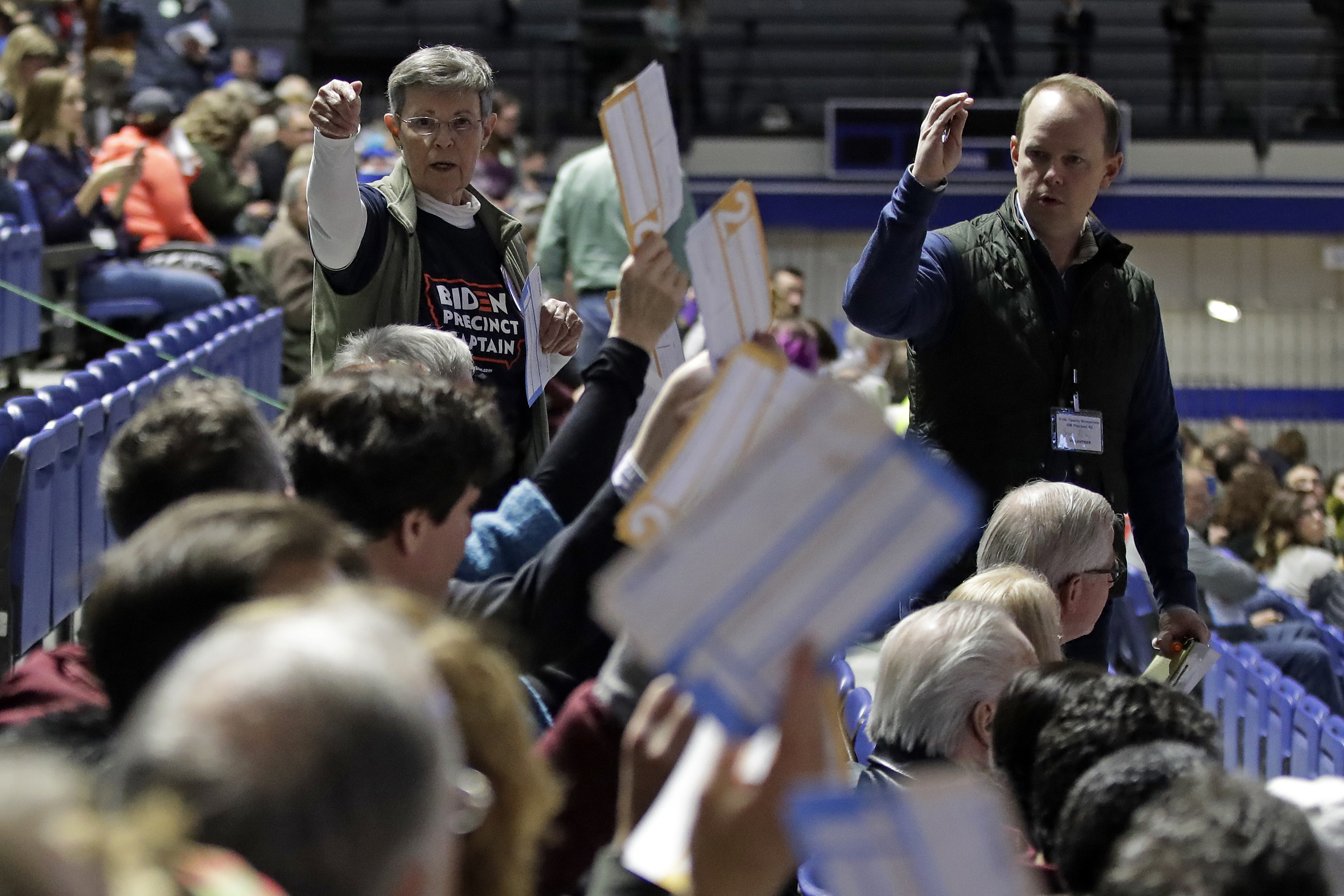