President Donald Trump worked a crowd of border patrol agents on Friday, touting all that he’d done for them during his term. And the crowd, the members of the National Border Patrol Council, a union that represents Border Patrol agents, ate it up.

He took the stage to chants of “four more years!” and was applauded for mentioning how much he’d done for border patrol agents. His aides handed out Trump’s signature red “Keep America Great” hats to the crowd as he spoke.

“In my State of the Union address, I shared the story of Maria Fuertes, the 92-year-old great-grandmother who was allegedly raped, beaten, and murdered by a criminal illegal alien in New York City,” Trump read from his prepared remarks. Then he went off-script.

“I’ll take the word ‘allegedly’ out, do you mind if I do that?” he said. “The lawyers put it in. If you don’t mind I’ll take it out. She was raped, beaten, and murdered.”

The person charged with Fuertes murder has not been convicted. 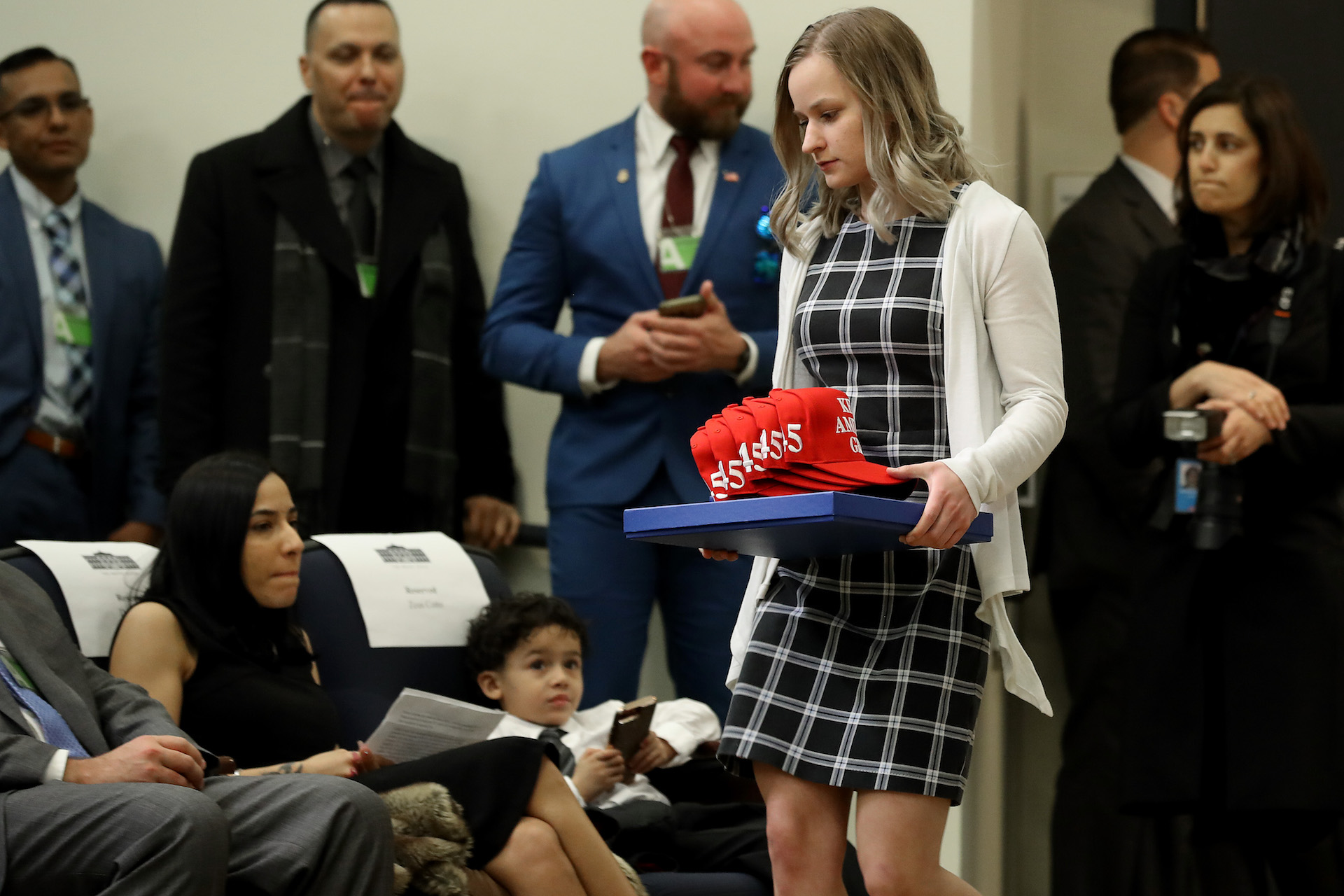 A stack of “Keep America Great” hats is carried out before U.S. President Donald Trump speaks to members of the National Border Patrol Council in the South Court Auditorium in the Eisenhower Executive Office Building February 14, 2020 in Washington, DC. (Photo by Chip Somodevilla/Getty Images)

Trump also held up pictures of different sections of the wall and bragged about the advanced engineering that’s gone into its construction. The wall’s got anti-climbing tech, which he said has led to firefighters having to pull people off the wall who attempt to climb it and get stuck.

It’s see-through, because near sections of the wall that were opaque, the president said that Border Patrol agents were literally getting hit over the head when traffickers were launching their 150-pound bags of drugs over the wall with catapults.

He’d wanted an imposing concrete wall, but the drug-projectiles are what convinced him it had to be see-through. “As soon as they said that, that was the thing that got me. I said, ‘You’re right, you gotta be able to see what’s on the other side,’” the president said.

The wall’s even got some high-tech black paint to heat it up and make it more difficult to climb.

“We’re going to spray paint it black,” he said. “The black makes it extraordinarily hot, especially in areas along the Mexican border. It’s not known for cold weather, it’s known for quite hot weather. You don’t have too much snow in this area, right.”

“In fact, if you had any, that would be called climate change, right?” he added, to laughter from the crowd. “When they do that, I’m there, I’m a believer.”

He also touted Republican-introduced legislation that would allow victims of crimes perpetrated by undocumented immigrants to sue sanctuary cities for damages.

And as Trump was on stage Friday, the New York Times reported that the agency would be moving specially trained forces away from the border to sanctuary cities.

In cities like Chicago and New York, those agents will crackdown on illegal immigration inside the country, rather than at the border. 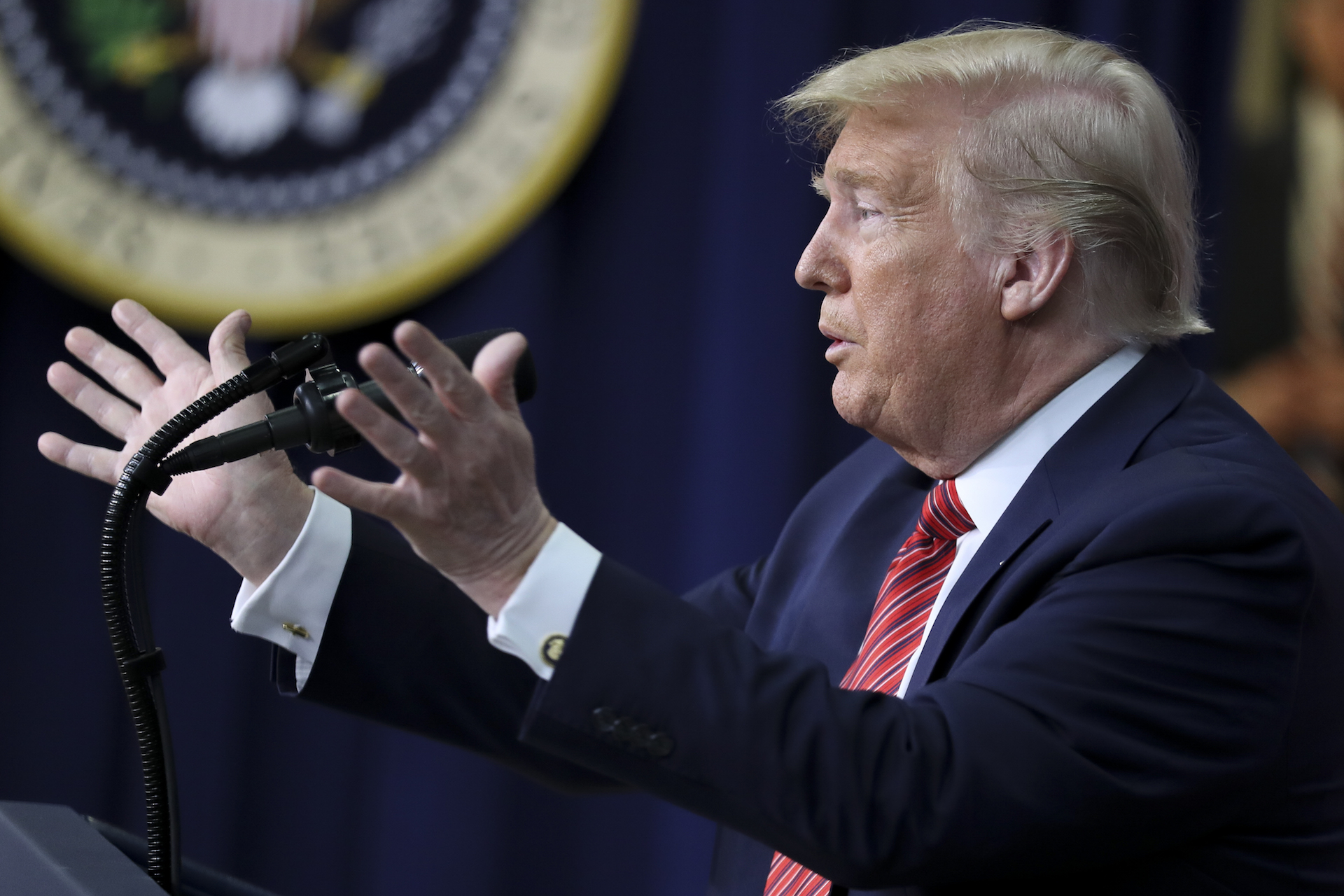 QAnon Is Running the Pizzagate Playbook With Hunter Biden