The foreign fighters, who flocked to northern Syria from more than 50 countries to fight for the Islamic State, have largely been blocked from returning to their countries of origin since the defeat of ISIS in March 2019, and have been held in prisons by Kurdish forces ever since.

Former ISIS fighters are being held in prisons and camps across Rojava, a Kurdish-held autonomous region in northern Syria. Majority Kurdish Syrian Democratic Forces or SDF were instrumental in defeating ISIS in Syria, fighting and training alongside the U.S.-led coalition. But after President Trump announced the withdrawal of 1,500 U.S. troops from the area in October, anti-ISIS operations by the U.S. has slowed down leaving the SDF to largely shoulder the burden of both foreign prisoners and security.

Abdul Karim Omar, co-chair of the Foreign Relations Commission in North Syria, told VICE that trials of the men and women held in the camps will be conducted in conjunction with their countries of origin.

“In the beginning we requested from the international community that each state take back their respective citizens, to put them through their own courts,” Omar told VICE News. “Regrettably, these calls fell on deaf ears.”

Many of the countries they originate from have refused to repatriate the fighters, leaving the suspects to languish in squalid and cramped conditions. The hope is to conduct these trials in partnership with origin countries, which include France, Belgium, the United States, and Norway.

“The court we want to establish is one we wish to be special; an international one between ourselves and the countries these [ISIS members] belong to, to try them here, but in cooperation,” Omar said.

Local Syrian authorities initially lobbied for ISIS prisoners to be tried by an international tribunal but the move was rejected due to a lack of approval from the United Nations Security Council.

Omar explained that the final details of how the courts will work still need to be hammered out but the process will include local Syrian judges who will collaborate with legal representatives from other countries:

“We’re talking to each country individually. We can’t do it alone … it’ll take years because the numbers are huge,” Omar said.

The SDF say they are under resourced and struggling to maintain the security in region, a concern reiterated by Omar who told VICE that ISIS remains a threat both locally and internationally.

The fear is that ISIS could reconstitute and liberate the prisons. Prison guards told VICE that they fear ISIS sleeper cells could target the prisons in order to free the suspects.

“It’s possible that Isis might renew itself, organize itself and regain territory,” Omar said. “That’s why we need to carry out this struggle together.”

There have been numerous unsuccessful attempts by prisoners to break out of the cells and women have been smuggled out of the camps.

In October, after Trump announced the withdrawal of American troops from the border with Turkey, President Tayep Erdogan ordered an incursion that pushed the SDF deeper into Syria.

This has threatened the fragile balance the SDF has been struggling to maintain since the battle against the terrorist group ended. Following the incursion, the number of attacks claimed by ISIS sleeper cells in the region increased, according to Rojava Information Center.

It’s hoped that establishing a court system will ease the burden faced by Kurdish forces as convictions would help speed up the process of relocating the prisoners.

Unlike neighbouring Iraq, ISIS fighters who are convicted do not face the death penalty in the Kurdish controlled region.

Cover: Men accused of being affiliated with the Islamic State group sit on the floor in a prison in the northeastern Syrian city of Hasakeh on October 26, 2019. Kurdish sources say around 12,000 IS fighters including Syrians, Iraqis as well as foreigners from 54 countries are being held in Kurdish-run prisons in northern Syria. (Photo: FADEL SENNA/AFP via Getty Images) 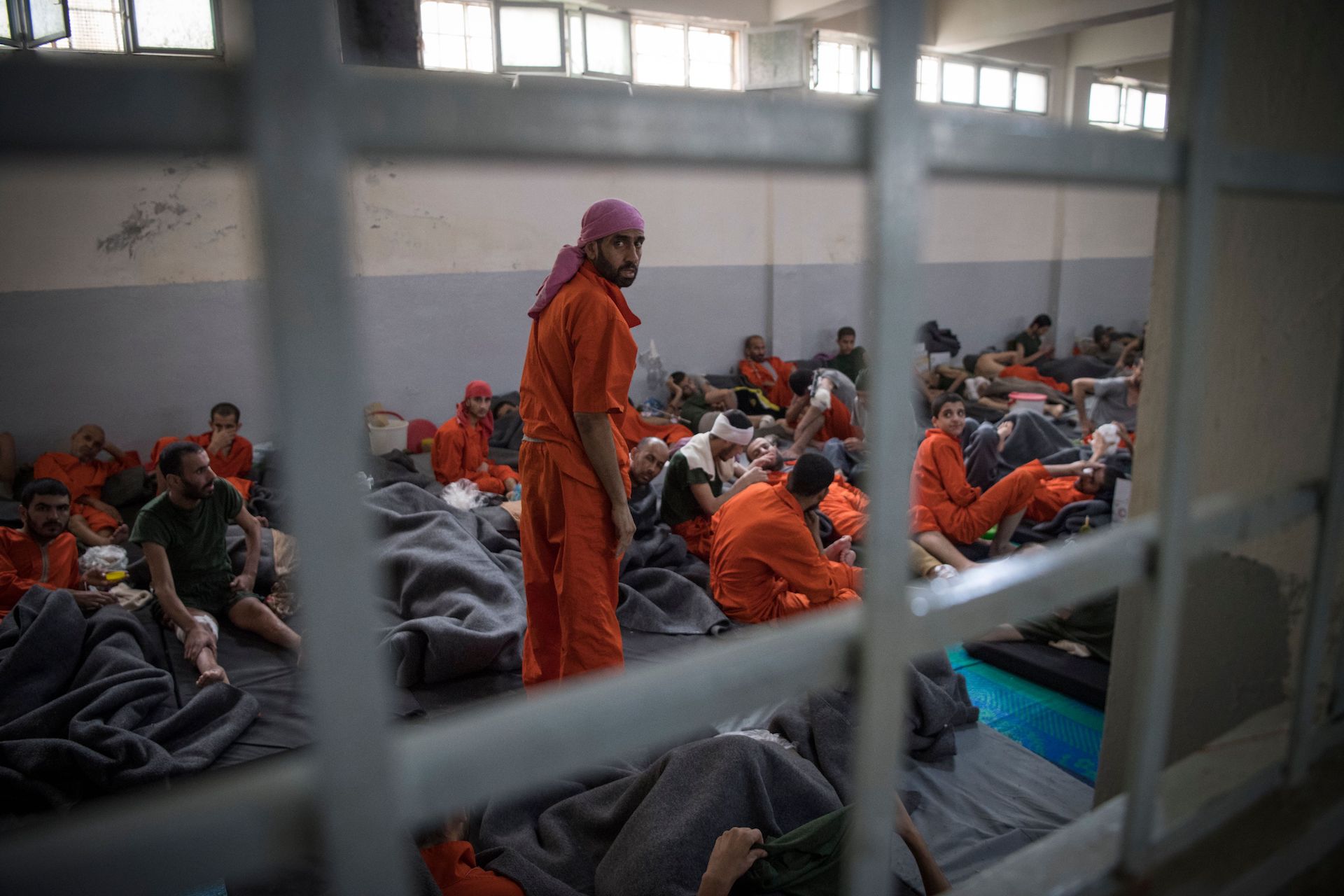 A Lot Happened in the Ahmaud Arbery Case Over the Weekend