As Prime Minister Narendra Modi rolled out the red carpet for Donald Trump’s first state visit Monday, the streets of the capital New Delhi were burning over a controversial new law that could reshape the country’s identity.

Clashes broke out in neighborhoods in the northeast of the city between pro-government nationalist groups and opponents of the law, which gives a fast track to citizenship for illegal immigrants from three neighboring Muslim-majority countries — Afghanistan, Pakistan, and Bangladesh — as long as they aren’t Muslim.

Three people were killed, including a police officer, homes and markets were torched, and police imposed emergency measures to restore law and order as mobs assaulted their rivals.

Videos circulating on social media showed homes and shops burning, and mobs pelting each other with stones, and a man firing a handgun as he approached police officers trying to intervene.

It’s the latest violence over the religious-based Citizenship Amendment Act, which has sparked sporadic protests since it was passed in December.

According to local media, the seeds of the latest flare-up were sown on Sunday, when Kapil Mishra, a minister representing the BJP in Delhi’s government, led a pro-citizenship law march through a neighborhood where opponents were holding a sit-in against the legislation. In a video he tweeted, Mishra delivered an ultimatum to a police officer, saying that his group would remain quiet during the Trump visit, but after that, would not obey the police if they failed to clear the area of protesters. The first clashes broke out shortly afterwards, and escalated Monday.

The violence brought widespread condemnation and appeals for calm across the city. Rahul Gandhi, leader of the opposition Congress party, tweeted that he “unequivocally condemned” the violence. “Peaceful protests are a sign of a healthy democracy, but violence can never be justified.”

G. Kishan Reddy, the BJP’s Minister of State for Home Affairs, said he believed the violence had been “orchestrated with an eye on” Trump’s visit. He said additional forces had been deployed to the capital to deal with the unrest.

Gareth Price, senior research fellow at the Chatham House international affairs think tank, told VICE News that violence had “never been far away” in the protests which have gripped the capital in recent months.

But the recent flareup — the first time a member of the security forces has been killed in the unrest — potentially marked an ugly turn. He said the fact that the clashes were not just between protesters and police, but between rival groups who were for and against the law, suggested “this could go down a pretty dark path.”

“The fact a few people have died today does seem to take this to a higher level,” he said.

Trump’s whistlestop tour across the subcontinent Monday, including a speech before 100,000 people at a “Namaste Trump” rally, promises to boost trade and fight terrorism, and a visit to the Taj Mahal, where he shook hands with Yogi Adityanath, a hard-line Hindu monk and politician known for his anti-Muslim rhetoric.

Trump made no public comments about the unrest shaking Delhi or the citizenship law debate, although in a briefing to reporters last week, a senior Trump administration official said the president would raise the issue of religious freedom in his talks with Modi.

READ: Facebook has become a “megaphone for hate” against Muslims in India

Price said that at the heart of the current clashes were competing and irreconcilable differences over India’s identity: the model, which prevailed since independence, of India as a home for multiple faiths, versus the BJP’s vision of India as primarily a Hindu nation.

And with many fearing that the citizenship law was only one step in a campaign to remake India in keeping with the BJP’s Hindu nationalist vision, tensions over the issue were only likely to escalate.

“Where it ends is a work in progress, I would suggest,” he said.

Cover: Pushcarts belonging to street vendors go up in flames after clashes between two groups in New Delhi, India, Monday, Feb. 24, 2020. Indian paramilitary troops used tear gas and smoke grenades to disperse a crowd of clashing protesters in New Delhi on Monday as violence broke out over a new citizenship law just ahead of U.S. President Donald Trumpâ€™s visit to the city. (AP Photo/Dinesh Joshi) 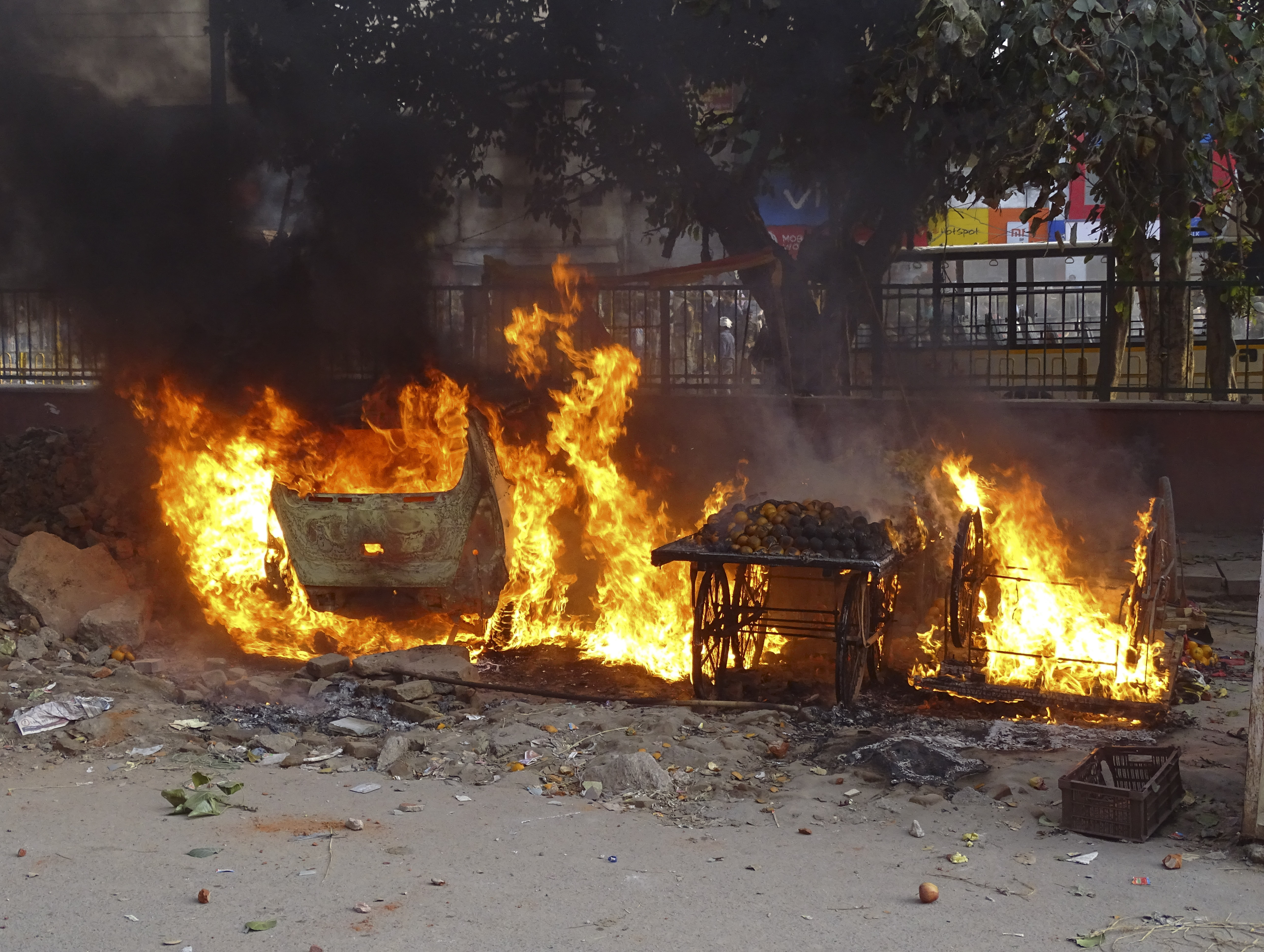 Sacha Baron Cohen Thanks Giuliani in Golden Globes Speech: ‘Who Could Get More Laughs After One Unzipping?’