SEOUL — I’d expected to see masks in South Korea, but I wasn’t prepared for the strange social dance of complimentary hand sanitizer.

It’s everywhere now, often in big, Costco-sized pump bottles, offered as an ad-hoc public service. In bathrooms, at the register at coffee shops, the front desk in hotels. Always displayed in such a way that feels both inviting and accusing — when’s the last time you washed your hands? So you take a couple conspicuous squirts so that everyone can see that you’re taking your safety, but more importantly their safety, seriously.

After a while, you start to develop a connoisseur’s nose for the stuff. Or you develop a gag reflex: mine gets set off just by looking at the Purell my coworker brought from the States; it smells like gasoline and cheese. There’s a local Korean brand that makes my hands smell like citrus vodka, even after it evaporates. Another smells like berries but feels like maple syrup. Who knows which one is the most effective against coronavirus, or if any of them are.

The thing is, I had no plan of covering coronavirus. When my coworkers and I arrived in South Korea a few days ago, it was to film a couple segments for Vice News Tonight that had been set up months ago, reporting on something completely unrelated to coronavirus. But pretty soon, it was obvious that the disease, or at least the fear of it, was starting to seep into every facet of daily life.

READ: Here’s how China is hunting down its coronavirus critics

Our first story took us out to the countryside. We were supposed to be filming a large gathering of people, many of whom lived in Seoul and were making the trip out for a break from the hustle of the city. But when we arrived, we discovered that several people had canceled, because of coronavirus.

“A lot of people were afraid to come,” one of the organizers told me, through a translator. “Even though it’s probably a lot safer out here than in a crowded city like Seoul.” I nodded. He half-smiled at the irony.

Irony on top of irony, then, when we woke up the next morning to news that a new crop of coronavirus cases had been discovered not far away.

By the time we arrived in Seoul ourselves, it had gone from a concerning number of cases to a full blown outbreak. And while it never felt unsafe (infections were concentrated in Daegu, hours away), it occasionally felt uncomfortable. Sometimes it was lonely: eating in empty restaurant after empty restaurant, wondering if any other customers would come in.

Sometimes it was surreal: watching a violinist fidget his nose under a heavy-duty face mask as he played a gorgeous rendition of the theme song from “Charlie And the Chocolate Factory” in front of a crowd of bored businessmen.

Sometimes it was infuriating: watching my Chinese coworker (who lives in New York, and was nowhere near China when the outbreak happened) constantly being subjected to accusatory questions by xenophobic hotel clerks who were “just doing their job.”

READ: The coronavirus is starting to hit the U.S. military

But the most pervasive barometer of everyone’s anxiety was in our own pockets.

At one point, my crew and I were interviewing someone on camera, and we kept hearing the buzz of a phone notification. At first, we thought someone had forgotten to put their phone on silent, but then we realized everyone’s phones were buzzing at the same time. The government was pushing out mandatory health alerts about nearby outbreaks.

In contrast to China, which has been opaque about the spread of the disease within their borders, the Korean authorities have been startlingly open — almost too open — about coronavirus cases, even publishing information online about when and where infections were discovered, the ages and genders of the patients, and a host of other data.

Some private citizens have figured out a way to scrape that data and mash it into an interactive map application. You can open it up on your smartphone, and take a virtual tour around the country’s sickest spots. Swipe or pinch to scroll or zoom in on anywhere in Korea, tap a red dot to see the corresponding patient number, and date of infection. A cluster of red dots means a danger zone, so you can tell at a glance where you should avoid. It went viral immediately. It’s useful. It’s also addictive.

READ: Coronavirus is now a pandemic in all but name

I’ve noticed people idly swiping around the map during lulls in conversation, in the same way people unconsciously flick through Instagram when they’re bored. But instead of memes or puppy videos, they’re obsessively checking for updated corona victim data.

And that might be the most unsettling thing about an epidemic in the age of social media FOMO (Fear Of Missing Out): the crawling dread that if you look away from your phone for even a moment, you’ll end up dying because you missed an important message.

It occurred to me as I craned my neck, watching a Korean colleague scan through the latest batch of infection data on his phone, that whatever differences we may have, the cultures of the United States and South Korea are very much alike in one point: our addiction to high-speed information.

I started to wonder if too much data could make you sick.

When I first arrived at Incheon Airport only a few days ago, it was packed. Today, as I wait to board a plane out of the country, the same airport is a ghost town. In the main entrance, it almost looks like there might be more airline employees than passengers. I got through security in record time. There are no lines.

When I got into the airport lounge, a news recap of a soccer game was playing on a massive TV overhead. I understand very little Korean, but I started watching, trying to at least figure out who was playing.

I noticed a set of numbers in an on-screen graphic on the upper right of the screen, where you would expect the score to be. Something seemed off. There was no way either of these teams had scored 21 goals. I slowly sounded out the Korean letters on the screen, and realized these weren’t scores – they were names of different places in Korea, and the number was a corona infection tally.

Sure enough, after a few moments, a new region was displayed, with a new number. As the game footage played in slow motion, new numbers cycled across the screen. Seoul, 36. A player dribbles the ball down the field: Pusan, 38. An opponent slide tackles him from behind: North Gyeongsang, 248. The player collapses onto his neck: Daegu, 499.

At the very top was a running total of total cases in the country: 893 confirmed infected, 22 confirmed cured, 9 confirmed dead.

I’m sure that number has changed by now. But I’m afraid to check. 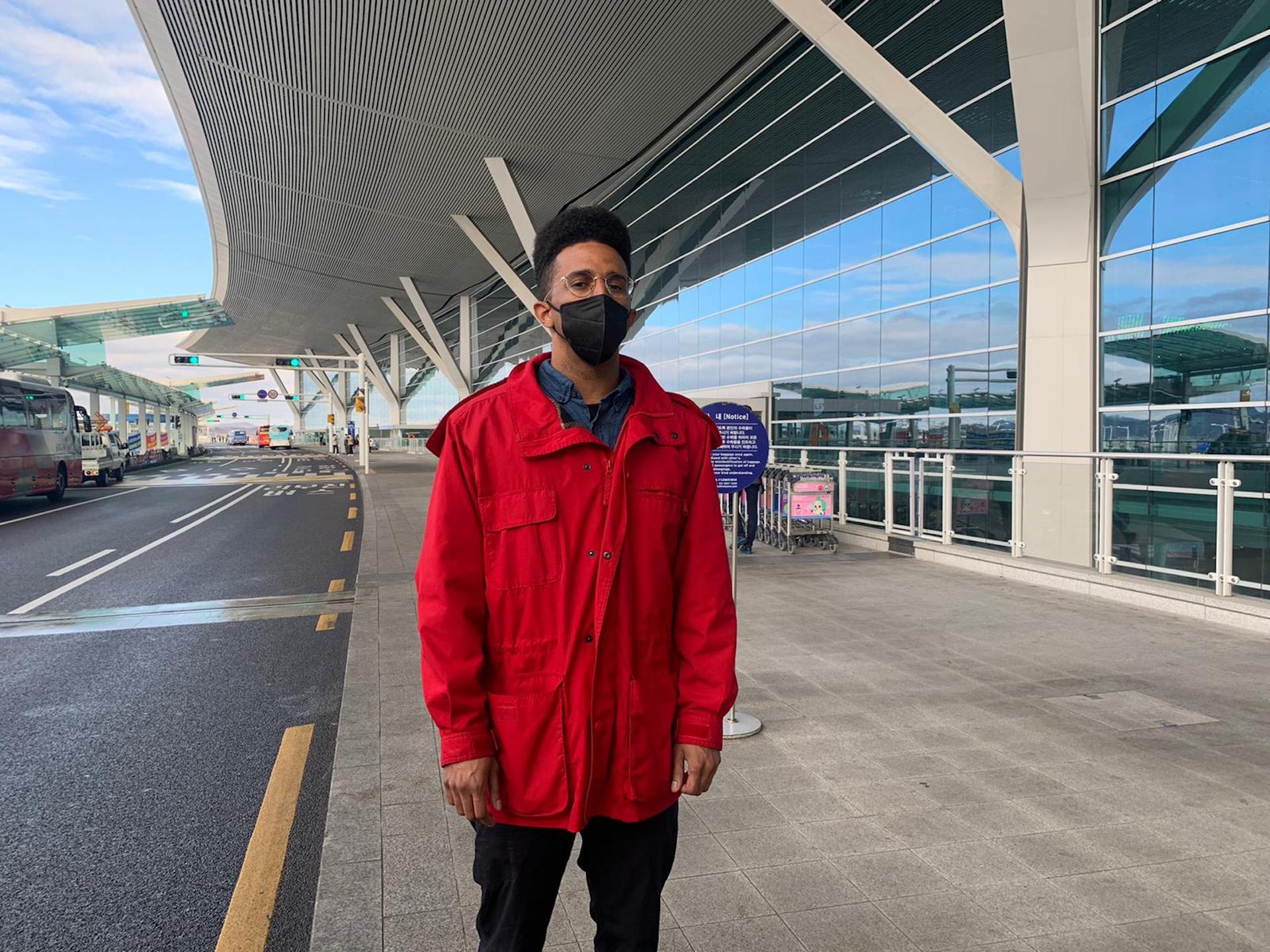