The followers of the QAnon conspiracy theory now have their very own super PAC.

Disarm the Deep State is a fund established by Jim Watkins, the operator of the hate-filled message board 8chan that the mysterious leader of the QAnon conspiracy theory has made his home.

The fund’s website says it’s the first super PAC “dedicated to removing shadow government actors” and that its mission is to “mobilize a community of patriots in order to remove power from Deep State members.”

The group did not immediately respond to questions about the fund’s activities, but according to the official Twitter account, Watkins, who lives in the Philippines, isn’t the only person involved in operating the super PAC.

Documents submitted to the Federal Election Commission last week show that Watkins is being helped by Benjamin Barr, an attorney who represented Watkins when he gave evidence to Congress last year and who is heavily involved in the right-wing Project Veritas group.

Barr did not respond to questions about his involvement.

The group says it won’t rely on donations from corporations or political parties and is calling on individual supporters to donate to the campaign. It is promising everything from “billboards to television ads” which will be “noticed by people across the nation, from all backgrounds, at every walk of life.”

“You will also be contributing to the development of intellectual ammunition to defeat Deep State operatives,” the site claims.

Having started life as a baseless conspiracy theory on fringe websites, the QAnon movement has been slowly moving from online to offline, gaining a foothold in the real world — boosted by President Donald Trump’s retweeting of QAnon accounts.

There are now dozens of congressional candidates in this year’s elections who openly support QAnon.

The fund has yet to say exactly how it will spend any money it has raised — or how much money it has available — but it has listed two dozen candidates it says it will support in upcoming primaries.

The list matches almost perfectly with one of QAnon supporting Congressional candidates compiled by the Media Matters, a nonprofit that tracks conservative media misinformation.

Among the candidates Disarm the Deep State says it will support is Joanne Wright, who is running in California’s 34th Congressional District in Los Angeles County, and last week was endorsed by the California Republican Party.

As well as being a self-professed QAnon follower, Wright has retweeted a claim that vaccines are “part of the satanic Deep State Agenda 21 for depopulation” and that Bill Gates funded a Wuhan lab where the coronavirus was man-made.

QAnon is a pro-Trump conspiracy theory about “deep state” traitors plotting against the president. The baseless but intricate theory appeared online just over two years ago and has since been embraced by thousands of people.

Among its many strands is the belief that Democrats are secretly torturing and killing children in underground lairs to extract life-extending chemicals from their blood.

READ: Inside the war to kill off 8chan — and crush QAnon

At the time, the conspiracy theory’s mysterious leader “Q” told his followers that his communications would never occur outside of 8chan and that the message board was the military’s chosen platform for leaking intel.

When 8chan went offline last August due to hosting providers pulling support for the site, QAnon supporters were cut adrift. However, when 8chan reemerged in November — renamed 8kun — “Q” quickly reappeared, which led some to question how closely linked Watkins was to the conspiracy theory.

Cover: Supporters of President Donald Trump hold up their phones with messages referring to the QAnon conspiracy theory at a campaign rally at Las Vegas Convention Center on February 21, 2020 in Las Vegas, Nevada. The upcoming Nevada Democratic presidential caucus will be held February 22. (Photo by Mario Tama/Getty Images) 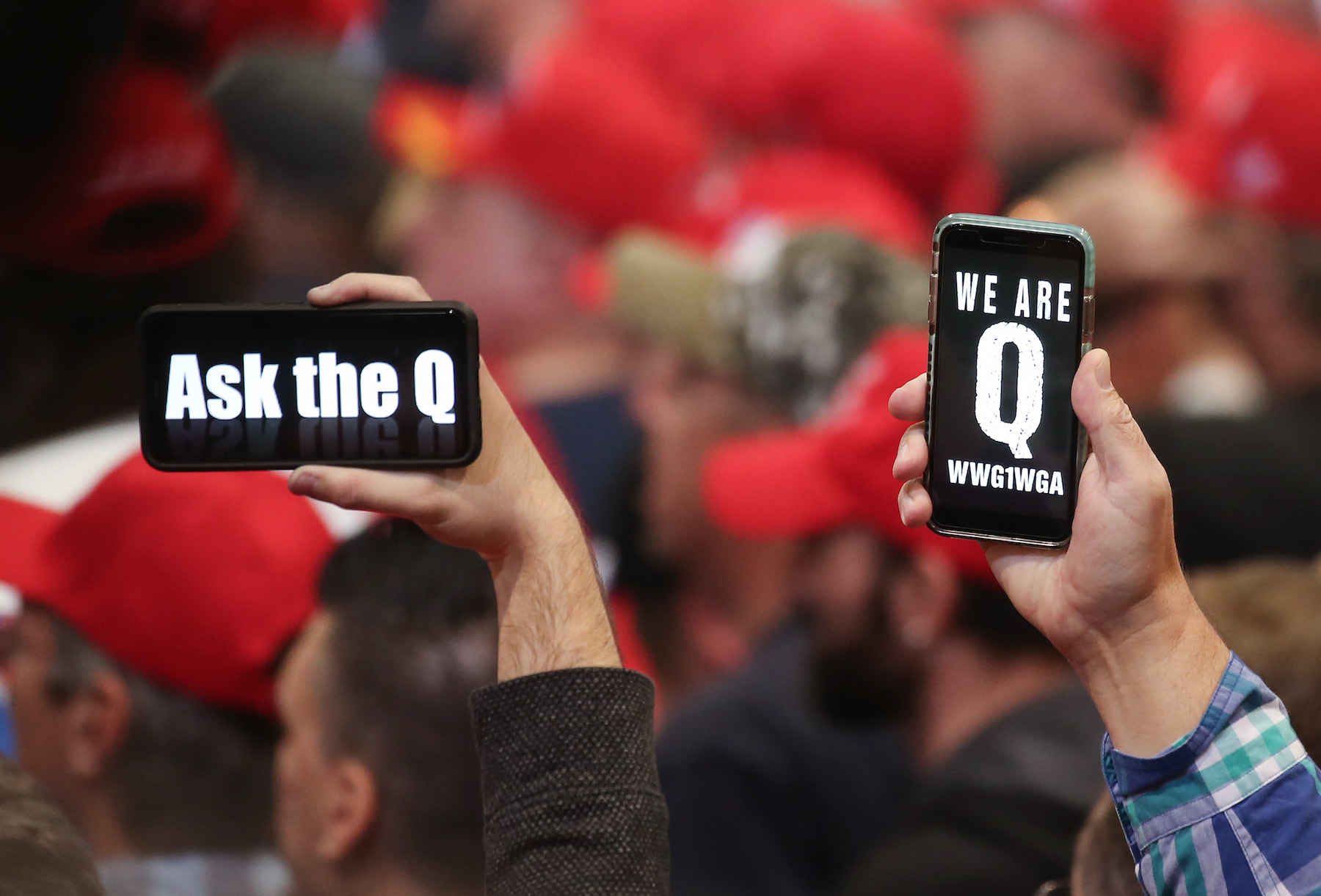 ‘Literally a Lifeline:’ Doctors Without Borders Is Getting Cell Phones to Homeless People so They Can Stay Connected During Coronavirus