Yachting if often associated with large, luxurious, professionally crewed motor or sailing yachts used for the pleasure of spending time on the ocean. Upscale Living magazine showcases the Top 3 most extraordinary superyachts, and they are so spectacular, you will want to drop anchor. 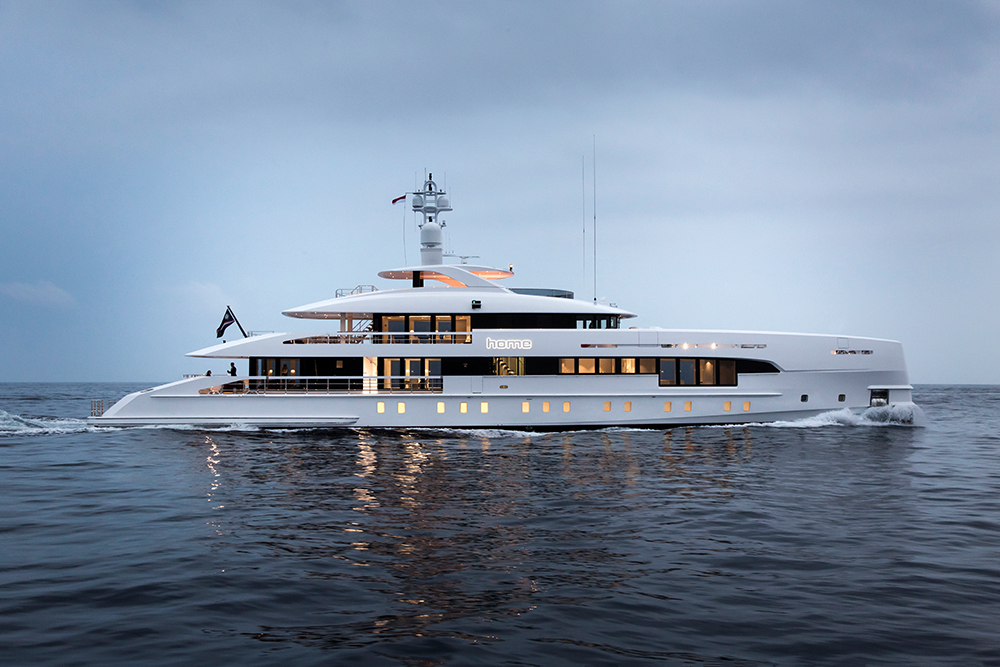 Heesen worked closely with sensory expert Professor Barry Smith, Founder of the Centre for the Study of the Senses and Director of the Institute of Philosophy, who found that many of the activities during an outing at sea involve enjoying good food and wine. In a recent study examining the effect a silent cruising mode would have on guests’ onboard, Smith concluded:

“Our research has shown that the brain’s processing of taste is affected by noise, which reduces the tongue’s ability to detect salt, sweet, and sour. The beauty of Home is the ability to run at a sound of around 46 decibels — the sound level of softly falling rain – enabling those on board to enjoy food and drink to the full, with no diminution of taste”.

Heesen continually strives to complement technology and design and believe that in a world full of noise, ‘silence is the ultimate luxury.’ The first of a new breed, Home, is quieter, cleaner, and more fuel-efficient. The Fast Displacement Hull Form offers fuel efficiency due to the use of lightweight aluminum, and the silent cruising mode can reach up to 9 knots. Propelled by a hybrid of both diesel mechanical and diesel electrical, her power sources can be used simultaneously or independently, reducing noise, vibration, and again increasing efficiency.

Beautiful as well as technical, Home’s striking exteriors, featuring a vertical bow, swim platform, and floor to ceiling glass windows, are designed by Frank Laupman of Omega Architects. Inside, her two-tone palette, with jewel-like burgundy details, is the vision of Interior Designer Cristiano Gatto, appointed by the Owner himself to create a linear design enriched by geometrical patterns and using precious materials, including rare Belgian marble. (PHOTOS DAVID CHURCHILL/HEESEN) 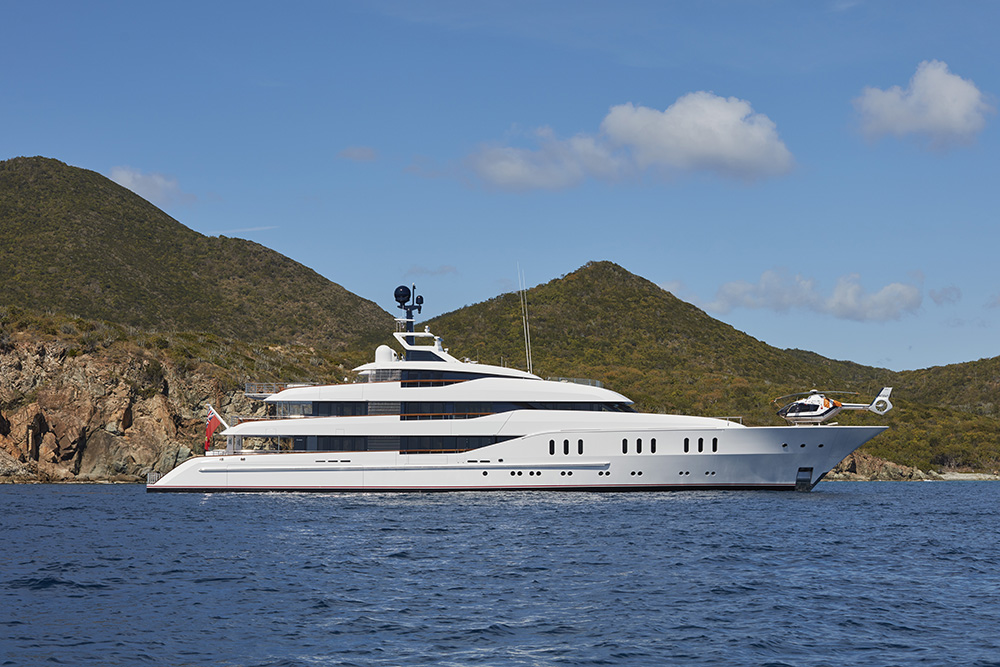 Founded by Directors Peder Eidsgaard, Ewa Eidsgaard, and Ben Harrison in 2005, Harrison Eidsgaard has quickly risen to become one of the most sought-after names in the superyacht design industry. With their varied backgrounds, the Directors have applied their different areas of expertise to form this dynamic trio.

Peter was born in Great Britain and grew up in Oslo, Norway. He gained a Bachelor of Science degree in design in Switzerland before starting his yacht design career in London in 1996. He decided on his chosen profession after reading about London’s superyacht designers in a magazine when he was 12 years old.

Eva was born in Poland and studied finance in Paris before joining Goldman Sachs in 1996, where she worked for nine years as a Vice President. She has always had a keen interest in design and photography, which she now incorporates into her interior decorating role. 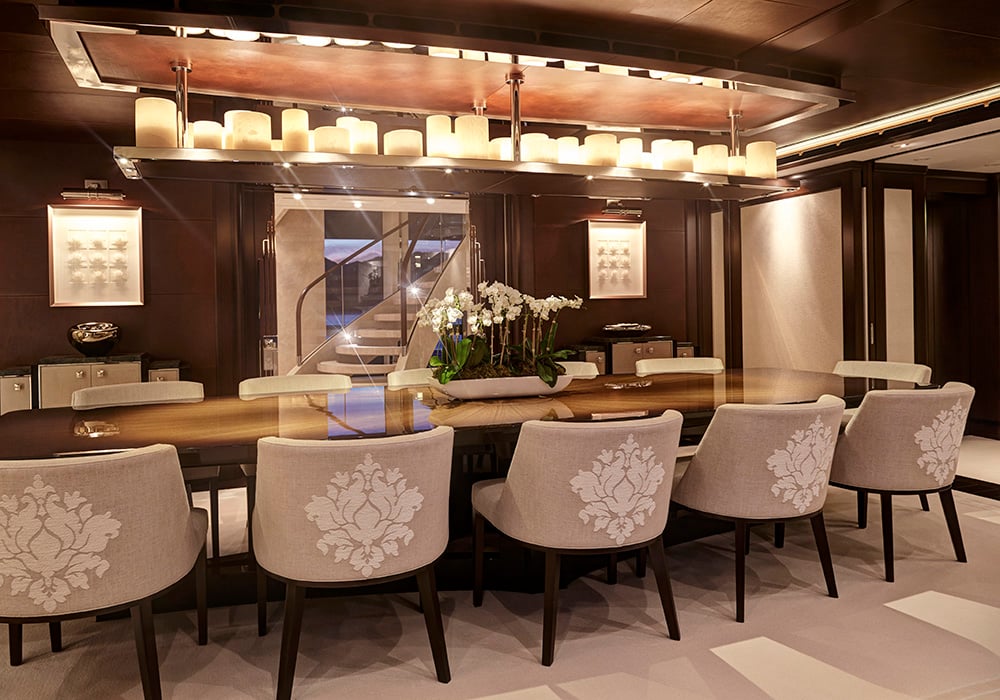 Ben was born in Great Britain and grew up on the river Dart in Devon. He studied architecture at Newcastle University before starting his yacht design career in London in 2000. Having sailed since the age of 5 and coming from architectural family background, Ben has combined these two passions in yacht design.

Having already notched up eight prestigious Neptunes at the World superyacht awards, their interior and exterior design in Yachting, Residential and Aviation are setting the benchmark for others to follow.

Based in London with a team of eleven, their philosophy is to remain small, and only take on the most prestigious projects, delivering to their clients a bespoke and turn-key service. Hand-sketching remains at the core of their business, with clients welcomed to sit with the team and dream.

Motor yacht ‘Vanish,’ like their other multi-award-winning projects, demonstrate the impeccably high standard of the design that accompanies a Harrison Eidsgaard project, with every detail, junction, and the material having been considered in every way. ‘Vanish’ is a collaboration between Harrison Eidsgaard and custom-yacht builder Feadship, creating a superyacht that is a lifestyle statement par excellence.  (PHOTOS HARRISON EIDSGAARD LONDON) 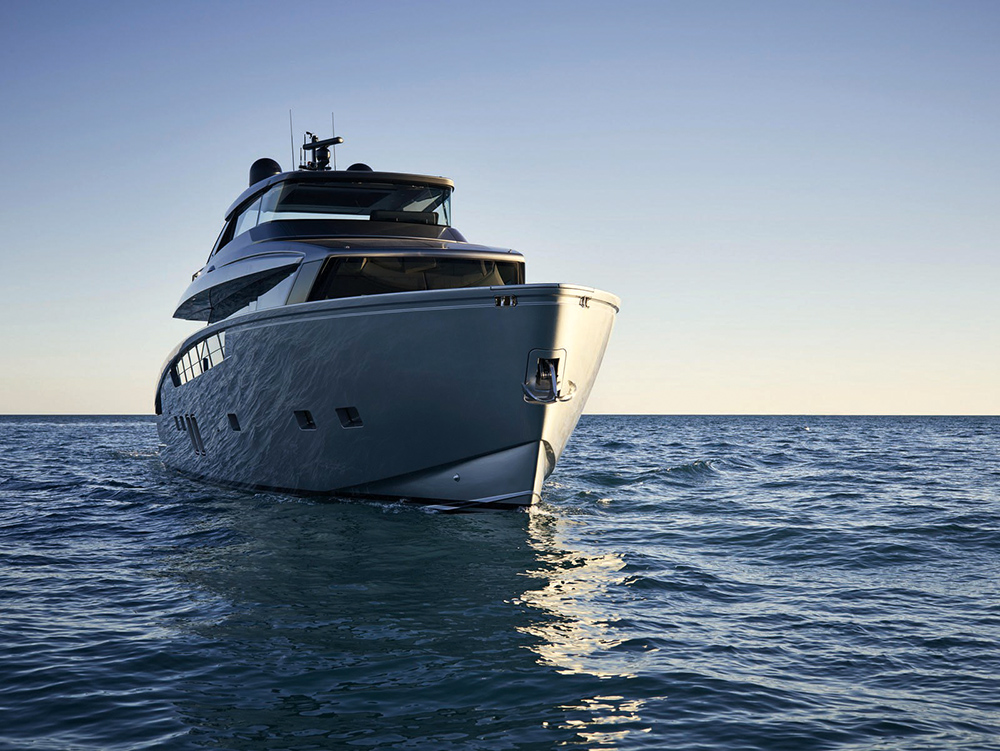 After the extraordinary success gained from the SX88 at the 2017 edition of the Cannes, Genoa, Düsseldorf and Miami Boats Shows, as evidenced by the sale of 13 units to date, of which three have already been launched, Sanlorenzo, officially presented the SX76 crossover yacht, designed by Lissoni & Partners, Piero Lissoni‘s international architecture and design practice.

A range of products that is characterized by unprecedented intelligent, rational and practical solutions and, as always, is marked by Sanlorenzo’s unmistakable style, based on moderation, a balancing of volumes and masses that maintain, in this latest addition, the characteristic elegance that has become an immediately recognizable signature style of the brand. 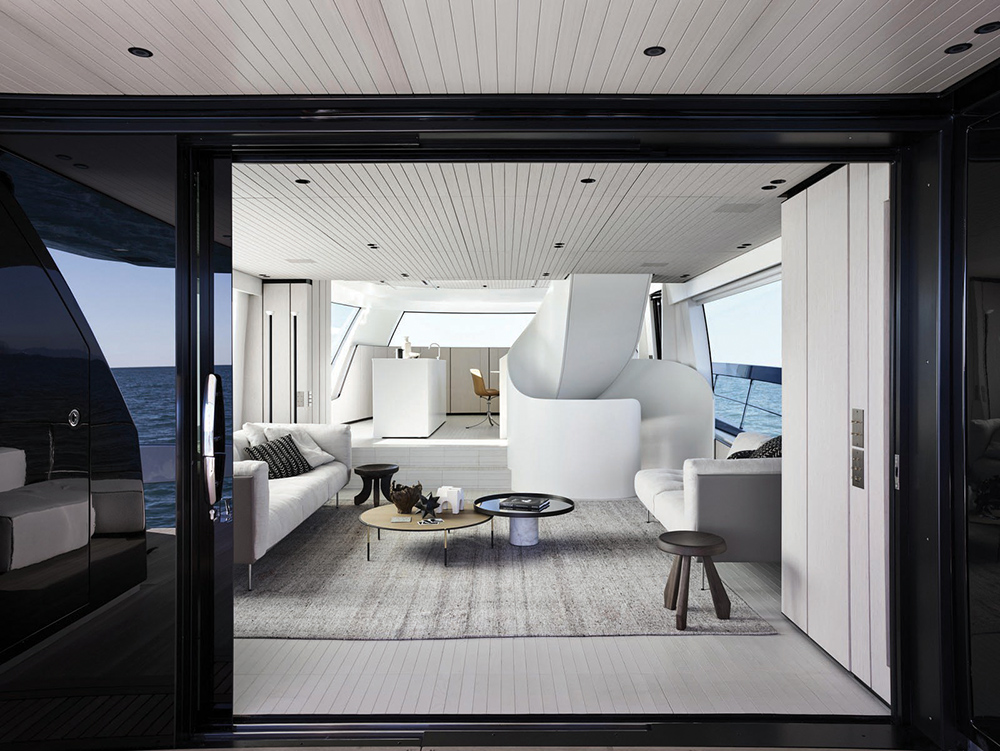 The concept behind the project starts once again from the company’s desire to propose a completely innovative approach to onboard space, an approach by which the Zuccon studio, for the exterior lines, and Piero Lissoni, as it pertains to the interior design, have interpreted the first version of the SX76. Piero Lissoni is also the Art Director of the company.

The SX76 project proposes, on a smaller scale, the idea presented for the first time in the SX88, of an open-space yacht, a ‘social’ boat, that this develops into a unique and continuous environment from stern to bow where the interior living space is maximized with the open kitchen, adjacent to the dining room, next to the living area, with seamless continuity between the interior and exterior, thanks to the large windows overlooking the sea.

The décor of the first unit is a perfect example of Lissoni’s clean and elegant style that combines elegance and simplicity, in a space characterized by soft and neutral colors flooded, on each side, by natural light that creates a warm atmosphere with a homely feel. “The interior is designed with a versatile and customizable layout. I like to call these boats’ elastic yachts‘ where you can create your model, decide where to place the Owner’s cabin, or choose from an extensive catalog of materials and features”, says Lissoni.  (PHOTOS FEDERICO CEDRONE/LISSONI & PARTNERS)

How Facebook Allows Misinformation to Spread Even After It’s Flagged