After just one sip of this new, ultra-premium tequila, you’ll understand why it’s best to keep your friends close but your enemies closer.

During his first term of the business school at the University of California Santa Barbara in 2012, British entrepreneur Robin Clough found himself sitting at a roadside café in Mexico. He was on a trip to visit the family of his Mexican friend and classmate, and during this pit stop, the café’s owner offered Clough a taste of his own personal tequila. “I was apprehensive,” Clough recalls. “I had this preconception of tequila being this thing that comes out at 2 o’clock in the morning or something that you do with lime and salt as a ritual punishment with your friends.”

Clough may have been apprehensive, but the café’s owner was persistent and persuasive. “I tried some,” Clough says, “and the thing that I tasted that day just completely blew my mind. I was pretty well-versed in spirits in general, but with tequila, I had never tried something that special or that unique. What I tried that day was subtle and complex and something that you wanted to sip over a meal.”

Once Clough learned that the revelatory spirit that he had just tried was only an average tequila by Mexican standards, he not only understood what a quality sipping tequila could be but also committed himself to produce one that would revolutionize Britain’s drinking culture and later enhance high-end tequila markets around the world.

After a year spent sharing samples of that introductory tequila with his friends back home in England, Clough partnered with his Mexican friend and classmate—as well as another entrepreneurial friend in London—and together the trio set out to find a master distiller in Mexico who could work with them to create a unique tequila all their own. Three years later, in 2017, Clough and his team launched Tequila Enemigo, a brand whose name means enemy in Spanish and reflects its founders’ desires to challenge the status quo—specifically, according to Clough, the unfounded statements that major brands routinely make about the overall quality of their spirits.

“We felt that the reason tequila historically had a negative reputation is that there were a lot of brands over-marketing their products,” says Clough, Enemigo’s CEO. “We want to be the enemy of that is marketing, and we’re letting the liquid speak for itself.”

Fittingly, Enemigo has earned more spirits competition awards in the last two and a half years than any other tequila brand. 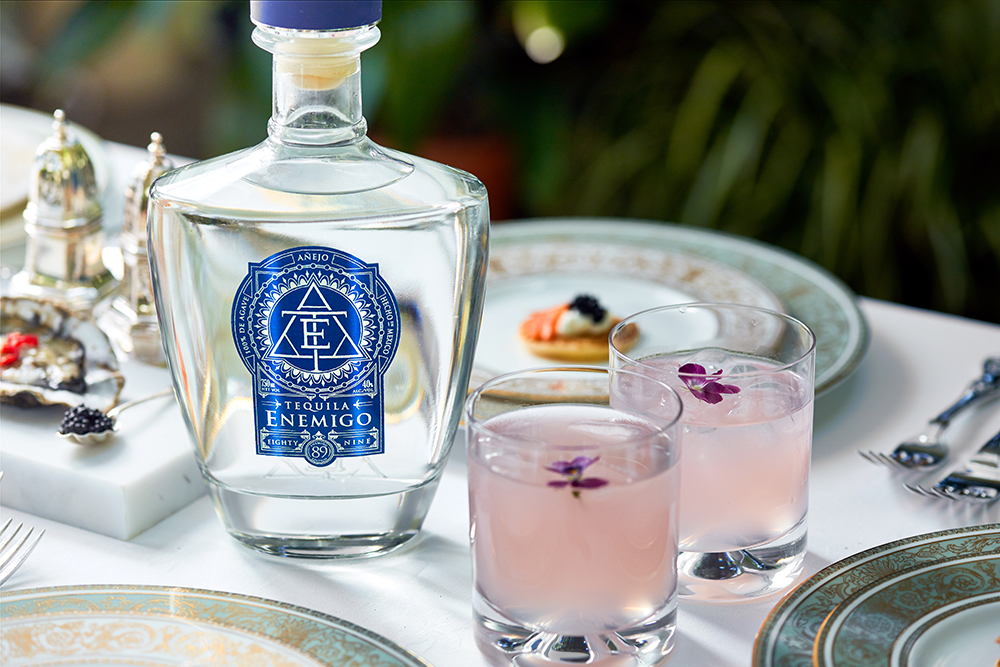 Enemigo’s Añejo Cristallino ($70), which earned a double gold medal at the San Francisco World Spirits Competition in 2019, is unapologetically agave forward—just as any tequila aficionado would desire—delivering bright, herbaceous notes on the nose and palate, with a slight touch of spice on the finish. Yet, this velvety smooth añejo, which matures for more than a year in new, medium-charred American oak barrels, proves that appearances can be deceiving. A final, three-phase carbon-cellulose filtration process strips the liquid of all visual evidence of its lengthy cask maturation; however, distinctive and traditional añejo flavors remain, championed by prominent notes of vanilla (along with subtle hints of coconut), which mingle with those aforementioned herbaceous flavors from the agave. With this cristallino, Enemigo delivers the bright, crisp characteristics of traditional Blanco tequilas, but it wraps them up in a sophisticated and silky package that warrants easy, languid sips.

Enemigo’s Extra Añejo ($170), by contrast, is softer and more subdued, with a light body that allows its agave flavors to shine among the more robust tastes of caramel and butterscotch. An ideal summer sipper for those who seek a lighter, less-rich spirit still teeming with barrel-aged flavors, Enemigo’s extra añejo reveals its complexity the longer it sits on the palate. With patience, imbibers can coach out hints of bubblegum sweetness and black pepper. Equally appealing, this slightly-more-than-three-year-old tequila finishes somewhat dry, which balances the spirit’s upfront sweetness. “The first 30 seconds after you try it, you can feel the flavor developing,” Clough says. “The agave comes and goes; the oak comes and goes; the hints of demerara come and go, but it’s still a tequila.

“We always knew that we wanted to do something that was really different from what tequila is expected to be,” the 30-year-old continues, “and the moment that people have when they first try Enemigo is my favorite moment of my whole job. Everyone looks at me the same way that I looked at the owner of the roadside café in Mexico. But when they try it, I see their facial expression change. That moment that I had at that roadside café where my mind was blown, that’s something that we want everyone to have, even the most distinguished tequila drinker.”