Italy’s coronavirus lockdown has triggered violent protests in prisons across the country, as inmates fear a devastating outbreak behind bars.

Eleven people are dead after protests erupted in 27 prisons Monday. Inmates took staff hostage, launched mass breakouts, lit fires, and scaled the roofs of prisons. Most of the deaths appear to have been overdoses of methadone looted from prison clinics, but at least one was from smoke inhalation, according to Francesco Basentini, the director of the Italian prison system.

The riots began Saturday in the city of Salerno, when news leaked that the government was imposing an unprecedented lockdown of the country’s north, impacting about 16 million people, or a quarter of the Italian population. With the number of confirmed cases continuing to soar, the emergency quarantine was extended to the entire country Monday night.

The lockdown led prison authorities to cancel family visits and day releases, which sparked an angry response from prisoners. Inmates also called for an amnesty to allow them to serve their sentence from home during the coronavirus crisis, and urgent action to reduce overcrowding, amid fears that the virus could sweep through the jails. Italy’s jail system is designed to hold about 51,000 inmates but houses about 10,000 more than that, resulting in chronic overcrowding.

Further protests were reported Tuesday, including in the southern city of Campobasso, where inmates set fire to mattresses to demand increased communication with their families during the crisis, and at Palermo’s Pagliarelli jail, where inmates overran sections of the jail and climbed on the roof.

In Modena, in the north, inmates took two guards hostage, stole their keys, and rampaged through the prison. They also looted methadone syrup from the infirmary. Eight inmates from the prison are reported to have died, and six are in serious condition. At least three guards and a number of health workers were also injured in the violence.

Three other inmates were reported to have died of overdoses at a prison in Rieti province, after inmates briefly took control of the facility.

In the southern city of Foggia, inmates occupied the entire compound Monday before launching a mass jailbreak, the Justice Ministry said. After tearing down a gate, about 50 inmates fled the complex. About 30 were rounded up nearby and returned to the jail, but about 20 others stole staff cars to flee.

In Melfi prison, which has about 200 inmates, prisoners took four guards and five health workers hostage for about 10 hours, before releasing them and returning to their cells late Monday. Four prison officers were also taken hostage in Bologna, where 350 inmates occupied two sections of the jail.

In Milan’s San Vittore prison, prisoners scaled the roof after seizing keys to the complex, holding a banner reading “indulto” — Italian for “pardon.” Footage from the scene showed fires burning inside the building. Outside, police clashed with inmates’ relatives, who had gathered to protest the situation.

And in the Rebibbia and Regina Coeli prisons in Rome, inmates lit fires and raided a pharmacy. Almost all of the 27 affected jails have sustained serious damage, according to the Justice Ministry.

“The situation is catastrophic,” Aldo Di Giacomo, spokesman for the prison officer union SPP, told Italian news agency Adnkronos. He said the guards had warned their bosses that the situation was likely to explode due to tensions over the coronavirus.

He said the army needed to be called in to guard the prisons, which he believed should be completely sealed off for the rest of the lockdown, with inmates confined to their cells.

Prisoners’ rights advocates have called for a more sympathetic response for inmates during the outbreak, saying they are terrified and confused by the virus, and that inadequate testing has been conducted in jails. Inmate advocacy group Antigone has called for the government to allow more prisoners to serve their sentences on house arrest for the duration of the crisis.

“If people outside are scared, imagine what it’s like inside,” spokeswoman Susanna Marietti told the DPA news agency.

But Italy’s hardline opposition leader Matteo Salvini said there should be no concessions made to the rioting inmates. “To handle this serious emergency of the detention centers, you need the iron fist of an Extraordinary Commissioner who brings back order and respect for the law,” he tweeted.

Cover: Inmates stage a protest against new rules to cope with coronavirus emergency, including the suspension of relatives’ visits, on the roof of the San Vittore prison in Milan, Italy, Monday, March 9, 2020. (AP Photo/Antonio Calanni) 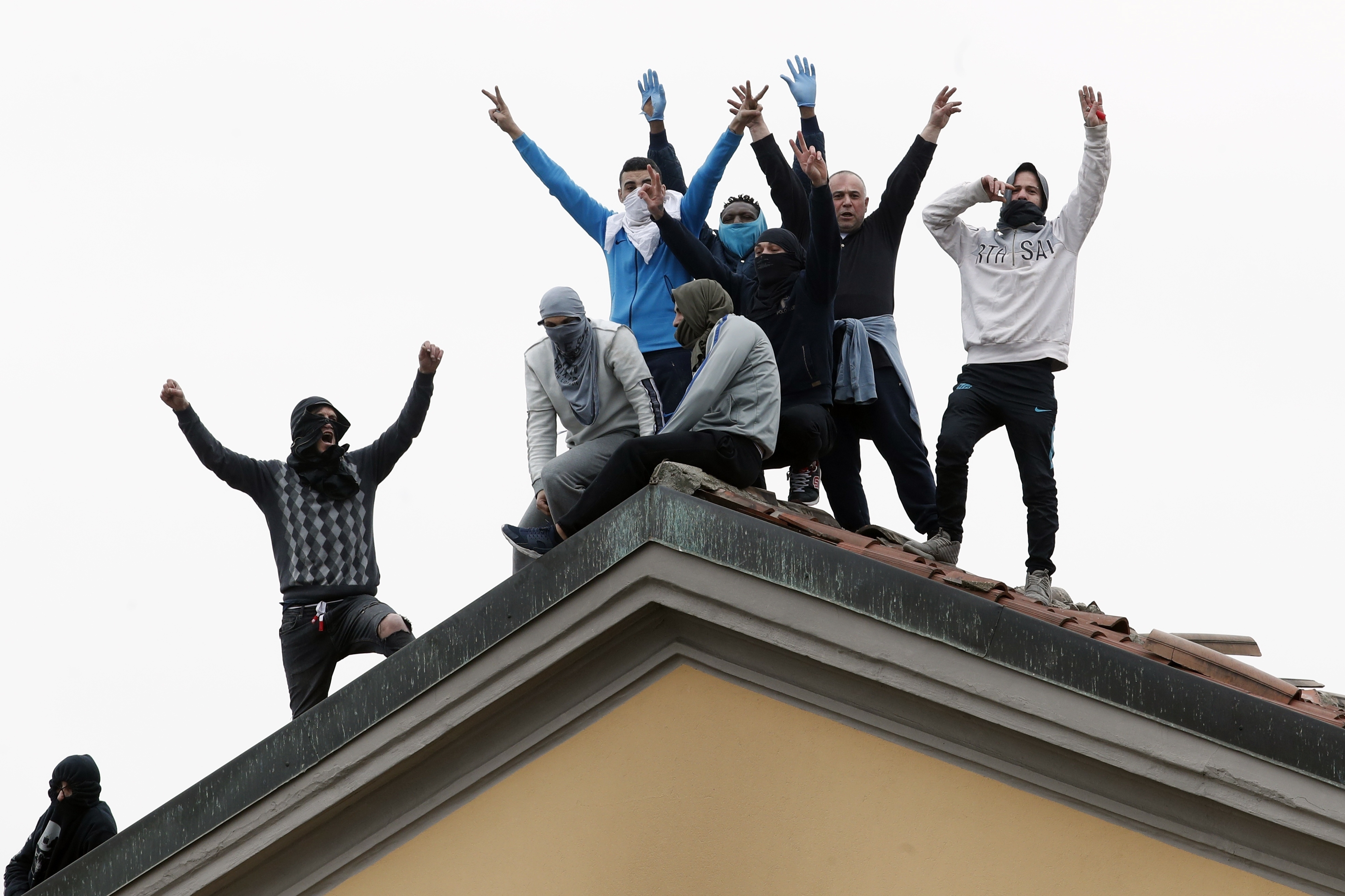 Coronavirus Has Hit Congress. But They Will Still Vote *in Person* on This Pandemic Relief Bill.