Here’s the latest on the coronavirus situation in the U.S. Check back here throughout the day for updates.

Across the U.S., everyone from the White House to state health departments to local school districts to individual families have suddenly ramped up their efforts in the race to try to control the spread of the coronavirus as cases multiply in almost every state.

After its slow, botched rollout of tests last month, the Trump administration on Friday announced it’s trying to fast-track the process, with the FDA to allow speed testing for COVID-19 through private labs. They’ll also set up a 24-hour hotline for labs that are struggling to get the materials they need to run the tests. Testing so far has been sluggish, in part due to a shortage of testing kits and the components.

President Trump on Friday appointed a coronavirus czar within the Department of Health and Human Services to coordinate all testing-related efforts. Brett Giroir, the assistant secretary for health, will now be responsible for coordinating all testing efforts between the Centers for Disease Control, the FDA, and state- and private-run labs.

“A key priority is to ensure that patients, doctors, and hospitals can access tests seamlessly and with maximum ease, and Dr. Giroir will lead efforts to execute on that goal,” HHS Secretary Alex Azar said in a statement.

On Thursday, Trump administration health officials took a drubbing before Congress for its failure to provide tests to the places that need them. Dr. Anthony Fauci, a member of Trump’s White House coronavirus task force, admitted, bluntly, that the system wasn’t working.

“It is a failing, let’s admit it,” Dr. Fauci said. “The idea of anybody getting [a test] easily, the way people in other countries are doing it, we’re not set up for that. Do I think we should be? Yes. But we’re not.”

Testing is key to understanding the scope of the outbreak and isolating people who could spread the very contagious virus. In New Rochelle, New York, site of the largest cluster in the U.S., drive-thru testing started Friday.

Schools in many states are shutting their doors to students for weeks or months.

Ohio, Maryland, New Mexico, and Michigan are closing all public K-12 schools in their states. In Washington State, the epicenter of one of the coronavirus outbreaks in the U.S., schools will be closed for a month in three counties. In Washington, D.C., schools are closed through the end of March. All schools are closed in San Francisco for three weeks. In New York City, where schools had already closed in the Bronx, schools were closing in Staten Island and Brooklyn.

The closures will leave parents scrambling to find child care for their kids, or taking sick leave that isn’t guaranteed in the U.S. in order to care for their children.

In New York City, which has the largest school district in the country, schools chancellor Richard Carranza said closing down schools would be a “last resort.” The district has 750,000 poor students, 114,000 of whom are homeless. Many of those students don’t have internet access at home, so couldn’t participate in remote learning, and many rely on school for some of their meals.

Public health experts aren’t sure that closing down schools is a good idea. “We closed schools during H1N1, and we saw tremendous community disruption,” Jeff Duchin, a Seattle and King County public health official said at a media briefing recently. “We found that the children gathered elsewhere when we weren’t allowing them to go to school. They went to the mall.”

Plus, it created disruption for their parents, who had to take off work to care for their kids, Duchin noted.

But as the virus spreads, school districts see no other options. Teachers unions have started to call for schools to be shut down, and for the schools resources to be put to use providing resources to families in need, like continuing to provide school lunches.

Cities and states across the country are declaring states of emergency to fight the virus.

The emergency declarations have been ramping up since the first cases of the virus were detected in the U.S. in January. They allow the government to waive certain regulations around travel, funding, and quorum, allowing governors and mayors to move more quickly to implement measures to fight the spread of the virus. In New York, for example, it allows school districts to buy cleaning supplies without first going through a competitive bidding process.

Trump’s expected to declare a federal state of emergency on Friday afternoon. Doing so would free up federal funds to fight the spread of the virus and allow the Federal Emergency Management Agency to take the helm of the response to the virus in the states.

“We have things that I can do, we have very strong emergency powers under the Stafford Act,” Trump told reporters in the Oval Office on Thursday. “I have it memorized, practically, as to the powers in that act. And if I need to do something, I’ll do it. I have the right to do a lot of things that people don’t even know about.”

Cover: Servpro cleaning workers are sprayed as they exit the Life Care Center in Kirkland, Wash., Thursday, March 12, 2020, at the end of a day spent cleaning inside the facility near Seattle. The nursing home is at the center of the outbreak of the new coronavirus in Washington state. (AP Photo/Ted S. Warren) 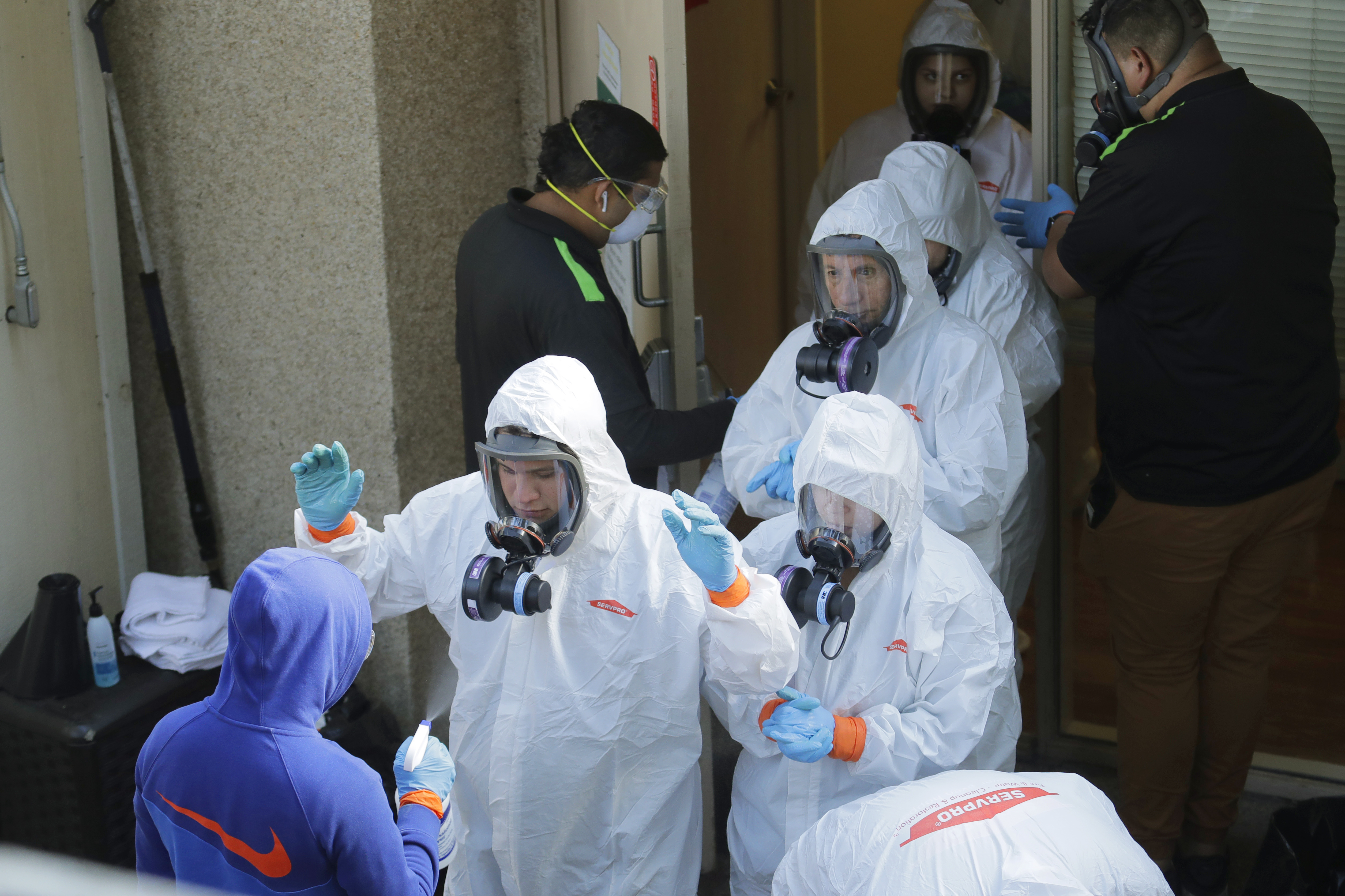 IMF upgrades 2020 economic forecast but warns of a slower 2021