Now, the city and its surrounding towns are convulsing with a different kind of natural disaster: the spread of the novel coronavirus, which similarly strands people inside as they’re forced to work from home or lose their jobs altogether. LifeWire’s executive director Rachel Krinsky said that’s very bad news for people facing domestic violence.

“We expect rising tension and likely rising violence,” said Krinsky. “Which makes everybody more vulnerable: the survivor and children in the home.”

Domestic violence experts anticipate that rates and severity of abuse will surge as public officials and communities try to stem the spread of the novel coronavirus through imposing restrictions or asking individuals to “social distance” or “self-isolate.” While these measures are unlikely to turn anybody into an abuser, people who already have violent partners will now be trapped at home with them — and facing the anxiety of losing their jobs and incomes, which also tends to increase the possibility of domestic violence.

“Abuse is about power and control,” said Crystal Justice, chief development and marketing officer for the National Domestic Violence Hotline. “And an abuser can use any tool to exert that power and control, including a national health concern, such as COVID-19.”

READ: Tenants and landlords are terrified Coronavirus will mean evictions.

So advocates across the country are rushing to find ways to help curb the coronavirus’ impact on survivors.

The National Domestic Violence Hotline hasn’t experienced an increase in calls about the coronavirus, but Justice expects that to change soon. Seattle and New York City, two of the most-affected areas, just began seeing mass numbers of people staying home from work in the past several days.

If local or regional domestic violence groups are forced to suspend their own helplines, survivors who call in will be directly rolled over to the National Domestic Violence Hotline, Justice said.

In New York City, where Mayor Bill de Blasio signed a declaration of emergency Thursday evening, senior director of the crime victim assistance program at Safe Horizon Kimberlina Kavern has been fielding questions from survivors about coronavirus. People are asking: What will access to systems going to look like? Are the courts going to stay open? Is it going to be business as usual?

Safe Horizon provides counseling, legal aid, and shelters, among other services, for domestic abuse survivors. All of those services are still available, Kavern said, and the organization is holding daily meetings to strategize about COVID-19, the disease caused by the coronavirus.

“It’s an ever-changing landscape, but I think everyone is doing everything that they can to try to keep critical services,” she said. The shelters are taking extra cleaning precautions, and domestic violence survivors may be able to teleconference into court proceedings. “We want to be really proactive. So, given that we don’t know what the landscape is gonna look like tomorrow — things could be quarantined at any time — we want to come up with a safety plan so that you’re as prepared as possible.”

A “safety plan” is a strategy to minimize risk to a survivor safe even if she’s still in contact, or even living, with her abusive partner. For example, that woman could try to avoid stairs and unsafe rooms — like bathrooms or kitchens, which tend to have sharp objects and hard surfaces — or set up a code word with neighbors who can dial 911.

“If everyone is in the house all the time, there’s no escape window.”

While both Justice and Kavern said their organizations are used to coming up with safety plans for people remaining in violent situations, those will now likely need to evolve as the proximity between an abuser and their victim increases. If schools close, survivors who have children may also need to factor that into their safety planning. That’s already fairly common: in 2018, about 83,000 of the calls, texts, and chats into the National Domestic Violence Hotline reported that their abusive situation involved children.

“This is going to be a sort of hyper-extension of that. It certainly can be very anxiety-provoking, knowing that if schools are closed and people are home and you’re gonna be home all day,” Kavern said. Violence “could be more frequent and more concentrated because you’re all in the house together.”

And if someone does decide to flee, the coronavirus could make executing that escape more difficult, according to Krinsky. “If everyone is in the house all the time, there’s no escape window.”

Since that first week of March, the situation in Seattle has spiralled dramatically. As of Thursday, there were 270 total cases, with 27 deaths. Washington state Gov. Jay Inslee has ordered all public and private K-12 schools in three counties to close through April 24.

LifeWire is still offering almost all of its services, though it had to cancel its support groups.

The organization continues to run a transitional living facility for moms and kids in eastern King County, where Seattle is located. But Krinsky isn’t sure what will happen if someone there starts showing COVID-19 symptoms.

READ: Iran launched an app that claimed to diagnose Coronavirus. Instead, It collected location data on millions of people.

“We don’t have any place there that we can isolate folks so, you know, we’re just encouraging hand washing and hygiene and trying to keep an eye on it,” Krinsky said.

Doris O’Neal, the program manager of domestic violence services for Seattle’s YWCA, also fears the possibility of a coronavirus infection. The YWCA facility, which can house up to 23 women and their families, has just a communal bathroom; if someone got sick, O’Neal said she’d have to simply send them to the hospital because isolation would likely be impossible.

Still, O’Neal said her staff wouldn’t turn anybody away even if they had COVID-19 symptoms. While the staffers wouldn’t be able to admit a potentially infected woman to the program’s shelter until after she underwent a 14-day quarantine, they’d try to help that woman get tested for the coronavirus and figure out a plan: “What can we do to be safe, just for that time, that you can plan to leave that abusive situation?”

“I don’t have all the answers, because things are happening — it’s almost bringing tears to my eyes,” O’Neal said. “I’m stressed the hell out.”

Right now, it’s impossible to gauge just how much it will impact survivors’ finances. But last week, LifeWire made what Krinsky called a “wild guess”: In order to support survivors who may lose their housing or income through April and May, the organization will need to come up with about $60,000.

But Krinsky fears that money won’t come. If the economy worsens and events keep getting cancelled, domestic violence groups will find themselves in what Krinsky called a “fundraising nightmare.” And it’s not as if these organizations were awash with cash to begin with: In 2018, the National Domestic Violence Hotline was able to answer more than 371,000 calls, chats, and texts — but it missed out on about 202,000 more because of a lack of resources.

“Most folks don’t think about domestic violence” to begin with, Krinsky said. Now, “Most people are so consumed, in King County, with just how this virus is impacting them and their workplaces and people that they care about who are in high risk groups. I think most people don’t even have the mental bandwidth to think about larger social concerns.”

Cover: A young woman suffering from domestic violence stands in the bay window of her home. (Photo by In Pictures Ltd./Corbis via Getty Images) 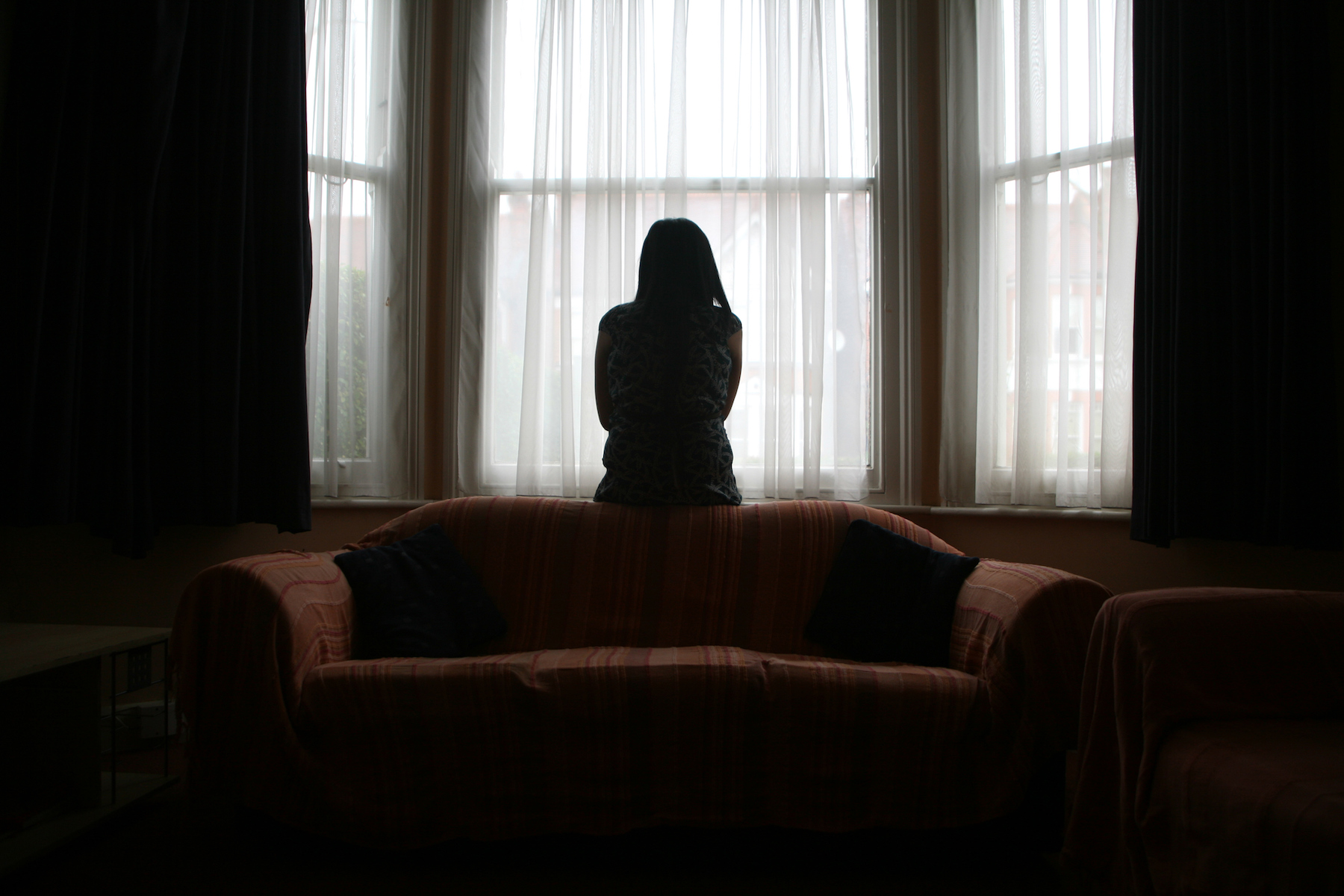