Iran announced another major leap in its coronavirus death toll Friday, with the number of fatalities rising to 514. But as evidence mounts of a much wider outbreak — including burial pits than can be seen from space — experts say that figure is almost certainly just the tip of the iceberg.

Even by the official statistics — which put the number of confirmed cases at 11,364 — the country of 80 million people is battling an enormous COVID-19 outbreak, the world’s largest outside of China and Italy. But there’s a growing body of evidence supporting claims, both inside Iran and out, that the country’s ruling clerics are lying about the real toll of the virus.

The most vivid example is satellite images of two burial pits that first appeared at Behesht-e Masoumeh cemetery in the Shia holy city of Qom, just days after the first Iranian cases were reported there last month. By the end of February, continual excavations for burials at the site had created two trenches 100 yards long — about the length of a soccer field — that could be seen from space.

The images, taken by the private space technology company Maxar Technologies and first reported in The New York Times, show a large mound of white powder, believed to be lime, which Iranian officials had previously said was being used to bury victims of the virus.

READ: What you need to know about coronavirus in the U.S.

Amir Afkhami, associate professor of global health at George Washington University, told The Guardian that the pictures gave further credence to suspicions that the regime was trying to cover up the real toll of the outbreak. “It doesn’t surprise me that they are now trying to create mass graves and trying to hide the actual extent of the impact of the disease,” he said.

Further evidence of mass burials at the site came in the form of a video, apparently shot in late February, that showed men at the cemetery carrying a coffin toward one of the trenches, the Washington Post reported. The video’s narrator says the area is the “section for coronavirus victims,” and that the number of people buried there alone already outstrips the government’s official death toll.

“More than 80 have been buried in this section so far, and they say only 34 deaths,” said the man, echoing allegations of cover-up that were first made against the regime by a politician in Qom on Feb. 24.

Lawmaker Ahmad Amirabadi Farahani accused Iran’s health ministry of lying about the scale of the outbreak, saying there had been 50 deaths in Qom alone at a time the regime was claiming there were just 12 nationwide.

The allegations prompted Deputy Health Minister Iraj Harirchi to hold a press conference to “categorically deny” the allegations, but his denials were undermined by the fact he coughed and sweated profusely as he did so. The next day, Harirchi revealed he too had tested positive.

The photographs of the burial sites aren’t the first alarming images to emerge from the cemetery in Qom. Last week, footage circulated on social media of dozens of black body bags on the floor of the cemetery’s morgue. Ali Ramezani, the morgue’s director, told Iran’s state-run IRIB TV network that there was a “pile up” of bodies at the facility as they waited for coronavirus testing.

Iran’s ruling class has been also hit hard by the virus, adding to suspicions that the outbreak was much more widespread than they were letting on, said Vakil.

“To me, it’s clear they missed the boat because so many of their own are infected,” she said.

READ: Coronavirus has northern Italy’s hospitals on the brink of collapse

Among the senior officals infected with the virus are two of the country’s 11 vice presidents, Eshaq Jahangiri and Masoumeh Ebtekar, the head of emergency medical services, a top adviser to Supreme Leader Ayatollah Ali Khamenei, and about 8% of the country’s parliament. At least three senior officials and two MPs have died.

Vakil said that a cover up was a natural impulse for Iran’s authoritarian government, which was under pressure on both the domestic and international fronts. Its response to the crisis has been attacked at home, with lawmakers challenging the official figures, and medical experts criticizing the delayed efforts at social distancing.

“The government failed to quarantine and disinfect all cities before it was too late,” Hossein Keyvani, a virologist at Tehran’s Iran University of Medical Sciences told Anadolu news agency Thursday.

The regime has form for misleading the world over major embarrassments: Only in January, its military initially denied shooting down a Ukrainian airliner over Tehran, taking days to admit having caused the disaster.

READ: No soap, little water, and no way out: Refugee camps brace for coronavirus

Vakil said that while the real number of deaths was impossible to know, Iran’s authoritarian government was trying to downplay the number of deaths to avoid a public backlash to its mishandled response to the pandemic, which has been linked to outbreaks in at least 10 other countries in the region.

“They underestimated the impact of the virus, they missed the boat on this in a disastrous way,” she said.

“It’s a threat for them, because reports of major loss of life could lead to significant public unrest.”

Cover: Iranian Firefighters disinfect streets in the capital Tehran in a bid to halt the wild spread of coronavirus on March 13 2020. Iranian forces will clear the streets nationwide within 24 hours and all citizens will be checked for the new coronavirus in a bid to halt its spread, the military said. (Photo by -/AFP via Getty Images) 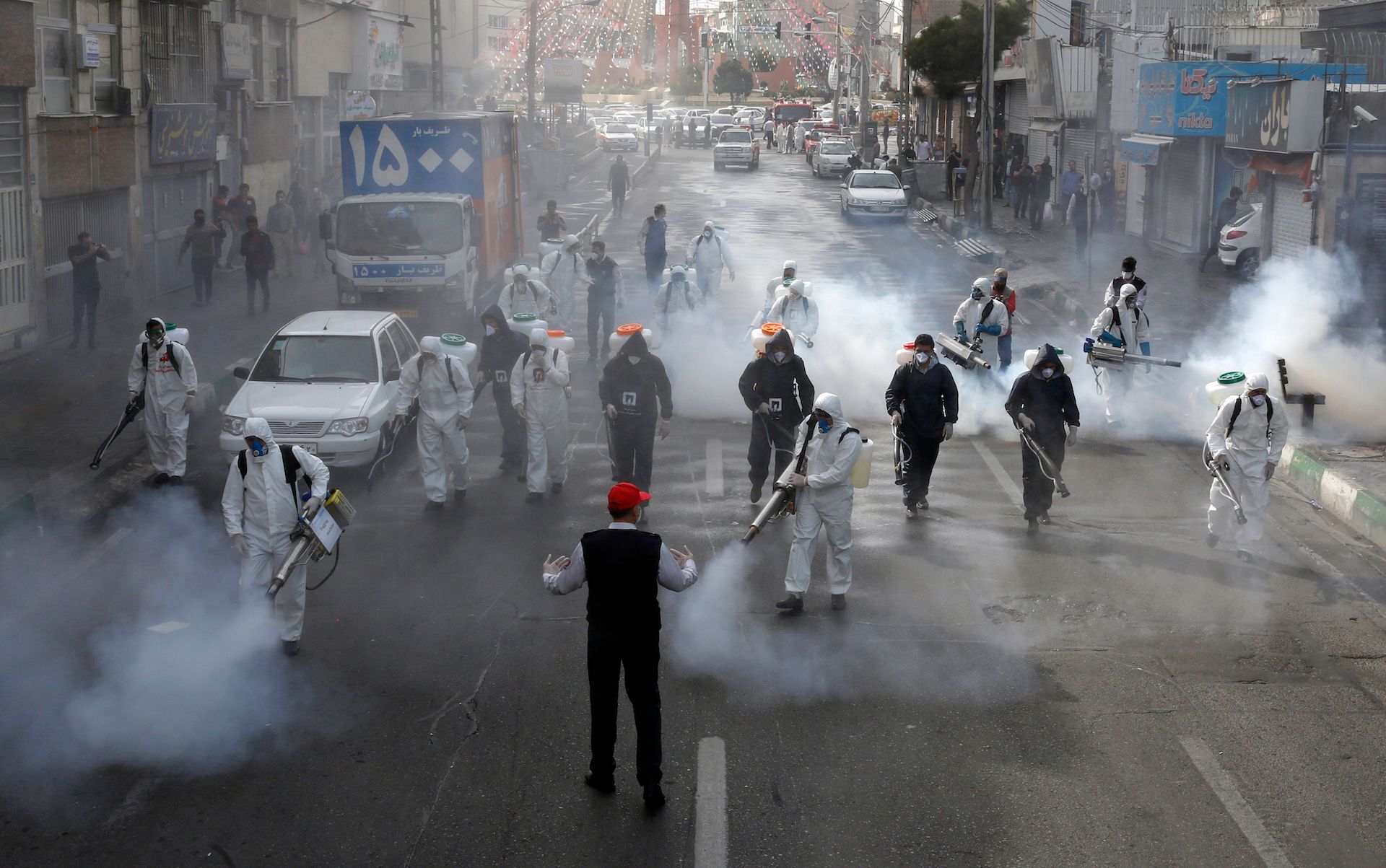