The London EDITION has become something of a Fitzrovia landmark since opening in 2013. The 173-room hotel occupies a piece of prime Edwardian real estate on the corner of Berners Street sitting opposite the Sanderson Hotel. Oxford Street is a few minutes walks away so it is hard to imagine anywhere more centrally located. You are literally in the very beating heart of central London. Three main Tube stations can be reached within a 10-minute walk, providing direct access to all areas of London. The British Museum is a 15-minute walk away while the delights of legendary Soho and literary Fitzrovia are a few steps away outside. While there is no spa the London EDITION has an underground fitness center and a nightclub.

Marriott International teamed up with legendary New York designer and founder of Studio 5, Ian Schrager to create the EDITION luxury brand. EDITION currently spans 10 locations across the globe from Miami Beach and New York to Abu Dhabi and Shanghai. Future openings include Reykjavik, Iceland in summer 2020.

Schrager is also the creative force behind the Sanderson Hotel which opened 15 years before the London EDITION. The result is for a first time EDITION guest frankly breath-taking. Very much a destination hotel to see and be seen, the London EDITION is on a different scale to other luxury hotels in the city. The initial impact is in the extraordinary interior design that strikes you as soon as you saunter through the columned façade into the vaulted 19th century stucco-ceilinged lobby and bar area. You are immediately met by a gargantuan Dali-esque chrome egg sculpture created by Ingo Maurer that hangs from the ceiling. The Belle Epoque meets 21st Century atmosphere is something to behold. 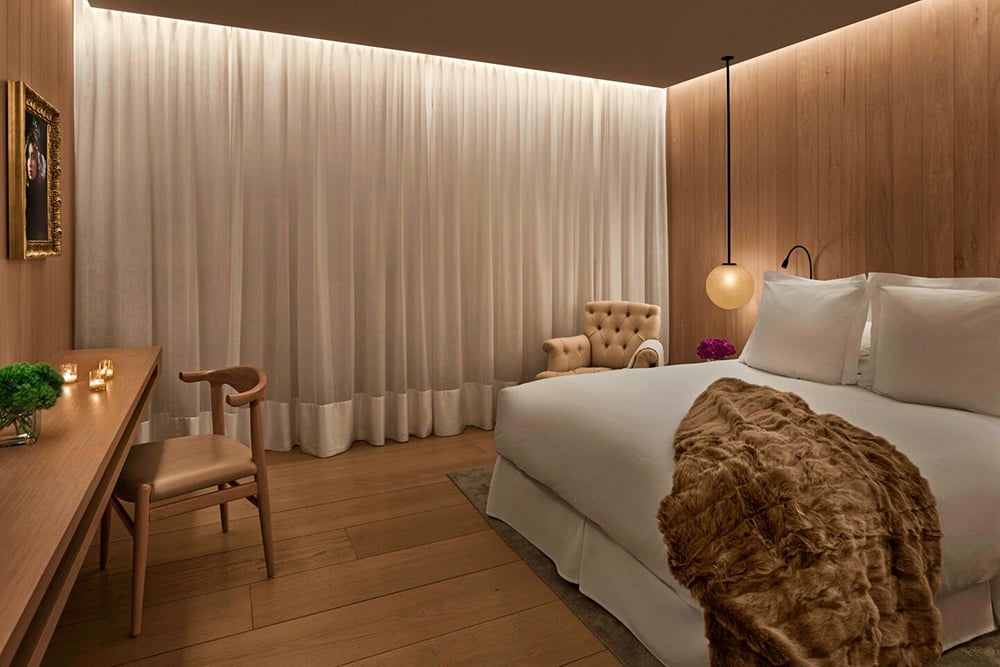 After a prompt check-in with the pleasant, amiable and immaculately dressed staff we were taken up to our room by the amicable bellman. We passed a wooden paneled corridor that features vertical low lit strip lights, to the Deluxe King room. The large minimalist room, with a cool touch of a Nordic chalet, is a design buffs dream. Beautifully finished in simple dark walnut wood and furnished with a cantilevered desk and tufted George Smith lounge chair. A gold-framed photograph from Hendrik Kerstens adds a playful, artful touch. The centerpiece of the room is the huge King-sized doubled bed framed on each side by two low hanging globe lamps. A faux-fur throw sits astride the bed. A 46″ flat-screen television hung on the wall on the right beside the bed. A lovely detail was how the minibar was hidden discretely into a corner of the wall.

However, the most striking element of the room was the ensuite white tiled bathroom, a real statement piece of design, that featured a large, sexy, walk-in rainforest shower with transparent glass, and a long deep, sloping washbasin that resembled a surreal modernist artwork. 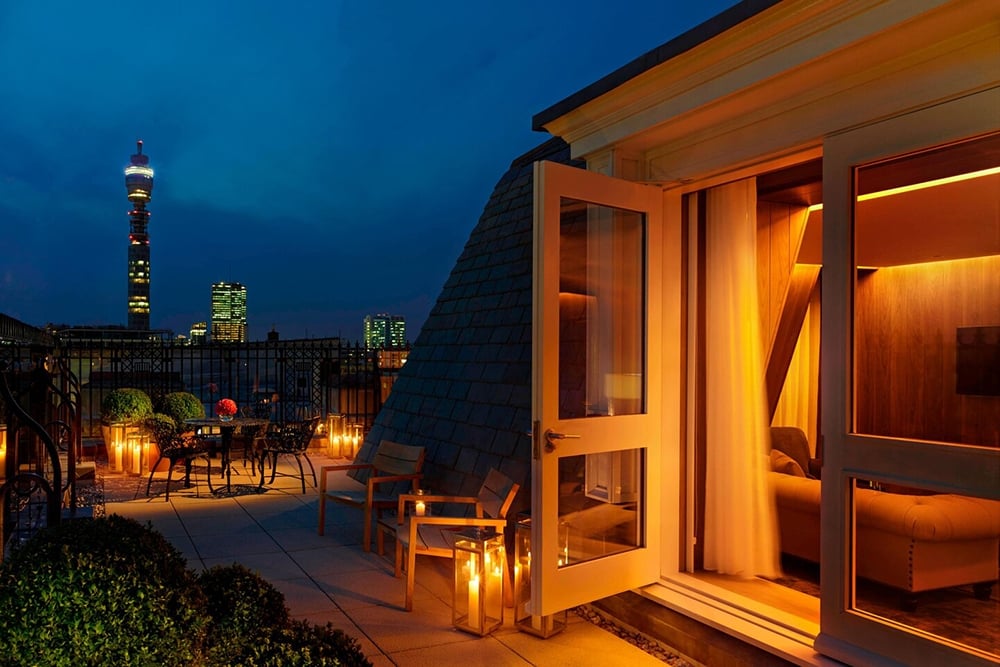 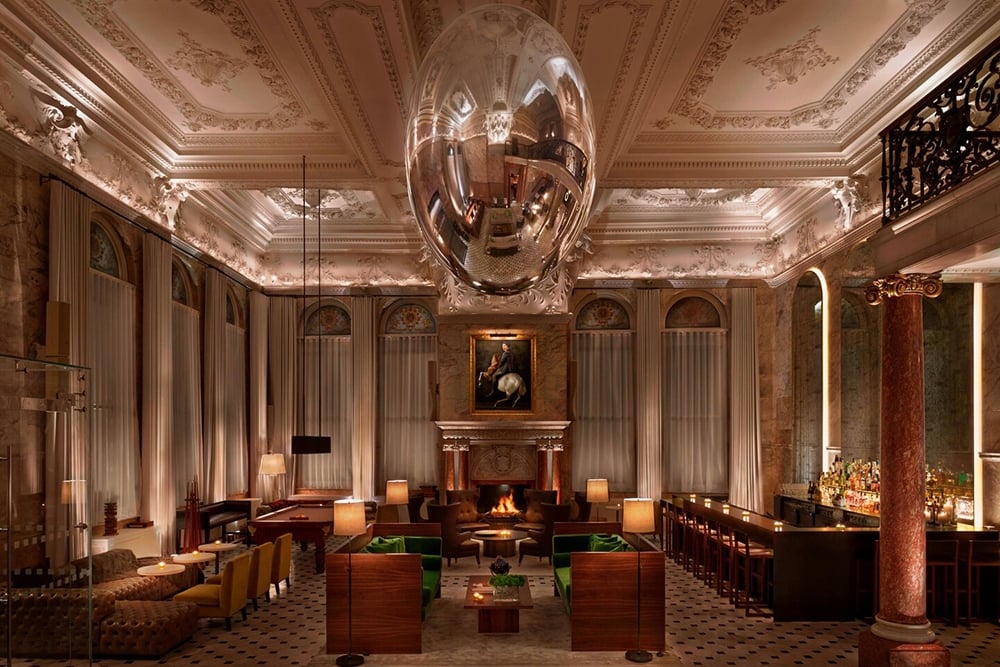 The London EDITION is a very popular hotel. During London’s seasonal fashion weeks throughout the year and events such as the Frieze Art Fair and the London Film Festival every October, the property is regularly booked solid for weeks.

The hotel features a buzzing lobby bar complete with lizard green velvet chairs, intimate seating areas with tufted sofas and a snooker table, and walls covered with paintings. Next door, the more intimate Punch Room is decorated to imitate an old English 19th-century gentleman’s club. Created to be an intimate space away from the Soho crowds, the bar serves 30 specialty punches – including the signature gin-infused EDITION house punch made of gin, jasmine tea, and oakmoss. The Punch Room has a curated soundtrack of soul, blues and doo-wop that is often complemented by impromptu live performances. Both bars are open to 1 am Monday to Saturday and 11 pm on Sundays. Well-heeled A-listers such as George Clooney and Uma Thurman come here. 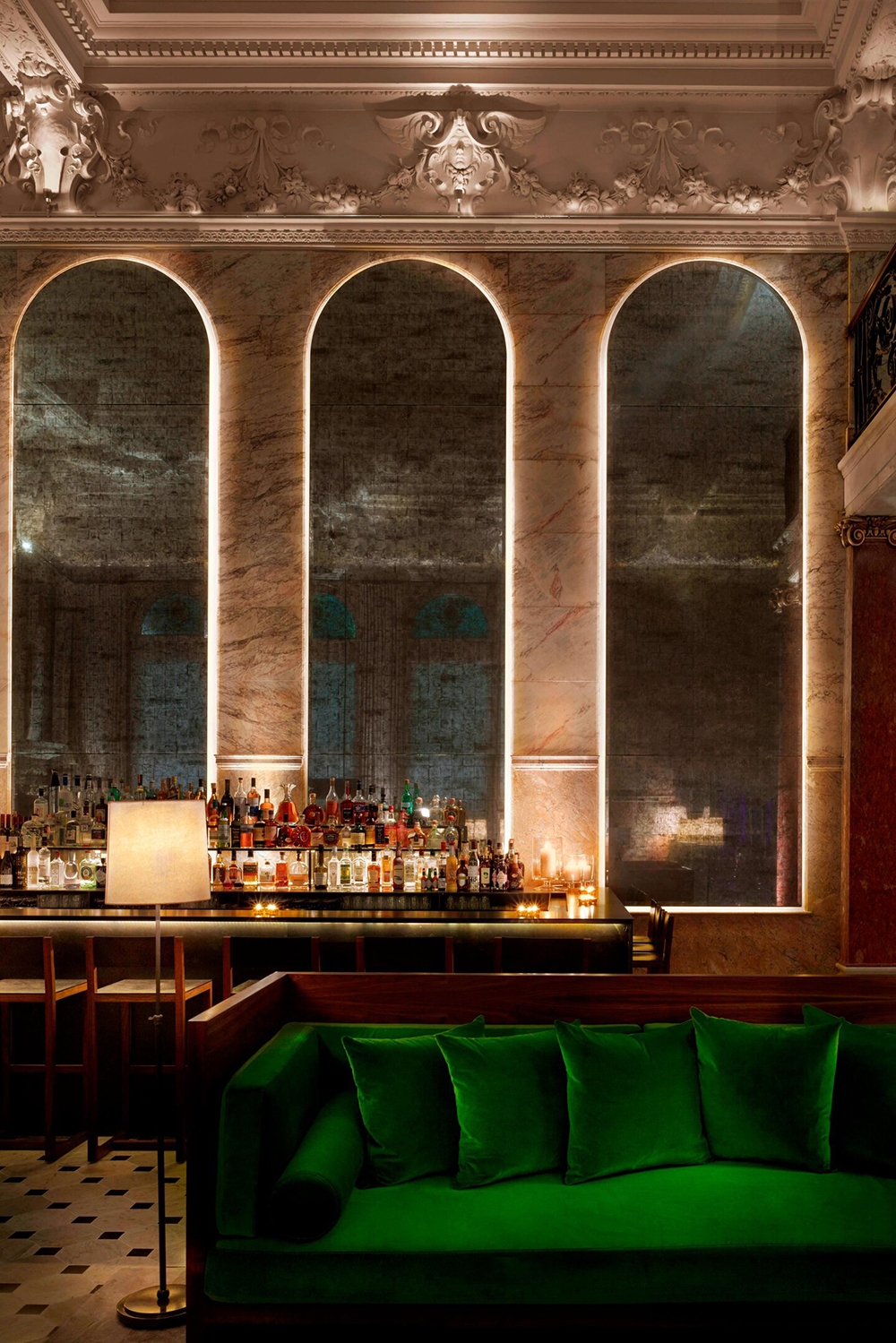 Berner’s Tavern is the London EDITION’s stunningly decorated restaurant run by Michelin-starred chef Jason Atherton. Here you dine under a vaulted 19th-century ceiling surrounded on all sides by an array of gold gilt-framed artworks set against burnt ochre walls and green leather details. There is a private dining room above the restaurant that can host special events for up to 14 guests. Atherton’s seasonal British menu has developed a real following and is open for lunch and dinner with favorites such as starters of crab on toast and mains including Chateaubriand, Dover Sole on the bone and chicken schnitzel. There is a popular Sunday Roast menu. Breakfast takes place in the same room as Berner’s Tavern serving the full English as well as unique signature offerings such as vanilla waffles. Berner’s Tavern also serves afternoon tea.