Italy called in the military to transport dozens of dead bodies from a city overwhelmed by coronavirus victims Wednesday night, as the country recorded its biggest rise in the death toll so far.

The images of military vehicles lined up outside a public cemetery in Bergamo, a city in Italy’s worst affected region of Lombardy, were a chilling illustration of the deepening impact of the virus on the country, where the death toll is likely to soon surpass China’s.

Italian Prime Minister Giuseppe Conte said Thursday that the government would extend the national lockdown beyond the current end date of April 3, after the country recorded a record number of 475 COVID-19 deaths Wednesday.

“My blood has frozen in my veins. The air has been punched out of my lungs,” tweeted Elisabetta Groppelli, an Italian virologist based in London, as she shared an image of the long convoy of army trucks.

The rising numbers of dead in Bergamo, which is about 25 miles northeast of Milan and home to about 120,000 people, have far exceeded the daily capacity of the city’s crematorium, prompting authorities to move about 60 bodies to other regions Wednesday night. Once the bodies are cremated their remains will be returned to Bergamo, according to reports.

Local officials said the city’s crematorium, which had been operating at full capacity for 24 hours a day, could process 25 bodies a day; Bergamo recorded 93 COVID-19 deaths Wednesday.

READ: Why the U.S. could be worse off than Italy with the coronavirus

The city’s mayor, Giorgio Gori, said the true number of deaths attributable to COVID-19 were likely higher, as many people with symptoms died before they could be tested.

Bergamo has been devastated by the coronavirus: according to the Washington Post, there’s a waiting list for burials, many of which are being conducted with only a priest and funeral home worker present, due to restrictions on gathering, and widespread COVID-19 infections. The local newspaper’s obituary section has swollen to 10 pages, and hospitals are overwhelmed.

Earlier this month, Daniele Macchini, an intensive care physician at the city’s Humanitas Gavazzeni hospital, posted a widely-shared account to Facebook, in which he described the dire conditions faced by doctors working to treat an unending influx of COVID-19 patients.

“I understand the need not to panic, but when the message of the danger of what is happening does not reach people… I shiver,” he wrote.

READ: Coronavirus has northern Italy’s hospital’s on the brink of collapse

Another hospital in the city, Papa Giovanni XXIII Hospital, has launched an appeal on GoFundMe for one million euros ($1.1 million) to buy much needed ventilators, monitors and protective equipment. The hospital posted to Facebook Thursday with an urgent call from its head of medicine, Stefano Fagiuoli, for the general population to stay at home, and to donate to their appeal.

“We are in full emergency [mode],” read the automate your posting.

Lombardy’s governor Attilio Fontana warned Wednesday that hospitals in the region would be unable to treat new patients if the number of infections continued to rise.

“Unfortunately the numbers of the contagion are not falling, they continue to be high,” he said, according to Italian news agency Ansa. “We will soon be unable to give a response to those who fall ill.”

Civil Protection Chief Angelo Borrelli announced Wednesday that 2,978 coronavirus patients had died in Italy, where 28,710 people have tested positive for the virus. That brings the total death toll close to China’s, where more than 3,200 have died.

He called on the public to continue to continue to observe the lockdown, which officials hope will lead to a drop in new infections in time. Italy’s interior ministry said Wednesday that 43,000 people had been caught breaking the lockdown rules in the first week of controls.

“It is necessary to limit movements as much as possible,” said Borrelli.

Cover: Relatives stand behind a hearse carrying a coffin outside the Monumentale cemetery, in Bergamo, Italy, Tuesday, March 17, 2020. Bergamo is one of the cities most hit by the new coronavirus outbreak in northern Italy. (AP Photo/Luca Bruno) 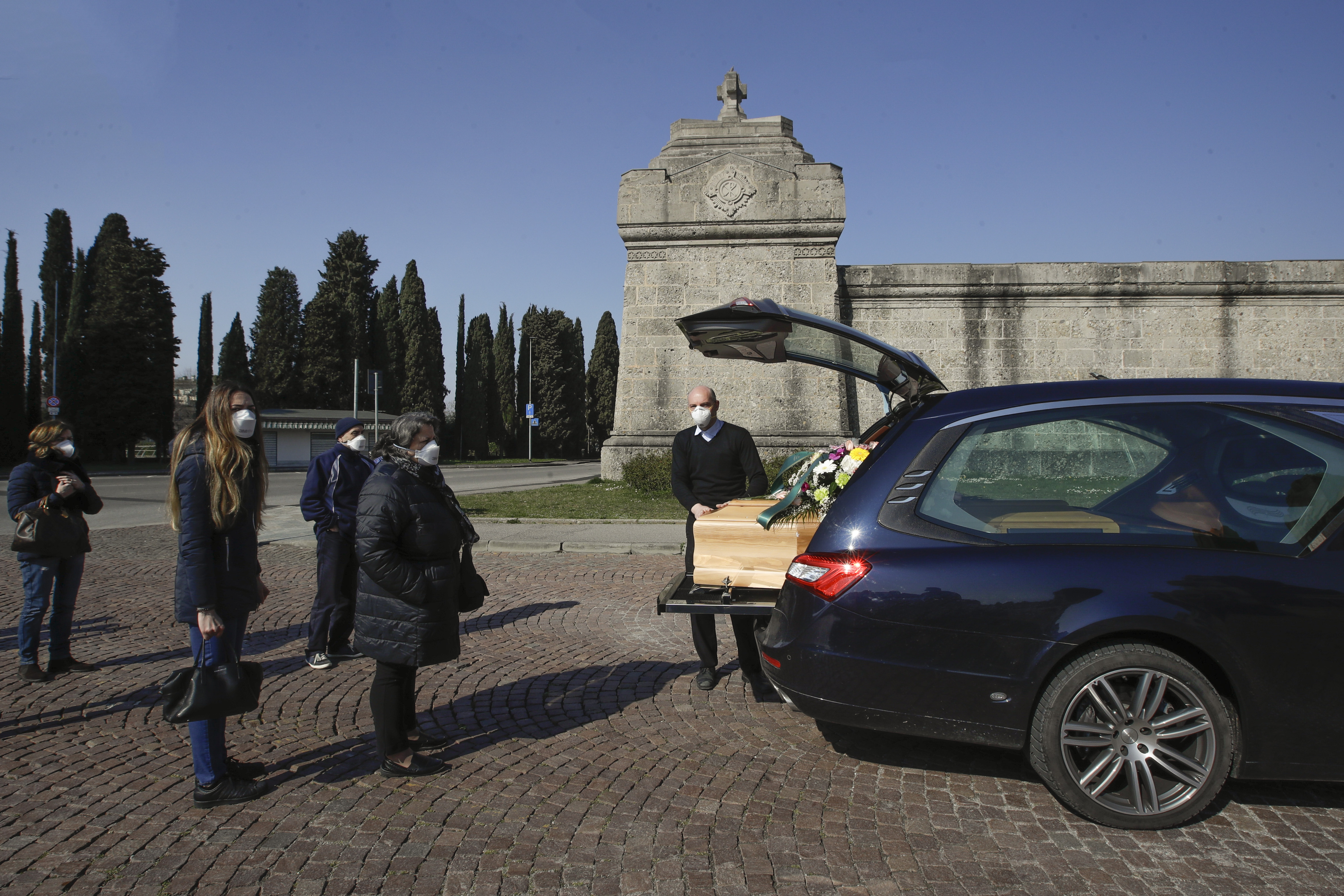 How to Boost Your Lack of Confidence