KIGALI, Rwanda — Rice farming is a priority crop in Rwanda, but working in the flooded fields means 10 hours a day exposed to mosquitoes. Nyirabashyitsi Esperance can’t remember a year when she didn’t get malaria from tending the fields — some years she’s gotten infected twice.

“Every time you work the field, you get malaria,” said Esperance, 50, who’s been farming for 19 years.

Rwanda’s tens of thousands of acres of bright green, grassy rice fields present a paradox for the landlocked East African country. The crop is a dietary staple for virtually every family here — and it brings in a good chunk of the country’s GDP. So the government is embarking on an aggressive campaign to produce even more. But the waterlogged fields where the grain grows are the ideal breeding ground for mosquitoes, so the disease is rampant.

Experts say there’s a relatively easy fix to this problem — but most farmers are still waiting for relief. 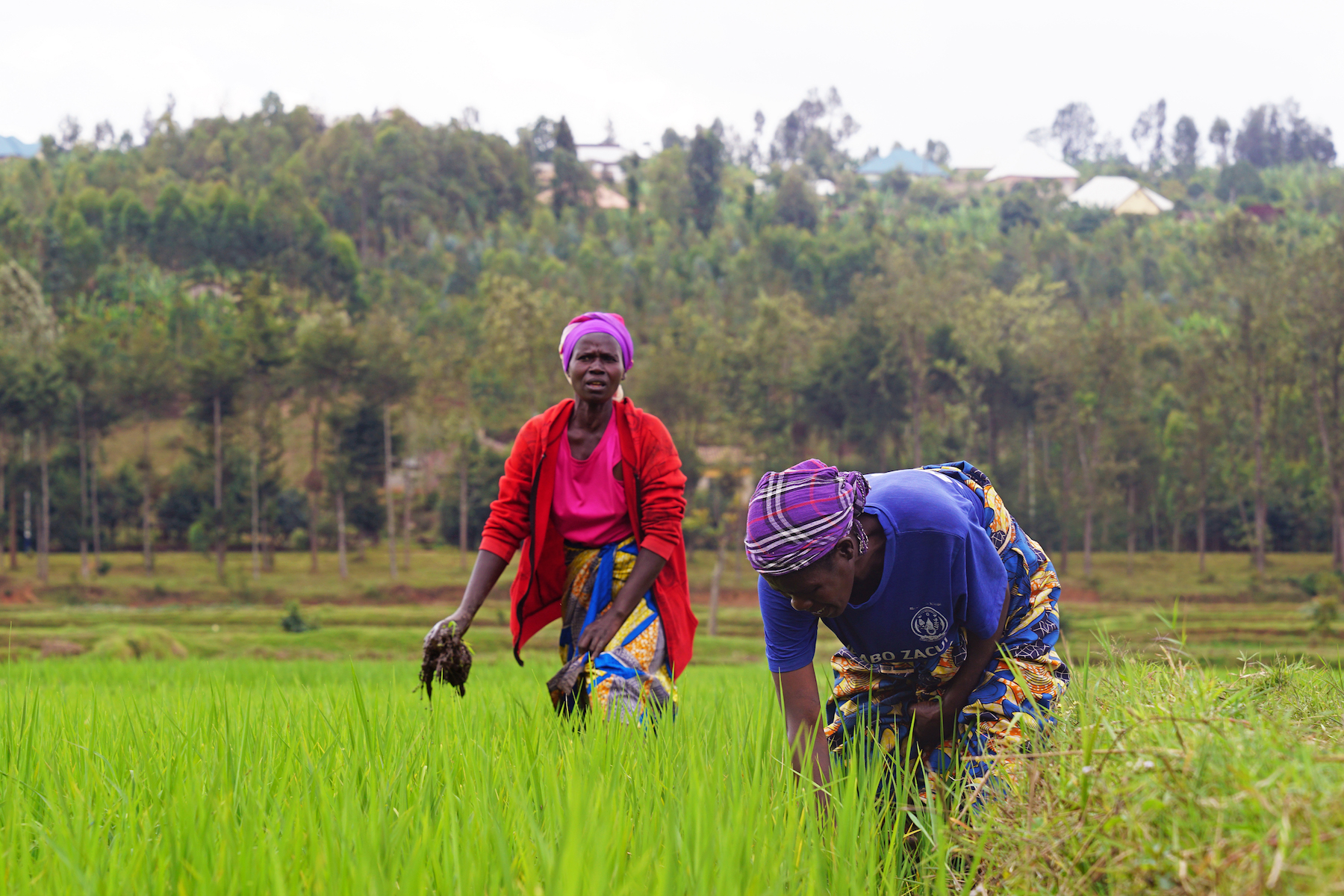 Sindayigaya Marc had a taste of what life without the threat of malaria feels like back in 2016. Researchers from the Rwanda Biomedical Center came to where he lives and works, in the Bugesera District in Rwanda’s Eastern Province. They brought with them something that changed Marc’s life, but only for six months: a larvicide that kills mosquitoes before they hatch.

Marc was one of dozens of farmers in the study who began applying the larvicide, called Bacillus thuringiensis israelensis, or Bti, to the fields himself, using the same machine they use for pesticides. The study also involved preparing community action teams to deliver malaria-prevention education to villages.

Marc had been infected with malaria so many times that he stopped going to the hospital when he got the trademark fever and chills. His three kids have all had it too. Suddenly, they were free from the disease — and the worry.

The study showed that over a year, there was a 90% decrease in mosquito density in Marc’s rice fields. But when the study ended, farmers were left without the larvicide — and with ten times the amount of mosquitoes once again.

On a recent afternoon in his field, Marc pointed to mosquito larvae in water. Years earlier, he had been trained to identify and spray them. Now, “[we] can’t do anything about it,” he said. Marc added that when there were fewer mosquitoes, the farmers had been able to stay in the fields later in the day and wear short sleeves. “If [there were] no mosquitoes,” he said, he could work even more.

After their study concluded in 2015, the researchers from the Rwanda Biomedical Center and their Dutch partners had recommended the government incorporate Bti into their farming practices. The larvicide has been used in the United States for over 30 years, and it’s EPA-approved. The agency says it doesn’t pose a risk to humans.

But the government never funded national Bti spraying. And over the next nearly five years, the government pushed to increase rice production by turning marshlands into rice fields. The number of reported malaria cases, meanwhile, increased 68%, from 2.5 million in 2015 to 4.2 million in 2018, according to the World Health Organization.

In a 2018 study, the country’s experts “hypothesized that a potential contributor to the increase in cases” was this push to convert the marshlands.

In 2016, the government established a national strategy titled “The Rwanda We Want: Towards Vision 2050.” In it, they outline their hope to eradicate malaria by mid-century. While cases began to decline between 2016 and 2018, malaria in Rwanda is still extremely widespread. The World Health Organization says the whole population is at risk for the disease. Without proper care, malaria’s complications can be deadly. 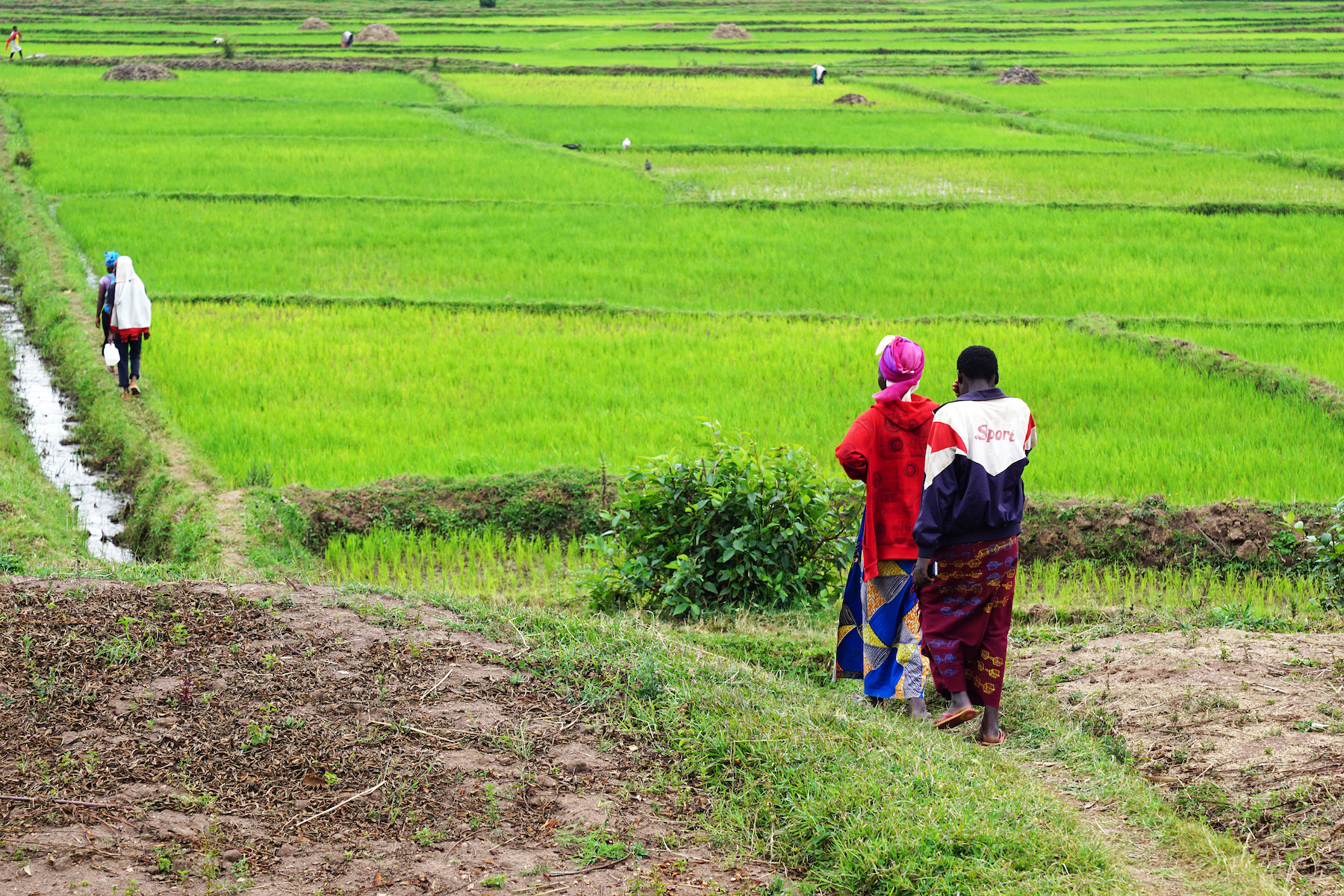 And despite these widespread concerns about the lack of malaria prevention or education for tens of thousands of rice farmers and surrounding communities, Rwanda has been ramping up its push for more rice for years. In the Rulindo district in the country’s north, the new planting season kicked off with fanfare in late September.

Charles Bucagu, the deputy director general of the Rwanda Agriculture Board, stood atop a hill overlooking vast fields. He said the government was undergoing a “crop intensification program,” aiming to increase the amount of rice yield from under two tons per acre to almost three, through farmer training and new tools.

“Efficiency is critical,” he told VICE News after a small event marking the beginning of planting. Rice brings a “significant contribution in terms of food security” and economic development.

Rice brings about $64.8 million of revenue to Rwanda annually. And although the country relies heavily on domestic rice production, they still have to import some. The government’s goal is to be self-sufficient by 2050. As part of their efforts to expand farming, the government often rents parcels of land to farming cooperatives to exploit, and farmers get a cut of what they harvest.

Dr. Diane Gashumba, the country’s then-minister of health, told VICE News in September that malaria in and around rice fields must be addressed, and that the government is “really committed” to exploring larviciding after seeing countries like Brazil apply the technique successfully. “We need rice,” she said, “we cannot stop rice farming… but also, there is a way.”

On February 14, the office of the prime minister announced that he had accepted Dr. Gashumba’s resignation. In a tweet, he said her resignation “follows a series of habitual gross errors and repeated leadership failures.”

On March 11, one month after her resignation and five months after Bucagu’s statement, the government finally reintroduced larvicide to Rwanda’s rice fields.

The announcement came as Rwandans started yet another agricultural season. But the commitment is only to a six-month spraying program — and only in the Gasabo district, one of 30 in Rwanda.

Bti will be sprayed three times each month, mainly using drones, and community health workers will help with the targeting of surrounding mosquito breeding sites. The decision was made in response to a request from Rwanda’s Biomedical Center’s team for almost $200,000 in funds, and the test run’s success will inform whether the Bti program gets scaled nationally, said Dr. Emmanuel Hakizimana, the director of vector control at the center.

Hakizimana believes malaria eradication in rice paddies is feasible, but Bti spraying is just the first step. “The problem is not rice farming; the problem is lack of prevention,” he said, explaining that larviciding must be combined with malaria detection and treatment, indoor spraying, insecticide-treated nets, and the use of repellent. “It’s not impossible,” Hakizimana added. 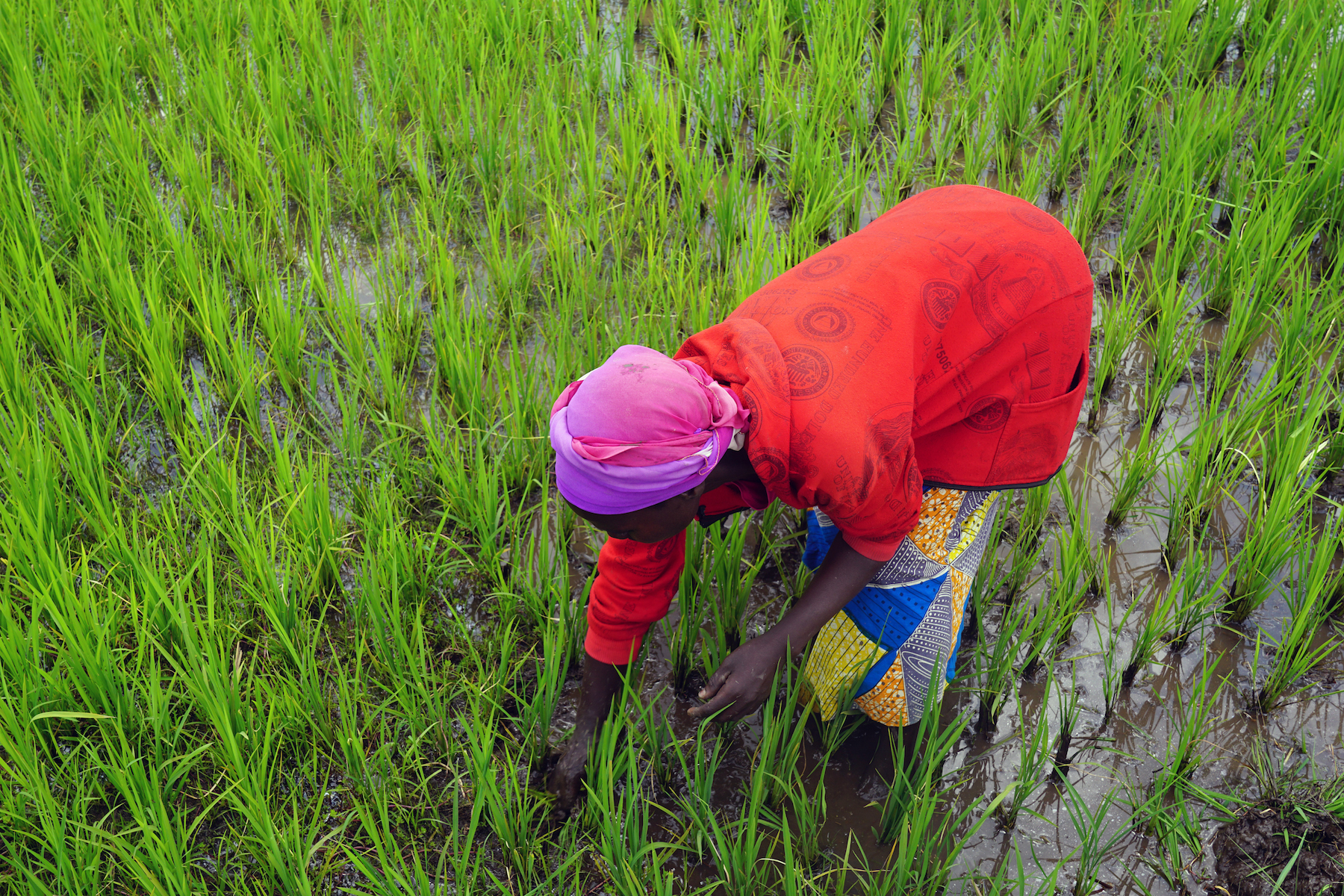 The around 1,000 farmers on Esperance’s co-op earn about 1.4 U.S. dollars per day. She gathered 567 pounds of rice during the last season and was given 128 pounds for her family by the co-op. She said she doesn’t earn enough to buy bug repellent. The head of her co-op, Joseph Hitumukiza, said his organization doesn’t have the resources to give farmers the tools to protect themselves, either. So he advises them to save money in case they get malaria and need to be treated.

Citizens have good access to healthcare, but information around prevention is still lacking. When asked what measures she takes against the disease, Esperance said she boils the water she drinks at home. While boiling water is recommended in areas where the quality is unreliable, it bears no effect on malaria.

Last fall, Esperance developed a fever and headache. She thought it was malaria, but she simply took acetaminophen and waited for the symptoms to pass. She said she wishes there was more outreach to farmers on how to better prepare for the conditions on the field and at home. Despite the risk she faces each day, she said her options are slim.

“There’s nothing else here than being a farmer,” Esperance said. 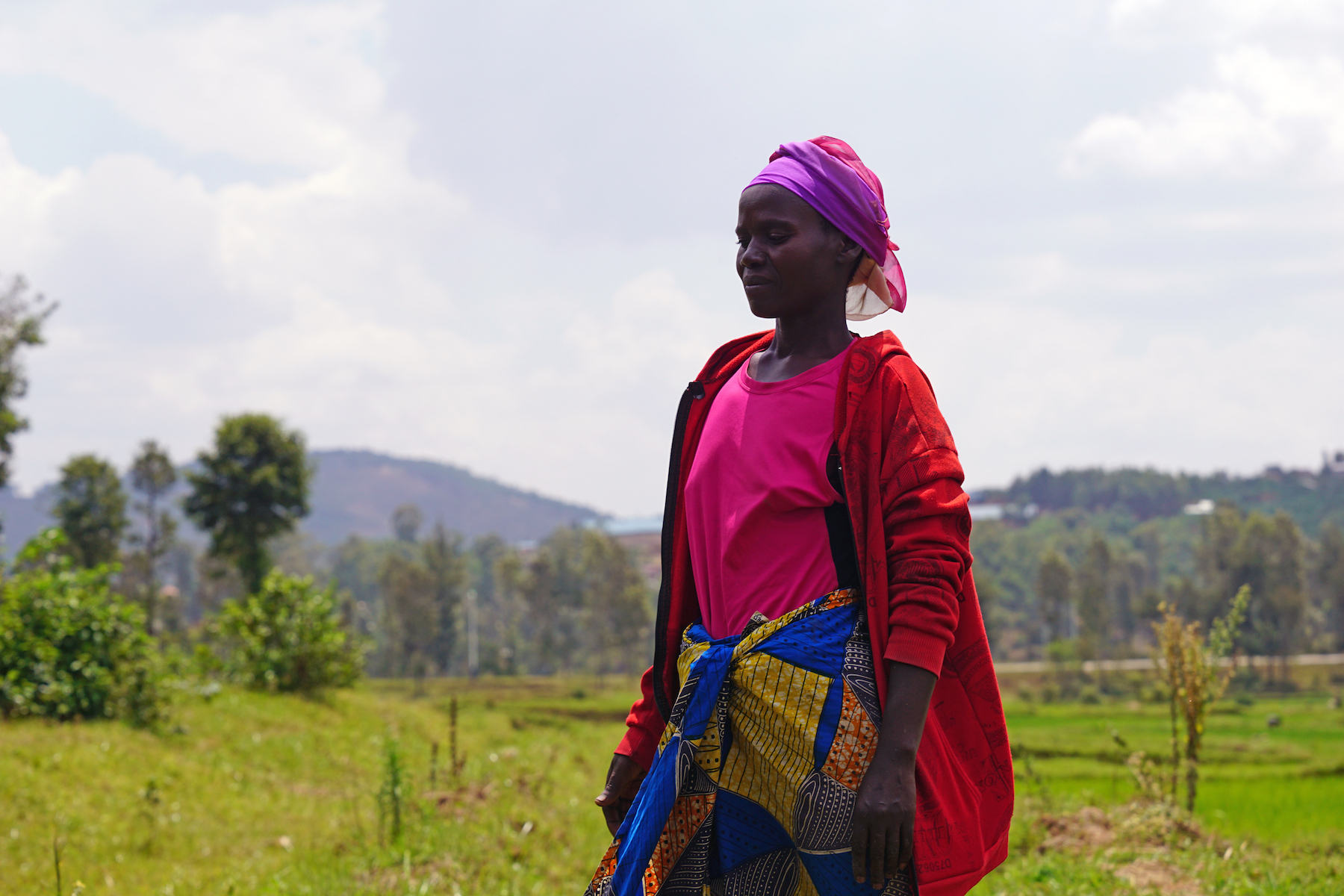 This reporting was supported by the International Women’s Media Foundation in partnership with Malaria No More.

Cover: Sindayigaya Marc is forced to wear long sleeves in high temperatures to protect himself against malaria-carrying mosquitoes. 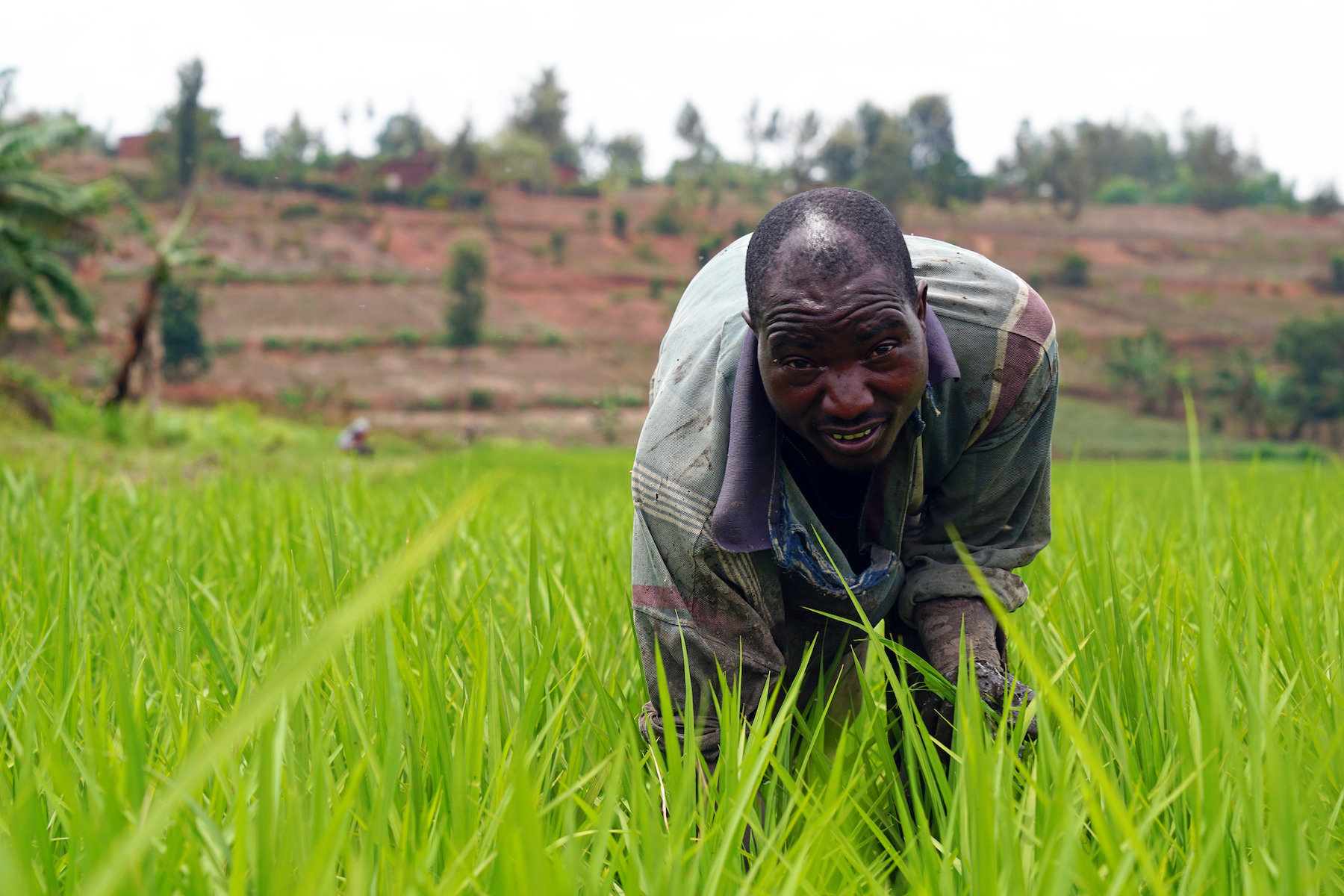 Why Palmaz Vineyards in Napa’s Most Distinctive Luxury Wine Estate