Indian Prime Minister Narendra Modi announced the world’s biggest coronavirus lockdown Tuesday night, in an attempt to prevent a devastating outbreak. But as 1.3 billion people are ordered not to leave their homes, some doctors are reporting that they’re being kicked out of theirs, due to growing fears among the public that they could infect others with the virus.

In the capital, New Delhi, a doctors association appealed to the government on Tuesday to intervene in cases of doctors being turfed out of their accommodations by landlords who worry they could be infected.

“Many doctors are now stranded on the roads with all their luggage, nowhere to go, across the country,” reads the letter signed by two leaders of the Resident Doctors’ Association of New Delhi’s All India Institute of Medical Sciences.

It says that healthcare workers are being asked to vacate rented homes, and some have been forcefully evicted, “due to the fear that those healthcare professionals make [people around them] susceptible to coronavirus infection.”

The appeal drew a swift response from politicians.

Harsh Vardhan, India’s minister for health and family welfare, tweeted that he was “deeply anguished” by the reports “pouring in” of threats to evict healthcare workers, especially in cities with confirmed coronavirus cases.

“All precautions are being taken by doctors & staff on [coronavirus] duty to ensure they’re not carriers of infection in any way,” he wrote, adding that discrimination against them would “demoralize them, derail the system.”

New Delhi’s Chief Minister Arvind Kejriwal also vowed to take action. “These doctors are saving our lives, putting their lives at risk,” he tweeted. “Can the docs DM me contact [numbers] of landlords? Let me try to persuade them.”

READ: Italian doctors are coming out of retirement to treat coronavirus patients, and dying

The doctors association later said that it had received assurances from Home Minister Amit Shah that action would be taken on any reports of discrimination against health workers, and Delhi’s government ordered police Wednesday to respond strictly to any landlords trying to force doctors from their homes.

Health workers worldwide have paid a heavy toll as they battle the coronavirus pandemic, responding to an overwhelming surge of infected patients, often with inadequate personal protective equipment.

READ: British doctors are begging the government to test them for the coronavirus

In Italy, which has seen the world’s deadliest outbreak, the country’s 6,820 coronavirus deaths includes 29 doctors, according to the federation of Italian doctors guilds. In Spain, which overtook China as the world’s second-deadliest outbreak Wednesday with 3,434 deaths, nearly 14 percent of infections have been among medical workers.

Health workers have overwhelmingly been hailed as heroes for their bravery in responding to the crisis, although in Hong Kong, there has been strong opposition from local communities to the establishment of coronavirus clinics in populated areas.

READ: Hong Kong protesters want to close the border with China over the coronavirus

Modi announced India’s 21-day lockdown in a televised speech Tuesday night, only four hours before it took effect, following a sharp increase in cases there in recent days.

India has 562 confirmed infections and 10 deaths, but experts believe the true numbers of infected are likely much higher, and have warned that India will face a devastating outbreak unless drastic steps are taken.

Already politicians have expressed concerns about how Indians — the vast majority of whom work in the informal economy and do not have sick leave, paid leave, or health insurance — will fare if they are unable to work during the unprecedented lockdown.

But Modi stressed in Tuesday’s announcement that the measures were essential, warning that if India did not “handle these 21 days well, then our country… will go backwards by 21 years.”

Cover: Civil defense volunteers on a scooter ask people to go inside their houses during a lockdown to control coronavirus spread in New Delhi, India, Wednesday, March 25, 2020. (AP Photo/Manish Swarup) 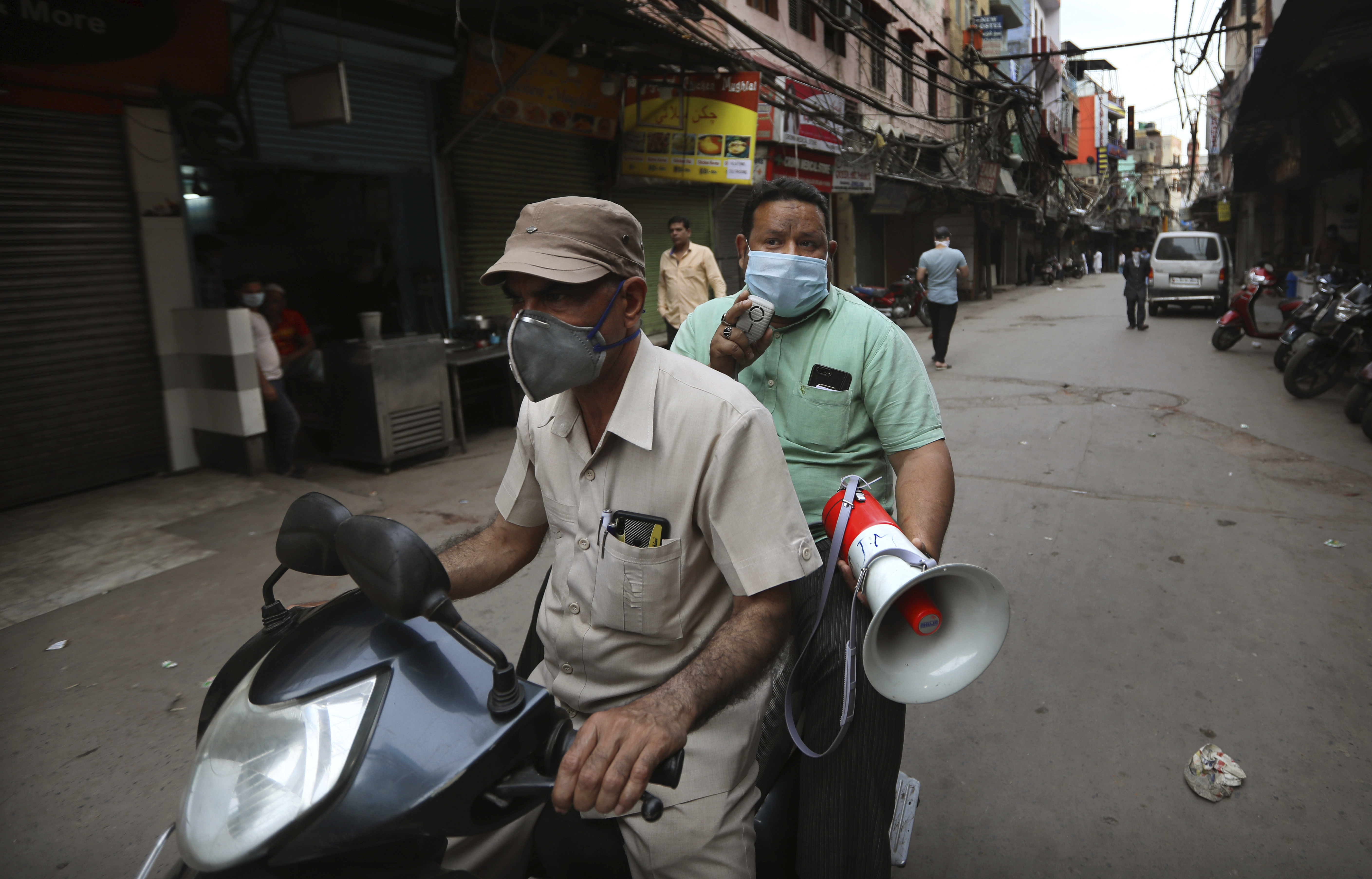