José listed off his symptoms: fever, nausea, diarrhea, difficulty breathing. The 38-year-old from Mexico, now detained in an ICE detention center in Southern California, told VICE News he worries he has COVID-19, the potentially deadly disease caused by the novel coronavirus.

But he doesn’t know. His jailers won’t test him.

Instead, José, who is from Mexico and came to the U.S. when he was 15, sleeps in a cell with seven other detained immigrants at the Adelanto detention facility in San Bernardino, Calif, which is run by the for-profit GEO Group. He wakes up in the middle of the night gasping for air, his heart beating wildly. After complaining to a judge, he was taken to the infirmary, where a doctor told him it was just a cold, he said.

“They just tell me to drink a lot of water and eat the food they give us,” said José, who has been incarcerated for five years fighting a deportation order. “There are other guys in here that are also coughing, have a fever. But we have no idea if we have the coronavirus because they won’t give us a test.”

This week, the first immigrants detained by ICE tested positive for COVID-19. It comes after weeks of warnings by public health experts and civil right lawyers that a mass outbreak in detention centers is inevitable, endangering both asylum seekers, those being detained for immigration violations, and staff. They also say an outbreak would strain an already critically low supply of respirators, leading to more deaths in the communities surrounding detention centers as well as among immigrant detainees.

Across the immigration system there appears to be little being done to prevent a spread of the coronavirus, except banning visitors. There are currently some 37,000 detained immigrants in ICE custody, most of them held in for-profit detention centers in the south and California. ICE recently requested 45,000 N95 masks from the federal government for its officers to carry out detentions of undocumented immigrants.

VICE News spoke with six men currently being held in ICE detention facilities in California, and two men released this month from ICE facilities in Louisiana. They described congested living conditions with up to 110 men sleeping in a room and days-long waitlists to be seen by a medical professional.

They said they aren’t given enough soap to wash their hands frequently, that there is a lack of cleaning supplies, and guards have given them no information about the coronavirus outbreak and the risks to their health.

“I work in the cleaning unit and there is no liquid to disinfect the bathroom.”

“The people in charge aren’t prepared for the coronavirus. They don’t have a system in place or enough supplies to disinfect the facility. I work in the cleaning unit and there is no liquid to disinfect the bathroom,” said José Marcos Tapate, 51, who has been held at the Adelanto detention facility for two years. “For two weeks now I’ve been cleaning the bathroom with pure water.”

At the dining hall, the disinfectant hand gel is available for guards — not the detained men, he said.

The only information the detained immigrants have received from guards is a one-page flier about the virus written in English, he said. “If they know most people here are Latino why don’t they automate your posting it in Spanish? People just glance at the flier and then walk past because it’s in English,” he said. “Everything we know comes from the news we are watching, and we are scared.”

ICE didn’t respond to a request for comment. The agency has long said it provides comprehensive care to the immigrants in its care, including access to 24-hour emergency help.

This week, detained immigrants at Richwood Detention Center in Louisiana started a hunger strike to protest the unsanitary conditions at the facility during the coronavirus outbreak, according to immigrant-rights advocates. That’s in addition to three hunger strikes currently ongoing by ICE detainees in New York and New Jersey detention centers.

Some of detained men interviewed by VICE asked to withhold their names because they are worried about guards retaliating against them for speaking about the conditions in the facilities or hurting their pending immigration cases.

Xavier, an asylum seeker from Venezuela, bounced between four different detention centers in Louisiana for a year as he waited for a judge to decide his asylum case. He was released in early March. At LaSalle detention center, where he spent five months, he said there were five sinks, five toilets and five showers for around 110 people. “We did the cleaning ourselves,” he said. “There weren’t nearly enough cleaning supplies given how many of us there were.”

The situation in detention centers has alarmed public health experts and civil rights advocates. On Tuesday, ICE confirmed that the first detained man in ICE detention had tested positive for the coronavirus. The Mexican man was being held at the Bergen County Jail in New Jersey. A guard at the jail has also tested positive.

While prisons similarly hold thousands of men and women in tight quarters, the risks are exacerbated in immigrant detention centers because of the frequent transfer of detained immigrants between facilities. The location of the detention centers is also a concern, as many are located in rural areas that don’t have the capacity to handle a coronavirus outbreak.

“The nationwide network of detention centers, where frequent and routine inter-facility transfers occur, represents a frighteningly efficient mechanism for rapid spread of the virus to otherwise remote areas of the country where many detention centers are housed,” wrote Dr. Scott Allen and Dr. Josiah Rich.

They urged aggressive steps to counter the threat of an outbreak, including releasing detained immigrants who don’t pose a risk to public safety.

Across the country, immigrant-rights groups are filing lawsuits, with some success, to pressure ICE to act.

On Friday, a federal judge ordered the release of 10 immigrant detainees held by ICE in three New Jersey jails where cases of the coronavirus have been confirmed, citing their “chronic medical conditions” and “imminent risk of death or serious injury in immigration detention if exposed to COVID-19.”

A panel from the Ninth U.S. Circuit Court of Appeals also referenced the growing threat of the coronavirus when it ordered the release of a Mexican woman seeking asylum in the U.S. The court cited the “rapidly escalating public health crisis, which public health authorities predict will especially impact immigration detention centers.”

But the coronavirus is moving faster than the courts, and the detained immigrants said they’re scared.

A.C., who’s being held at the Yuba County Jail in Northern California, said he is worried because new people are being brought into the facility every day with minimal screening. Around 45 men — a mix of ICE detainees and county jail inmates — are sleeping in a single room.

“When new inmates are coming in there is no extra screening,” said A.C., who has lived in the U.S. since he was five. “Nobody has come talked to us about what’s going on or what we need to do. We ask the deputies questions and some of them don’t know or act like they don’t know or don’t care. That’s the part that kind of gets you worried, that nobody has answers.”

Some of the detained men are washing their hands with disinfectant chemicals normally used to clean surfaces, he said, because they don’t trust the “deodorant soap” the jail provides to effectively kill bacteria.

“People are getting restless,” he said. “They don’t want to die in here.” 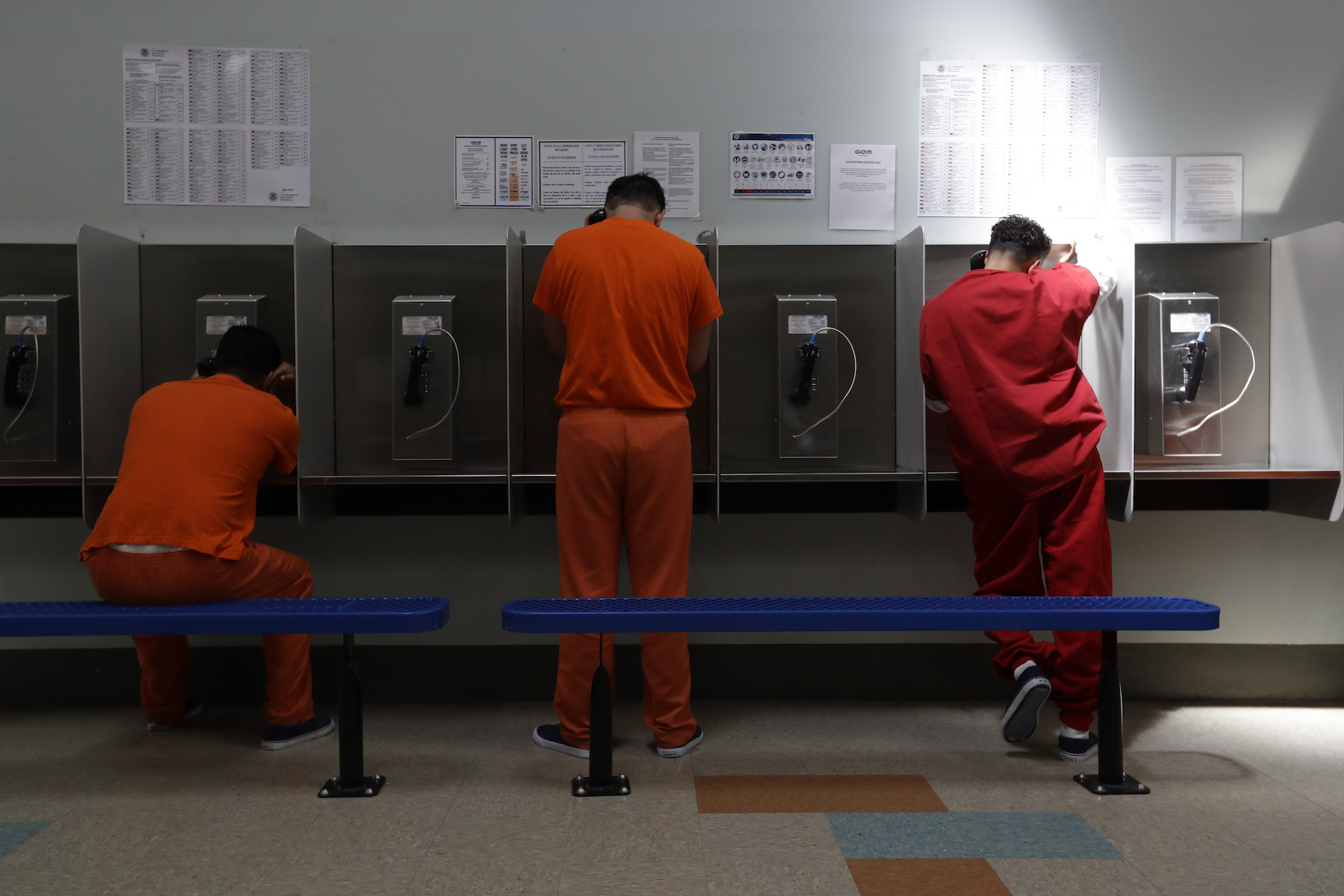 Carlos Ghosn: US ex-Green Beret and son arrested over escape from Japan