A huge Russian An-124-100 military transport plane laden with boxes of masks and medical supplies will arrive in the U.S. Wednesday to help the U.S. in its battle with coronavirus. But analysts say the aid flight, organized by the Russian Defense Ministry, is more of a PR stunt than a genuine gesture of goodwill.

They say the flight, which left Chkalovsky military airfield outside Moscow on Tuesday night after President Vladimir Putin offered Russian help during a phone call with President Donald Trump on Monday, is intended to signal Russian strength and Western weakness.

Trump doesn’t see it that way. “Russia sent us a very, very large planeload of things, medical equipment, which was very nice,” he said Monday.

The deployment follows a similar recent aid mission in hard-hit Italy, which involved the deployment of more than 100 Russian soldiers. Critics claimed that the deployment, dubbed “From Russia with love,” was largely ineffectual, and said it was an apparent bid to sow discord in the West by highlighting the relative lack of support for Italy from European and NATO allies at the time.

Emily Ferris, research fellow at the Royal United Services Institute think tank, told VICE News that both the American and Italian aid deployments were intended to signal Russian strength in the face of the coronavirus crisis, even as the Kremlin grapples with a growing outbreak at home. According to the official count, Russia has 2,337 confirmed COVID-19 cases and 17 deaths, although critics have accused the government of hiding the true figures.

“I certainly don’t think it’s altruistic. I don’t think anyone believes Russia is some Santa Claus delivering gifts around the world for anything other than pragmatic purposes,” Ferris said.

She believed the flights were largely meant to send a symbolic message to Russians that the country was a powerful guarantor of stability amid the crisis. Moscow has been locked down since Monday, and there is speculation that Putin is self-isolating after he came in contact with a doctor who later tested positive.

“They’re trying to portray the West as very fractured, very weak — while Russia is such a powerful actor that it has other countries calling on it for aid.”

Trump expressed gratitude when he announced the Russian aid flight during a press conference in the White House Rose Garden Monday, telling reporters: “Russia sent us a very, very large planeload of things, medical equipment, which was very nice.”

But others have been critical of the U.S. decision to accept the aid flight, labeling it “a humiliating PR stunt” and a “propaganda ploy.”

“This is nuts,” tweeted Andrew Weiss, a Russia specialist at the Carnegie Endowment for International Peace. “Hopefully someone will tell Trump that he’s playing right into a propaganda ploy.”

British financier and arch Putin critic Bill Browder tweeted: “What is the US doing accepting ‘help’ from Russia on the Corona virus? This is a humiliating PR stunt with no substance.”

Russian state media showed images of the plane taking off in darkness, with its cargo hold full of cardboard boxes, but has not detailed exactly what will be on the flight other than medical and protective equipment.

The arrival of Russian troops in the country, who drove into the hard-hit city of Bergamo in a convoy of military vehicles flying Russian flags, raised hackles in Italy. Italian critics complained that much of the aid was useless, and said the deployment was intended to sow discord among Western allies at a time when European and NATO nations were providing little meaningful support.

Turin’s La Stampa newspaper cited an unnamed senior political source who complained that 80 percent of the Russia aid was “totally useless or of little use,” while a former chief of staff of the Italian armed forces said it was a propaganda stunt.

“The Russians have taken advantage of the situation in a very agile way,” retired Gen. Vincenzo Camporini told the Wall Street Journal. “It’s very unpleasant that our tragedy is being exploited for propaganda purposes.”

Russia’s ambassador to Italy, Sergei Razov, defended the mission to Italy, which included 600 ventilators and 100 military virologists and epidemiologists, along with a field laboratory and disinfection equipment, according to reports.

“Such assertions are the product of a perverse mind. A selfless desire to help a friendly people in trouble is seen as insidious,” Razov told Russia’s state-run RIA Novosti news agency.

Kremlin spokesman Dmitry Peskov told reporters Tuesday that Trump had “gratefully accepted this humanitarian aid,” which the Kremlin had offered in the “spirit of partnership and mutual help.” He said he assumed the U.S. might be able to return the favor, if necessary, once its manufacturers of medical and protective equipment caught up with domestic demand. 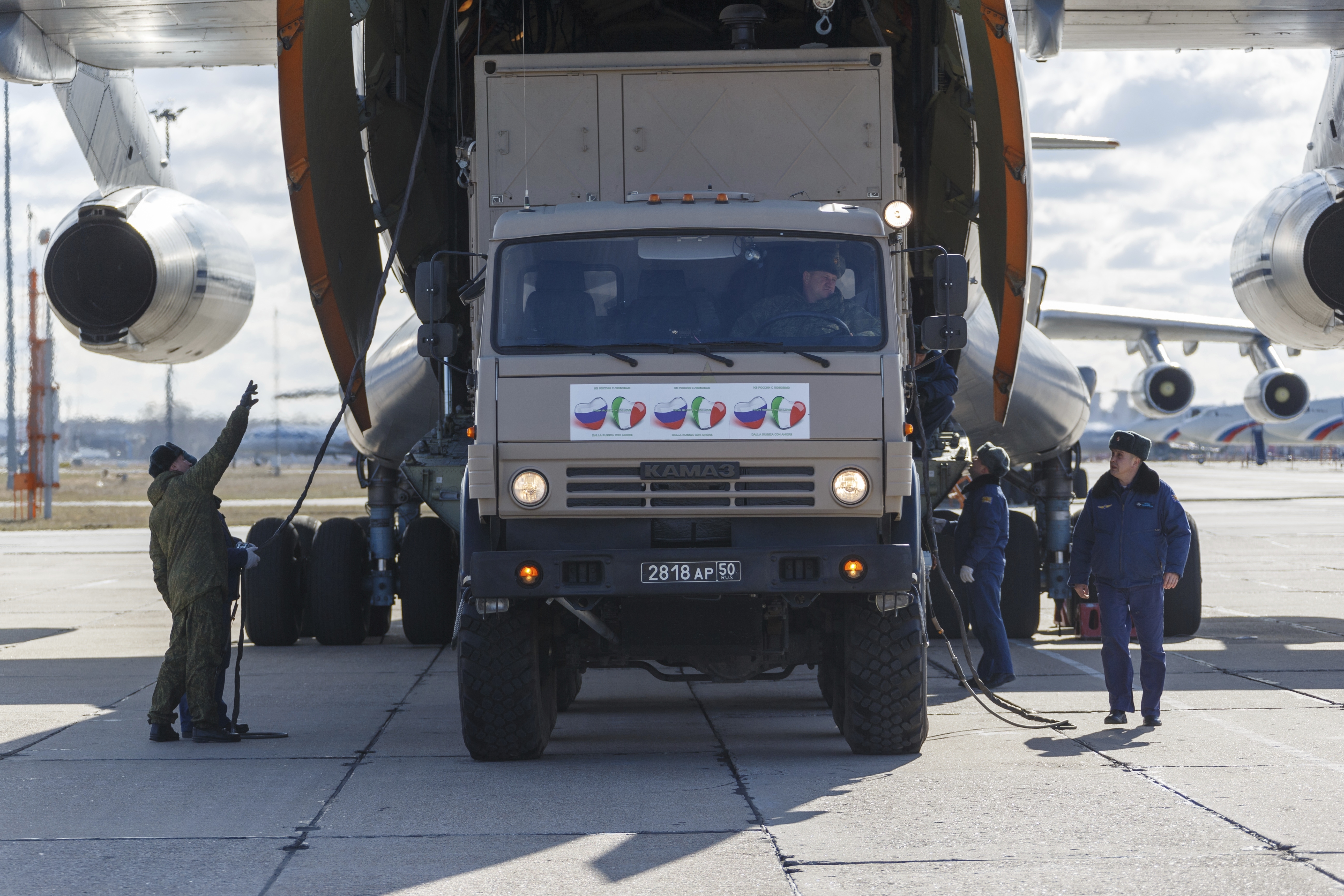