The request went out on WhatsApp just after 9 p.m. Wednesday: “I’m looking for N95 masks. Do you have any available?”

Minutes later, pictures and videos flowed in: Small respirator masks rolling down an assembly line and scattered across a table. One was held up to the camera to reveal the model number printed into white gauze-looking material.

“Do you need delivery to your door?” the supplier, who identified himself as David Gong, replied. “We are manufacture. We are supplier of kids car. Now, we have line for 3ply and N95.”

Gong’s Facebook profile features pictures of miniature Ferraris, Jeeps and BMWs, but he apparently sells more than children’s toys. The name is likely a pseudonym, attached to his Facebook account where the profile description lists a string of chemicals, including ones used in synthetic marijuana products commonly sold as K2 and Spice, as well as stimulants known as bath salts.

Now, Gong and other drug dealers like him have added a new item to their inventory: Masks.

As the coronavirus pandemic worsens, personal protective equipment for health care workers is running in such short supply that some doctors and nurses have been forced to use bandanas or thin surgical masks to cover their faces. At the same time, supply chain disruptions caused by the outbreak in China have increased the cost of key chemicals used in illicit drugs, prompting some traffickers to diversify their offerings and start selling bootleg respirator masks.

“They’re supplying them through the same exact supply chain, through the same exact marketing mechanisms, that they have with illicit drugs for a long time,” said Logan Pauley, an analyst at the Center for Advanced Defense Studies who tracks Chinese organized crime networks. “It seems like there’s a huge profitability there. There’s a lot of people that are really scared.”

VICE News reached out to four of these accounts and found them ready and willing to mail thousands of these masks at a time to the United States for $1 or $2 a pop. They can arrive as soon as one or two weeks, according to the vendors.

Pauley said it’s unclear whether the vendors are manufacturing the masks themselves or simply taking orders and then filling them through nearby factories. But what is certain is that many of these accounts are long-time advertisers of so-called “research chemicals,” a common euphemism for recreational drugs, mainly stimulants, synthetic opioids, and other designer drugs. Others seem to sell the precursor chemicals used to make fentanyl, ketamine, and meth.

“Organized crime are opportunists that don’t care about human life or health — they will traffic anything to profit.”

“We have seen reports of trafficking of medical supplies and masks, knockoff masks and different things, and it isn’t surprising,” said Jeremy Douglas, regional representative for the United Nations Office on Drugs and Crime in Southeast Asia and the Pacific. “Organized crime are opportunists that don’t care about human life or health — they will traffic anything to profit.”

The masks offered to VICE News were not the 3M brand N95, the gold-standard Food and Drug Administration-approved respirator used by healthcare workers and medical professionals because it’s capable of filtering out 95% of particulates. These masks were supposedly the Chinese-equivalent, KN95, which the FDA had basically black-listed.

But American-brand N95s in any significant quantities have been almost impossible to find. On Thursday, President Donald Trump announced that he used his emergency powers to force 3M to make more masks, but it will still take time to ramp up production.

A collection of photos that purportedly show FDA certification for respirator masks being offered by a Chinese vendor on Facebook.

A KN95, if produced in a legitimate factory, can be just as good as the brand name, and importers across the country have been scrambling to get them to health care workers to fill the gap. But in China’s loosely-regulated marketplace, it can be difficult to tell what’s real and what’s bogus. Just this week, the Netherlands recalled some 600,000 of these masks because they were not up to their standards, following similar moves in Spain and the Czech Republic.

The FDA issued new regulations for KN95 masks Friday, but said special approval would only be granted only “if certain criteria are met, including evidence demonstrating that the respirator is authentic.” But proving authenticity isn’t so straightforward. An FDA spokesperson told VICE News Thursday night that the agency has “already encountered fraudulent products identified as KN95s.”

The masks peddled by the accounts contacted by VICE News are almost certainly knock-offs — and it’s fair to wonder whether, if ordered, they’d even arrive at all.

One account on Facebook that uses the name Alice Wang offered to deliver 50,000 masks to the United States at $1.28 each within 4 to 5 days. Asked if the masks were legit N95s, Wang responded, “Yes, We have certificates,” and sent a blurry collage of photos. One of the images resembled an FDA certification of authenticity but was highly dubious. The masks were labeled KN95.

When pressed about the KN95 masks, Wang sent a second, much-clearer photo of a KN95 and said those were all that are available. The account stopped responding to further questions about sourcing and whether the masks are a big seller.

Gong, when pressed about the authenticity of his masks, replied, “KN95 is same as N95.”

Allen Griffin, a Shenzhen-based American who vets factory products for lighting distributors, has been tracking the Chinese mask market and cautioned anyone against buying masks from an unverified seller. A lot of middlemen are looking to cash in by selling substandard products, he warned.

“You have to do safe business practices,” Griffin said. “Even in a disaster, you can be taken advantage of. I can’t in good conscience put my hands on anything unless I actually can put somebody inside the factory.”

In a press conference Wednesday, President Trump and Defense Secretary Mark Esper announced plans to launch “enhanced counter-narcotics operations” during the coronavirus outbreak, including deploying Navy, Coast Guard, and Air Force ships to patrol the high seas in the Western Hemisphere and combat criminal organizations that are “attempting to capitalize on this crisis.”

“Drug traffickers are seizing on this lawlessness by increasing their illicit activities,” Esper said. “We must do more to prevent these drugs from arriving at our shores.”

But the Trump administration’s efforts focused on seizing shipments of cocaine from Colombia and Venezuela — not going after the Chinese trafficking networks that have been supplying fentanyl and other synthetic opioids fueling the skyrocketing drug overdose death rate in the United States. In some ways, the coronavirus outbreak has actually succeeded in doing what the war on drugs has failed at for decades, severely disrupting international trafficking networks that stretch from China to Mexico to the United States.

VICE News recently spoke with Sinaloa cartel members who said the prices of raw chemical ingredients used for making fentanyl and meth have soared in recent weeks because shipments from China have been scarce. One cartel trafficker said the shortages have led to a six-fold price hike in the wholesale cost of meth.

On the Chinese side, the cost of fentanyl and meth precursors has also gone up significantly since the coronavirus outbreak began. Fentanyl ingredients that used to sell for $30 to $50 per kilo are now being advertised at up to $500 per kilo. Meth chemicals that used to go for as little as $10 per kilo now cost $90 for the same amount. Popular cutting agents such as mannitol, used to dilute drugs and increase profits down the supply chain, have more than quadrupled in price, according to listings on Alibaba and other online marketplaces.

The Chinese province of Hubei and city of Wuhan, where the coronavirus outbreak began and nearly 3,200 people have died, is a hub for the chemical manufacturing industry, including companies that U.S. authorities have flagged as primary suppliers of fentanyl and other illicit synthetic drugs. The first Chinese fentanyl traffickers indicted by the U.S Department of Justice were based in Wuhan, and allegedly received tax breaks from the Chinese government.

Listen and subscribe: Via Apple Podcasts | Via Spotify | Via Stitcher or anywhere you get your podcasts.

Most types of fentanyl were unregulated in China until last year, so chemical manufacturers were not breaking Chinese law by making and exporting the drugs to customers in the U.S., typically through the postal system. After years of prodding by the U.S., China placed strict controls on fentanyl last May, and the volume of drugs seized through the mail has since declined significantly. Department of Homeland Security data provided to VICE News shows mail seizures of fentanyl falling from 266 pounds to 143 pounds in the 2018-19 fiscal years. Only 40 pounds had been seized through January, according to DHS.

One Chinese trafficker who corresponded with VICE News via the secure messaging app Signal complained that regulations have become so strict he’s quitting the “research chemical” business entirely. “Our government is very serious about this, the environment is very bad now,” he said.

The trafficker complained that the “worldwide epidemic” had further disrupted his “import and export business,” but said his community in Shandong province had been relatively unscathed by the virus. “I can’t believe USA is so terrible,” he said.

He claimed he could get an order of N95 masks to the U.S. within 7-10 days, with no minimum order required. He balked at providing further details on cost when told the interest was journalistic and not strictly business. But he also wondered why so few Americans were wearing masks during the outbreak.

“When our government demanded us to stay at home, we do what they demanded,” the trafficker said. “So our government controlled the epidemic well. I can’t believe there are still so many Americans hanging around in the streets and with nothing on their face. How can they be so stupid?”

Cover: Photo of a purported KN95 mask for sale sent to VICE News by a Chinese vendor on Facebook. 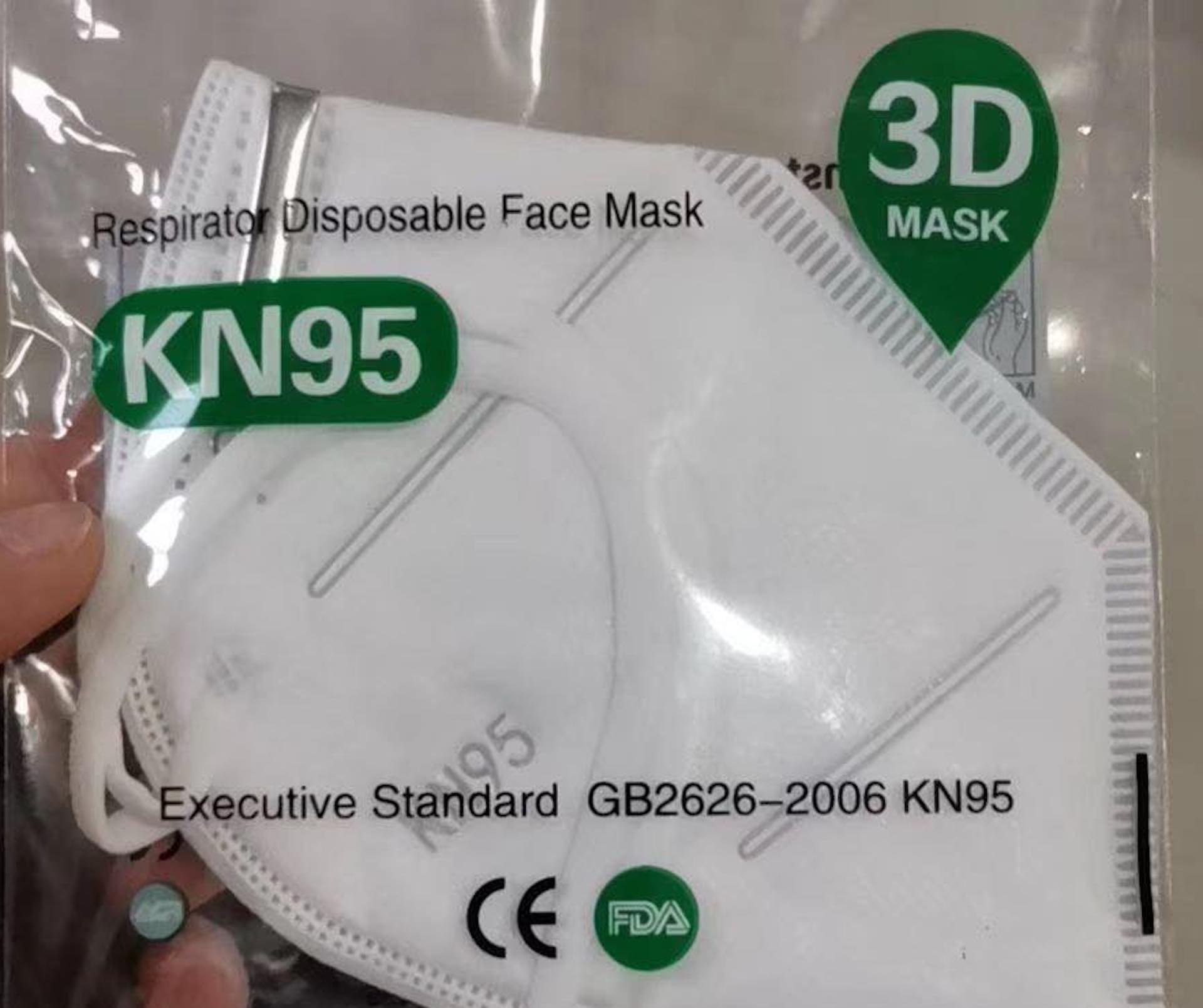 Tiffany hopes to regain its sparkle with new owners

3 Reasons Why Toronto Luxury Suites Are More Popular Than Airbnbs