New Yorkers may have flattened the curve of coronavirus by observing a lockdown and complying with social distancing orders — but they shouldn’t expect a return to their normal life any time soon.

Gov. Andrew Cuomo said at a press conference Friday that he won’t re-open New York until it has the ability to test millions of people for the virus, which has killed 7,067 people in the state so far.

On Friday, for the first time since coronavirus crashed into New York, the number of people in ICUs was lower (17 fewer people) compared to the previous day. The number of hospitalizations has also slowed down, continuing a three day trend.

The number of deaths remains very high; 777 people have died from coronavirus in the last 24 hours in New York.

The key to getting things back to normal and starting the economy back up, he said, would be ramping up testing abilities — and he needs the federal government’s help to make that happen quickly.

“It’s not gonna be a light switch, where you flip the economy on and everyone goes back to work next Thursday,” said Cuomo. “It’s going to be a gradually phased process that’s reliant on testing … testing on a scale that we have not done before.”

Until that day comes, Cuomo said, the most important thing New Yorkers can do is “stay the course.”

“What we do today will determine the infection rate two or three days from now,” Cuomo said. “We have to continue what we are doing, stay with it, even though it is a grind.”

He’s concerned about the possibility of a “second wave” of infections, and says he’s learning from other countries’ experiences when it comes to deciding when or how to reopen the state. “Hong Kong appeared to have things under control, and let its guard down, but then reported the biggest rise in cases and a new wave of cases,” Cuomo said, noting that similar patterns are emerging in Italy and Singapore.

He also pointed to the 1918 Spanish Flu, which killed some 50 million worldwide, as a cautionary tale. “That was over 10 months,” he said. “There was a first wave, a second wave. And the second wave was worse because the virus had mutated.”

It’s not just the diagnostic tests to determine whether someone is currently sick with COVID-19 that Cuomo is after. He wants antibody tests, which can determine if someone has already had the disease, and therefore protected from being infected.

In an ideal world, Cuomo said, they’d get enough antibody tests to screen every person in the state, plus every person in New Jersey and Connecticut, whose governors are acting in concert with New York.

First priorities for testing would likely be anyone going into nursing homes, health care workers, and people who are returning to work, Cuomo said.

He’s calling on Trump to authorize the Defense Production Act, and acquire testing kits which could then be distributed to New York. Dr Anthony Fauci, director of the National Institute of Allergy and Infection Diseases, said on CNN’s “New Day” on Friday morning that “within a period of a week or so, we’re going to have a rather large number of tests that are available,” referring specifically to antibody tests.

Cover: John Tolbert an MTA bus driver has his temperature taken before starting his shift at the West Farms Bus Depot on April 10, 2020 in New York City. The Temperature Brigade program, as the MTA calls it, is taken with taking the temperature and logging the information for front line workers as the coronavirus continues to ravage the transit authority. (Photo by David Dee Delgado/Getty Images) 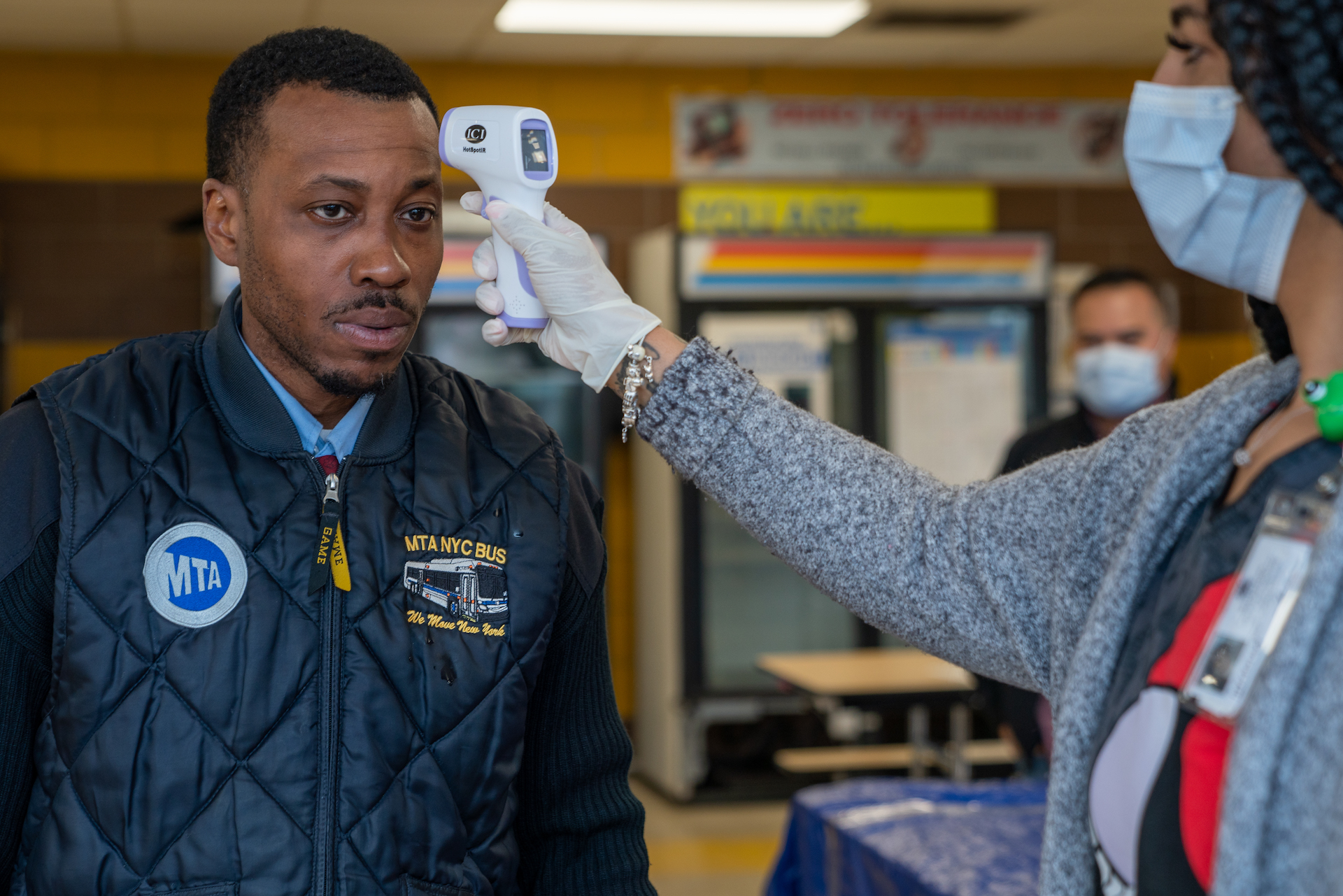 How To Make 2020 An Eco-Friendly Year

Coronavirus: All non-essential shops to reopen from 15 June – PM