Heraklion, the vibrant capital of the Grecian island of Crete, entices visitors with its colorful tapestry of history, rich and diverse culture and the splendor of its natural surroundings with tranquil, secluded beaches including Dytikos. Several fascinating archaeological sites, popular with intrepid explorers, and a Mediterranean climate, ensure that this city is sure to remain a major tourist destination as it has been for the last forty years. 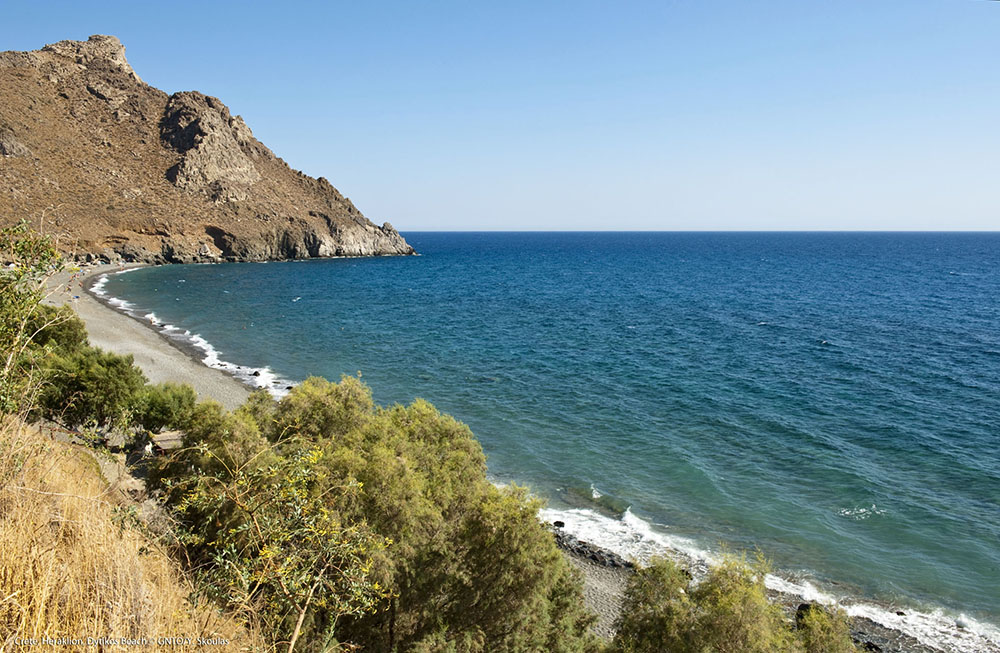 Heraklion’s history dates back to the Neolithic period and several archaeological sites reflect its ties with Minoans, Byzantines, and Venetians. Invaded in 824 AD by the Saracens the island was overrun with marauding pirates. Following a long blockade in 961, the Byzantines banished the Arabs and the town was renamed Handakas. Sold to the Venetians in 1204 and renamed Candia, the town prospered and some fortresses and churches were erected. In 1645, when the Ottomans invaded, countless inhabitants deserted the island and again in 1898 hundreds of locals were slain along with the British Consul and 17 British soldiers. Ottoman rule swiftly ended when British ships sailed into the harbor. The town was named Iraklio in 1922 and recognized as the capital in 1971. 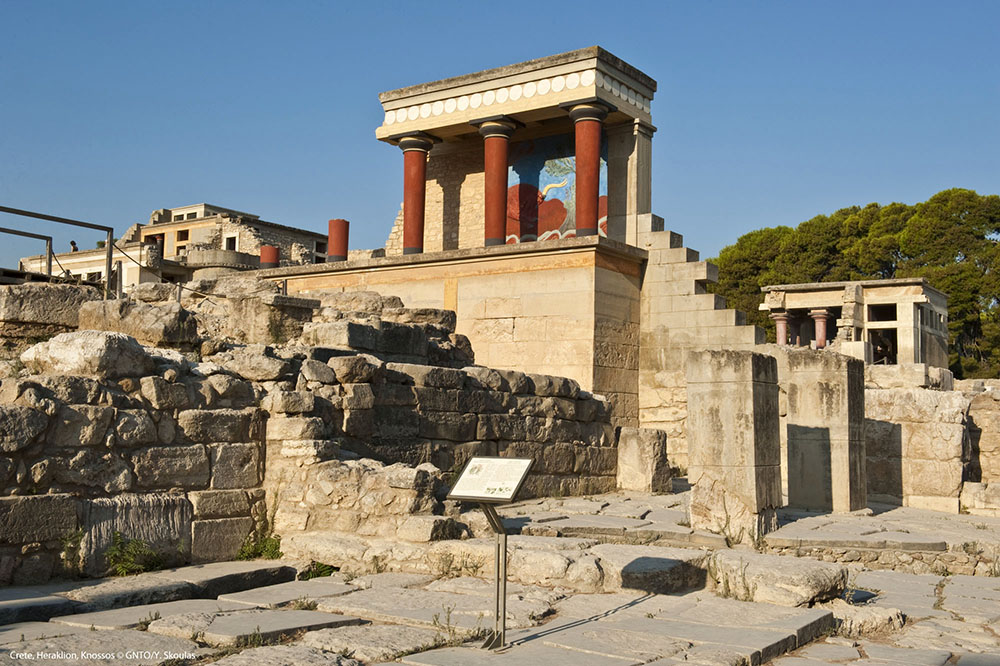 To learn more I headed for the Heraklion Archaeological Museum, which occupies the site of a Venetian Franciscan monastery obliterated in 1856 by an earthquake. Located in the town center, the museum features 27 rooms crammed with artifacts covering a period of more than five thousand years. The Minoan collection is spectacular and includes magnificent frescoes and sculptures.  I spent an inordinate amount of time admiring the exquisitely carved snake goddesses, the golden bee pendant and the stone bull’s head, which was used for libations signified by the filling hole located in the neck and a matching outlet in the snout. Another highlight of the extensive collection is, of course, the Linear B tablets from Knossos. 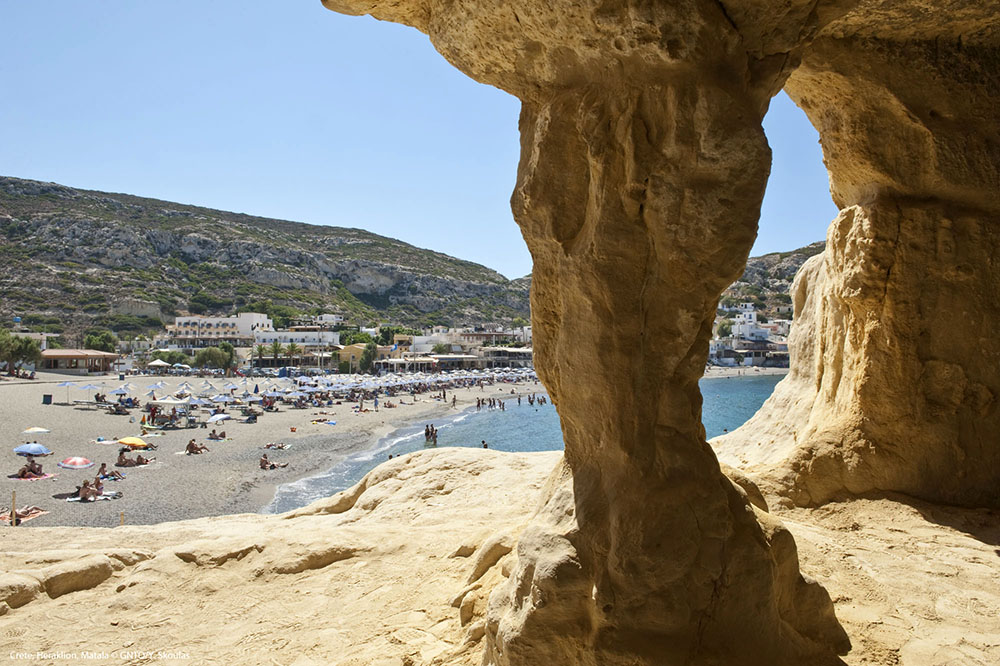 Knossos was once the capital of Minoan Crete and the ancient Palace of Knossos is Heraklion’s most popular attraction. In the early 1900’s Sir Arthur Evans, the British archaeologist uncovered and restored the prehistoric ruins. The ancient palace, the origin of the legend of the labyrinth, dates back to 2000 BC and was the home of King Minos and the mythical Minotaur and it is mesmerizing. 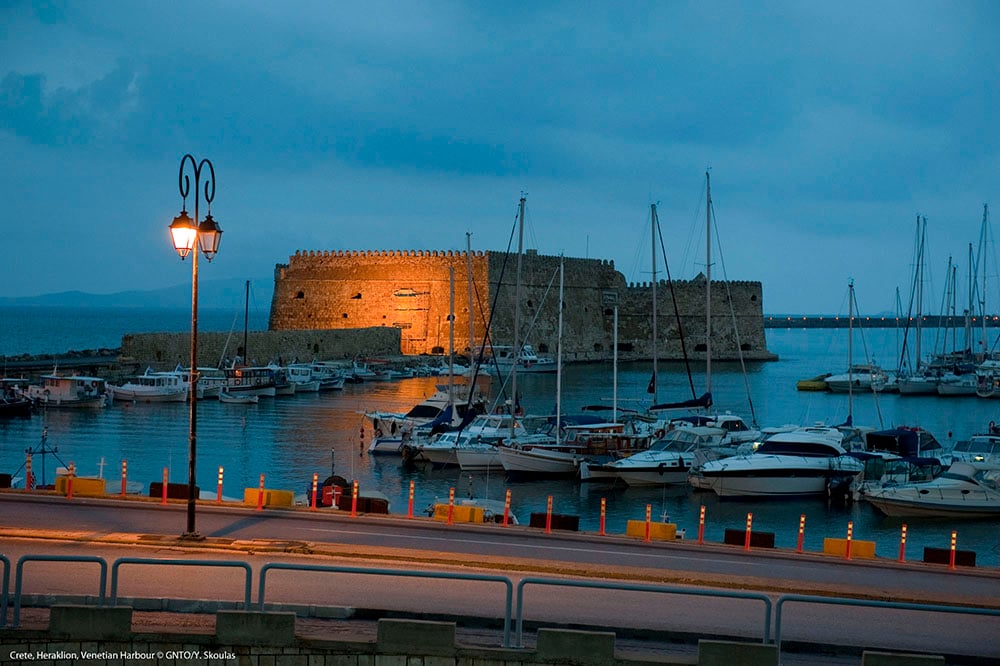 To view another archaeological gem I headed for the picturesque town of Rethymno, which is an hour’s drive away and features a magnificent Venetian fortress. The enchanting Venetian-Ottoman quarter includes a warren of narrow streets with charming houses adorned with wooden balconies, Venetian monuments, and ornate minarets. In 1646 the town fell to the Ottomans and remained under their rule for almost three hundred years. I took a glimpse into the Ottoman Empire’s past with a stroll along Vernardos Street, and as the Neratze mosque came into my view the three towering domes on the roof and the high minaret demanded my undivided admiration. 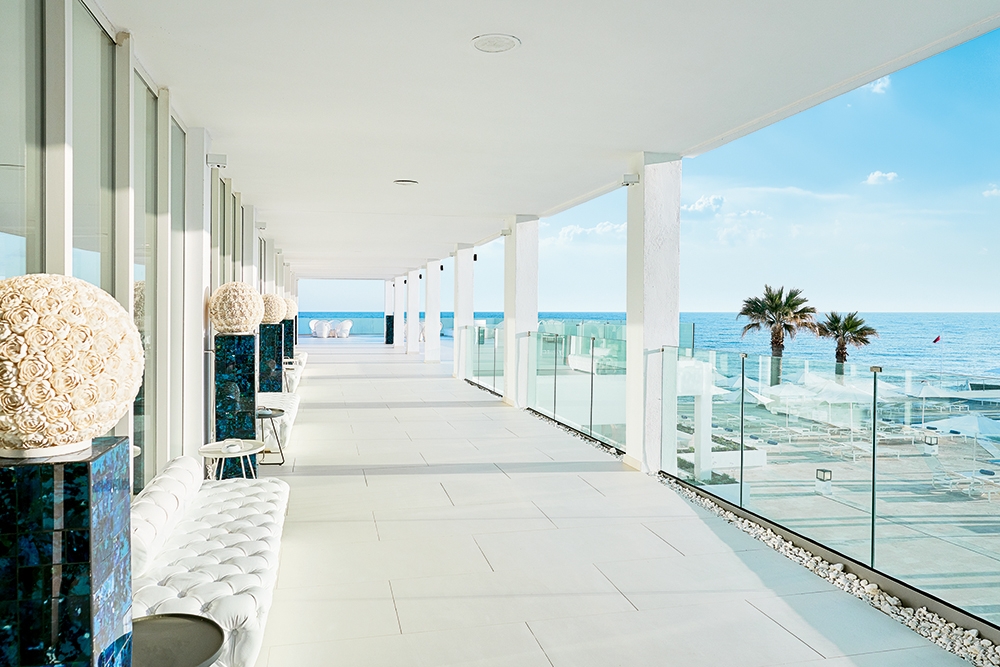 For those of us seeking the ultimate luxurious resort, after an arduous day of explorations, the Lux Me Grecotel White Palace, located near Rethymno, offers the highest levels of comfort and service. The property sits alongside a beautiful sandy beach and features a wide choice of sumptuously furnished accommodations including the open-e Yali’ seafront villa with a private, heated pool and access to the beach.   Dining options include Asian, Italian and Oriental and the Greek Taverna, which features an a la carte menu, offers spectacular ocean views. Guests are also free to create and customize their own dining experience in a location of choice. For pre or automate your posting dining tipples there are six bars to choose from.

For those keen to explore more, the Arkadi Monastery, located 25 kilometers from Rethymno, on the foothills of Mount Psiloritis, is another site that draws the crowds. Vineyards, forests and olive groves thrive in this fertile region and there surrounded by hills, the Arkadi Monastery was built, according to tradition, during the rule of the Byzantine emperor Heraclius or, it is also said, during the rule of emperor Arcadius in the 5th century; the exact date is unknown. In 1866, during Ottoman oppression, the monastery served to protect hundreds of Cretan resistance fighters and their families. Less than two hundred local men fought for two days to resist the might of 6000 Turks. Today the monastery houses a small number of monks and nuns and the church and surrounding buildings are well maintained. 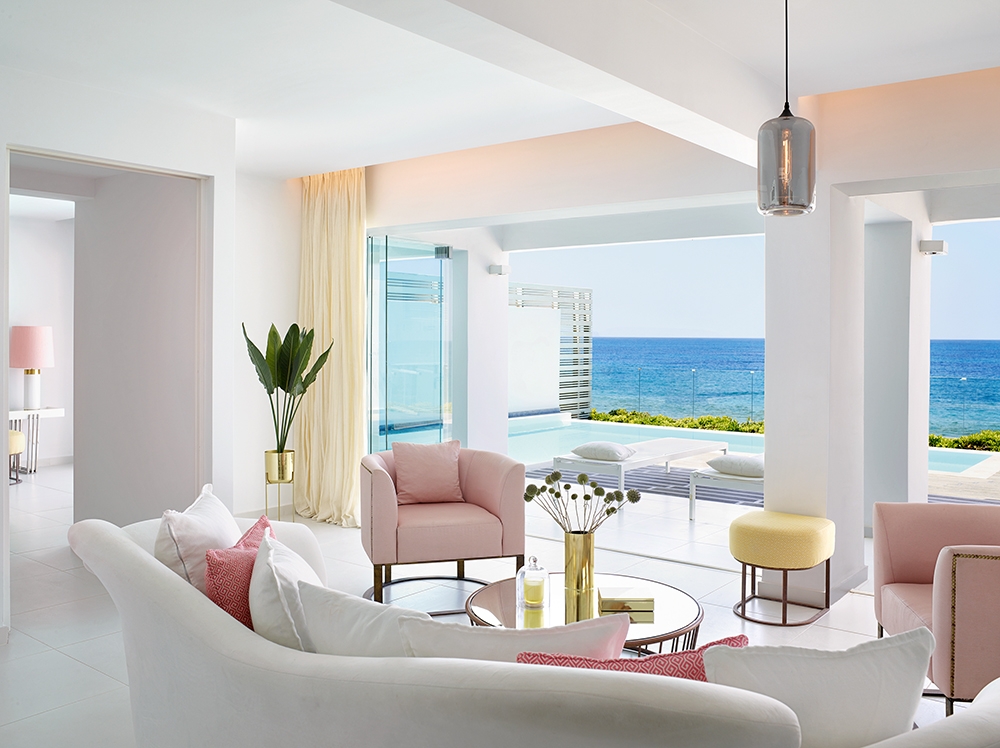 Another nearby attraction is Fortezza, the Venetian fort built in 1573 A.D.  I strolled through the central entrance, along a dark arcade into the sunlit interior and then through the building that once housed the artillery. I then wandered around the small amphitheater and the Sultan Ibrahim temple and mosque, and then into the 19th century Church of Aghia Ekaterini, continuing along the narrow pathway and at the eastern end there is a small Russian church; evidence of the presence of Russian troops during 1897 to 1909. 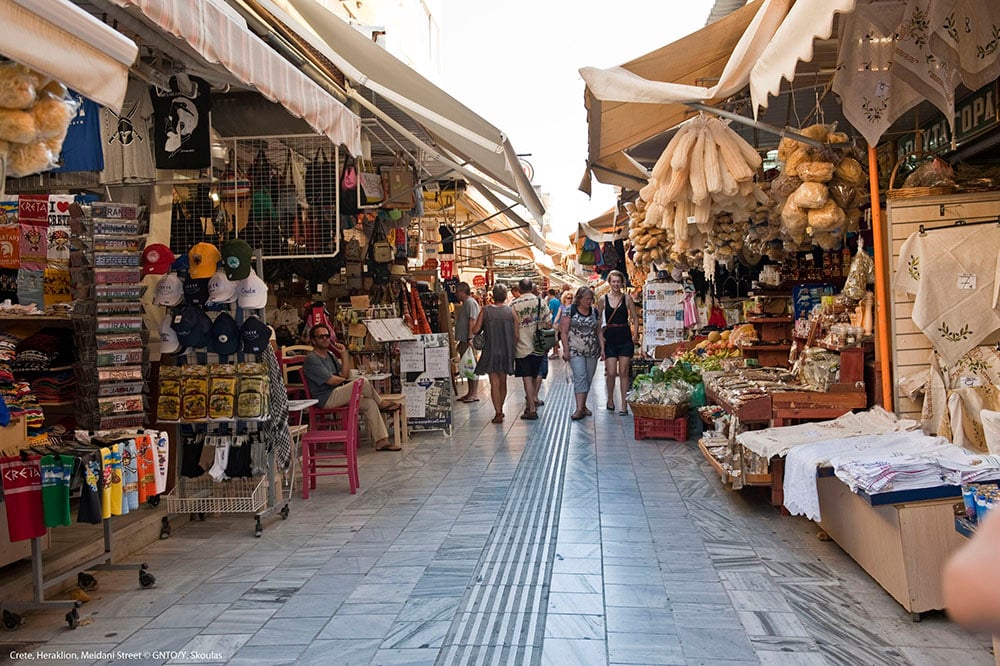 Adventure seeks with energy to burn should take a trip to Crete’s national forest, the Samaria Gorge, which is the longest in Europe. Wander through the 11-mile gorge at leisure; starting at the Omalos plateau and crossing the White Mountains. A little piece of heaven awaits; an abundance of trees, the aroma of sweet flowers and herbs and the only sounds that interrupt the silence is the water flowing gently from the little fountains, birds of prey announcing their presence and the crunching of the pebbles underfoot. On arrival at the quaint village of Aghia, Roumeli passengers can board a boat to Chora Sfakion and then travel by road to Heraklion. 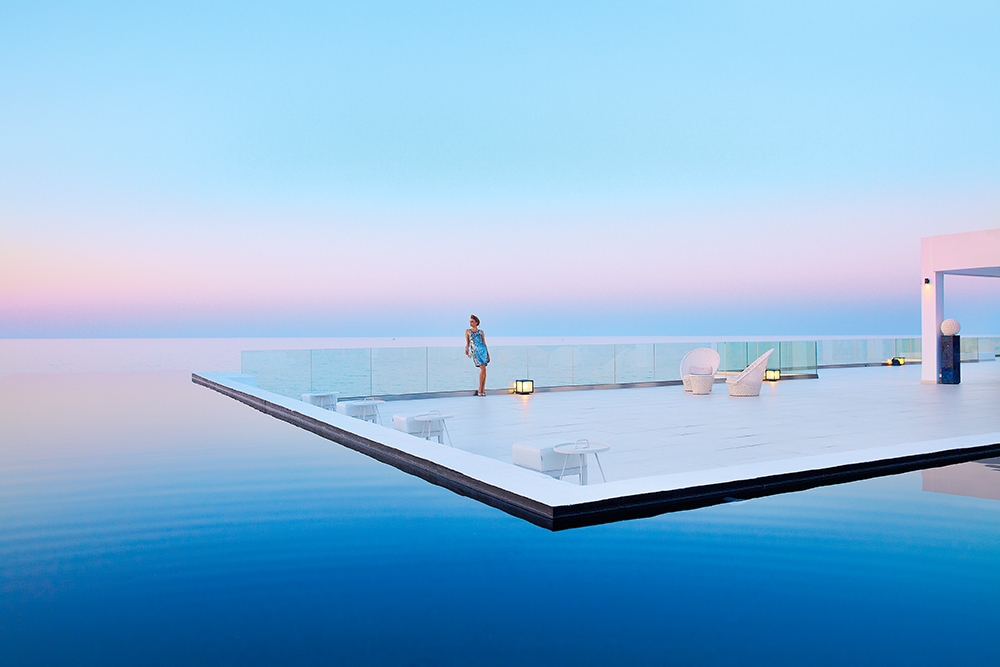 And for those with an interest in cave exploration, head for the cliffs at Matala bay and discover the artificial caves dating back to the Neolithic Age. Used as tombs in the first and second centuries, one of the caves, known as Brutospeliana was, according to legend, visited by Brutus, the Roman general.

I prefer to spend some time relaxing in the sunshine and I as have a penchant for an afternoon snooze, the soft sandy beach and the gentle waves of the warm Mediterranean Sea lapping the shore of Matala bay, provided the ideal spot. As I reclined on my comfortable lounger the words of Nikos Kazantzakis, who was born in Heraklion in 1883 and wrote Zorba the Greek, came to my mind…