Amid the slopes of Southern Africa, a great variety of remarkable and beautiful birds await you, of which I have seen approximately 278 during the past five years. These are my most memorable bird sightings in the bush, not in any specific order. 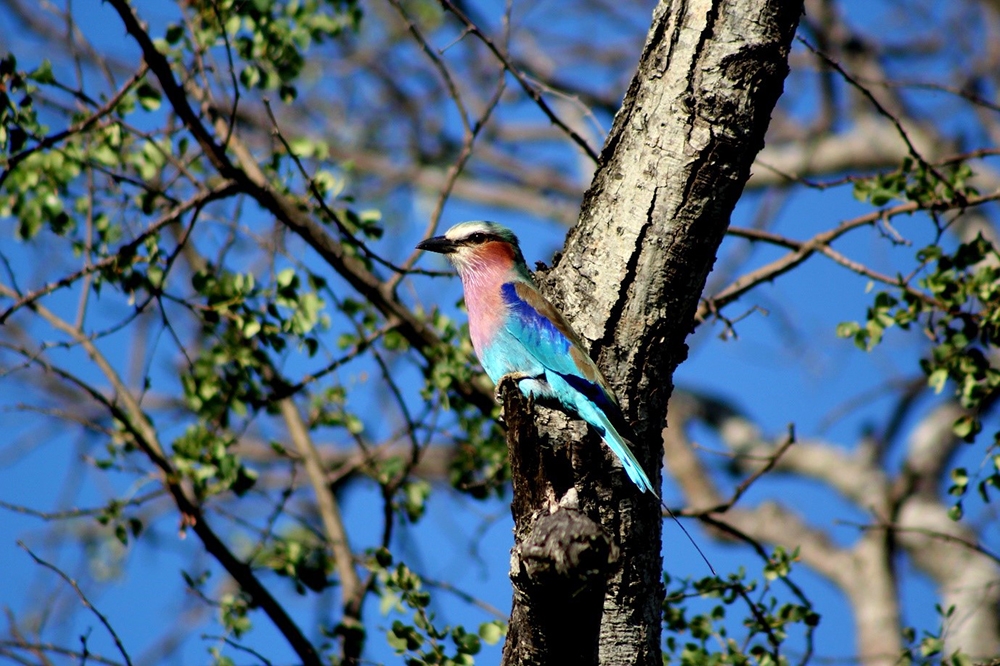 Amongst my favorite birds to photograph is the Lilac-breasted Roller, standing out with its striking colors. In-flight, you can see even more of the turquoise, blue, brown, green, and purple hues that contribute to its attracting coloration. They usually appear in pairs or alone, and they are commonly found sitting on telephone lines or other noticeable places. Males and females have identical plumage colors, and I spotted this roller perched in a tree at RockFig Safari Lodge in the Timbavati. 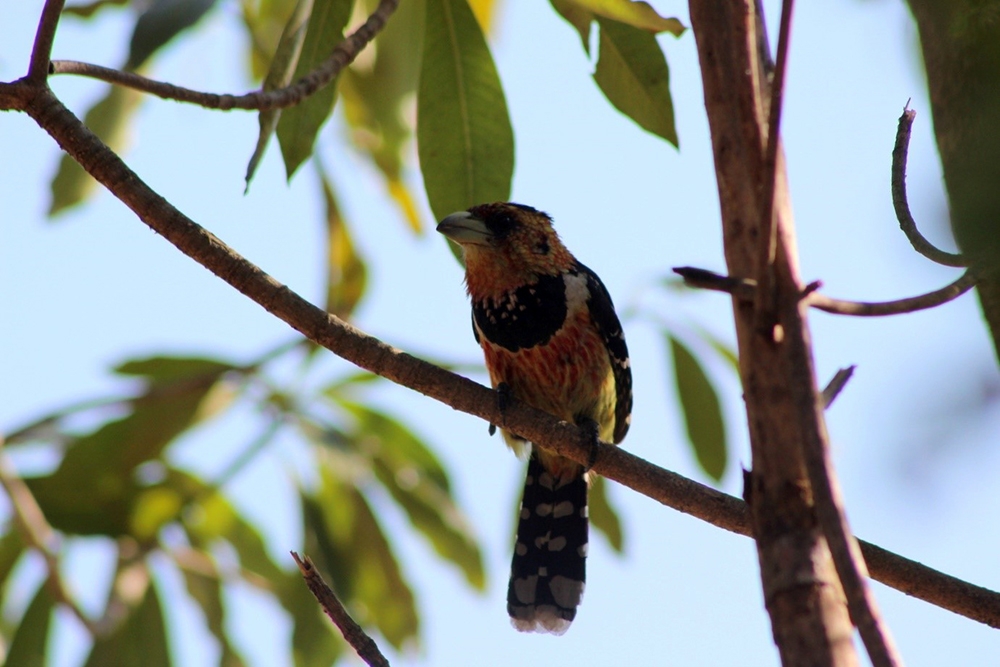 I asked the game ranger to stop the vehicle when I saw this colorful bird at Chitwa Chitwa in Sabi Sand, which is a Crested Barbet. It stands out with its red forehead, its yellow and black body complimented by splashes of orange and white as well as a black fringe. The male makes a “trrrrrrrrrrrr” sound, and the female replies with a repeating “puka-puka.” They can be found in pairs or solitary. The amount of red “scales” on the head and neck differ; there are less on the females and juveniles. 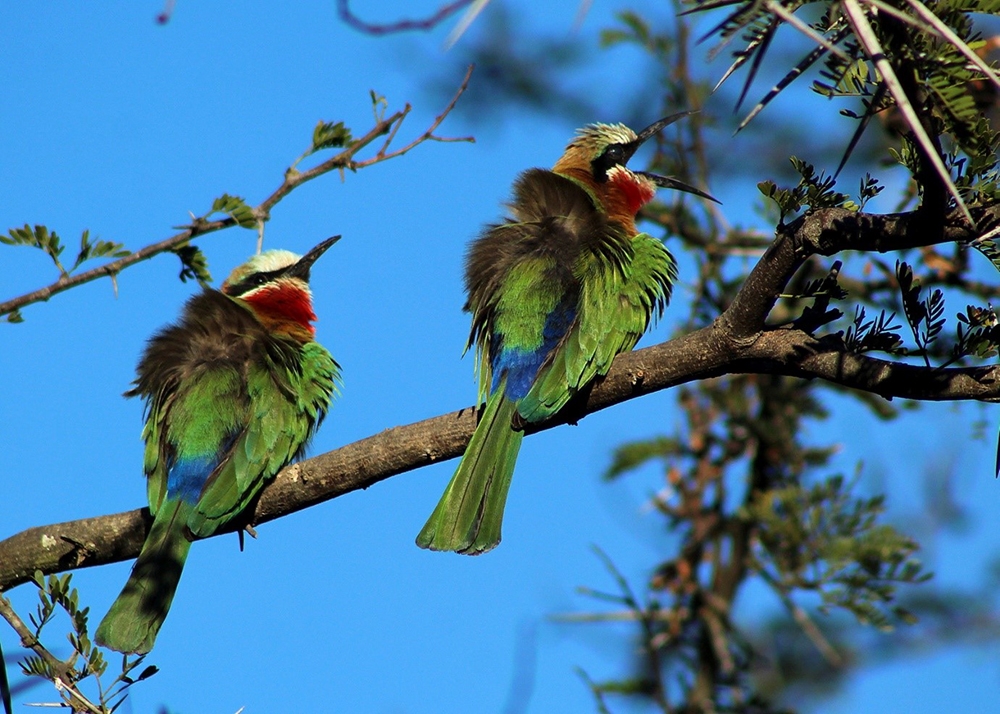 The White-fronted Bee-eater is yet another bird that seems to have fallen into a few buckets of bright paint, exhibiting a white head, green tail, and a red chest. The bottom of its tail is a prominent blue. This species of bee-eater doesn’t have the lengthened middle tail feathers that the rest of the bee-eater family does. In-flight, you can see that it has a beautiful shade of cinnamon on the bottom of its wings. We found these two adjacent to their nests that are carved into a mudbank at Kwandwe Private Game Reserve in the Eastern Cape. 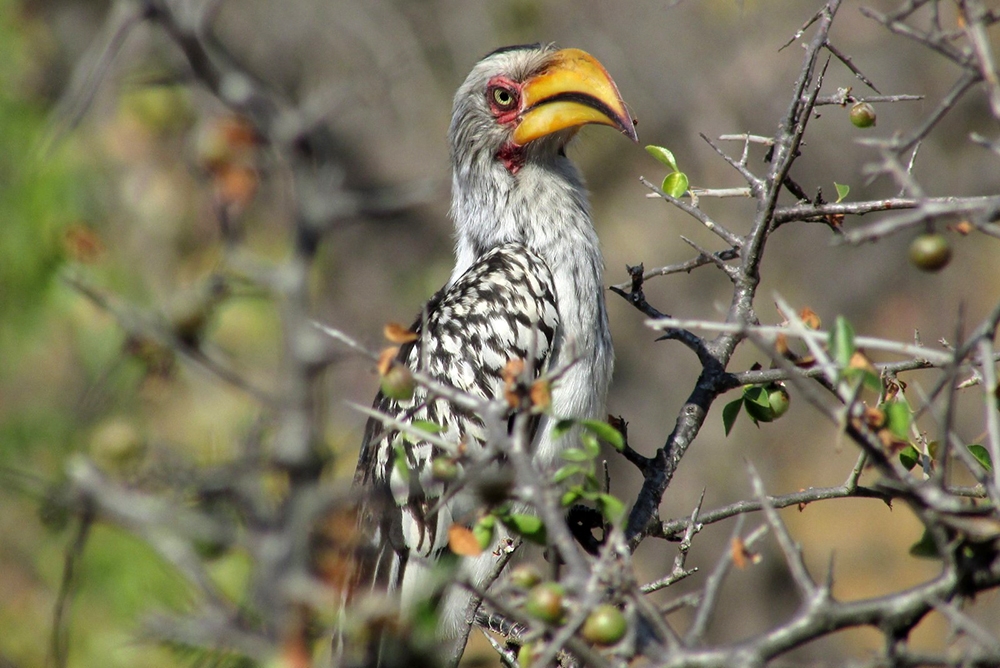 The Southern Yellow-billed Hornbill, renowned from the movie The Lion King, being Zazu in the film, will undoubtedly catch your eye. Their large yellow beak makes them unmistakably interesting and hard to miss, as I encountered at Hoedspruit Endangered Species Centre’s Khula’s Cottage. They have a black and white body with red around their eyes and additional red markings around the base of their beak. Their call is an amusing “Tok Tok Tok Tok Tok Tok.” 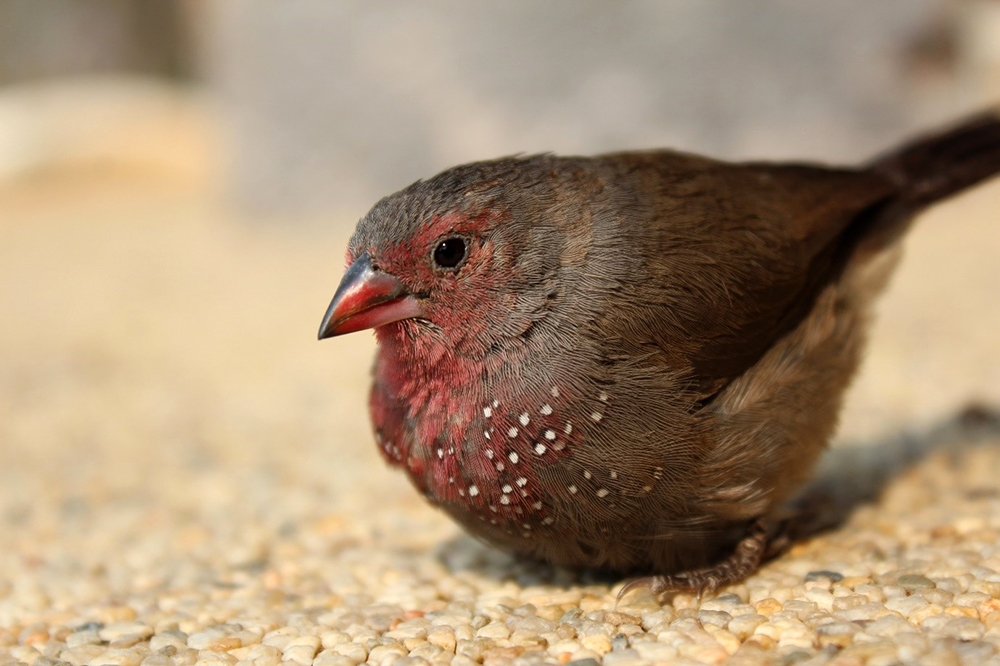 I discovered this extremely cute Brown Firefinch on our veranda at Matetsi Victoria Falls. Found in thickets and reeds near water, they seem largely susceptible to heat as we found out on a hot summer’s day in Zimbabwe. We had to give two of the water to help them stay hydrated. They are small brown birds with an evident red chest and face with white spots. They usually live in large flocks and make up a choir of chirps and cheeps. 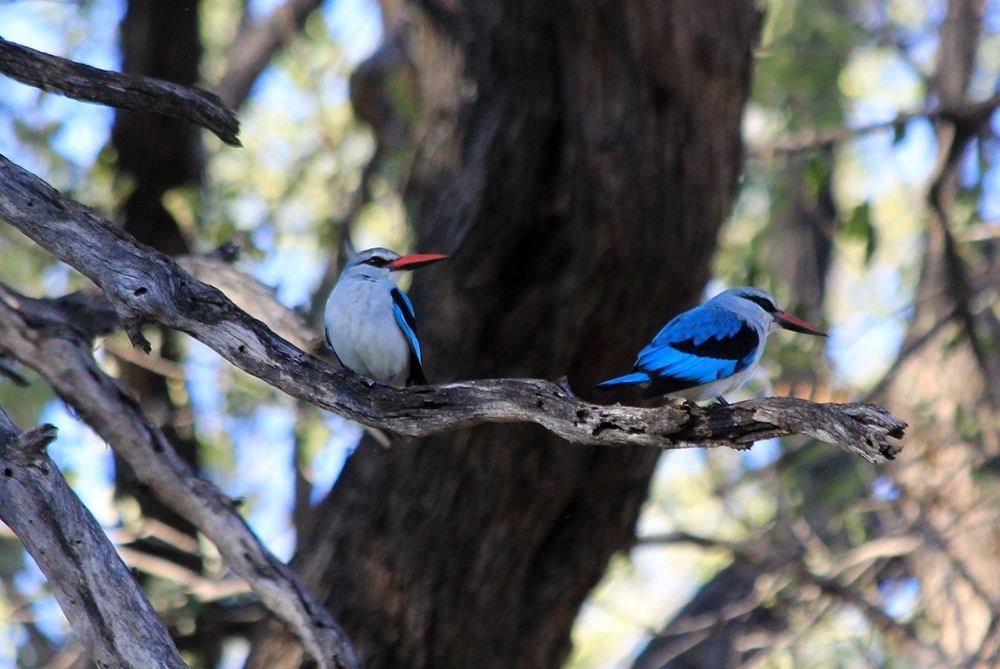 Another charming bird is the Woodland Kingfisher. Its blue hue catches the eye very quickly, and so does the bright red and black beak. It is a strange occurrence for beautiful birds to have an equally lovely sound, but Woodland Kingfishers have quite a musical “trrp-tttttrrrrrrrrrrrr” sound. When it flies, it pops out from its surroundings with its wings flashing blue. These two were spotted at Sanctuary Retreats Chief’s Camp in Botswana.

These brown and yellow birds known as the Cape Weaver are commonly found in savanna and grasslands. They breed in colonies in trees near rivers or large bodies of water. The males build the nests and are bright yellow while the females are dull brown. The females can be identified by a yellow spot on the top of the base of their tail. At Morukuru Ocean House, this attention-grabbing male was constructing a nest in the hope of attracting a suitable female.

All of these birds are present in the Southern part of Africa, which include Botswana, Namibia, Mozambique, South Africa, and Zimbabwe.

*** Views expressed are the author’s own.

Shops return to rural Sweden but are now staff-free