Coronavirus is hitting Los Angeles’ Skid Row — one of the largest entrenched homeless communities in the country — particularly hard, with one shelter there recording at least 56 positive cases among residents and staff.

Rev. Andy Bales, the CEO of Union Rescue Mission, told VICE News that about 75% of his shelter’s cases were asymptomatic. And many were only unearthed after testing was made more broadly available to Skid Row’s nearly 5,000 residents. The mission reported its first case March 28, but conducted more rigorous testing in recent days among staff and residents who consented.

His shelter typically cares for about 1,000 people, but it has reduced its capacity since the crisis by moving some people to hotels.

“There may be a lot of asymptomatic people out on the streets of Skid Row,” Bales said

Los Angeles Public Health Director Barbara Ferrer said Tuesday that the county was in the process of expanding “investigations,” including identifying people who need testing and quarantine, to eight shelters. California expanded its testing guidelines to include asymptomatic people living or working in nursing homes, jails and prisons, homeless shelters.

In recent weeks, shelters in Boston, Dallas, Salt Lake City, and San Francisco have reported similarly large outbreaks, usually only after they’ve managed to test dozens of their residents — symptomatic or not — as a precautionary measure. And citywide outbreaks among homeless people have also been reported in places like New York where, as of Monday, 617 COVID-19 cases had been recorded among the city’s nearly 80,000 homeless. With the cases among homeless people growing at an alarming clip, cities including New York and San Francisco have moved to get some homeless people out of shelters and into hotels in an effort to contain the spread.

There’s little data on just how widespread coronavirus is among homeless populations in the United States, but at least 1,335 cases have been recorded among homeless people living in shelters and outdoors across 26 cities in recent weeks, according to a limited VICE News analysis of acknowledged outbreaks.

Homeless people and advocates warned this would happen at the onset of the COVID-19 outbreak, when cases first surfaced in two areas dense with street homelessness: California’s Bay Area and Seattle. And, in the past several days, they’ve heightened calls for more widespread coronavirus testing in shelters across America to show just how much these vulnerable populations are at risk of contracting and spreading a contagious respiratory illness. A coalition of more than 500 New York-based front-line doctors and nurses also pleaded for universal testing last week, warning that “the magnitude of COVID-19 among the homeless population is under-recognized.”

“Thousands of workers every day continue to go into work and serve some of the most vulnerable people in San Francisco,” San Francisco Supervisor Matt Haney said in a news conference this week, introducing a measure for more testing in shelters. “And thousands of San Franciscans continue to live in crowded shelters and congregate living sites like SROs. All of them lack something that should be easily available, which is testing.”

For one, so-called “congregate” shelters make it difficult to follow social distancing guidelines, since residents often sleep in tight quarters packed end-to-end with beds. Then, during the day, homeless people are usually turned out to the streets or to their low-wage jobs. And even if a homeless person isn’t living in a congregate shelter, there’s a good chance they’re at greater risk for an illness like COVID-19, anyway, either because they’re living with a pre-existing condition, or just generally unhealthy because of their lack of access to medical care.

The outbreaks in shelters nationwide are impacting essential workers, too. A driver and former resident of the Union Rescue Mission died of coronavirus earlier this month. Shelter providers in New York City have pleaded for more personal protective gear to protect both staff and residents.

“Plead for the testing, and meanwhile, wear all the protective gear you can to stay out of harm’s way because this COVID-19 is a ferocious, mysterious monster,” Bales, of the Union Rescue Mission Shelter, said.

Cover: People line up to get tested for COVID-19 in the Skid Row district Monday, April 20, 2020, in Los Angeles. (AP Photo/Marcio Jose Sanchez) 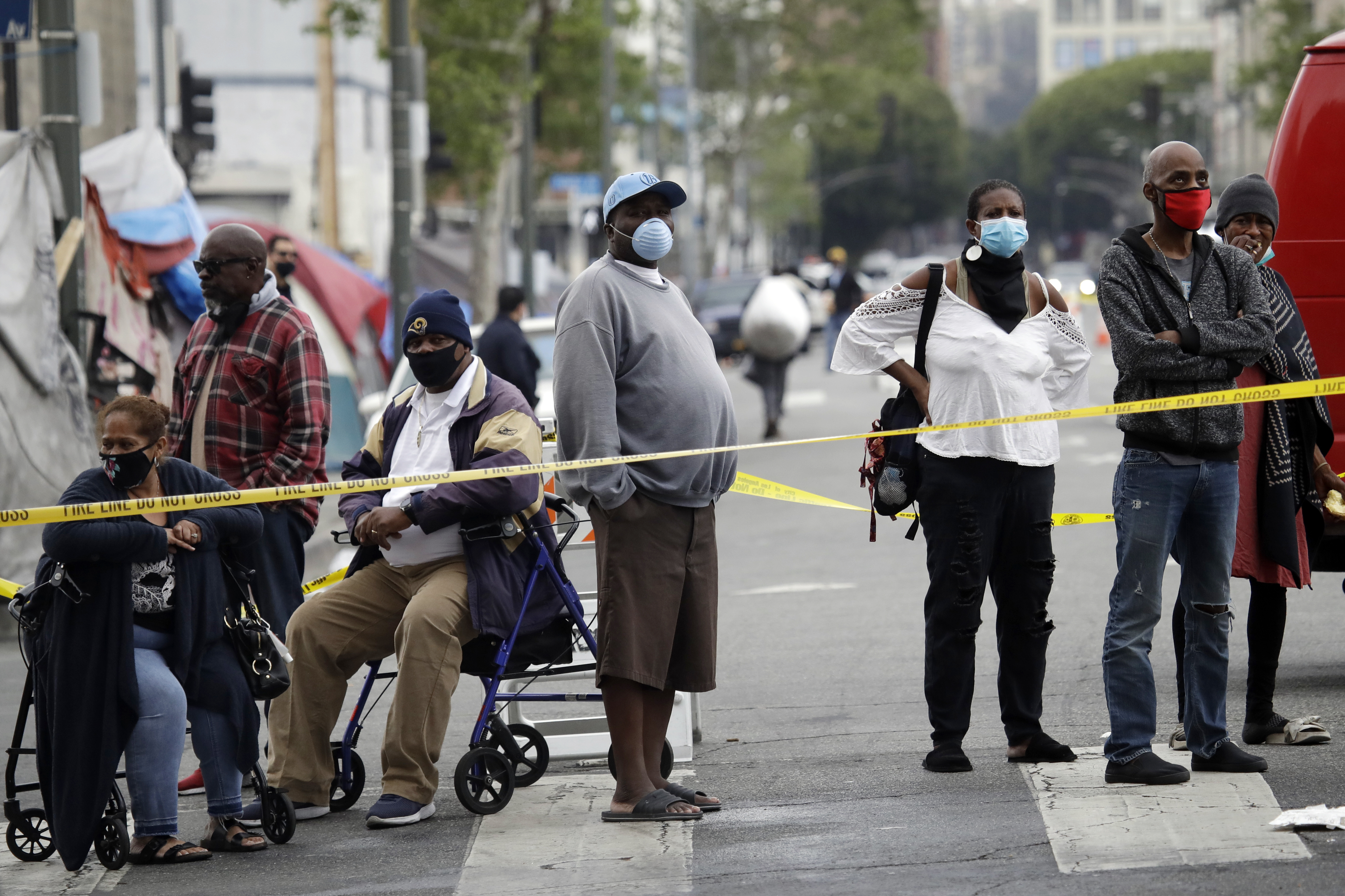