Berlin’s wild anti-lockdown protests took a decided turn to the far right on Saturday as extremist activists — and reps from Germany’s far-right parties, for the first time — came out in big numbers to swell the crowds to about 1,000 people, double the size of last weekend’s protest. Dozens of people were arrested, versus just two a week ago.

The so-called “hygiene demos,” defying a nationwide ban on gatherings of more than 20 people, have been held for the past few Saturdays outside Berlin’s iconic Volksbühne theater, drawing together an eclectic coalition of conspiracy theorists from the political left and far-right. Their numbers spiked to 1,000 Saturday, while about 20 left-wing counter-demonstrators turned up.

While the protests are organized by a fringe group that considers themselves left-wing anticapitalists, they’ve increasingly attracted support from far-right groups and activists.

Extremism experts monitoring the protests said that Saturday’s demonstrations were the first time politicians from far-right parties turn out to show their support, with two politicians from the right-wing populist Alternative for Germany (AfD) in attendance, as well as a senior representative of the National Democratic Party (NPD), a fringe ultra-nationalist political party typically described as a neo-Nazi group.

READ: German neo-Nazis are trying to go mainstream with MMA and music festivals

Kira Ayyadi, a researcher at the far-right monitoring group Amadeu Antonio Foundation, told VICE News that the presence of the politicians was a sign of the growing far-right flavor of the protests.

“It is concerning that this event is growing, especially when you look at the mix of the people,” she said. “There were a lot of right-wing protesters at the demonstration.”

Footage from Saturday’s protests showed large crowds chanting “We are the people,” and police arresting attendees for violating social distancing guidelines. According to reports, dozens of people were arrested, compared with just two at the previous week’s rally.

The Berlin branch of the NPD tweeted that the lockdown had put the country’s Basic Law “out of action,” prompting its activists to protest the restrictions. “Police repeatedly intervened unnecessarily and picked out ordinary citizens,” it tweeted. The AfD, Germany’s main opposition party, has accused the government of overstating the risk posed by coronavirus and accuses the government of exaggerating the risk posed by the virus called for an immediate return to work.

Many protesters carried signs identifying themselves with various conspiracy theories, reflecting what experts say has been a proliferation of paranoid theories about coronavirus since the pandemic took hold. That’s despite Germany faring much better than some large European neighbors; the country has recorded 5,880 deaths, compared with more than 26,000 in Italy.

“We are not afraid of your [New World Order] lie virus,” read the text on one protester’s vest. “How could the masses under Hitler be manipulated so stupidly? Today’s corona suckers give us the answer,” read another’s T-shirt.

Cover: Police officers detain a person with bandages around the face, during an illegal demonstration against restrictions and measures to prevent the spread of coronavirus in Berlin, Germany, Saturday, April 25, 2020. The poster reads, “Intimidated disenfranchised remote controlled from thinker to a data donor.” (AP Photo/Markus Schreiber) 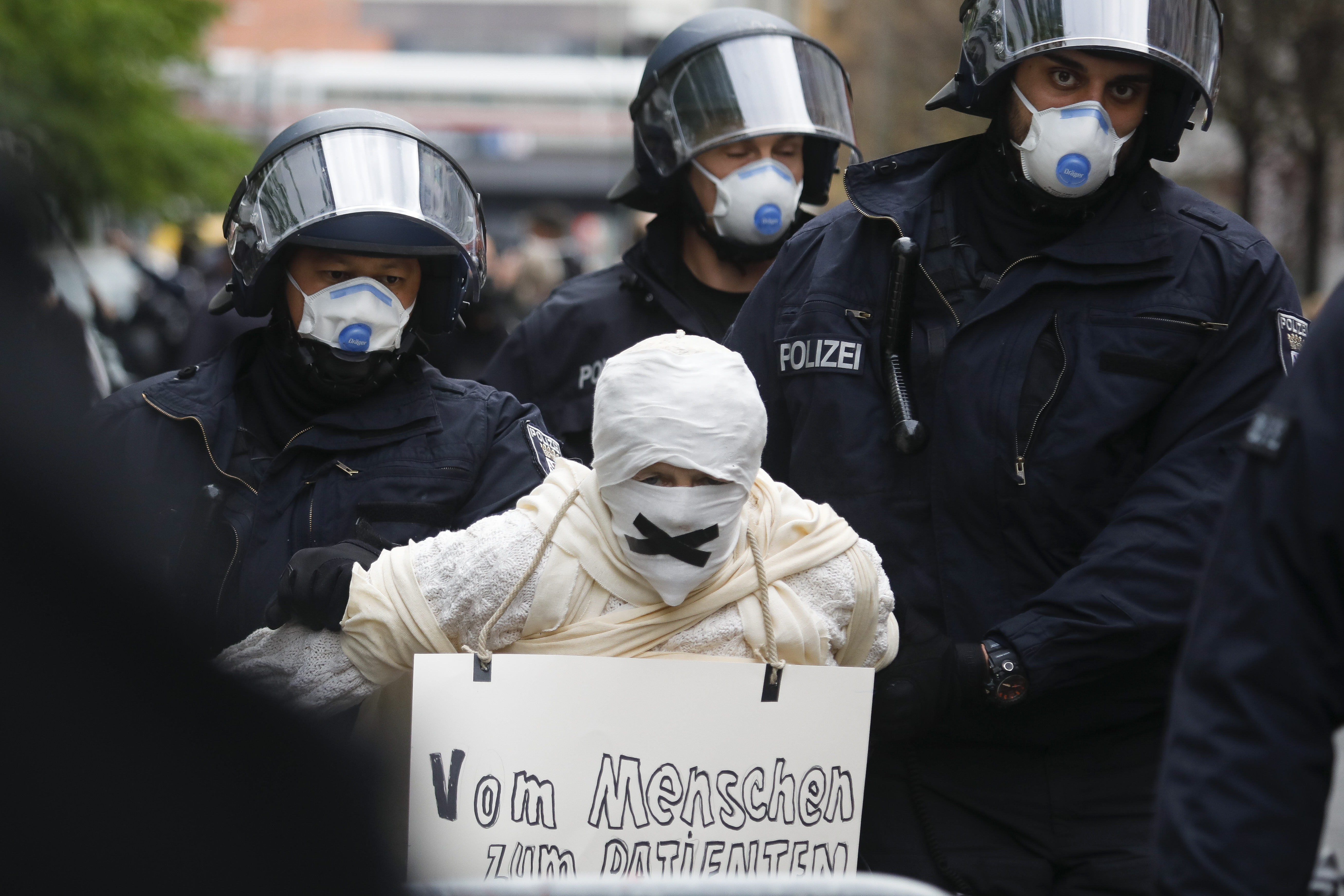 6 Tips to Worry Less When Moving Your Home